Love Island 2021: Olivia Attwood reveals dumpings went on until 4am

Former Love Island star Olivia Attwood has recalled what it was like taking part in recoupling ceremonies on the show, revealing that dumpings could go on for an exhaustingly long time into the early morning.

The dumpings on Love Island often feature the most shocking moments of the show, with the most recent one on the 2021 series resulting in Hugo Hammond making scathing remarks about Toby Aromolaran’s treatment of Chloe Burrows, astonishing viewers beyond belief.

Olivia starred on Love Island in 2017, entering on the very first day and making it all the way to the final, where she and Chris Hughes finished in third place.

While looking back on her time in the villa, Olivia said that the dumpings, which are always accompanied by aptly dramatic music, are ‘worse in real life’.

‘Some of the dumpings can take such a long time,’ the 30-year-old told OK!.

‘We did some recouplings that went on until three or four in the morning. We wouldn’t know the time but the producers would be telling us we had to go to bed because it was the early hours of the morning.’ 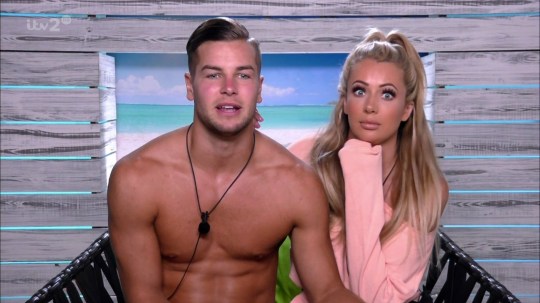 Chris and Olivia finished in third place on their series of Love Island (Picture: ITV)

What’s more, in real life the recoupling ceremonies are carried out in complete silence, which one can imagine makes the situation even more intense.

‘They’re awful, they’re worse in real life. On TV, they fill the silences with music but it is so deadly silent, all you can hear is the crackling of the fire,’ Olivia said.

‘The villa is in the middle of nowhere so when you’re stood there waiting, you can literally hear a pin drop. It’s so intense.’

Olivia and Chris’ relationship was short-lived after Love Island, with Olivia becoming engaged to footballer Bradley Dack in 2019.

On June 6, Bradley shared a romantic picture on Instagram of him and Olivia on what would have been their wedding day.

‘Happy would be wedding day to the other half. It wasn’t meant to be this year.. but I can’t wait too make some more memories before we can do it next year [sic],’ he wrote in the caption.

On Sunday’s episode of Love Island, it looks like things are going to be shaken up by the imminent return of Casa Amor, which will see a new cohort of islanders join the show to stir the pot.

Will any of the couples end up in jeopardy? Or will they prove their commitment to one another?

Love Island returns tomorrow at 9pm on ITV2 and is available to watch on ITV Hub.