Teddy Soares could be moving on after Faye Winter savagely dumped him (Picture: ITV)

Not long after strutting into the villa with fellow bombshell Aaron Simpson, medical student Priya made a beeline for newly single Teddy and invited him on a date.

The pair hit it off immediately while bonding over their shared interests, and Teddy melted hearts as he admitted: ‘It’s nice to be wanted or feel wanted.’

Naturally, he was referring to the frosty relationship between he and Faye after their explosive argument last week, which led to her dumping him.

After lots of laughter, Teddy told Priya at the end of their date: ‘Yes, we’ll continue that conversation,’ suggesting his door was open.

However, Faye was seen stressing on the terrace and quipped: ‘Stress gives me wrinkles, wrinkles means I have to get more botox and botox potentially means that my face will drop.’

In one slightly awkward moment, Faye and Priya surprisingly had a heart to heart about Teddy with his ex joking: ‘Right now I can’t see I’m his greatest fan but I might get a foam finger out later.’ 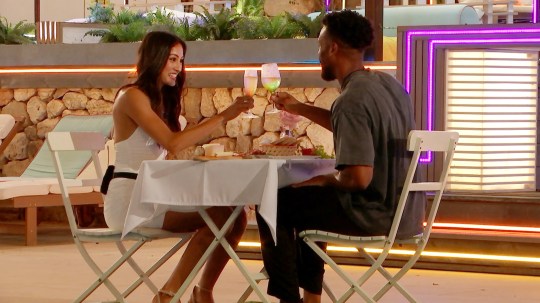 Priya and Teddy hit it off on their date (Picture: ITV)

She added: ‘Obviously it’s not the greatest feeling I’ve had in my lifetime but it’s so fine.’

When Priya questioned her being so chilled out about Teddy moving on, Faye insisted: ‘I would even go as far as saying it’s fantastic.

In the beach hut, Priya said: ‘I feel like she’s a lioness and trying to mark her territory with Teddy. I might even say a bit of jealousy.’

Faye also said in her own confessional: ‘She seems really lovely and really beautiful, a good job and someone you want to take home to your mum.

‘I’m not someone you’d want to take home to your mum probably. Karma has come to get me.’

Later in the night, Teddy admitted he still had feelings for Faye and told Priya: ‘If she wants it, she’s also got to give me something.

Despite Fayeâs downfall this week, âStress gives me wrinkles, wrinkles means I have to get more botox and botox potentially means that my face will dropâ is pretty iconic ð #LoveIsland

On the prospect of getting to know Priya, he replied: ‘I don’t think it would be fair because my head at the moment is so into that situation, it’s just not going to feel right me getting to know new people.’

It seems his feelings might be mutual as Faye later confessed: ‘I’m pretty terrified, me being me I’m stubborn… then my life came crashing around me in the cinema night.’

‘I reacted in maybe the wrong way… no I didn’t.’

Millie chimed in: ‘You might have overreacted,’ to which Faye quipped: ‘Great you’re telling me this now three days later but you didn’t want to tell me this at the time.