Love Island: What tattoos does Danny Bibby have and what do they mean?

Love Island fans are eagerly anticipating tonight’s episode – which will see two contestants get dumped from the villa, and the arrival of three bombshells.

Among those at risk of leaving the show tonight is tattoo-loving 25-year-old Danny Bibby, who is currently coupled up with Lucinda Strafford, but has been grafting AJ Bunker.

Danny fans are hoping that he will survive the dumping as they have an ink-ling he would be a perfect fit for new girl Abigail Rawlings – who is a tattoo artist.

If you’re wondering what his body art means then that makes tattoo of us.

Here is all you need to know.

How many tattoos does Danny Bibby have?

Bombshell Danny is covered in tattoos – we don’t know exactly how many. 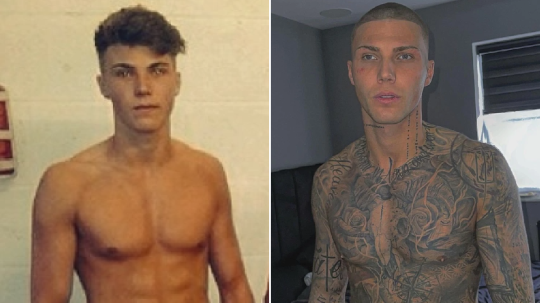 Danny before and after his tattoos (Picture: Instagram/@dannybibby_)

Judging by his Instagram, Danny got his first tattoo when he was around 18 or 19 years old.

He looks totally unrecognisable without his signature tats.

What tattoos does Danny Bibby have and what do they mean?

He has opened up about what tattoos he has – a mix of quotes, important symbols, and his lucky number.

Of his body art, Danny said: ‘Some are quotes which inspire me every day. I’ve got my clothing brand logo so I can see it every day.

‘That motivates me to keep doing it. I’ve got 13 which is my lucky number.’

As well as these, we can see an outline of Great Britain, with the words ‘England’ and what appears to be ‘Scots’.

There is a large rose on his chest, clocks, and compasses, plus the side of a woman’s face on his torso. He also appears to have the word ‘fate’ written in large letters across one arm.

A tattoo on his neck reads ‘todo sucede por una razón’, which is Spanish for ‘everything happens for a reason’.

Danny also sports a tattoo of a key and five slashes, which he said on Instagram represent ‘key people in my life, 5 slashes for each one of the boys’.

On his back, the plumber has chosen a detailed tattoo of Roman emperor, Titus. 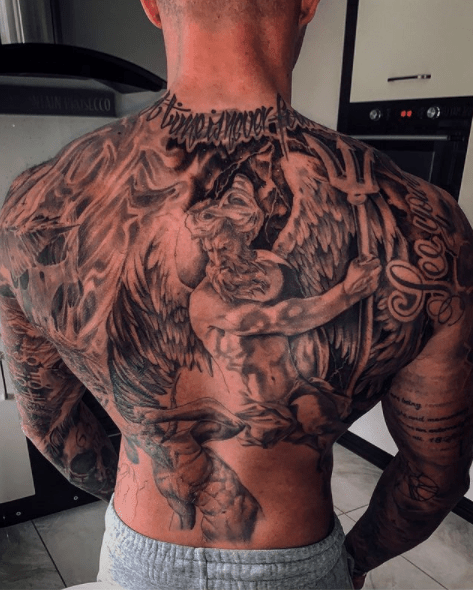 Danny has a pretty impressive back tat of Titus (Picture: Instagram/@dannybibby_)

Other tattoos include Steve Stifler from American Pie, a scene from the Dark Knight, and the numbers 1996 – the year he was born.

The Scottish Sun also reports that a number of tattoos include images of legendary boxer Muhammad Ali, Peaky Blinder’s Tommy Shelby, rapper Post Malone, as well as a portrait of his beloved mum.