Aaron once met Christina Aguilera on a night out (Picture: ITV2/ Getty)

Aaron Francis has revealed he once looked after Christina Aguilera on a night out, but claims her entourage were not that friendly.

The Love Island star, 24, works as a luxury events host and has met many huge stars and some of the royals through his job.

Speaking to Faye Winter and Teddy Soares by the pool on Saturday’s Unseen Bits show, the pair quizzed Aaron about the most famous person he has ever met.

He revealed that it was none other than Xtina, telling them: ‘I looked after Christina Aguilera once. She was quite quiet and she wasn’t the nicest. Her friends were a bit rude as well.’

Teddy then admitted that Christina had been his crush when he was younger, with Faye questioning whether he would choose her over Britney Spears.

Prior to the show starting, a Love Island source told The Mail: ‘Aaron has no real claim to fame, he’s just a normal guy. 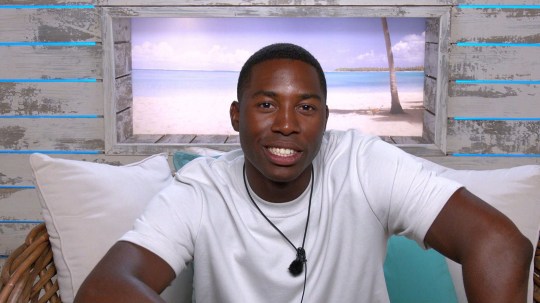 Aaron has met many stars through his job as a luxury event host (Picture:: ITV/Shutterstock)

‘However, his job does mean he sometimes moves in glamorous circles and he gets lots of attention. Bosses think he’ll be a real hit in the house with the girls and also get on with the guys.’

Elsewhere on the episode, viewers saw Jake Cornish prank Liberty Poole as the pair enjoyed a shower together to wash food out of their hair after a challenge.

Liberty was left confused after attempting to wash the shampoo out of her hair, only to find it was just multiplying in lather.

Unbeknownst to her, Jake had been standing behind her pouring more and more shampoo on her head every time her back was turned, as he giggled with Brad McClelland at her confusion.

Love Island continues from 9pm on Sunday on ITV2.