Mary and Aaron left the show together but split soon after (Picture: ITV/REX/Shutterstock)

Love Island 2021 star Mary Bedford announced that her grandma had died during her time on the show recently – and now she’s revealed that the loss had a big impact on her decision to friendzone Aaron Simpson.

Viewers sent plenty of messages of support to the 22-year-old after she announced the sad news following the final last month.

She’s now opened up to fans and admitted that the tragedy impacted her decision to friendzone Aaron during an appearance on Aftersun.

At the time, host Laura Whitmore asked what the future held for their relationship and Mary said: ‘I think we’re just gonna go home, when we’re back in the real world again and things are more normal. We’re going to see how it goes, but I’ve definitely made a best friend in here.’

It surprised some at the time. Now, the Leeds local has said that their romance went no further following the fallout from the family loss.

Taking part in an Instagram Q&A, she was asked: ‘Why did you and Aaron split?!’ 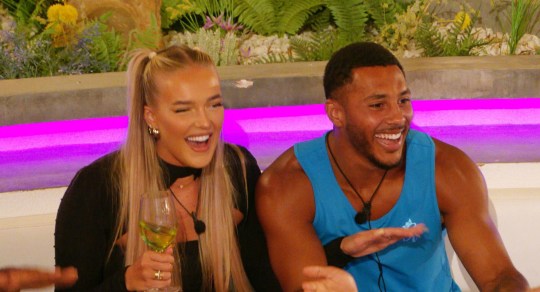 Mary surprised some by friendzoning Aaron on Aftersun (Picture: ITV/REX/Shutterstock)

‘Coming out of the villa and finding out the news about my grandma completely threw me, I’ve never lost anyone close to me so it has been really hard to be honest…’ she replied.

‘A result of this my head is all over the place, and all I knew is I wanted to be back home surrounded by my loved ones.’

She went on to say: ‘Aaron is an amazing person who has been supportive about everything since we left the show but right now there’s no pressure on us.

‘I will always be so grateful we met as he’s a massive part of my Love Island journey, but I’m focusing on getting my head back in the right headspace which is why I haven’t been crazy active since coming out.’

There could still be hope for the pair, when she added: ‘But who knows about the future.’

Mary previously paid tribute to her grandmother after learning she had died while she was in the villa.

‘Our angel on earth is now our angel in heaven,’ she wrote in a touching Instagram post.

‘Coming off the show has been bitter sweet for me as I flew home to go to the funeral of my beautiful grandma who passed away whilst I was in the villa. I’ve been taking the time since the show to mourn, reflect, and be back with my loved ones before returning to my social media.’

Mary added: ‘I want to say thank you from the bottom of my heart for all of the support I have received at this difficult time, I truly appreciate everything.’

Love Island is available to stream on the ITV Hub.