A new official Star Wars poster released during San Diego Comic-Con has hinted at Grogu’s Jedi training with Luke Skywalker following the epic finale of The Mandalorian season 2 on Disney Plus.

In The Mandalorian, Din Djarin (Pedro Pascal) sets off on a journey to protect The Child, aka Baby Yoda, aka Grogu, at all costs, which means finding a Jedi who can provide Grogu with the training he needs to master his powers with the Force.

In the final moments of the season two finale, one of the most legendary Jedis in the galaxy, Luke Skywalker (Mark Hamill), makes an unexpected appearance, as he and R2D2 take Grogu under their wing.

While Grogu’s fate is left unknown, with viewers hoping they will find out more about what happened to him next in season three, a new poster may have provided fans with some key information on Grogu’s Jedi training progress.

The officially licensed poster from Shop Trends, which was illustrated by Russell Walks and is titled ‘Size Matters Not’, shows Grogu using the Force to levitate different parts of a lightsaber.

Luke, who’s standing next to him appears to be using the Force to levitate a yellow Kyber crystal, which would power the lightsaber.

Considering Mandalorian fans have not yet seen Grogu wield a lightsaber, does this mean that The Child will come into possession of a yellow lightsaber at some point in the future?

Perhaps this may also mean that Grogu will be the one to assemble his lightsaber himself as his powers continue to grow. 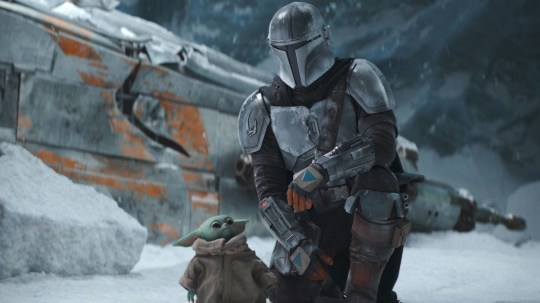 Will Grogu and Din Djarin ever be reunited? (Picture: Lucasfilm/Disney)

It’s uncertain whether Luke will return in The Mandalorian after his cameo appearance, which saw Mark be de-aged to reprise the younger version of the character.

After watching the development of Din and Grogu’s father-son relationship, fans are no doubt hopeful that they will cross paths on their various adventures.

In addition to The Mandalorian season three, another Star Wars spin-off is also in the works, The Book of Boba Fett, which will star Temuera Morrison as the iconic bounty hunter and Ming-Na Wen as lethal assassin Fennec Shand.

Meanwhile, Ewan McGregor is reprising his role as Obi-Wan Kenobi from the prequel trilogy in his own eponymous show, which will see Hayden Christensen return as Anakin Skywalker, known across the galaxy as the deadly Darth Vader.

The Mandalorian is available to watch on Disney Plus.