Married At First Sight UK’s Dan and Matt are set to be confronted by another hurdle in scenes due to air tonight as they discuss living arrangements on their honeymoon.

After their significant age gap presented a potential obstacle on their wedding day, a spoiler clip shared exclusively with Metro.co.uk has revealed that living in England would present problems for one-half of the show’s first gay couple.

‘I am being honest and I’m being truthful to myself, it is a bit of a dealbreaker,’ Dan says, sharing his need to live in Ireland.

‘I’m a city boy and also I’ve got my mum and dad and my family and I’m so close to them,’ Matt responds. ‘The prospect of doing something like that is quite daunting.’

Speaking to the cameras privately, Matt continues: ‘Hearing Dan say that living in Ireland is a dealbreaker for him is surprising.

‘So far with Dan it’s been amazing, and I do feel he’s definitely somebody that I could fall in love with, but I’m not just going to up sticks and leave my life and move to Ireland.’


The pair discuss living situations on their honeymoon (Picture: E4)

Sharing his reservations, Dan adds: ‘Things have been going so well with me and Matt, but part of the reason my last relationship broke down is because the long distance didn’t work for us.

‘I am scared and I hope this doesn’t end things.’

Could clashing over where to settle throw a spanner in the works for the pair?

Dan and Matt made history for the LGBTQ+ community as they married in the second episode of the new E4 series. 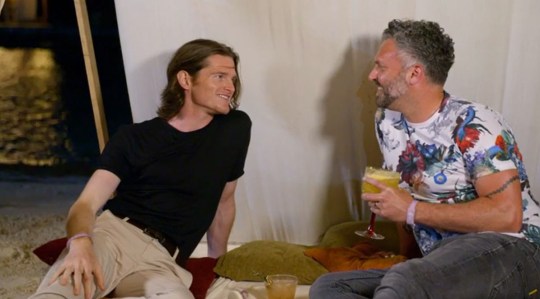 The pair enjoy quality time together in Mexico (Picture: E4)

Matt, 39, admitted he was keen to find love and settle down with children while his husband Daniel, 27, said he was looking ‘for a best friend and a lover’.

Their wedding ceremony went off without a hitch, as the newlyweds shared their first kiss and Daniel expressed his attraction to Matt, admitting: ‘So far great personality, stunning personality, overall package – I want to unwrap it.’

However after posing for their wedding pictures, Matt asked the all important question: ‘How old are you?’ to which his younger hubby confirmed the 12-year age gap.

While it wasn’t a problem for either of them, Matt’s mum later pulled him aside at the reception to express her concerns.

‘I don’t think Daniel is Matt’s usual type but they haven’t come home because I don’t think it’s lasted,’ she explained to the camera.

Freya left the show on Tuesday (Picture: Channel 4)Viewers were left distraught during Tuesday’s Great British Bake Off, after Freya...

When does Autumnwatch 2021 start on BBC Two?