The newlyweds jetted out to Mexico after tying the knot in front of their friends and family in the UK, without having ever met each other.

During the wedding reception, Nikita admitted Ant wasn’t her type or usually what she ‘goes for’.

Well on their honeymoon, tensions between the couple only heightened after Ant grew tired of Nikita obsessing over her looks and whether he found her attractive.

While lounging on the beach, the pair had words after Nikita continually asked if he liked her boobs and bum, to which he reluctantly massaged her ego.

Nikita insisted it was all ‘banter’ before storming off the beach, and they still hadn’t resolved their issues by the evening.

After spending time apart, the pair returned to their hotel room where Nikita explained: ‘When I was trying to explain my point of view earlier you said you didn’t believe us.’

Ant replied: ‘From my perspective it never felt like banter,’ to which Nikita shot back: ‘You’re like my ex sometimes.’ 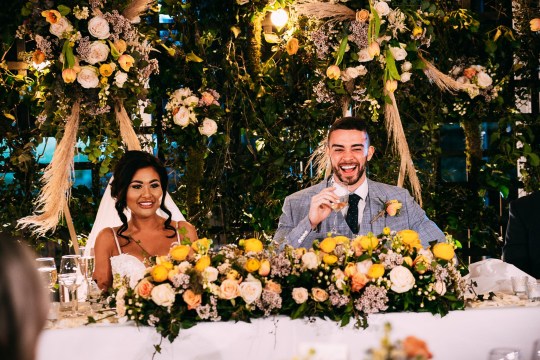 The couple tied the knot without ever meeting (Picture: Channel 4)

The 26-year-old continued: ‘Even if you believed I was seeking validation, it’s harmless.’

Nikita continued: ‘Don’t even answer us walk into another room, I don’t care. I just ramble s**t that’s me as a person.’

Her new hubby said: ‘Sometimes I think you genuinely think i’m checking you out and I’m not at any point.’

Speaking to the camera, she said frustrated: ‘He seems to be backtracking on that, makes me think he’s been bull*******g the whole time.’

Back in the room, tensions escalated as Ant said: ‘I’m very polite… you want me to be open and honest as long as it suits you what the answer is.’

At this point, Nikita saw red and hurled her coffee cup at Ant while shouting expletives as he hit back: ‘You’ve been single five minutes you’re not over your boyfriend.’

‘You freak – put me in another room, I am not sitting with that knacker,’ Nikita told producers.

The next day, both Ant and Nikita had time to reflect on the situation separately and came together for a heart-to-heart.

Fortunately, they were able to clear the air and bond over their shared experience of losing close ones, with Ant’s mum dying when he was young and Nikita suffering the death of her grandmother last year.

‘It’s safe to say we’re in a better place at the moment,’ Ant said after their chat.

Nikita added: ‘I feel like a huge weight has been lifted off our shoulders since that conversation. I feel like it’s a much better vibe now.’