Marvel’s What If: Release date, plot, cast and characters

Marvel’s latest series, What If…?, is soon going to drop on Disney Plus, boasting a star-studded cast from across the MCU.

With the release date of the show arriving shortly after the finale of Loki – which teased the mayhem of the multiverse – fans can’t wait to see how the nine episodes will unfold, as the tale takes inspiration from the comic book series of the same name.

The trailer for What If…? gave fans just a taste of the chaos to come, as superheroes including Black Widow, Spider-Man and Doctor Strange face unexpected twists and turns.

While several of the original actors from the MCU are reprising their roles, including Hayley Atwell as Peggy Carter and the late Chadwick Boseman as T’Challa, some have been replaced with different voice actors.

So what is What If…? about, when is it being released and who is in the cast?

What is Marvel’s What If about and is there a trailer?

What If…? explores what would have happened if various Marvel events had unfolded in different ways or if certain characters had gone down diverging paths.

For example, what if Peggy Carter was the one injected with the super-soldier serum rather than Steve Rogers, thus becoming Captain Carter instead of Steve adopting the persona of Captain America?

On another note, what if T’Challa, who originally went on to become Black Panther, was abducted by the space-based Ravagers as a child, resulting in him becoming Star-Lord, instead of Peter Quill?

During a recent press conference, What If…? executive producer Brad Winderbaum said that it’s ‘no coincidence that the show picks up right after Loki’, with the recent Disney Plus series about the God of Mischief ending with the timeline splitting, teasing the chaos of the multiverse.

‘The multiverse has erupted in every possible direction,’ he said, adding that the first animated series released by Marvel Studios ‘gives us a chance to explore that’. Interesting…

The What If…? trailer introduces viewers to some of the scenarios they’ll have to wrap their heads around when they watch the show, including what would have happened if Killmonger had saved Tony Stark’s life, the arrival of zombie versions of Captain America and Iron Man, and Scott Lang’s head appearing in a jar.

Yep, there’s a lot to unpack.

What’s the What If? release date and how many episodes are there?

What If…? premieres on Disney Plus on Wednesday August 11, with episodes being released on a weekly basis.

There are nine episodes in total. 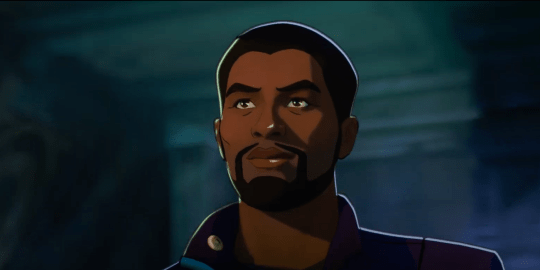 T’Challa goes on a very different journey in the series (Picture: Marvel Studios/Disney Plus)

Who is in the cast and who are they playing?

What If…? features several of the original MCU actors reprising their roles from the films.

These include Hayley as Peggy Carter, Chadwick as T’Challa, Paul Bettany as Vision, Josh Brolin as Thanos, Karen Gillan as Nebula, Tom Hiddleston as Loki, Samuel L Jackson as Nick Fury, Danai Gurira as Okoye and Angela Bassett as Ramonda… to name but a few.

Some of the biggest Marvel superheroes are being voiced by different voice actors, including Tony Stark, Steve Rogers, Captain Marvel, Spider-Man and Black Widow, with the show not featuring the vocal talents of Robert Downey Jr, Chris Evans, Brie Larson, Tom Holland or Scarlett Johansson.

Earlier this month, Guardians of the Galaxy star Dave Bautista claimed on Twitter that he was never asked to reprise the role of Drax.

GOTG director James Gunn appeared astonished by this claim, replying with a startled: ‘What.’

What If…? premieres on Wednesday August 11 on Disney Plus.