Could there be a The Simple Life revival? (Picture: Getty; Rex)

Nicole Richie has insisted there would need to be a therapist on-site if The Simple Life was ever revived now.

The Simple Life ran for five seasons from 2003 to 2007, following Nicole and best friend Paris Hilton ditch their indulgent life of luxury to slum it like the rest of us.

Should the show ever return, Nicole – who has Harlow, 13, and Sparrow, 11, with her Good Charlotte rocker husband Joel Madden – stressed there would need to be phycological support for the pair because they had to be separated from their phones for so long.

‘It would be hard now because we’re older and we have travelled and we have been everywhere,’ she told Entertainment Tonight.

‘I think that concept was so great because you were able to take people’s phones away for a month.

‘If you took someone’s phone away right now, you’d have to have a therapist on-site and make sure they were OK. No one’s trying to deal with all that, including me. So, I think it would be such a different thing.’ 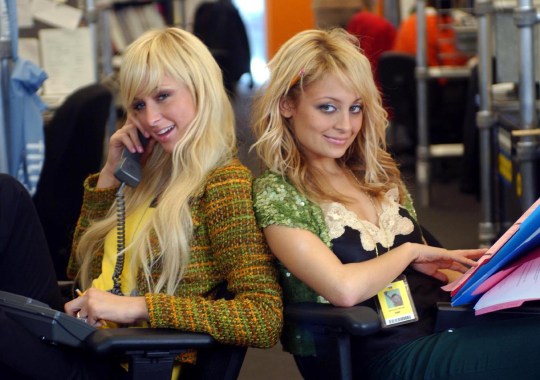 Paris and Nicole spent a month without their phones (Picture: CHANNEL FOUR)

When the series first launched, with the heiresses staying on a farm, working various jobs and living with a family wildly different to their own, there had been nothing else like it. MTV’s The Osbournes and The Real World were arguably the only two reality series to pick up such a huge fan base.

‘It was a completely new concept altogether,’ said Nicole.

‘We had no idea what we were getting ourselves into or where we were going.’

However, should her children ever want to dip their toes in the world of reality television, Nicole said she’s all for it, but ‘it just depends on what it is’.

‘If my kids said to me, “I want to try this new thing that hasn’t been done before.” You just say… Well, obviously now they’re preteen, so I’m going to say no. But yeah, if they’re 18 and they want to go do whatever it is, as long as it feels good and authentic to them, I’m fine with it.’

The Simple Life is available to stream on Amazon Prime Video in the UK.