Sam Quek was forced to deny that she was involved in any naughty antics at the Olympic village in 2016 during a ‘spectacularly awkward’ moment during BBC One’s Olympics coverage.

The athlete, who won gold for Team GB as part of their field hockey team in Rio, is presenting the BBC’s Olympics Breakfast Show with Dan Walker, and on the first official day of competition, they were joined via video link by Team GB’s chef de mission Mark English, who gave an insight into how the athletes were feeling.

However, when it came to Dan joking about Sam’s behaviour at the Rio Olympics, things got awkward real quick.

However, Mark – who is in charge of leading the GB delegation in Tokyo – paused before saying: ‘As you know, social distancing and physical distancing is the order of the day so…’

Sam quickly said: ‘Woah woah woah, I was in a very happy relationship then, Mark’, with her co-host saying: ‘Well this has got spectacularly awkward, Mark.’ 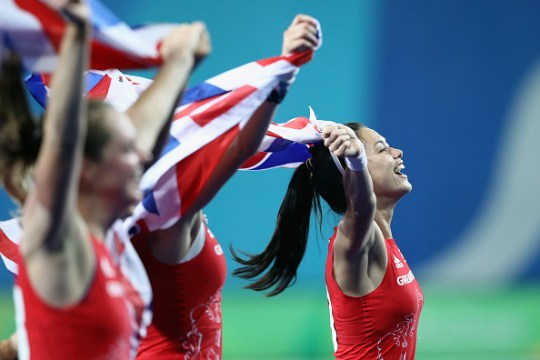 Sam – who was dating Tom Mairs for three years at the time of the 2016 Olympics – turned to the camera and said: ‘Just to assure everybody at home and my dear now-husband, us hockey girls are very well behaved because we compete throughout the whole tournament.’

However, Mark’s claim piqued some viewers’ interest, as Sam later confessed to getting a curious text from a former I’m A Celebrity… Get Me Out Of Here! campmate.

Dan said: ‘The repercussions of our chat about the athletes’ village after you won your gold medal continue. Sam’s already got a text from who?’

Dan laughed: ‘Vorderman is demanding information, but there isn’t any.’

However, as Sam said, she was in a committed relationship at the time of the Games, and married businessman Tom in 2018.

The couple welcomed their first child, a daughter named Molly, in March after a ‘traumatic’ C-section following a 27 hour labour.

Tom told OK! magazine: ‘It was quite traumatic getting Molly out, because Sam’s abdominal muscles are so developed they couldn’t cut through them.

‘It was quite funny, because Sam was measuring quite small and they estimated Molly would be between 5lb and 6lb – but they got her out and the doctor was like, “She’s massive!”

‘They put her on the scales and she was 7lb 14oz. It must have been Sam’s abdominals keeping Molly in.’