Someone definitely was having fun with this assignment (Picture: BBC)

There isn’t much to laugh about when it comes to the fuel shortage gripping Britain, but we’ve got to shout out BBC Breakfast for this stunning case of nominative determinism.

The BBC’s political reporter for Cheshire has trended on Twitter this morning due to the perfect match of his beat for the day and his name.

The beat? Covering the petrol panic in Stockport. The reporter’s name? Phil McCann.

While we’re sure Phil is extremely qualified and the right reporter for the job whatever his name, we have to think somebody at the BBC was having fun with this one…

Phil was at a petrol station in Stockport which was out of both unleaded and diesel fuel to panic over shortages, and appeared on BBC Breakfast to explain the situation.

Viewers were left chuckling over their cornflakes as the issue of drivers filling up jerry cans with fuel was described by Phil McCann.

There is only one BBC reporter to do the story of panic-buying of fuel. And it is Phil McCann.

I would say the intervals between me having to stop what Iâm doing to just laugh at the words Phil McCann have now lengthened to around eight minutes, which is manageable.

As screenshots of the broadcast went viral on Twitter, people said ‘you couldn’t make it up’, with one tweet reading: ‘If ever there was a roving reporter that could cover a fuel shortage…’

GB News’s Simon McCoy tweeted: ‘There is only one BBC reporter to do the story of panic-buying of fuel. And it is Phil McCann.’

Phil’s friend Adam Widdrington was thoroughly enjoying the situation, tweeting: ‘One of my best mates, Phil McCann, is the No. 1 trend in the UK this morning.I’ve been laughing about his name since 2003. What a morning!’

Thankfully, Phil took his newfound internet fame in his stride, tweeting: ‘It’s like being back in year 9! #nominativedeterminism.’ 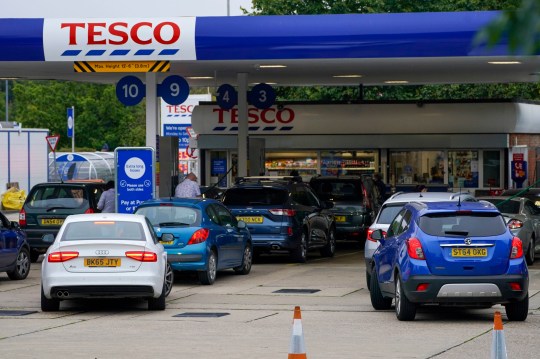 A major shortage of HGV drivers has caused disruption across the country, with panic buying spreading after BP said around 20 of its 1,200 petrol forecourts were closed due to a lack of available fuel.

A ‘small number’ of Tesco refilling stations have also been impacted, said Esso owner ExxonMobil, which runs the sites.

And on Friday the EG Group, which has around 400 petrol stations in the UK, said it was imposing a £30 limit on customers ‘due to the current unprecedented customer demand for fuel’.

Secretary of State for Transport Grant Shapps said long-running recruitment problems and labour market changes caused by Covid-19 were to blame for the shortages, denying Brexit has played a role.