Sarah and Phillip were co-hosts in the 80s and 90s (Picture: Comic Relief via Getty Images)

Phillip Schofield has confessed that in his experience, working in TV was ‘a lot more fun’ in the 90s as presenters were able to have more of a ‘laugh’.

This week, Holly Willoughby is launching a brand new BBC game show with The Chase Bradley Walsh called Take Off with Bradley and Holly, which will see contestants compete for a chance to head off on dream holidays.

Phillip sardonically admitted that he was ‘devastated’ over Holly’s new gig, considering the pair are usually joined at the hip as co-hosts of This Morning and Dancing On Ice.

Phillip has been a staple of British TV since the 80s going on to present Going Live! with Sarah Greene from 1987 to 1993, an experience the pair recently reminisced fondly about.

During an appearance on radio show Sound of the 90s with Fearne Cotton, Phillip compared his work in TV in the 90s to the current day, explaining that nowadays there are ‘regulations’ that need to be followed.

‘Sarah and I – and you Fearne, actually – were at the tail end when telly was an enormous amount of fun,’ the 59-year-old said, having discussed his new book. 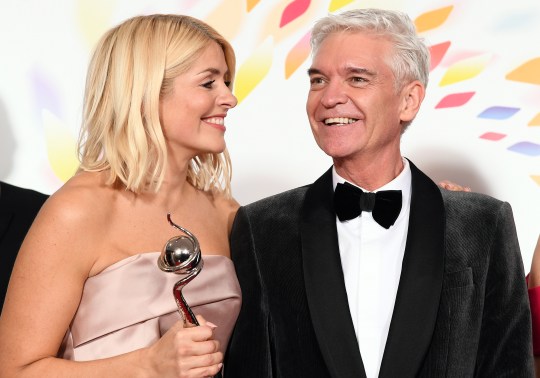 ‘Now of course there are regulations, but in those days, it was just a lot more fun and free and open and a laugh, and so I wanted the book to be all of that.’

Phillip said that he ‘loved’ the fact that they filmed their show in TC7, a building where This Morning is also filmed that he loves ‘so much’.

‘Next door was a big entertainment studio, TC6, and sometimes [Dawn] French and [Jennifer] Saunders would be in there rehearsing and get bored in their rehearsals and they’d be dressed in whatever outfits they had on from the sketch and they’d just walk in and mess about with us in the studio,’ he recalled.

The presenter added that the security on the door to the studio was so relaxed that often people would just walk in during recordings.

Sarah, 63, explained how she and Phillip would get huge celebrities onto their show including Sting, as his children were avid watchers of the programme.