Piers Morgan has a new pep in his step after his Ofcom victory (Picture: PA)

Piers Morgan won’t be unemployed for much longer as the presenter has claimed job offers have ‘accelerated’ after winning his Ofcom complaint.

The 56-year-old scored a victory in his watchdog dispute after he quit Good Morning Britain in March due to receiving more than 50,000 complaints over his comments about Meghan Markle.

With a pep in his step, Piers is looking to return to the spotlight and has even hinted that he could resume his TV career in the States again or elsewhere abroad.

Speaking outside his home on Wednesday, he said: ‘I have had loads of offers and they have accelerated in the last 10 hours, as you can imagine, and I will take my free speech campaign around the world and all I require is to have an employer who believes in it as passionately as I do.’

The broadcaster is confident he’s a ‘valuable commodity’ based on GMB scoring its highest ratings on the day he quit and, you can bet, he’ll be using that as leverage in any contract negotiations.

He then added: ‘I’m considering some very interesting offers right now and I will make a decision quite soon.

‘This is a landmark ruling by Ofcom today. This is Ofcom saying I and any other broadcaster is entitled to say to a public figure, “I don’t believe you”. 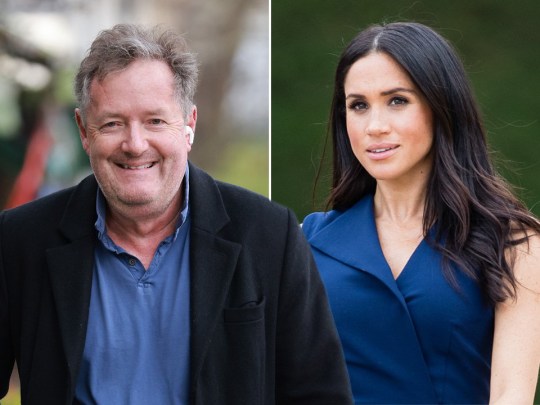 ‘Because if they had gone the other way and said I had to believe Meghan Markle even when she was lying, where does that leave us with Government ministers who I was challenging during the pandemic?’

In its 97-page ruling, Ofcom said that while Piers’ comments were ‘potentially harmful and offensive’, Good Morning Britain did not breach the broadcasting code.

The ruling read: ‘This was a finely-balanced decision. Mr Morgan’s comments were potentially harmful and offensive to viewers, and we recognise the strong public reaction to them.

Iâm delighted OFCOM has endorsed my right to disbelieve the Duke & Duchess of Sussexâs incendiary claims to Oprah Winfrey, many of which have proven to be untrue. This is a resounding victory for free speech and a resounding defeat for Princess Pinocchios.
Do I get my job back? pic.twitter.com/czhzeejYpa

‘But we also took full account of freedom of expression. Under our rules, broadcasters can include controversial opinions as part of legitimate debate in the public interest, and the strong challenge to Mr Morgan from other contributors provided important context for viewers.

‘Nonetheless, we’ve reminded ITV to take greater care around content discussing mental health and suicide in future. ITV might consider the use of timely warnings or signposting of support services to ensure viewers are properly protected.’

Ofcom’s conclusion in its report stated: ‘The interview between the Duke and Duchess of Sussex and Oprah Winfrey contained serious allegations and it was legitimate for this programme to discuss and scrutinise those claims including their veracity.

‘Ofcom is clear that, consistent with freedom of expression, Mr Morgan was entitled to say he disbelieved the Duke and Duchess’s allegations and to hold and express strong views that rigorously challenged their account.

‘The Code allows for individuals to express strongly held and robustly argued views, including those that are potentially harmful or highly offensive, and for broadcasters to include these in their programming. The restriction of such views would, in our view, be an unwarranted and chilling restriction on freedom of expression both of the broadcaster and the audience.’

What is Ofcom and what does it cover?

Ofcom is the regulator for the communications services that we use and rely on each day.

The watchdog makes sure people get the best from their broadband, home phone and mobile services, as well as keeping an eye on TV and radio.

Ofcom deals with most content on television, radio and video-on-demand services, including the BBC. However, if your complaint is about something you saw or heard in a BBC programme, you may need to complain to the BBC first.

Its rules for television and radio programmes are set out in the Broadcasting Code.

The rules in the Broadcasting Code also apply to the BBC iPlayer.

This Broadcasting Code is the rule book that broadcasters have to follow and it covers a number of areas, including; protecting the under-18s, protecting audiences from harmful and/or offensive material and ensuring that news, in whatever form, is reported with due accuracy and presented with due impartiality.

Audiences can complain to Ofcom if they believe a breach of the Broadcasting Code has been made.

Every time Ofcom receives a complaint from a viewer or listener, they assess it to see if it needs further investigation.

If Ofcom decide to investigate, they will include the case in a list of new investigations, published in the Broadcast and On Demand Bulletin.

An investigation is a formal process which can take some time depending on the complexity of the issues involved.

Ofcom can also launch investigations in the absence of a complaint from a viewer or listener.