Ruth and Eamonn presented together for 15 years (Picture: S Meddle/ITV/Rex)

Ruth Langsford has shown her support for husband Eamonn Holmes after it was announced his move away from ITV to host a new programme on GB News.

Eamonn, 62, confirmed on Friday he would be taking up a new role at GB News, which he will begin in early 2022.

This came just days after his exit from This Morning, which he presented for 15 years alongside wife Ruth, 61.

Loose Women anchor Ruth posted a sweet message congratulating her husband on his career move as she marked the beginning of ‘another chapter.’

In an update posted to her one million Instagram followers, she wrote: ’And so another chapter begins…

‘I’ll miss working alongside him but he’s back doing what he loves most….news.

‘Can’t wait to see him back in action! @eamonnholmes @gbnewsonline.’ 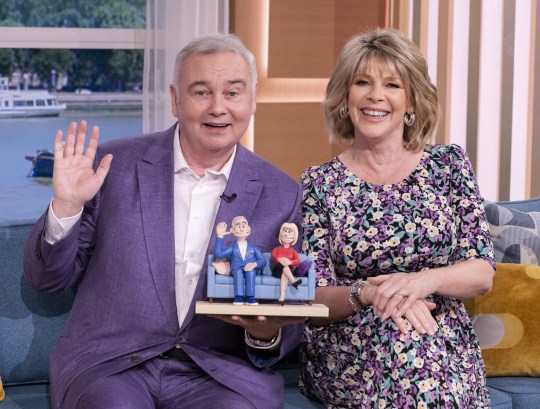 Shortly after Eamonn’s news, it was confirmed by ITV that Ruth would be set to remain as a regular fixture on both Loose Women and This Morning.

A spokeswoman for ITV on Friday: ‘We would like to wish Eamonn all of the very best in his new role.

‘As a duo, Eamonn and Ruth have been part of the This Morning presenting team for the last 15 years and we thank Eamonn for all of his hard work and contribution to the show.

‘Ruth remains an important part of ITV Daytime both as a continuing member of the This Morning family and as an anchor presenter on Loose Women.’

The TV presenter will host a new programme in the New Year, GB News confirmed.

Eamonn said of the move: ‘I’ve spent my career on broadcasting firsts and start-ups, and GB News is one of the most exciting yet.

‘It’s just the kind of shake-up the industry needs.’

He added: ‘I’ve admired GB News from the beginning for its clever mix of punchy debate but delivered with warmth and even some fun.

‘To me the greatest honour in journalism is to give a voice and respect to the unheard, and that’s exactly what GB News is all about.’

Ruth and Eamonn started presenting This Morning together back in 2006, and regularly hosted together on Fridays.

However, their future on the show has been under speculation in recent months after Dermot O’Leary and Alison Hammond took over their slot.

But as stated by the broadcaster, Ruth will continue her involvement as part of the ITV family despite Eamonn’s exit.