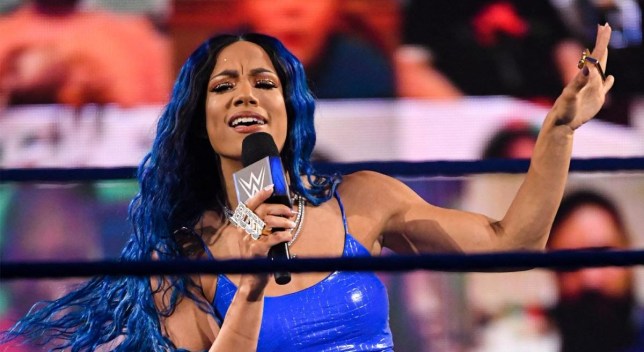 The Legit Boss wanted to walk away (Photo: WWE)

The Legit Boss – who starred in the second series of The Mandalorian and is the current SmackDown Women’s Champion – has opened up on her long hiatus in 2019, and admitted she felt like she had ‘lost’ herself.

Speaking to ‘Stone Cold’ Steve Austin on WWE Network’s Broken Skull Sessions, Sasha – whose real name is Mercedes Varnado – said: ‘At Elimination Chamber, I know how important that match was for Bayley, but at that time I still was slowly [going down] and not happy…

‘And I really, really lost myself because for a good seven years, I didn’t even hear my real name. I didn’t hear Mercedes anymore.

‘All I heard was Sasha Banks, and traveling on the road, we only get one to two days off. So, I’m home, not even seeing what my real hair looks like. All I see if purple hair every single day.

‘There were just so many things that were just — I let it control me. I let it take it and be like, “This is too much” instead of being like, “You know what? Everything’s good. Breathe. Everything’s fine.” [laughs]’

Banks decided she needed a break from professional wrestling and took the tough decision to ask Vince McMahon to be let go.

‘I didn’t even know who the hell I was. How I was going into work, how angry I was going in, how sad I was. I was not the person that I dreamt to be,’ she added.

‘It hit the fan and I wanted to make sure that I didn’t lose myself. So I said, “You know what? I got to take a step away and find myself again and I gotta be brave about that.”

‘And that was probably one of the hardest things I had to do — ask to leave the WWE… I asked to leave and Vince was like, “no”. [laughs] He said no.