Fans are already loving the dynamic between Jennifer and Bruce (Picture: Marvel Studios/Disney Plus)

A new look at upcoming Marvel series She-Hulk has been released… and after all the flack the show’s CGI previously received, fans are now overjoyed by the green, mean visual effects.

The nine-episode superhero comedy is set to introduce Orphan Black star Tatiana Maslany as Jennifer Walters, a cousin of Bruce Banner (Mark Ruffalo) who inherits his Hulk-appearance and abilities after becoming infused with his blood.

A lawyer by day, Jennifer embarks on hero training with her cuz on a secluded island, a snippet of which has been shown in a brand new one-minute clip.

As well as loving the dynamic between the relatives – with Jennifer poking fun at the fact that she’s seemingly a superior Hulk to seasoned Avenger Bruce – fans have also noticed what looks like improved and refined CGI.

The show’s visual effects were previously the subject of scorn on social media, with fans originally blasting the ‘rough’ CGI when the first trailer was released.

Not long after, official grabs released by Marvel Studios sparked comparisons with Fiona from Shrek… but it looks like viewers around the world are going to be eating their words if this new footage is anything to go by.

One Twitter user wrote that the clip was ‘more proof of the absolute genius of the VFX artists that worked on this’, while someone else remarked: ‘The CGI looks soooo much BETTER here and the chemistry between Ruffalo and #TatianaMaslany is fantastic.’ 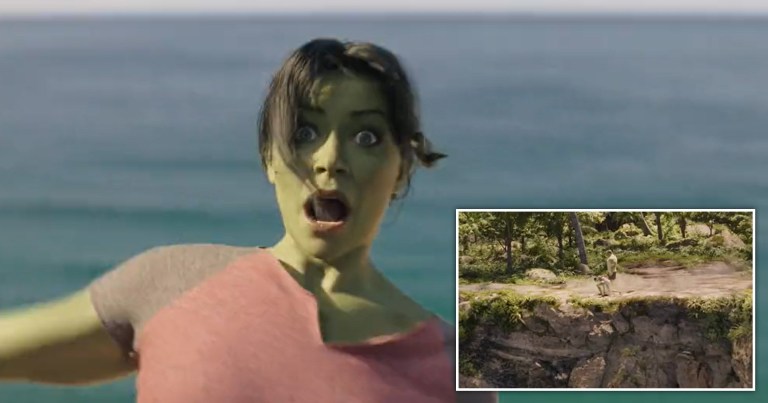 Jennifer doesn’t understand why learning superhero skills will benefit her daily life working as a lawyer (Picture: Marvel Studios/Disney Plus)

She proves pretty quickly she can do everything Bruce can do… and better (Picture: Marvel Studios/Disney Plus)

A viewer who seemingly needed some convincing commented: ‘Ok, the CGI looks so much better here. Will give it a watch for sure,’ while another expressed their relief that ‘they fixed it’.

Where can we sign up for training on a tropical beach? (Picture: Marvel Studios/Disney Plus)

Bruce explains one of the biggest upsides to being Hulk – a greater capacity to drink (Picture: Marvel Studios/Disney Plus)

She-Hulk’s director Kat Coiro addressed the criticism of the CGI that had been seen so far in a recent interview, explaining that they saw it coming.

‘I think a lot of the reactions have to do with the fact that she is so different than anything we’ve seen,’ she told SFX magazine.

‘When you think of Thanos or Hulk, they have a grisliness and a harshness and a bulkiness to them that is just so different. And when you just see a little pop of her, it’s almost shocking because we haven’t seen it before.’

She-Hulk premieres on Wednesday August 17 on Disney Plus.