Adam said he was ‘so in the moment’ while performing the Argentine Tango (Picture: BBC)

Strictly Come Dancing 2021 star Adam Peaty has spoken out about how he has dealt with the huge amount of attention and critical comments he has received during his time on the show, saying that he ‘couldn’t care less’.

In week four of this year’s series on BBC One, Adam and his professional dance partner Katya Jones performed a sizzling Argentine Tango to Tango in the Night by Fleetwood Mac, ending their performance with what some viewers perceived to be an ‘almost kiss’.

Adam spoke out over the speculation, emphasising the ‘real life consequences’ that can follow, while his girlfriend Eiri Munro shared a hilarious reaction on social media, pretending to cry in a video captioned: ‘Watching your boyfriend almost kiss another woman on live tv.’

Following claims that Adam was ‘beside himself’ over trolls targeting his girlfriend online, the Olympian spoke to Metro.co.uk about how he is coping with the intense scrutiny from the public and the media.

When asked how he and his family are dealing with the attention, the swimmer said: ‘Honestly, I had this chat with Eiri actually, I couldn’t really care less because I’m used to media in the sense of sport and I’m used to that kind of approach.

‘Normally you’d be like “Aw that’s annoying,” or “I hate what they write”, but you can’t control that, so what’s [the point] getting upset?’ 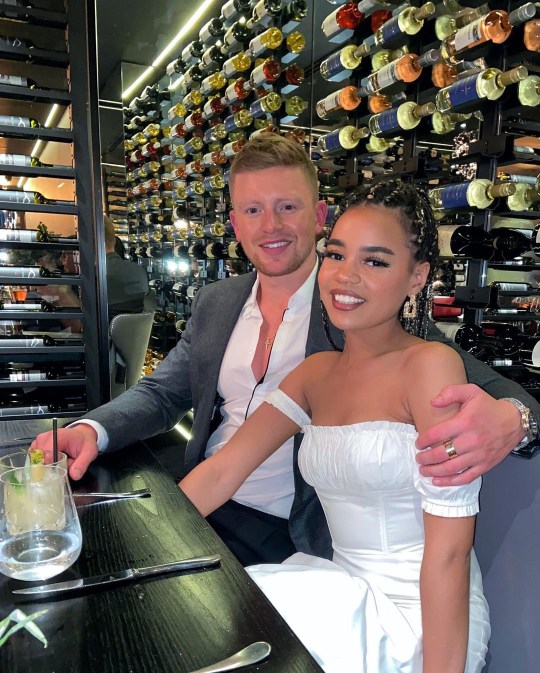 Adam acknowledged that the only thing he and Katya can control is their dancing, as they have no say on how they are perceived in the media or viewers.

When it comes to trolls, the 26-year-old has admitted that he has considered whether or not to respond when ‘someone with five followers on a fake account’ targets him.

‘But at the same time I’m like, they’ve obviously got more things going on in their life than I’ve got in mine, if that makes sense, if they need to send hate to me. Cause I get a lot of hateful messages, especially on the Argentine Tango. But I actually realised, I’m just trying my best to be a dancer here,’ he stated.

Following the Argentine Tango that he and Katya delivered a couple of weeks ago, Adam revealed that he ‘didn’t think anything of it’ until he saw Twitter, which erupted with reactions to what appeared to look like an ‘almost kiss’.

‘That is the honest truth, because I was so in the moment and I loved the dance and we performed the dance, we did our best version on that night, and I think it was incredible,’ he said.

During Halloween Week, Adam and Katya breathed a sigh of relief when they were saved by the judges in the dance off, with Judi Love and Graziano Di Prima being sent home.

For week seven, they’ll be taking on the fast-moving Jive to Little Bitty Pretty One by Frankie Lymon & The Teenagers in the hope of making it through to the next stage of the competition.

Strictly Come Dancing returns on Saturday at 6.45pm on BBC One.