Rose and Giovanni are doing an incredible job this year (Picture: BBC/Instagram/@rose.a.e)

Strictly Come Dancing contestant Rose Ayling-Ellis is continuing to make history on the show and told us how fantastic it is to be able to represent the Deaf community.

After a dramatic Tango to Ed Sheeran’s Shivers even saw the man himself back them to win, the pair look to continue to go from strength to strength ahead of tonight’s Samba.

We caught up with Rose and Giovanni after their incredible Halloween weekend as they discussed representing the Deaf community as well being the favourites to win the competition.

Asked how great it’s been to be able to spread awareness as the show’s first Deaf contestant, Rose exclusively told Metro.co.uk: ‘It’s amazing, when I was a child, I never grew up seeing anyone like me on telly.

‘It could be a really isolating place for a Deaf person, so I feel like if being on Strictly can change somebody’s life, it can happen – because there are some parents out there with a Deaf child and they’re like, “Oh, what do I do?” 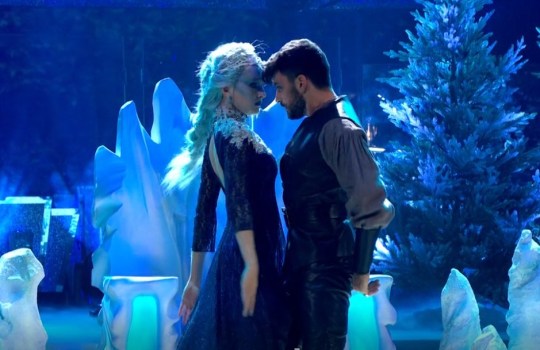 The pair scored the earliest 40 ever on Strictly (Picture: BBC)

‘Then they see me on the telly and think, “Oh it’s not that bad, they can actually do what a hearing child can do.” That’s why I feel really good doing that.’

Rose highlighted how great the whole team behind-the-scenes have been in order to help her take part in the competition without having any extra worries.

She said: ‘They’re so great, because I normally feel like sometimes, I go to a job, where I feel like I need this, this and this but Strictly never were like that with me, they just gave me everything I need.

Last month, the pair performed a Viennese Waltz in which they incorporated BSL right at the beginning of the routine, playing a couple who were arguing.

Rose revealed it was Giovanni who came up with the idea to add this in, with the latter saying: ‘The view of the dance was we were having an argument… I just wanted to be real and that’s when I thought of an argument.

‘That was the concept of dance, a couple having an argument, and we need to keep it real. So I just asked Rose, “How would you argue in a sign language?” and you [Rose] made the choreography, she was the choreographer.’

‘People never thought [about] what sign language is. And then suddenly a week on Strictly Come Dancing and it’s 1,000% more. It’s a big achievement, it’s more than a 10.’

Strictly Come Dancing continues tonight at 6.45pm on BBC One.