The EastEnders actor is among the 15 celebrities who originally signed up for the BBC’s juggernaut series, vying to impress judges Craig Revel Horwood, Motsi Mabuse, Anton Du Beke and Shirley Ballas.

The first week James and Amy danced the Jive, while on Saturday they performed the Tango to Bad Habits by Ed Sheeran, scoring 46 points out of a maximum of 80.

Ahead of Movie Week, where the 38-year-old will take to the ballroom floor with the Cha Cha Cha to a tune from Guardians of the Galaxy, he appeared on Tuesday’s episode of It Takes Two.

Appearing alongside Amy, host Rylan Clark asked James about his preparation for the latest live show, with the Cemetery Junction star revealing he had wounded his finger.

James explained: I was trying to show Amy how strong I was in the rehearsal room by doing pull-ups. And I like ripped my finger open.’

Rylan exclaimed: ‘So your finger nearly came off?’


James was showing off when he sustained the injury (Picture: BBC)

James added: ‘My wedding ring is keeping my finger on at the moment. So lets see how we get on with that one.’

Rylan applauded James for ‘living to tell the tale’, while Amy recoiled in horror at the gruesome retelling of the accident. 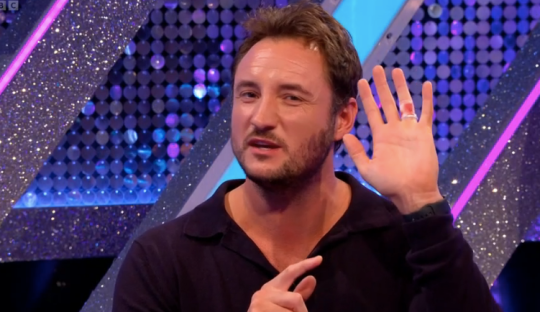 James joked his wedding ring was keeping his finger together (Picture: BBC)

James isn’t the only star to have needed some bandages with Loose Women’s Kaye Adams, the first celeb to be eliminated from Strictly, knocking her ribs on partner Kai Widdrington.

Lifting up her top so her ‘wounds’ which were taped up were in full view, the 59-year-old explained she had hurt herself during ‘energetic’ rehearsals with Kai.

Speaking to Metro.co.uk, she added: ‘I slightly mistimed a lift as Kai was chucking me over his shoulder. You know how you bump your elbow on the end of a table? Well, I bumped my rib on Kai’s rock-solid abs.

It Takes Two continues tomorrow at 6.30pm on BBC Two