Strictly Come Dancing star Tony Adams might not have achieved the highest score on the leader board, but he definitely won fans’ hearts with his throwback dance.

The football legend, partnered with Katya Jones, performed a Tango to the Pet Shop Boys’ Go West – a tune often sung by Arsenal fans as the chant ‘One Nil To The Arsenal’.

While Tony made a few mistakes, there was one part he performed perfectly, as he and Katya recreated his moves during a 2017 Granada training video that blew up and sent him viral.

Pushing his hands out in front of him before giving a wave to either side, Tony, who was Granada CF manager at the time, unintentionally cut some serious shapes – and Katya made sure to include them in their first routine.

‘Oh very good of tony adams to put his training mishap in there,’ one fan said, while another added ‘Tony Adams getting his infamous Grenada Training session moves into his Strictly dancing routine is simply sensational.’

One more said: ‘Tony Adams doing his “Granada training dance” on Strictly. What a time to be alive.’

Meanwhile, Tony also had fans obsessed as he rocked up to dance rehearsals in his football training kit.

Viral moves aside, it wasn’t the best night for Tony as he and Katya placed at the bottom of the leader board with just 15 points, behind Matt Goss and Nadiya Bychkova with 20.

Thankfully, no one was eliminated during the first week – so Tony will live to dance another day on the show.


He made quite an entrance (Picture: PA) 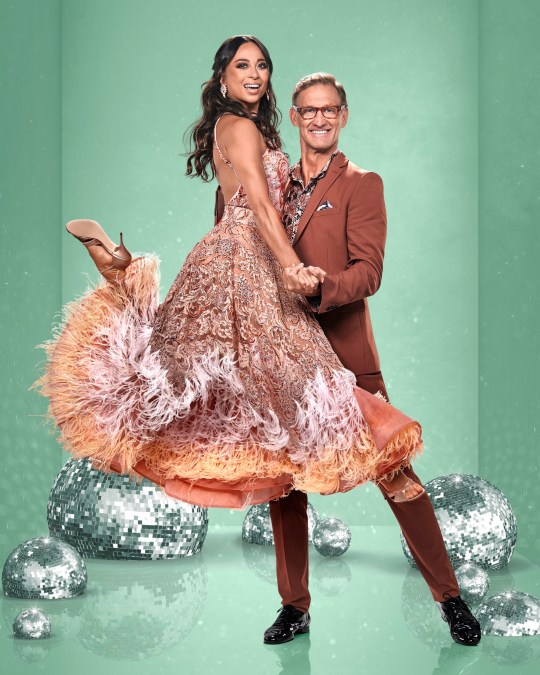 Tony and Katya placed at the bottom of the leaderboard – but stole fans’ hearts (Picture: BBC/Ray Burmiston)

On the other end of the leader board, Will Mellor and his partner Nancy Xu stormed their jive, and Hamza Yassin and Jowita Przystal came through with a beautiful Foxtrot, both landing at the top wit 34 points.

Elsewhere, on the first live show, Shirley Ballas had a slight mishap with her paddles, having to clarify her score for Tyler West and Dianne Buswell, who performed an American Smooth.

Meanwhile, Jayde Adams was left in tears after receiving a standing ovation for her epic Samba with her partner Karen Hauer.

Strictly Come Dancing continues Saturday at 6:30pm on BBC One.