Strictly The Real Full Monty: Laila Morse praised as she strips off

Laila Morse was branded an ‘inspiration’ as she stripped off on Strictly The Real Full Monty with no hesitation.

The former EastEnders actress, best known for playing Big Mo, is part of the line-up on this year’s edition of the annual ITV series.

Strictly The Real Full Monty sees a host of celebrities strip down to their smalls to raise awareness for cancer.

In one scene during Monday night’s episode, Laila, 76, was seen talking to Brenda Edwards backstage and admitted she would be going topless during the first challenge, while most of the other contestants were naturally still working themselves up to take the plunge.

Laila stated: ‘I had cancer and if I’d have died I wouldn’t be doing this, would I?’

She impressed host Ashley Banjo, who told the camera: ‘Laila, what can I say? Leading by example. I love her for that energy and we need it because right now she’s the only one willing to do the Full Monty.’

Viewers were blown away by Laila’s confidence, with one reacting on Twitter: ‘Laila is my new spirit animal, she just doesn’t give a f**k and I love her for it amazing man.’ 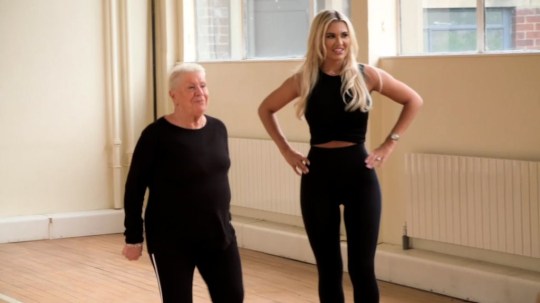 ‘Full respect to Laila from a fellow breast cancer surviver and everyone else touched by the disease. You go girl you represent all of us,’ another said.

One viewer tweeted: ‘Go Laila! I love that inspiration of just “I don’t care, let’s do it” and like she said, if she didn’t check herself she wouldn’t be here now. That’s inspiring and awareness right there.’

In the episode, Laila explained how she found a lump during her time on EastEnders and was convinced to get it checked by co-star Wendy Richard, who also was first diagnosed with breast cancer in 1996, ultimately dying from it in 2009.

Laila did finally get herself checked out and was told that the lump was cancerous in 2005.