There’s a very intriguing new thriller coming our way, with the new trailer for Kunal Nayyar and Uma Thurman’s series Suspicion giving a taste of what’s to come.

The show, which arrives on the streaming platform on February 4 – and if the clip is anything to go by, it looks set to be full of twists and turns.

Suspicion focuses on Uma’s businesswoman, Katherine Newman, whose world is turned upside down after her son is kidnapped in distressing scenes.

The trailer starts with the arrest of four people, who have been framed for the kidnapping of Leo Newman.

The series will see them look to prove their innocence, all the while Uma’s character looks to keep things together as best she can in the face of unimaginable adversity.

The synopsis reads: ‘When the son of a prominent American businesswoman is kidnapped from a New York hotel, the eye of suspicion quickly falls on four seemingly ordinary British citizens who were at the hotel on the night in question.

‘As they find themselves in a trans-Atlantic cat and mouse race to evade the combined forces of the National Crime Agency and the FBI to prove their innocence, it becomes apparent that not everyone can be trusted.

‘Who is really behind the mysterious abduction, and who is only guilty of being in the wrong place at the wrong time?’

The upcoming eight-part drama is from the mind of BAFTA nominee Rob Williams, who previously worked on Man in the High Castle. 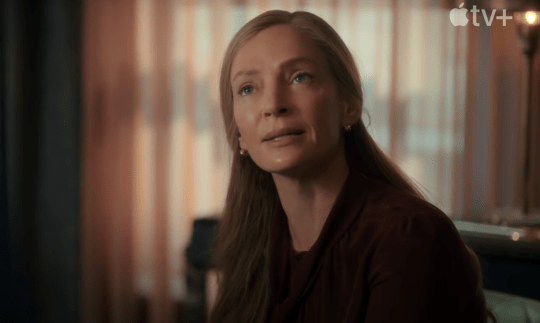 Uma leads the cast of the new series (Picture: Apple)

It’s a very different role for Big Bang Theory star than we’re used to seeing, with the new footage showing him under thorough investigation.

His transformation should come as no surprise though as he previously explained to Metro.co.uk he was keen to distance himself from Raj, and last year did just that in his first major TV role away from the sitcom as a killer in Netflix’s anthology seires, Criminal.