The Book of Boba Fett: Who is the black Wookiee?

Warning: spoilers ahead for The Book of Boba Fett episode 2.

The Book of Boba Fett fans might have had to do a double take while watching episode 2 on Disney Plus last week, as a tall, furry warrior stared down Boba Fett (Temuera Morrison) and Fennec Shand (Ming-Na Wen) on the streets of Mos Espa in Tatooine.

However, as his face came into view, it immediately became apparent that it wasn’t Chewbacca, Han Solo’s Wookiee best pal from the Star Wars films, but was instead a different member of the same species, a black Wookiee called Black Krrsantan.

Played by cast member Carey Jones, Black Krrsantan has an intimidating presence, particularly given his alliance with the Twins, the cousins of the late Jabba the Hutt.

So who is the mysterious Wookiee?

Who is the black Wookiee in the Book of Boba Fett?

While The Book of Boba Fett marks Black Krrsantan’s first live-action on-screen appearance, he will be familiar to many Star Wars fans who read the comics. 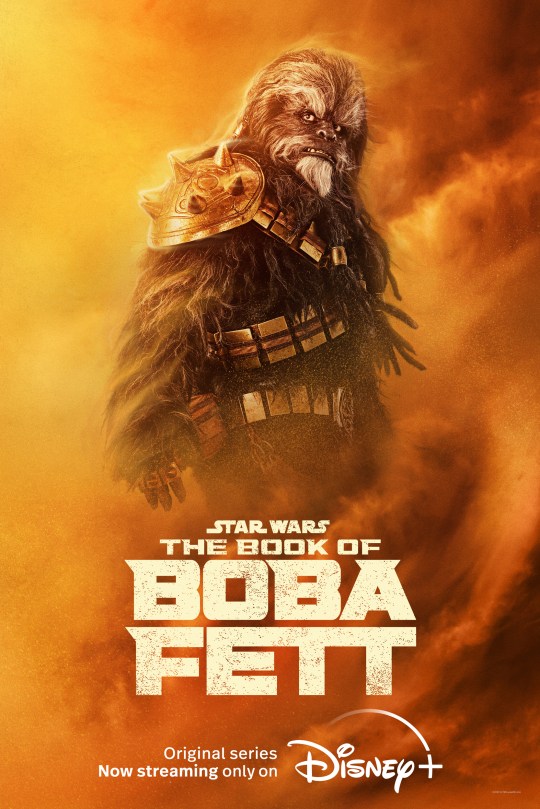 Can you imagine a face-off between Black Krrsantan and Chewbacca? (Picture: Lucasfilm Ltd/Disney Plus)

He was introduced in the first issue of the Marvel Comics’ Darth Vader comic book series, which was released in 2015.

Hailing from Kashyyyk, Krrsantan was captured and trained to become a gladiator by the Xonti Brothers, who made enslaved fighters go head to head in pit fights.

In order to increase his value as a fighter, the Xonti Brothers filled the Wookiee’s knuckles with metal, in a move that one might compare to Wolverine’s adamantium claws in Marvel.

Eventually, Krrsantan became a ferocious bounty hunter, gaining employment from none other than crime lord Jabba the Hutt, one of the most recognisable villains in Star Wars who, at one point, made Princess Leia his prisoner.

The Twins, sitting on their litter, have the Wookiee to act as their muscle (Picture: Lucasfilm Ltd/Disney Plus)

Krrsantan also worked for Darth Vader during the Galactic Civil War, where he crossed paths with Boba – and also faced Jedi Master Obi-Wan Kenobi in a duel.

It’s unclear whether The Book of Boba Fett will reference his past connection with Boba, or if that element of the story will be left to the comics.

When they meet in the Disney Plus series, Krrsantan has become the muscle for the Twins, the cousins of Jabba who are claiming his old territory as their own, which has already been taken over by Boba.

Fans were ecstatic by Black Krrsantan being brought to life in live-action, with his very own poster and all. 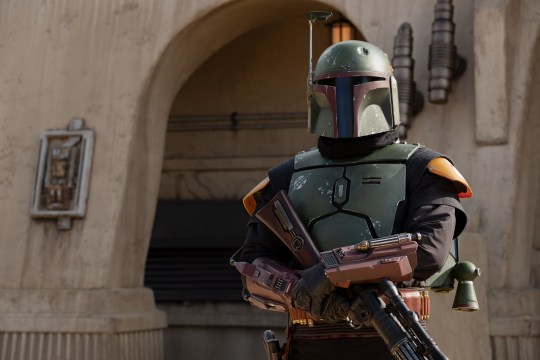 Will Boba’s past with Krrsantan be explored? (Picture: François Duhamel/Lucasfilm Ltd/Disney Plus)

Is Black Krrsantan related to Chewbacca?

There doesn’t seem to be any mention of Black Krrsantan being related to Chewbacca in the Star Wars source material, so it’s likely he’s simply another member of the same species.

What we wouldn’t give to see those two fight it out on screen – although we’d hate to see our beloved Chewie get hurt.

‘Wouldn’t it be epic, if Chewie made a guest appearance and faced Black Krrsantan! What a fight that would be,’ one fan tweeted.

‘Dude I’m so pumped for Black Krrsantan in #BookofBobaFett! I wanna see him and Chewie punch each other in the face in live action please,’ another admitted.

The Book of Boba Fett is available to watch on Disney Plus with new episodes released on Wednesdays.