Dumpy’s going to be a scene-stealer, we just know it (Picture: Instagram/@kaleycuoco)

The Flight Attendant fans, you’re in for a treat, because a brand new star is joining season 2 – Kaley Cuoco’s adorable senior dog, Dumpy.

The comedy-drama premiered to critical acclaim in late 2020, with viewers desperate to see more of Kaley’s protagonist Cassie Bowden, an air stewardess who in the first season, becomes implicated in a brutal murder that she has no recollection of.

The second batch of episodes are due to be released at some point this year, and The Big Bang Theory star’s pet chihuahua is going to be making an appearance.

In a new post on Instagram, Kaley shared a series of pictures, the first of which showed her rescue dog’s seat with the name ‘Dumps’ emblazoned across it next to hers, which was embossed with her initials.

‘Watch out for the real star who completely upstages me in an upcoming episode of @flightattendantonmax,’ she wrote.

‘@adventurers_with_dumps would like to thank the fabulous prop department for his special chair and his glam squad. Swipe for diva moments!’

Among the pictures, one featured Kaley smiling at the camera, holding Dumpy while he’s standing upright in his chair, with others showing him interacting with other members of the crew, including his ‘glam squad’.

One image also showed Dumpy sitting in a pram, with Kaley beaming as she posed alongside her canine companion.

Several people commented on the post, remarking on how sweet the photos were. 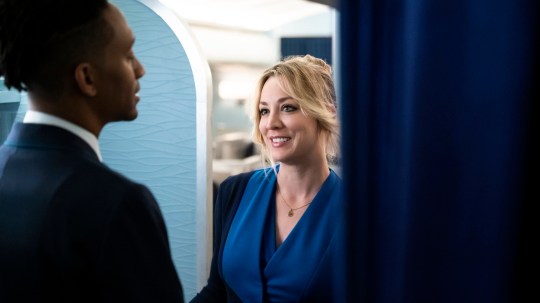 Kaley has been nominated for several awards for The Flight Attendant, including Golden Globes and SAG Awards (Picture: Phil Caruso/HBO Max via AP)

‘The last photo. I wonder if his previous owners know about his wonderful colourful life,’ one person said.

‘Oh my gosh!! I cannot wait for this episode!!! Go Dumps!! The chair is perfect!’ another wrote.

Kaley first set up Dumpy’s own Instagram account in August 2020, with the first post explaining how she has taken care of him since adopting him as a senior dog.

‘I legit went from rags to fancy rags in the blink of an eye. When I got rescued by @apurposefulrescue, I could barely walk, was overweight and every single tooth was rotted,’ the caption said.

‘Since those few months ago, I got in shape (I’m basically an Olympic athlete) and had all my teeth removed! I know sounds cray but I feel so much better and now I can actually eat!

‘This page is dedicated to my new adventure in NY where I will be with my crazy mom @kaleycuoco shooting her show The Flight Attendant. I still have no idea what that means but I’m learning as I go.’

The Flight Attendant is available to watch on Sky and NOW.