THE Masked Singer revealed Vivica A. Fox as Mother Nature in the shocking premiere’s double elimination.

Vivica A. Fox was revealed as Mother Nature on the double-elimination premiere 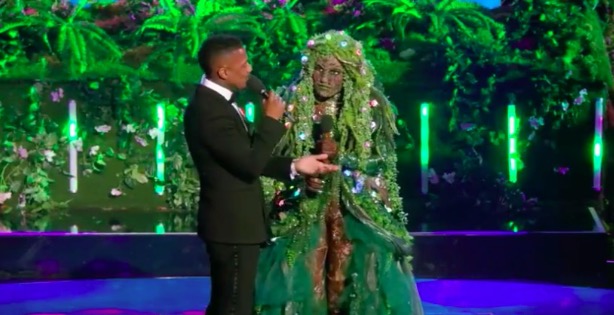 Mother Nature was eliminated on The Masked SingerCredit: Fox

Jenny McCarthy and the rest of the panel were shocked by the big revealCredit: Fox

For their final picks before it was revealed to be her, Ken, 52, and Jenny, 48, both guessed comedian Tiffany Haddish.

Meanwhile, Nicole, 43, and Robin, 44, both insisted the person was Tracee Ellis Ross and “proved” their point by The Masked Singer contestant belting out her mom, Diana Ross’ hit, I’m Coming Out.

Once the flowing green headpiece was removed from the Independence Day actress, the panelists were floored by the big reveal.

However, Jenny McCarthy claimed she “should’ve guessed” it was the Vivica as she previously “had it written down.”

“I knew, I just know you,” Nick told the natural beauty on stage – which she giggled and asked how he really knew it was her.

“This has been exhilarating. I have to pinch myself. I’ve done so many things in my career and I’ve never done anything like this before,” Vivica gushed on stage.

“And I had fun! I want to say to the panel, you are all amazing! Keep making dreams come true, I love you all,” she told the host and panelists.

The elaborate Mother Nature costume consisted of flowing tree vines as hair, branches for the body and a wooden mask to coverup the face.

Fans were surprised but disappointed with the elimination, with one saying: “How y’all going to send Vivica Fox home y’all wrong for that??”

“Vivica Fox was not on my radar wow!!!! Was way off,” another tweeted.

A third exclaimed: “I never would have guessed Vivica Fox… I was sure it was Tiffany Haddish.”

Last night, Fox’s competition show returned for its season 6 premiere and revealed the first celebrity to be sent home.

NBA star Dwight Howard, 35, was voted off as The Octopus but not before host Nick informed he that he was the “tallest contestant the show has ever had.”