THIS Morning fans have been left fuming after fitness influencer Sheridan Mordew appeared on the show to insist that her Dubai holiday was an “essential work trip” – and necessary for her “mental health”.

Hosts Phillip Schofield and Holly Willoughby appeared to be equally unimpressed with Sheridan’s claims – with Holly quick to point out that the rules on travel have always been clear, and have nothing to do with mental wellbeing. 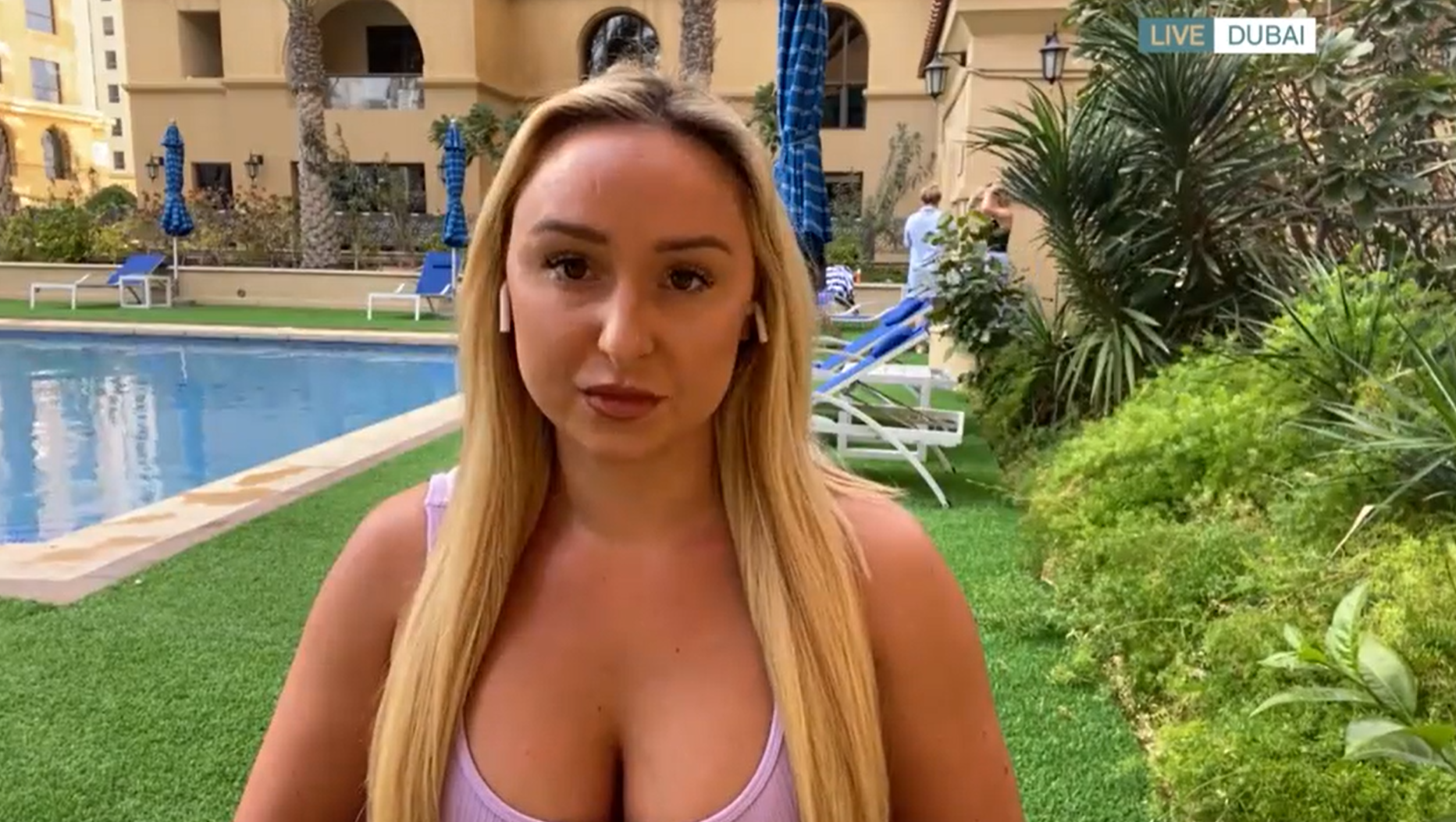 Fitness influencer Sheridan appeared on This Morning from Dubai today

Kicking off the show, Sheridan initially said that she had to travel to Dubai ahead of the New Year for work – despite strict tier restrictions against leaving the country being in place due to coronavirus.

However, when Phil pointed out that most of her fitness videos from Dubai were filmed inside her apartment, thus could have been made in the UK, Sheridan brought up the benefits that travel have had on her mental health.

Appearing live by the swimming pool from sunny Dubai, the 24-year-old fitness fanatic said: “The reason I came out to Dubai was purely for business, I’m a personal trainer – a lot of gyms have closed, so basically I took my online business over to Dubai and now I do things in my apartment.

“I used to do it in Britain but now I do it in Dubai, so it’s exactly the same.” 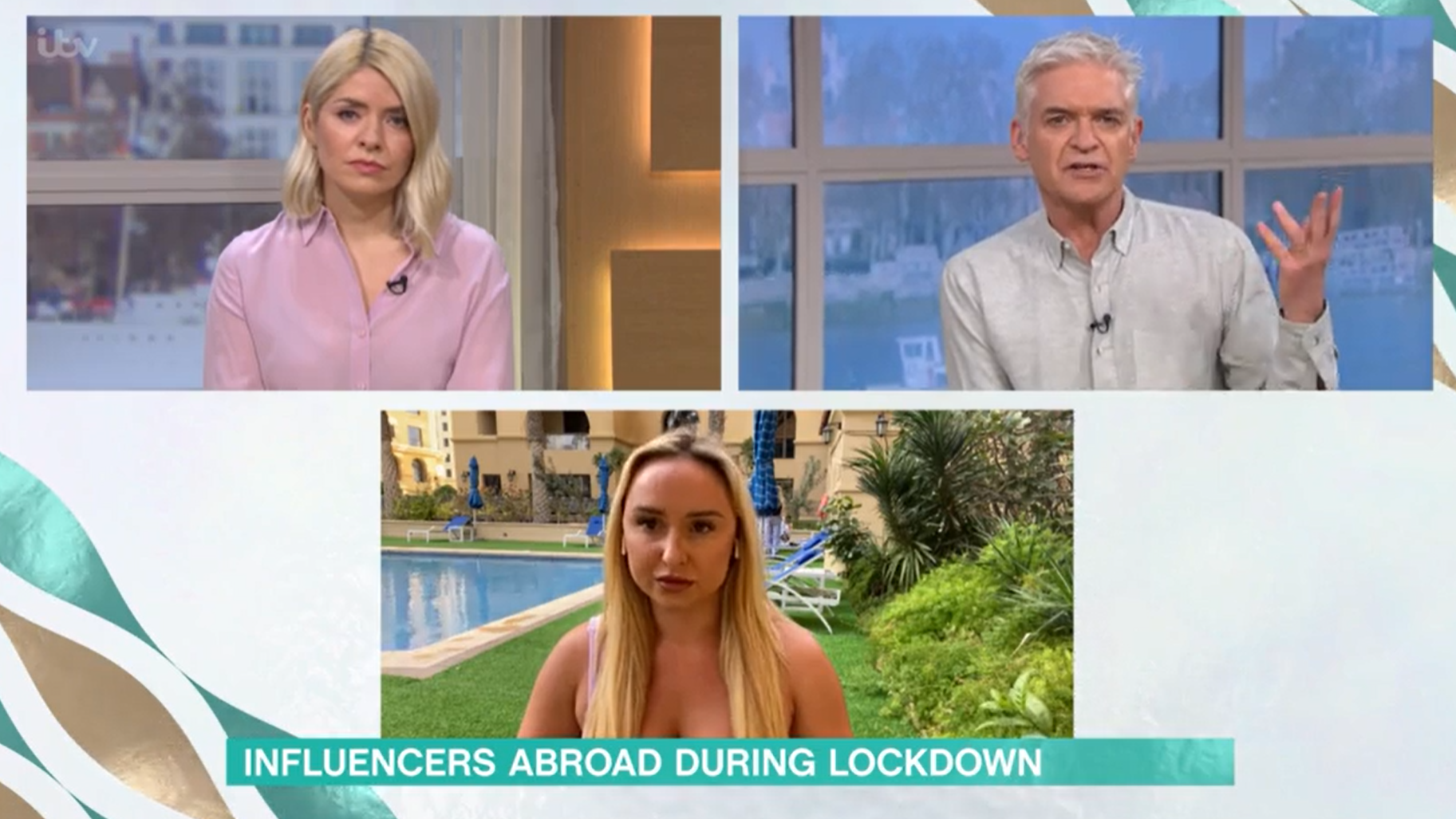 Holly and Phil were visibly unimpressed with the Instagram star

Phil interjected: “It’s interesting you say you’re doing it in your apartment, a lot of the fitness stuff could have been filmed in your garage in Bolton – you don’t have to be in Dubai to do that.”

Changing her tune, Sheridan insisted: “The main reason was my own self, my mental health kind of thing.

“Obviously during the second lockdown I was really struggling, a lot of my clients depend on me to bring them motivation and happiness.

“As the third lockdown was coming in I thought: ‘Well, my mental health is suffering, I’m not going to start something new just sitting in this house…’ – I had this idea but I could not be bothered. 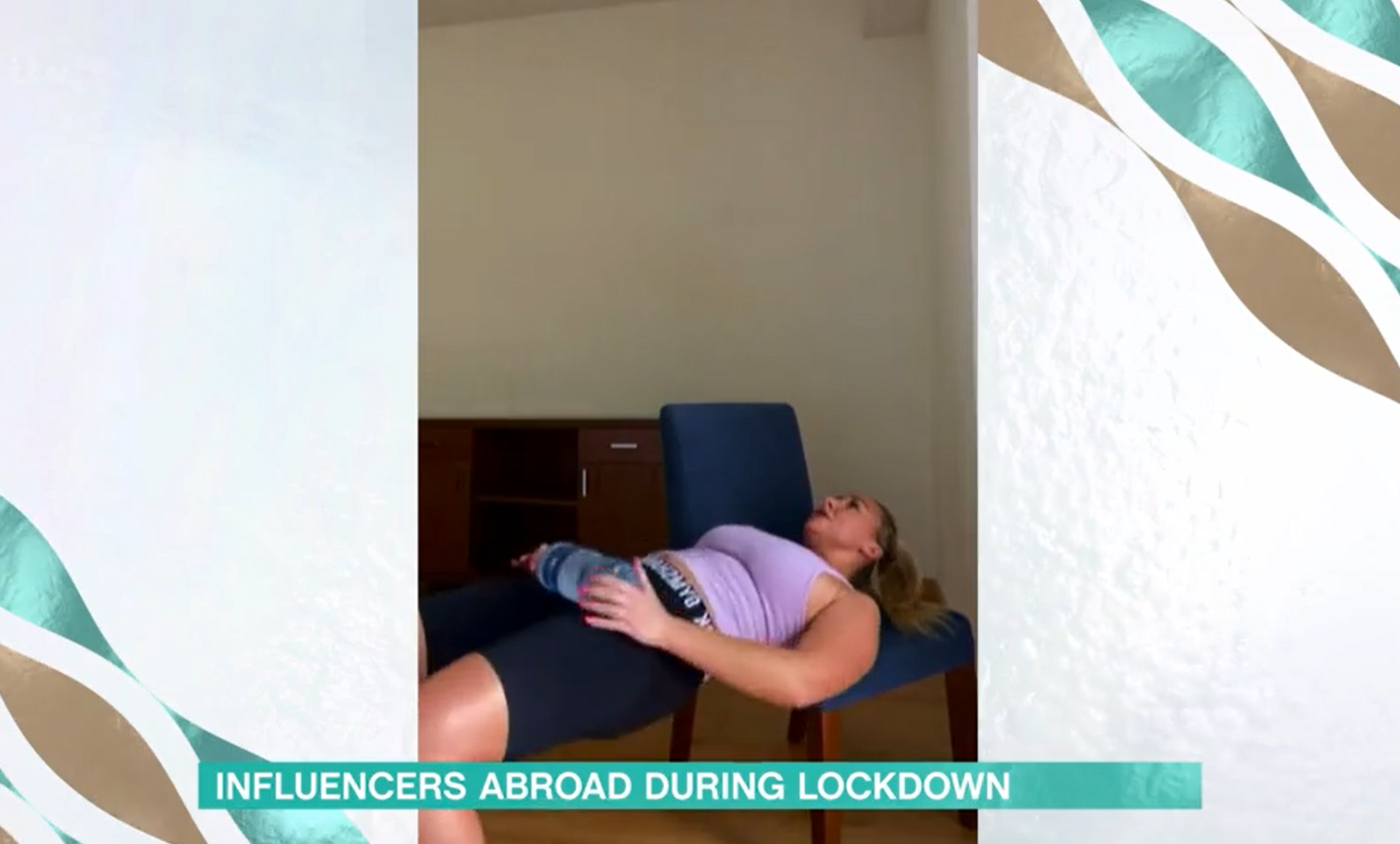 “With my own struggles, I thought the only way I’m going to get out of this is if I get on the plane for essential travel and go to Dubai.”

However, Holly hit back that mental health was not a valid reason for travel as she sympathetically reasoned: “We speak about mental health on this programme a lot and how throughout all of this there’s an extraordinary number of people suffering with their mental health.

“However, the rules on travel have nothing to do with mental health, it is purely based on work – that is the only reason you can go and there are other influencers – particularly fitness influencers – who are managing to work from here in the UK, Joe Wicks is a perfect example.”

Sheridan insisted that she has had messages from young followers saying that they felt “anxious and depressed”, so rather than “wallow in pity” she used the “loophole where you can go out for travel, and that will increase people’s mental health”. 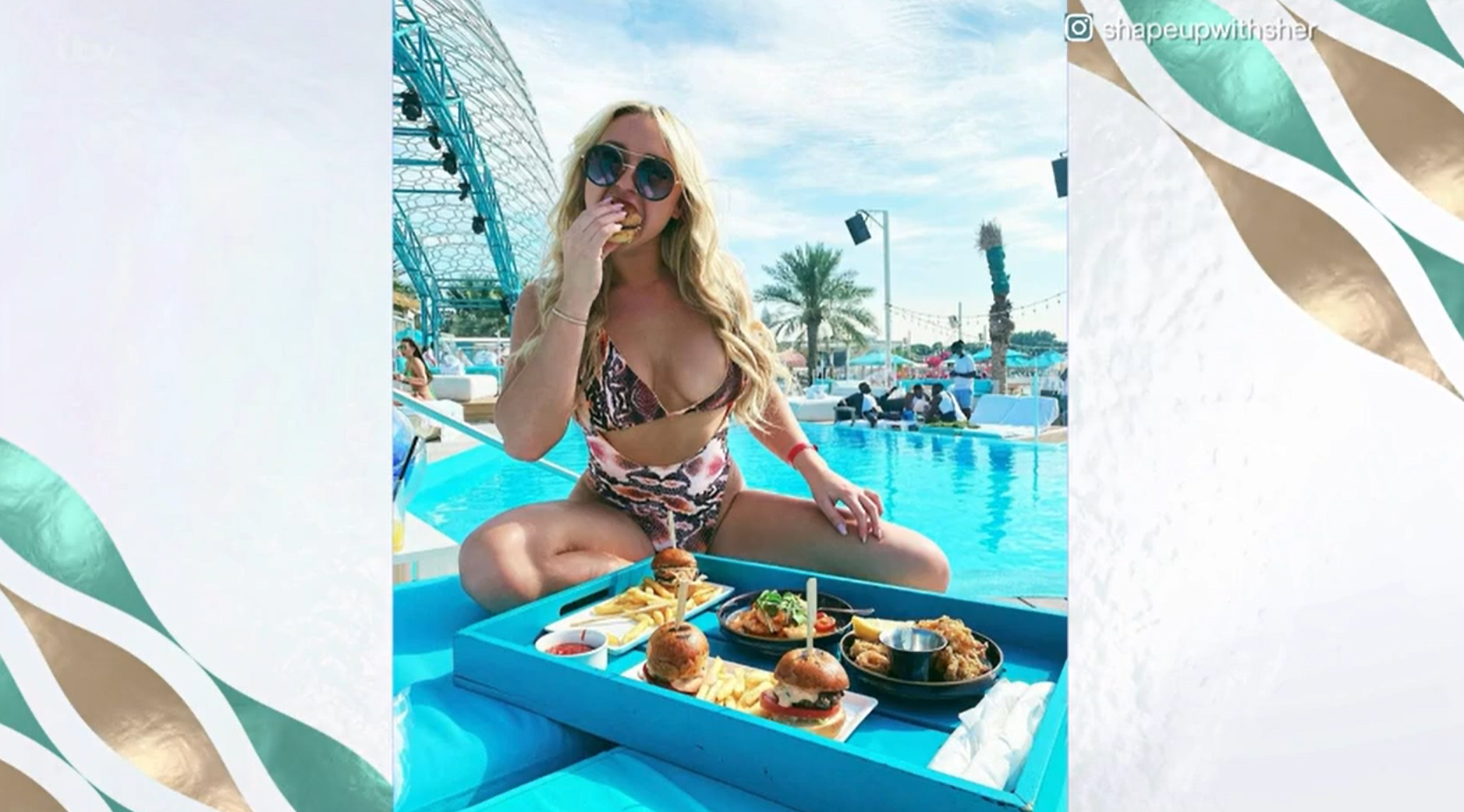 Sheridan maintained that the trip was ‘essential’ 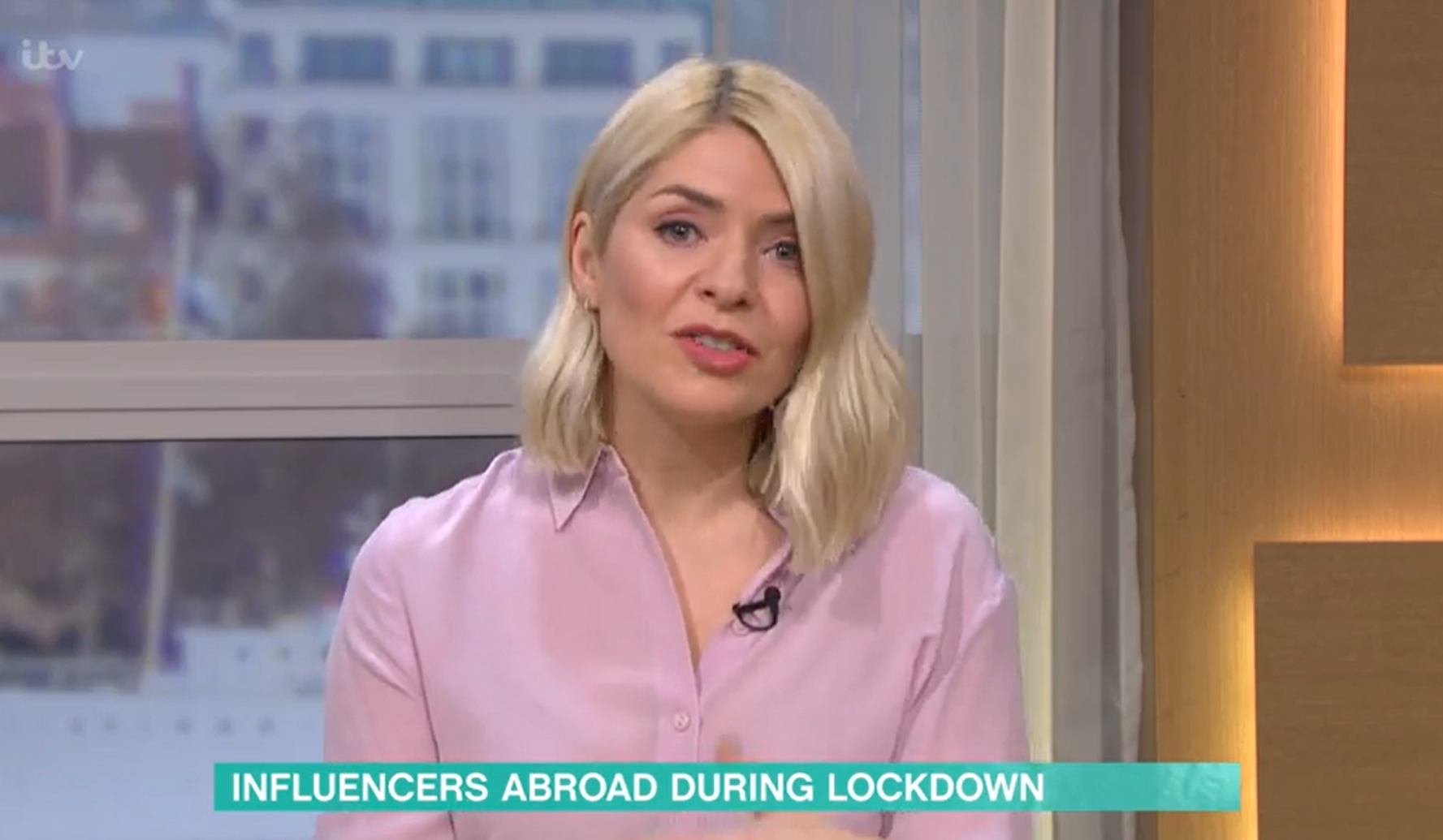 Holly questioned: “Do you think your pictures might actually add to people’s mental health struggles? They’ll be looking at your pics thinking: ‘I can’t do that’.”

Sheridan then admitted that she sometimes feels “guilty” about the trip and is divided about whether or not she should share the pictures, with Phil chuckling: “If you go to Dubai and you don’t post then you have absolutely no excuse to go in the first place!”

He also poked fun at the influencer when a video of her riding a camel in the desert was played, asking whether that was “essential work”, while Holly said that Sheridan’s attitude was “not in the spirit of lockdown”.

Sheridan concluded: “I just think that in a world where you can be anything be kind, and a lot of people forget about that.” 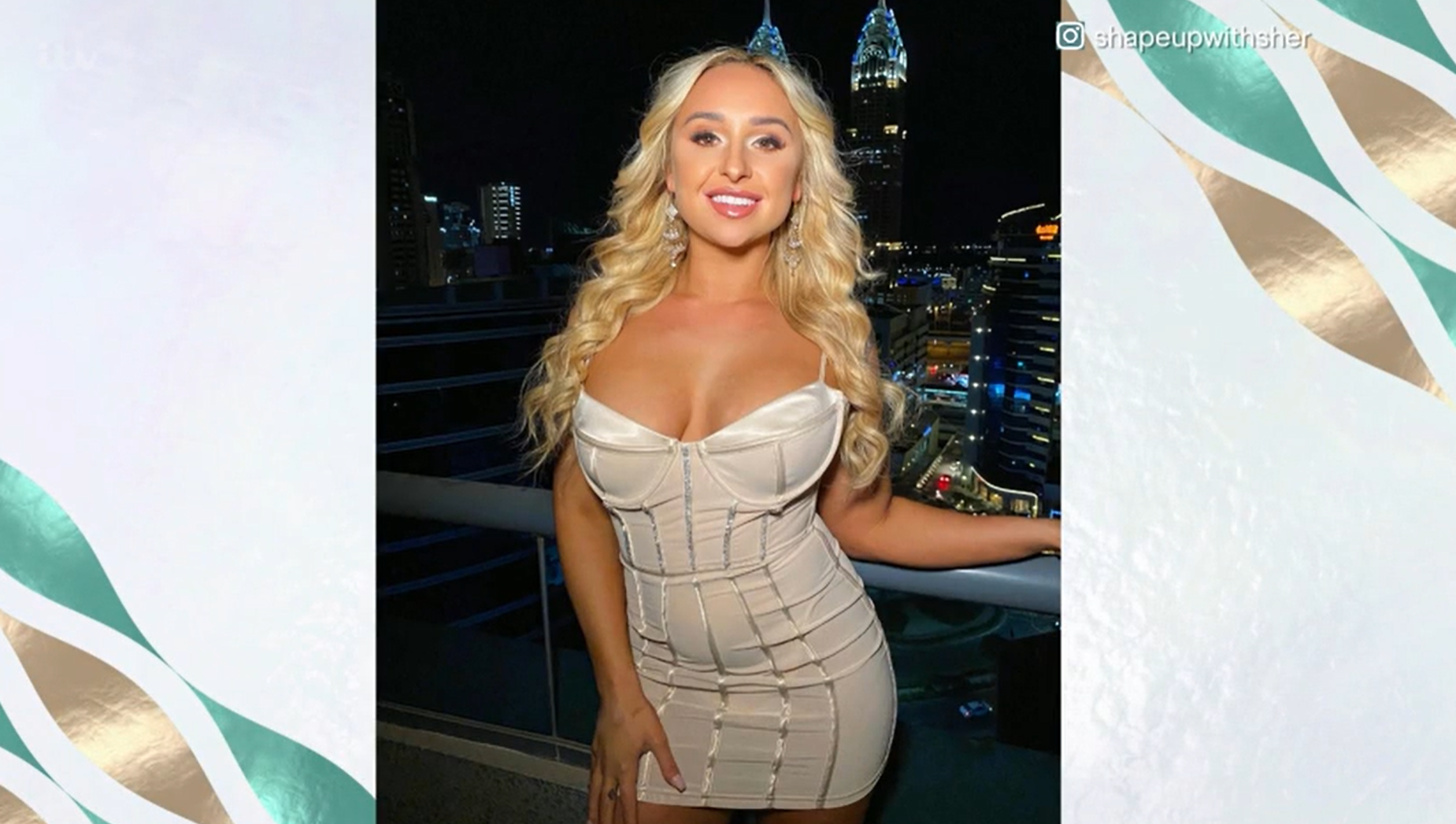 Sheridan insisted that critics should ‘be kind’ 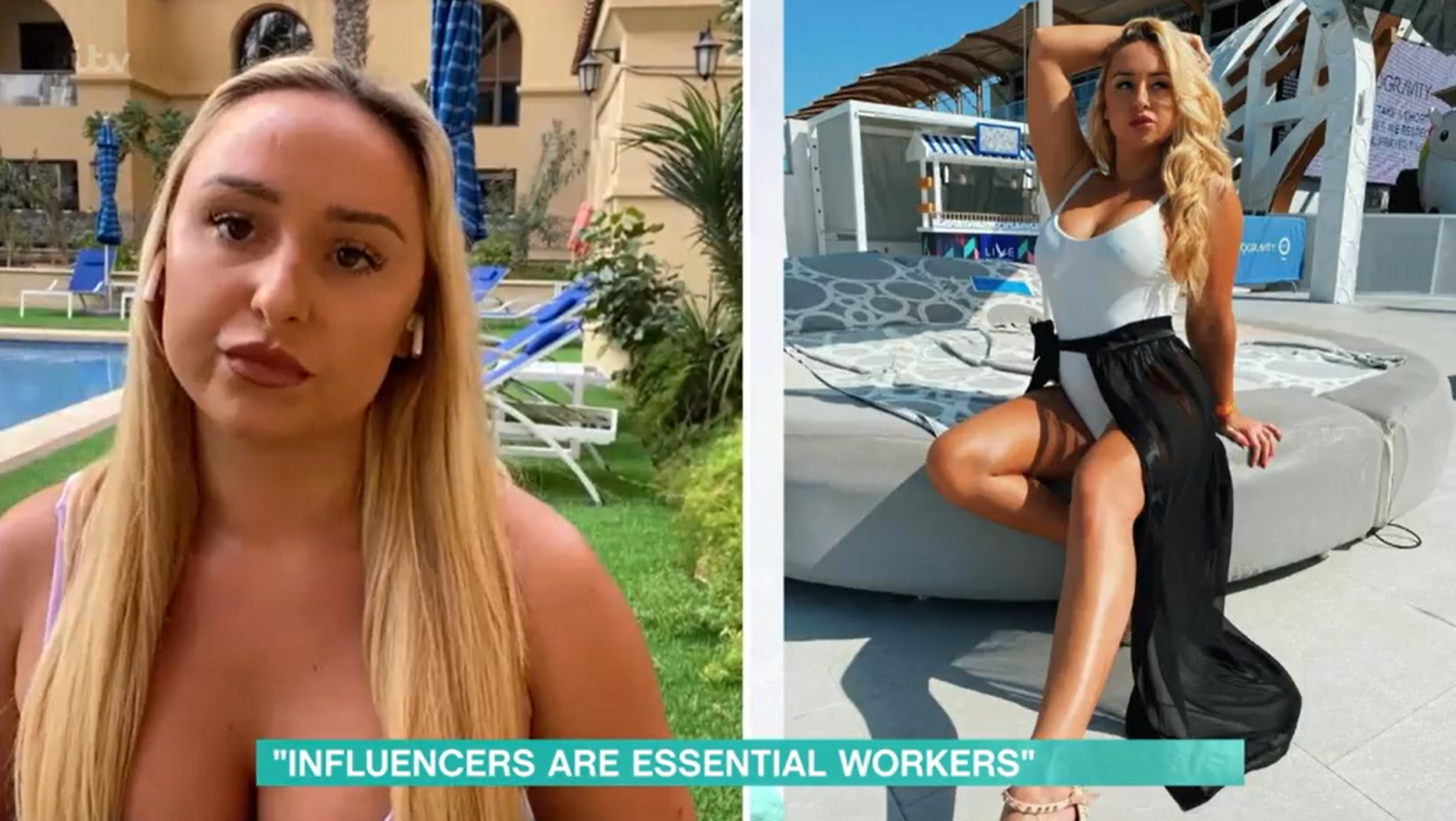 But Holly was having none of it, bringing in the NHS heroes on the frontline as she argued: “When you say ‘be kind’… When we see how stretched the NHS is and the nurses working really, really hard and all they are saying is: ‘Please stay home, do the right thing and stay home’.

“You’re saying ‘be kind’, are you being kind to them by encouraging others to travel by what you deem essential work?”

Sheridan argued: “I’m not trying to influence anyone to come out”, before adding there are lots of other English people in the sun-soaked city as the interview wrapped up.

Viewers at home were left angry by the segment, flocking to Twitter to share their reaction to Sheridan’s comments – and praise Holly and Phil for holding her to account. 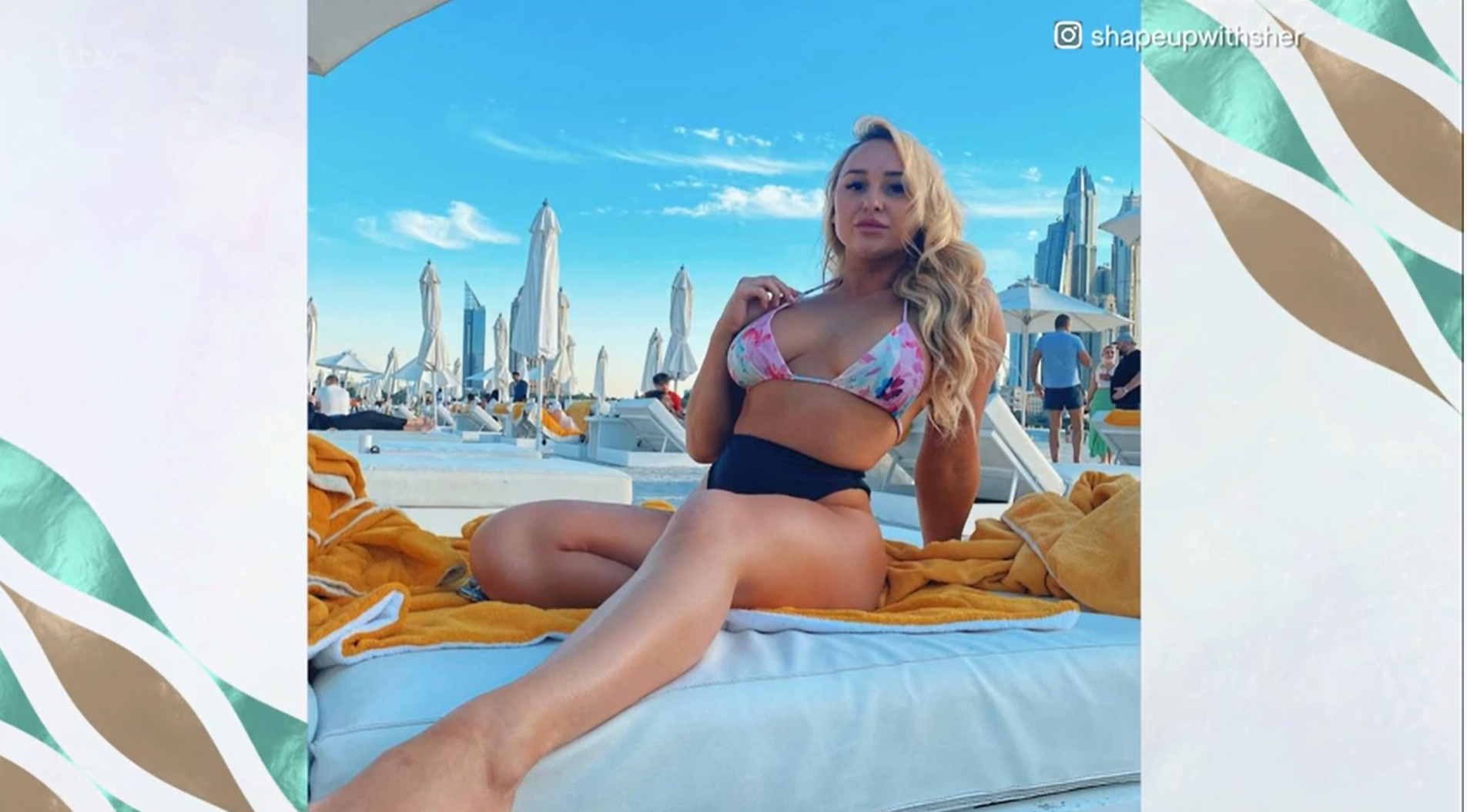 She jetted to Dubai from Tier 4 restrictions

Even TV presenter Les Dennis had a few choice words, tweeting: “I am screaming at the telly watching this influencer trying to justify her trip to Dubai as essential travel.

“Please don’t be influenced by her. Phil and Holly doing a great job holding back their outrage.”

Another viewer wrote: “The whole of the internet is angry about that interview and rightly so. An influencer isn’t essential when she could do that from home.

“And using mental health as an excuse is upsetting to those of us with a mental illness who are unable to go to Dubai like she can.”

The “influencer” on #thismorning … WHAT A LOAD OF S***! Going to Dubai for mental heath & her gym classes. What about everyone else’s mental health & not being able to go to the gym?! ??‍♂️ good on phillip for calling her out on doing something that could be done in her garage!

I have no words. Mostly because I can’t be bothered with selfish people like her. #ThisMorning

I feel so angry after watching the so called ‘influencer’ on @thismorning. Everyone is struggling, everyone’s mental health is worse than before. Have some consideration for all the frontline workers that don’t have the choice to just jet off. Stop being so selfish #thismorning

Theres 100’s of PT’s doing online workouts to do inside your house which will be doing a lot more for peoples mental health than them seeing someone posing by a pool. You do not have to travel to do work outs for your clients ?‍♀️ #ThisMorning

Well done to @hollywills for taking that “influencer” to task on @thismorning #thismorning. What I got from that was that that girl is quite selfish and didn’t have a decent argument to make for her ‘essential travel’.

Literally never heard of her. Failed attempt at mental health card. So much backtracking. Is it for your business? Is it your mental health? Or is it because we all look better with a tan & your pics will get more likes? ?? absolutely moronic ? #ThisMorning

One more agreed: “Sticking two fingers up to our NHS and keyworkers absolutely shocking.

“We would a love to be sunning ourselves in Dubai …disgusting .. shouldn’t have given her the air time !!”

A fourth wrote: “What?!?! Can’t actually believe how this girl is trying to justify being in Dubai! We’re all struggling emotionally – you’re making one big excuse after another”.