All this and Jeremy Paxman too (Picture: Rex Features/BBC)

Quiz-loving audiences can’t get enough of University Challenge, the show that puts the minds of universities and colleges against each other – which is now in its 28th series.

While there’s plenty to enjoy about the BBC Two show, from Jeremy Paxman’s sharpness through to trying to outsmart the teams by answering the questions first, the one thing which always seems to keep us hooked is the contestants.

Because let’s face it, they’re an eclectic bunch.

Aka the Cambridge University student who answered no less than ten starter questions – often before Jeremy Paxman could even finish asking them. Hapax Legomenon anyone?

Possibly one of the smartest people ever to walk through the University Challenge doors, Corpus Christi captain Gail helped her team win a convincing victory after correctly answering two-thirds of all her team’s questions – only to have it snatched away after it transpired one of her fellow team members had already left the college while the series was being filmed. Booooo. Still, Gail went on to even greater things, now working in the Classics department at Trinity College, Oxford.

Will forever be remembered as the man who stood up to Jeremy Paxman when he couldn’t quite understand how he managed to correctly answer a question about Margaret Thatcher. ‘Well what else would it be?’ he said somewhat pointedly. You tell him, Ralph. 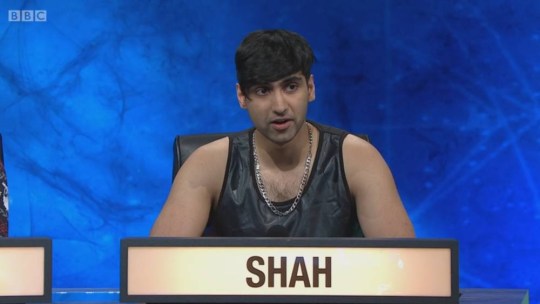 Kaamil Shah melted the internet with his choice of outfit (Picture: BBC)

The Kingston-Upon-Thames native didn’t quite break the internet when he appeared on the show in 2015 wearing a black leather vest and chunky neck chain – but he certainly came close.

Of all the characters we’ve seen grace the current series of the show, Eric Monkman is the one we’ll remember – thanks to his facial expressions, very enthusiastic way of answering questions and simply the fact he’s so darned clever. Not to mention the outpouring of ‘Monkmania’ which erupts on social media every time he’s onscreen. Give the man his own TV show, starting now.

He looks like Harry Potter and he sounds like a forgotten Star Wars hero. There is nothing about this that we dislike.

We couldn’t get enough of 2016 hopeful Sam Fairbrother, a member of the Jesus College Cambridge team – largely due to him taking a leaf out of Shah’s book and gracing the show in a vest, giving him a kind of latter-day ’80s pop star’ look. The day that his team faced off against Monkman’s side against Wolfson College, Cambridge, almost caused the internet to implode, so great was the magnitude of seeing two University Challenge titans in the same room together.

Queen Mary student Kate Lynes created much mirth among viewers earlier this year when she announced that she is studying ‘sphincter preservation’. Twitter went predictably wild until the folks from Queen Mary’s popped up to remind us that it’s actually related to cancer research. Juvenile sniggering over then.

The series that brought us Eric Monkman also gave us Bobby Seagull – the snappily-dressed maths teacher who’s not only friends with Monkman but has also teamed up with him several times post-University Challenge – including on TV show Monkman and Seagull’s Genius Guide To Britain, as well as Radio 4’s Monkman and Seagull’s Polymathic Adventure. You can also catch him on Channel 4 these days as the host of daytime game show The Answer Trap.

Quite aside from having a seriously good name, the brainy American born team captain of 2010 series winners Emmanuel College Cambridge wowed everybody with his prowess, particularly – if this clip is anything to go by – the voiceover man shouting ‘Emmanuel Guttenplan!’ with increasing levels of excitement.

When faced with a question about a classic character created by Charlotte Bronte, this seemingly stumped contestant guessed the answer ‘Inspector Clouseau’. Er…YES.

Yes folks, the man himself was indeed a contestant on the show in 1980 when he was just 23 years old and a student at Queen’s College, Cambridge. Then did it all over again (of sorts at least) against Scumbag College on iconic 80s comedy hit The Young Ones:

No prizes for guessing which appearance everybody remembers…

University Challenge is on BBC Two, Monday nights at 8.30pm. Catch-up with the series so far on BBC iPlayer.