WHO Wants To Be A Millionaire fans were furious as a primary school teacher failed to know the colour of Dory from the Disney classic Finding Nemo.

Viewers could not hide their disbelief as the contestant used TWO lifelines in an attempt to answer the question correctly.

Dan Huxley struggled to answer what colour Dory is from Finding NemoCredit: ITV

Dan Huxley took the chair in the ITV show hosted by Jeremy Clarkson and was doing well until he got to the £8,000 question.

It read: “In the films ‘Finding Nemo’ and ‘Finding Dory’, which of these characters are mainly blue in colour?”

Dan was given the options ‘Marlin’, Dory’, ‘Nemo’ or ‘Bubbles’ but could not give Jeremy an answer.

“I think Nemo is some sort of goldfish, but I don’t know,” he admitted before opting to call his dad. 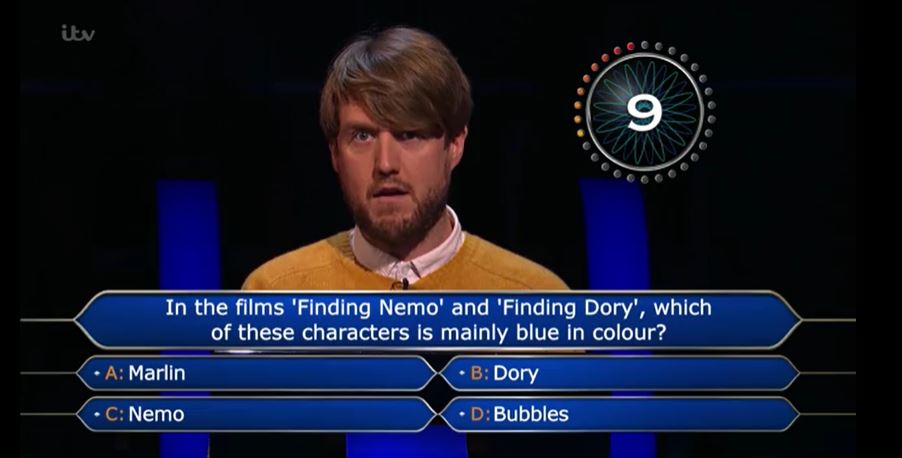 Viewers could not believe he opted to use phone a friend – and called his dadCredit: ITV 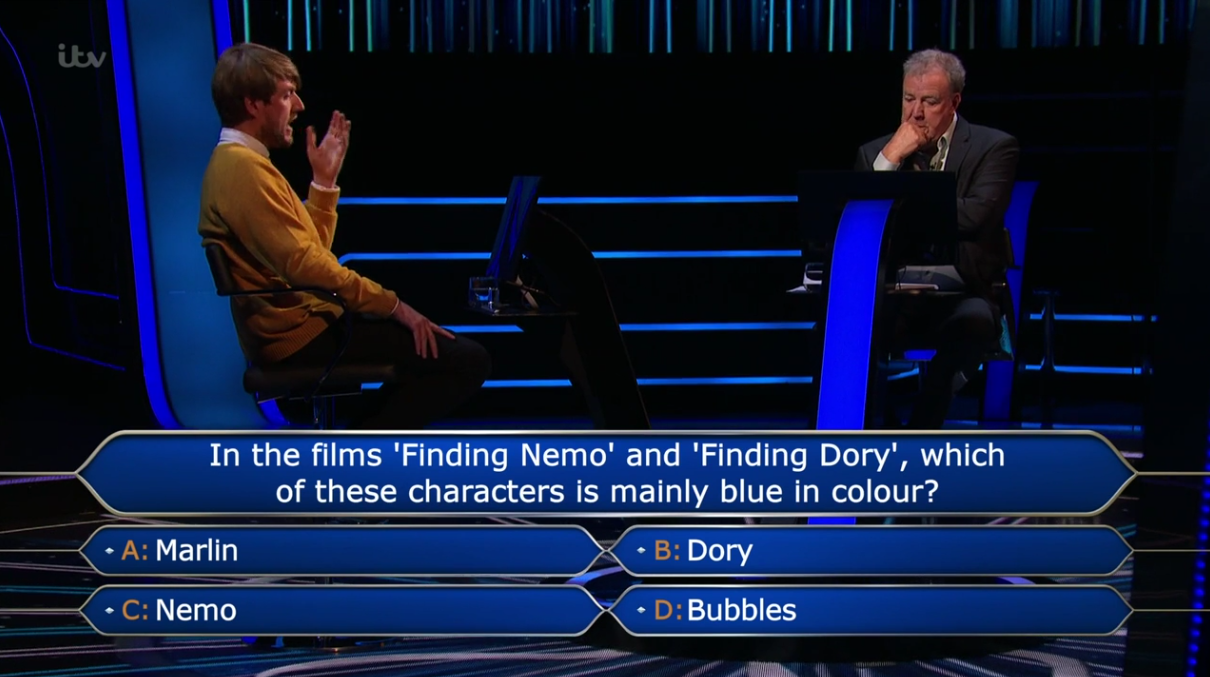 Host Jeremy Clarkson mentioned the fact he was a teacher

Dan explained: “I’m hoping with three grandchildren he may have accidentally seen this film.”

When his dad failed to help, he went for 50/50 as Clarkson goaded him over the fact he was a teacher.

Dan admitted it was “so embarrassing.”

One viewer tweeted: “Literally who doesn’t know that Dory is blue???!! ? #whowantstobeamillionaire”.

One raged: “HOW DO YOU NOT KNOW WHAT COLOUR DORY IS YOU F***ING MORON.”

A third exclaimed: “This guy is a primary teacher and isn’t sure what colour Dory is from Finding Nemo?!”

He finally went for 50/50 before answering correctlyCredit: ITV

“Genuinely pained that a primary school teacher doesn’t know what Finding Nemo character is predominantly blue,” added one fan of the show.

A person queried: “Why did he think his dad would know it? #WhoWantsToBeAMillionaire.”

Thankfully once two options were left – ‘Dory ‘ and ‘Bubbles’ – Dan opted for the correct answer.