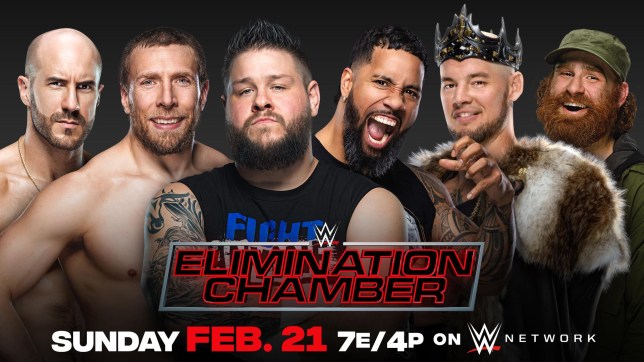 Tonight’s the night – WWE Elimination Chamber comes to the ThunderDome as some of the company’s top stars clash in the punishing environment.

In one of the flagship matches, Drew McIntyre will defend his WWE Title against five former world champions, while the winner of the SmackDown bout will immediately receive a Universal Title shot against Roman Reigns.

This show will have major WrestleMania 37 implications ahead of double header when fans return in April, with the potential for the main event picture on either brand to take a wild turn – particularly with Royal Rumble winner Edge waiting in the wings.

As ever, we’ve put together our monthly guide with full match card, streaming details and more.

When is WWE Elimination Chamber 2021?

WWE Elimination Chamber takes place on tonight (Sunday, February 21) with all the action on the main card kicking off at midnight for fans in the UK.

How can you watch WWE Elimination Chamber 2021?

As ever, the WWE ThunderDome application has come and gone pretty quickly – so let us talk you through the usual ways to tune in.

For fans in the UK, you can tune into the main Elimination Chamber show by either streaming live or watching on demand via the WWE Network – or order the event via BT Sport Box Office.

There is still time for things to change, with six matches currently on the bill – although the Raw Women’s Title match will likely be switched or dropped after Lacey Evans’ pregnancy bombshell.

What can you expect from WWE Elimination Chamber 2021?

WWE looks poised to continue its run of top notch pay-per-view events with another barnstormer on paper, with every match set to deliver in a big way.

With the company well and truly on the Road to WrestleMania, there’s plenty on the line here with some high stake bouts, and look for Drew McIntyre to retain the WWE Championship in the Chamber.

Despite a potentially predictable result, the talent involved will make this a can’t-miss match, particularly with ‘The Fiend’ Bray Wyatt waiting in the wings to get revenge on Randy Orton.

Over on SmackDown, the Universal Title picture will see Roman Reigns continue his march to ‘Mania, with the stipulation meaning a number of stars could win the Chamber only to fall at the next hurdle.

Whether it’s a valiant effort from Daniel Bryan or Kevin Owens, a KofiMania-esque moment for Cesaro or Jey Uso winning only to take the loss for his cousin, there are some intriguing possibilities.

Elsewhere, the United States Title could steal the show with Lashley and Riddle working so well together, and the addition of Keith Lee – if he’s fit to compete – will only help take this match to the next level.

We’ve already discussed the likelihood of the Raw Women’s Title match being dropped or changed, but the tag title contest is an intriguing one with four top level talent – and the potential for a heel turn from Sasha Banks to set up her WrestleMania match with Bianca Belair.