Bobby Lashley, Dexter Lumis and Judgment Day all made an impact (Picture: WWE)

WWE Raw ended in chaos as Dexter Lumis made a shock return after AJ Styles beat The Miz in a blockbuster main event.

Triple H continues to leave his mark after taking over as head of both talent relations and creative following Vince McMahon’s retirement, and his impact was clear on Monday night.

Earlier in the evening, fans started chatting on social media after seeing a car crash in the background of a Kevin Owens interview, while later on the wreckage was shown being towed and security raced through in search of someone.

The mysterious events were largely ignored on camera, but all became (kind of) clear as the night came to an end.

Midway through the night, Bobby Lashley defended the United States Title in a fantastic match against Ciampa, who was finally able to show the main roster audience why he’s held in such high regard.

This was closer to the NXT version of the Blackheart we’ve seen in months, and Ciampa – who paid tribute to Harley Race before his big opportunity – more than held his own in a star making performance before falling to the Hurt Lock.

AJ Styles chased off The Miz after he helped Ciampa avoid a pinfall loss, and it led to the rivals battling each other in a fantastic No DQ main event with the Phenomenal One picking up the win.

After the bell, Styles could be seen staring into the crowd as someone – later confirmed on Instagram to be Lumis, almost four months after his release – was dragged away by police as he tried to jump the barrier.

Raw started with Bayley, Iyo Sky and Dakota Kai discussing their recent return and issues with the women’s roster, which eventually led to Alexa Bliss, Asuka and Bianca Belair interrupting.

The six stars ended up brawling, and we found out they’ll be facing off at Clash At The Castle in Cardiff, Wales next month. 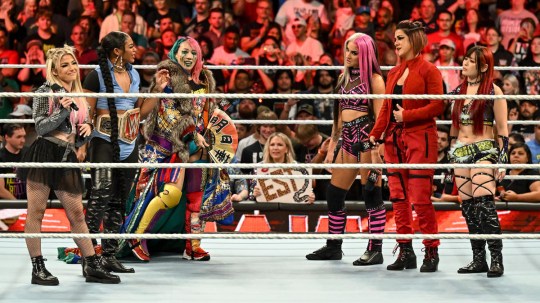 In the first match of the night, Seth Rollins beat Angelo Dawkins as the Street Profits star looked like he belonged, showing off his new physique in the process.

All eyes have understandably been on Montez Ford in recent months and he is clearly a world champion waiting to happen, but fans shouldn’t dismiss Dawkins. 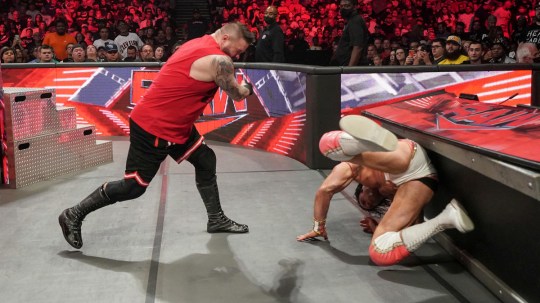 Kevin Owens came out to face Ezekiel as they appeared to reignite their feud, but the former Universal Champion wasn’t messing around as he utterly decimated his rival.

Elias’ younger brother had to be stretchered out after the attack, which saw him hit with a devastating powerbomb onto the apron.

Edge tried to say sorry to Dominik Mysterio for accidentally hitting him with a Spear last week, but Rey’s son wasn’t in the mood to accept the apology. 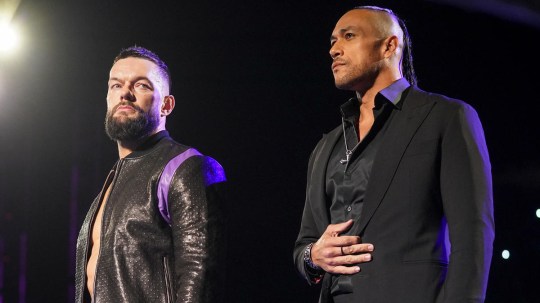 Finn Balor and Damian Priest came out to deal with the Mysterios (Picture: WWE)

Later, Damian Priest accompanied Finn Balor to the ring as the latter faced Rey Mysterio, who had told Edge he didn’t need his support and he was certain Dominik would be there for him.

That wasn’t the case, with the masked legend on his own as he fought Finn in a fantastic bout, with Edge eventually coming down to run off Priest after he tripped Rey.

They fought through the crowd, but Rhea Ripley then appeared carrying a bloody and limp Dom, which provided another distraction as Balor capitalised with a Coup de Grace.

Later on, Omos destroyed two local talents in an absolute squash, before Dolph Ziggler and Chad Gable put their technical skills on display in a fun bout, which the Show Off won with a Superkick.

WWE Raw airs Monday nights at 1am on BT Sport 1.