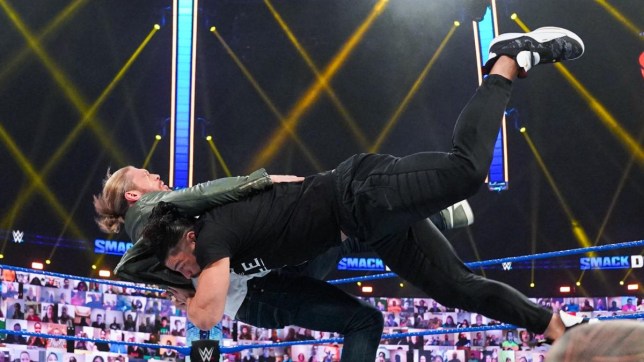 WWE SmackDown continued its impressive run with another great show, with Otis, Roman Reigns and Apollo Crews all having big moments before Elimination Chamber.

The night came to a close with the Universal Champion hitting a Spear on Edge, but there was plenty to dig your teeth into in the build-up to that final moment.

Edge kicked off proceedings as he hyped up his WrestleMania 37 choice, but Reigns interrupted the Royal Rumble winner to insist there is only one option.

Sami Zayn came out just as the champ and potential challenger got in each other’s faces, as the Master Strategist claimed he was being disrespected, only to be hit with a superkick by Jey Uso.

Backstage, Edge interacted with the likes of Kevin Owens, King Corbin, Cesaro and Daniel Bryan throughout the night, continuing to give the rub to other stars during his latest return.

Bryan and Cesaro questioned whether or not KO would turn on them like he has to other partners in the past, in a nice bit of awareness and continuity.

Edge was out for commentary for the main event, which was never going to be a bad match with the wealth of talent involved.

It was what happened after the bell that really shocked, with everyone brawling after Bryan, Cesaro and Owens won, with Edge spearing Jeu Uso only to get caught out of nowhere by Roman with one of his own.

The Tribal Chief stood tall to close the show, potentially giving a hint of what’s to come after the Elimination Chamber this weekend.

Apollo Crews took on Shinsuke Nakamura with Big E on commentary from his own couch, and the pair had a very entertaining match.

The Artist stole the win with a small package, and Crews snapped as he attack after the bell, with the Intercontinental Champion stepping in to stop the beat down.

It only earned him one of his own, with Apollo’s attack hitting another level when he dropped the steel steps from the ring to the floor on top of Big E, who was stretched from the arena. 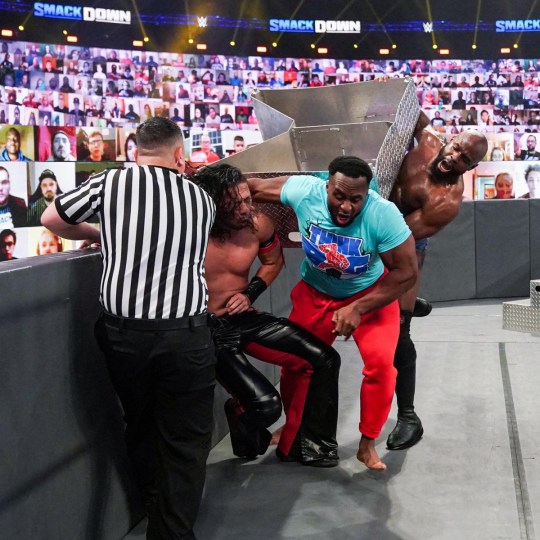 Crews (back) well and truly snapped this week (Photo: WWE)

Seth Rollins had sympathy for E as he made his entrance, and said he was lodging a formal legal complain against the WWE SmackDown roster for ruining his return and not accepting his vision.

Specifically, he targeted Cesaro and warned he would feel his wrath every time he steps in the ring.

Tamina and Natalya defeated the Riott Squad after Bille Kay came out supporting the former duo, but they weren’t interested as they attacked her after the match.

Up next, Bayley was on fire with Ding Dong, Hello as she was joined by Nia Jax and Shayna Baszler, but their trash talking was interrupted by Reginald trying to speak for Sasha Banks and Bianca Belair. 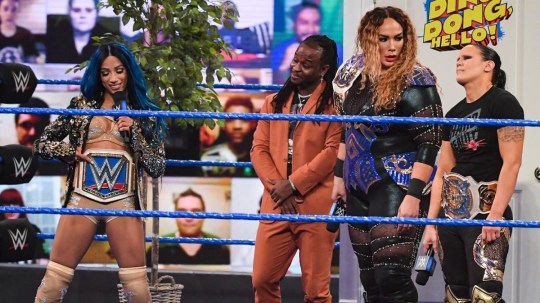 The Legit Boss and EST of WWE came out to speak for themselves, and we eventually had an inter gender six-person tag match set up.

Nia looked strong against Reginald, but he actually picked up the win with the help of his partners – and Carmella later questioned his actions backstage.

Finally, SmackDown Tag Team Champions Dolph Ziggler and Robert Roode were on commentary as Alpha Academy took on Rey and Dominik Mysterio in another entertaining match.

The real story though was Otis snapping and attacking Rey even after the ref called for the DQ, as Gable encouraged the assault.

While Otis seems such a likeable man, it will be interesting to see where WWE takes this heel turn – and it gives the Mysterios something else to do.