The Raw Women’s Champion isn’t ruling anything out (Photo: WWE)

WWE hero Nikki A.S.H. has insisted ‘the door is always open’ for a reunion with Alexa Bliss.

The Scottish superstar, who delighted fans on Monday night as she cashed in her Money In The Bank contract to capture the Raw Women’s Championship 24 hours after winning the briefcase, has held the tag team titles twice with Little Miss Bliss, and she’s not ruling out another run in the future.

She exclusively told Metro.co.uk: ‘Alexa, that was two years of being best friends with someone inside the ring, outside the ring, being two-time Women’s Tag Team Champions.

‘So, Alexa has been on her own journey and her own path, and I would say I’ve been on my own journey and my own path. I don’t see any reason why in the future, if the time is right – I can see those paths cross again.

‘I love Alexa, I’m always here for Alexa, no matter what. Even though she’s on her own path and I’m on mine, I never say never in WWE and I don’t see any reason why that spark couldn’t reconnect, and rekindle that tag team.’

Noting they are on their respective journeys, Nikki – speaking shortly before she debuted her new Almost a Superhero persona – added: ‘The door is always open!’ 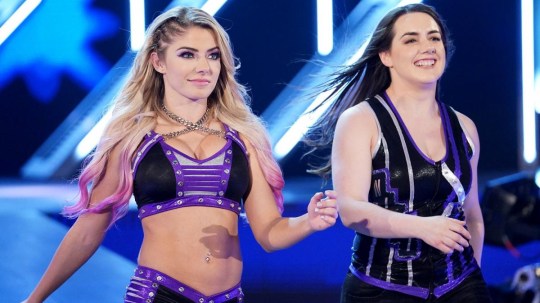 Alexa and Nikki ruled the tag division in the past (Photo: WWE)

The Raw Women’s Champ heaped praise on Bliss, who has gone onto become one of the more sinister character’s in WWE history after being aligned with ‘The Fiend’ Bray Wyatt last year.

‘Alexa Bliss is one of the most talented women I’ve ever had the pleasure of working with. I’m so excited fans get to see this new side of her, and I’m excited for fans to see new sides of me too,’ she teased.

Nikki has gone onto embrace a full character change as she now dons a bright mask and cape to inspire herself and others, and even before the big reveal she discussed how happy she is for fans to see other sides to her and Alexa.

‘Since NXT, I’ve always just tried to show different layers of Nikki Cross as a person and as a character,’ she smiled.

Now, Nikki is on top of the Raw roster, and she was clearly delighted as she shared kind words from fans and fellow wrestlers on social media.

She wrote: ‘I did that. Go tell that little Scottish girl who dreamed of this moment…… the 18 year old girl who joined a small wrestling school in Glasgow, who traveled the world to achieve her dream.

‘Go tell her: You did damn good little Nikki. (sic)’