ALMOST one in seven people in the UK could be unemployed by the end of this year if a second coronavirus wave washes over the country.

This would see the UK’s unemployment rate rise to 14.8 per cent, meaning around 5million people would be out of work, according to new data from the Organisation for Economic Co-operation and Development (OECD). 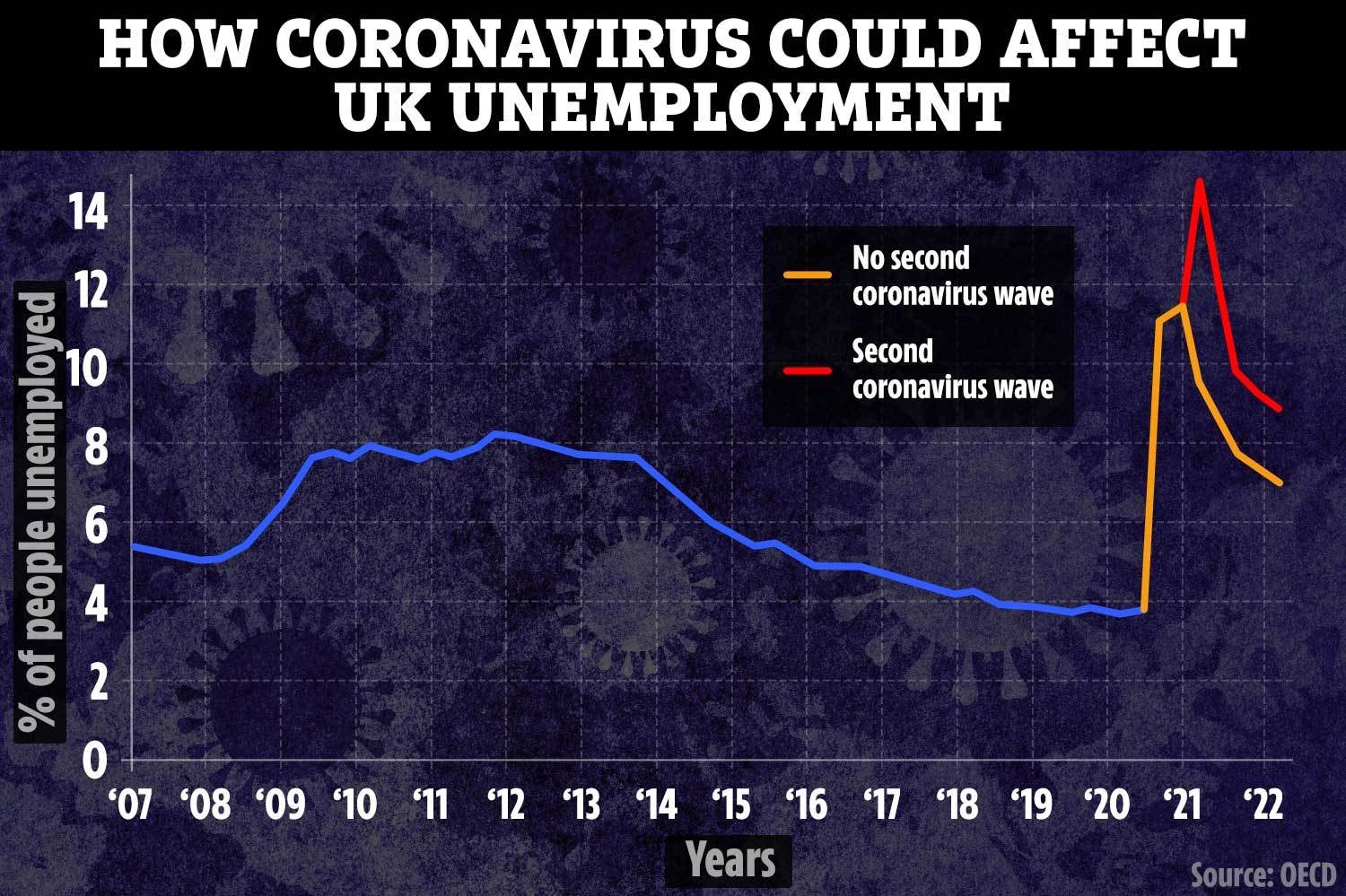 A second coronavirus wave could cause the unemployment rate to jump to 14.8 per cent

In comparison, there were 1.36million people unemployed in the three months from December 2019 to February 2020 before the epidemic hit, according to Office for National Statistics (ONS) data.

That corresponds to an unemployment rate of 4 per cent or one in 25 people, says the OECD.

But even without a second wave of infections, the OECD says the UK’s unemployment rate is likely to reach a record high of up to 11.7 per cent by the end of this year.

It warns that global job losses could take unemployment rates to levels more comparable to the 1930s than during the financial crash of 2008.

THE aim of the government’s job retention scheme is to save one million workers from becoming unemployed due to the lockdown.

Under the scheme, the government will pay 80 per cent – up to £2,500 a month – of wages of an employee who can’t work because of the impact of coronavirus.

Workers will be kept on the payroll rather than being laid off.

The scheme has been extended to run until the end of September (although businesses will be asked to chip in from August) and can be backdated to March 1 2020.

It’s available to all employees that started a PAYE payroll scheme on or before March 1, 2020.

If you’re between jobs, have started at a new place of work or were made redundant after this date then you can ask your former employer to rehire you to be eligible for the scheme.

Employers can choose to top up furloughed workers’ salaries by the remaining 20 per cent but they don’t have to.

Firms who want to access the scheme will need to speak to their employees before putting them on furlough.

Previous rules meant that staff shouldn’t undertake any work for their employers while on furlough.

But from July 1, staff members are allowed to go back part-time and they must be paid in full for the hours that they work.

Unemployment is expected to fall to 7.2 per cent in 2021 if there is no second wave, but the OECD says that’s still a big jump compared to pre-coronavirus levels.

And the OECD cautions that younger people could be hardest hit.

More than 9.3million workers in the UK have been furloughed due to the crisis, and experts have warned redundancies could be on the cards as employers have to start contributing towards the scheme from August.

Chancellor Rishi Sunak is preparing a mini-Budget for tomorrow that’s expected to tackle the economic impact of the coronavirus crisis, as well as looking at how to get people back into work.

It’s thought Mr Sunak will announce that 270,000 more young people are set to benefit from jobs advice through a £32million investment in the National Careers Service.

Mr Sunak is also believed to confirm one of the largest increases in front line Jobcentre staff on Wednesday, doubling the number of work coaches to 27,000.

Earlier this week the government revealed that firms in England will get a £1,000 bonus for every 18- to 24-year-old new trainee they take on from September.

OECD director of employment, labour and social affairs Stefano Scarpetta said: “Only in a matter of three to four months, in terms of unemployment, we have gone back to where we peaked after the 2008 financial crisis.

“I think we are talking about an impact on the labour market, which is unfortunately closer to the Great Depression more than the financial crisis – the impact is massive.”

The OECD warned last month that the British economy would face a major hit from the Covid-19 pandemic.

It expects quarterly GDP to drop 11.5 per cent in 2020, and warns it could fall by up to 14 per cent if there is a second wave later in the year.

The UK’s GDP fell by 10.4 per cent in the three months to April, according to the latest ONS figures – the biggest quarterly drop on record.

OECD secretary-general Angel Gurria said: “These numbers do not convey the massive hardship that is implied by an increase in unemployment of this scale.

“The young are once again at risk of becoming the biggest losers of the crisis.”