THE FTSE 100 opened 1% down this morning after US President Donald Trump and First Lady Melania tested positive for coronavirus. 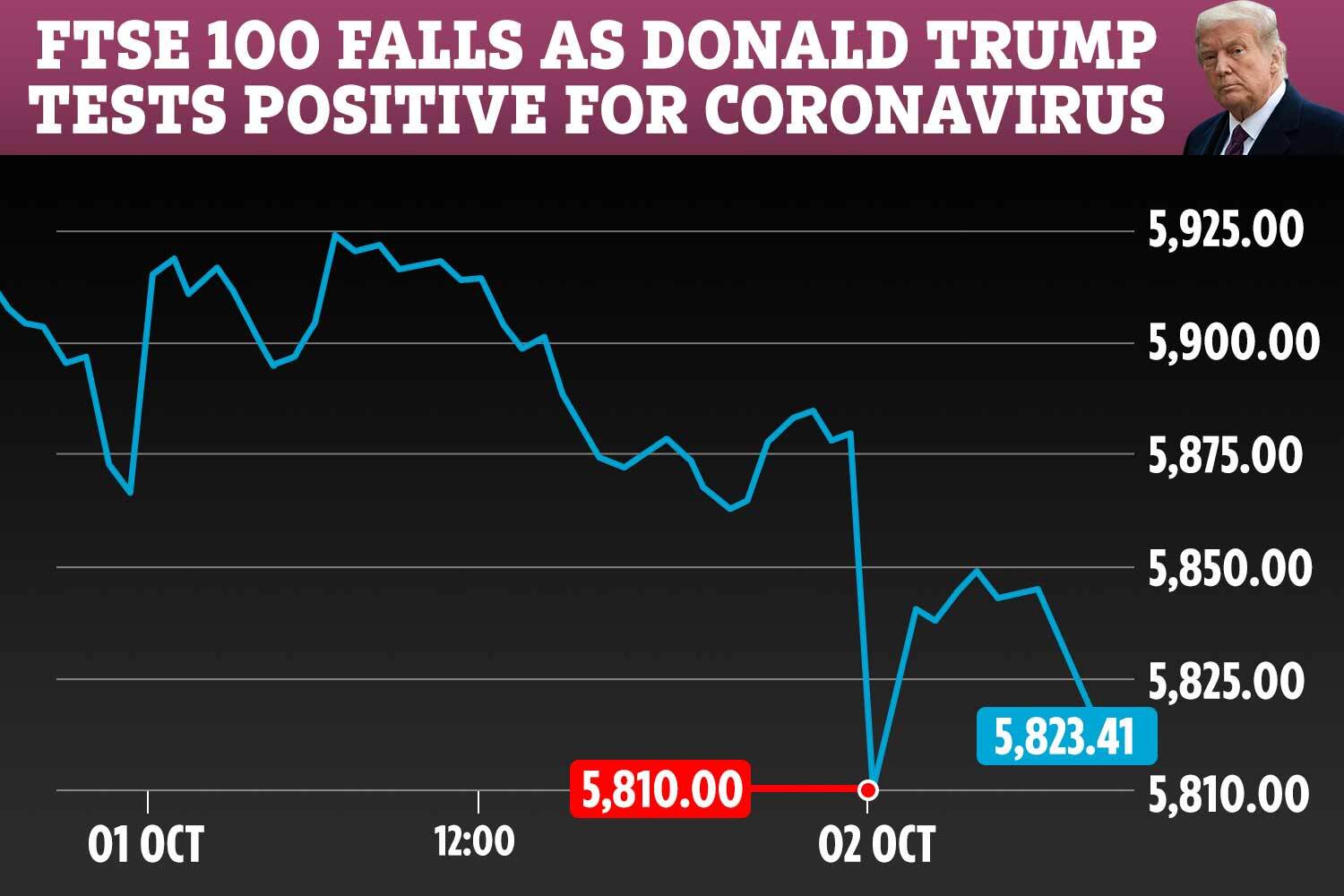 The plunge was described as the worst day since “Black Monday” in 1987, with the fall wiping £160billion off shares.

Since then, the economy has shown positive signs of recovery since lockdown restrictions were eased.

How the FTSE 100 falling affects your personal finances

FALLS in the stock market can affect your finances in a number of ways, here we explain how.

Pensions – If you save cash into a pension scheme where the provider invests your money, you’ll likely see the value of your pension drop when the FTSE 100 falls.

But keep in mind that with retirement savings, you’re investing for the long-term so the drop in value isn’t likely to be permanent.

Instead, you’ll see your retirement savings grow again once the stock market recovers.

Savings and mortgages – There is no direct link between the stock market and your mortgage or savings accounts.

But if panic on the stock market spreads to the wider economy, the Bank of England may cut interest rates. Interest rates are currently held at 0.1%.

This means your mortgage is likely to get cheaper, while savers will suffer from lower interest rates.

We’ve explained how the interest rate cut will affect your finances here.

Sterling – The value of the pound often rises if the FTSE 100 falls.

This is because many of the firms on the index earns a significant amount of cash in the US.

But again, exchange rates are also volatile and there are many factors that make them rise and fall.

At its highest point over the last six months, the Footsie registered 6,484.300 points on June 5.

The FTSE 100 consists of shares from the 100 biggest companies on the London Stock Exchange – so its performance is often seen as an indicator of business activity in the UK.

Companies that suffered this morning include Rolls-Royce, which saw its shares drop around 6% shortly after markets opened.

Melrose, a British company that specialises in buying and improving underperforming businesses, shares also fell by 5%, and Ocado dropped by 3%.

As well as the President testing positive for coronavirus, market commentators suggest stocks may have also moved due to weak oil prices.

At the time of writing, the price of Brent crude oil and West Texas Intermediate was down 3%, slipping to $39 a barrel and $37 a barrel respectively.

Russ Mould, investment director at AJ Bell, said: “Donald Trump catching coronavirus has put the markets in a mild state of disarray. One could view the market reaction as investors increasing the probability that rival Joe Biden will win the election.

“Oil prices were also weak on Friday, two signals that suggest the latest decline in equity markets may not entirely be caused by Mr Trump testing positive.”

The latest market movement comes after the FTSE saw its worst day in three months on September 21, when it dropped by 3.45% in one day.

Meanwhile, the UK economy was confirmed to have plunged by 19.8% between April and June – although the drop wasn’t as bad as had been expected.

Gross domestic product (GDP) had been predicted to shrink by 20.4% during the peak of lockdown.

But there are fears that tougher lockdown measures could cause the economy to crash again, particularly when the furlough scheme ends in October.