600-year-old tidal mill in Cornwall is up for sale for £3.5million

The former tidal mill is on the market for £3.5million (Picture: Savills/BNPS)

Have you heard the news?

Everyone’s keen to move to Cornwall right now. Following the arrival of Covid-19, Brits’ most desired location has changed from London to Cornwall, likely due to a renewed appreciation for being by the sea… and the rise of remote work meaning there’s less of a need to be in the capital city.

For those wanting to make the move, this property opportunity might be appealing.

Not only is this house in the stunning area of the Tamar Valley, it’s also got a rich history.

The Old Mill is over 600 years old, having originally been built as two properties – the tidal mill itself and the mill house, which the owner lived in.

It was remodelled in 1613 and again in the 1800s, and the two buildings were combined into one home. 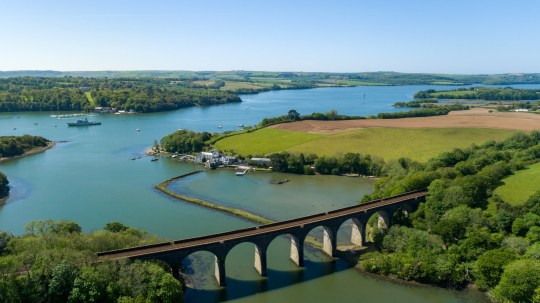 The house has views of the Forder Railway Viaduct (Picture: Savills/BNPS)

The Grade II listed six-bedroom house has its own private harbour and incredibly views of the Forder Railway Viaduct, which was built to carry the Brunel railway to Penzance.

It sits in eight acres of lush land, on the banks of Forder Lake and the Lynher River.

The current owners’ family bought the house in 1970 but they are now relocating to be closer to relatives.

All the bedrooms have water views and there is a bar with a stable door that opens onto the quayside with seating areas overlooking the harbour.

Inside, there’s 5,433 sq ft of living space, with a kitchen and breakfast room, a sitting room, a dining room, a morning room, a living room, a study, and a bar on the ground floor. 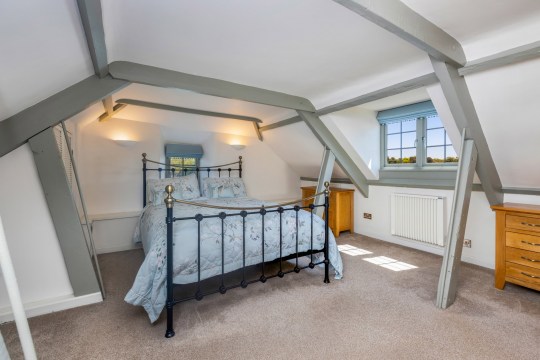 This is only the second time the six-bedroom property in Cornwall has been on the market since 1886 and agents Savills say it is a once in a lifetime opportunity (Picture: Savills/BNPS)

Go up a level and you’ll find six bedrooms and five bathrooms.

There’s also a 50ft storeroom or workshop in the basement, with doors leading to the quayside terraces, and a double garage with a studio abive.

That studio was used by the owners for yoga, but you could repurpose it however you like. It has a Juliette balcony overlooking the harbour, so it’s a great space.

In addition to the main house, there’s a stone-built two-bedroom cottage with views over Forder Lake and its own waterside garden.

The property has a private mill pond with listed walls, which attracts a lot of birdlife, and a private woodland.

The mill pond provides an exclusive private harbour complete with gangway, modern pontoons and moorings which can support a number of boats and other craft together with electricity and water supply. There is also a slipway. 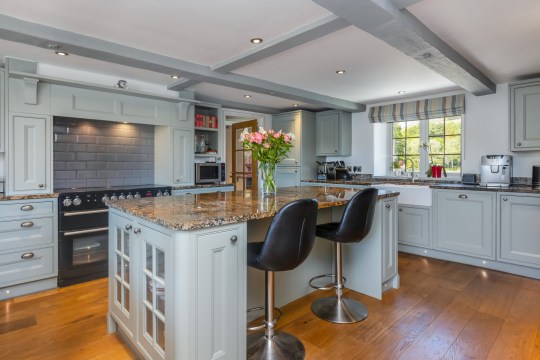 Sarah-Jane Bingham-Chick, from Savills, said: ‘The Old Mill is so special, it’s not often you come across something like that.

‘Old Mill feels like a backdrop to where Swallows and Amazons meets The Railway Children… and I have no doubt The Famous Five would have loved it too!

‘With the Forder viaduct, which carries the main London to Cornwall line, it’s ideal for train enthusiasts as well as those who love the water.

‘This ticks all the boxes. There’s a little jetty where the owners keep their boat and you can be in Plymouth in 20 minutes if you want to go for a night out, there’s lots of marinas there where you can park up.

‘It’s a lifestyle property, strictly in Cornwall but very close to Devon and you can be in London by train within a few hours.’