Imogen and Tom’s house has been transformed (Picture: Jam Press)

Imogen Hewitt and partner Tom found their dream place to live – a small village in Cheshire – but they couldn’t afford any of the properties.

Instead of giving up on the location, they focused on finding run down places they could transform and ended up with a three-bedroom house for £205,000.

Now, after doing the work themselves to keep costs down, they’ve added £50,000 to the property value.

Imogen, 28, who works as a marketing manager, and Tom, 30, a planning officer for a local council, bought the house in August 2018.

In between their full-time jobs, they managed to complete their renovations on weekday evenings and the weekends, giving the home a complete overhaul.

‘We knew the village that we wanted to live in but unfortunately the house prices were out of budget for the type of house we wanted,’ Imogen said.

‘We managed to find a house that had been on the market for a while and had been reduced in price. 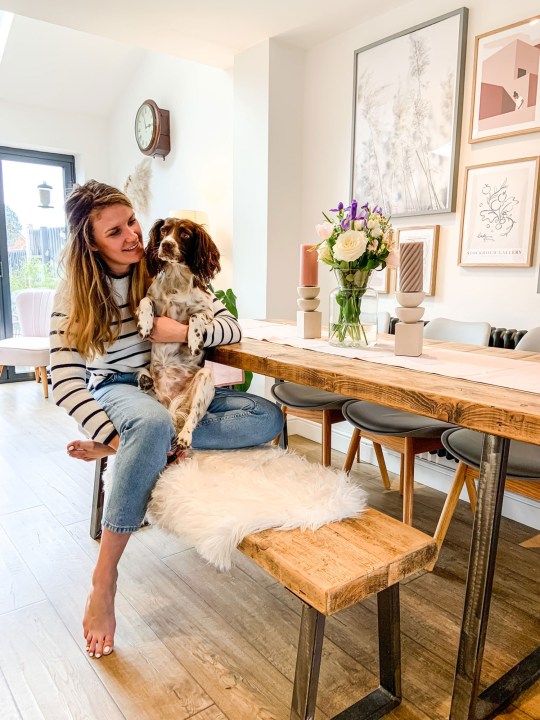 Imogen and her dog willow in the completed home (Picture: Jam Press/@homeforwillow) 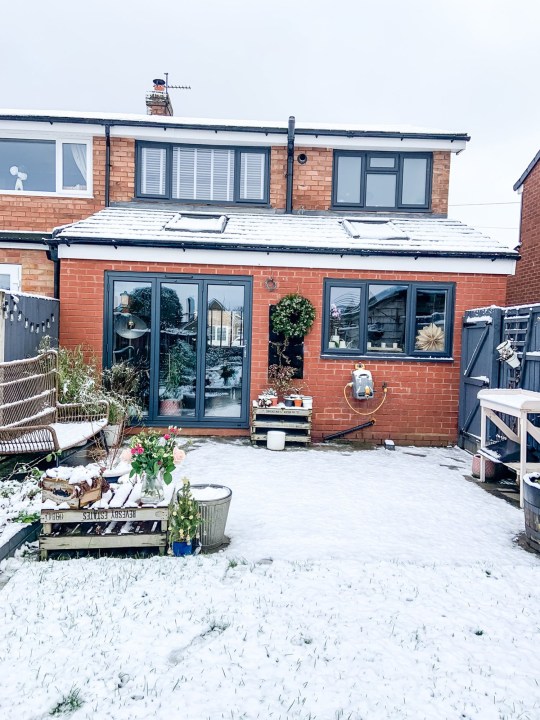 The rear of the property after (Picture: Jam Press/@homeforwillow)

‘The style needed updating and the layout didn’t work for us but we were prepared to do the work and already had some money saved to do so.

‘We wanted our downstairs kitchen and dining layout to work in more of a social space when hosting people as we’re both big foodies and like hosting for friends and family.’

They started by painting the bedrooms and adding new carpets before replacing all the windows upstairs, costing £890 in total.

In the main bedroom, the couple spent an extra £1,640 plastering the ceiling, adding new windows, carpet and paint.

To create more light and space, they knocked down the wall between the kitchen and dining room, adding £12,000 to their bill, and installed bi-fold doors and Velux windows, setting them back £1,750. 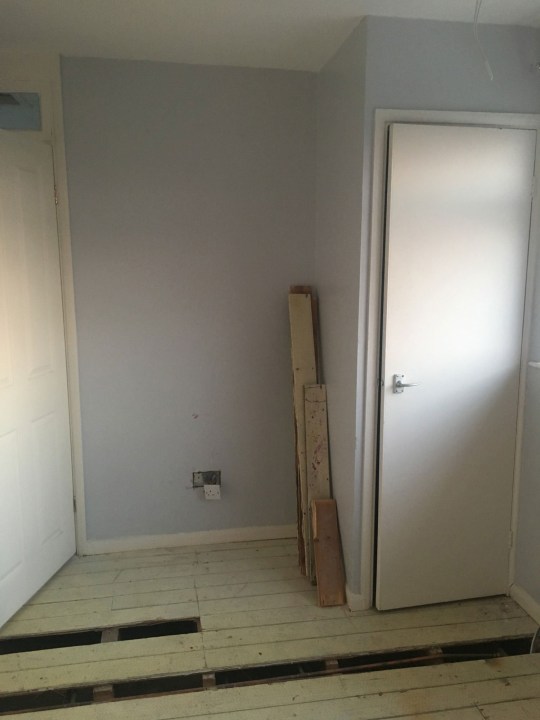 The spare bedroom during the work (Picture: Jam Press/@homeforwillow) 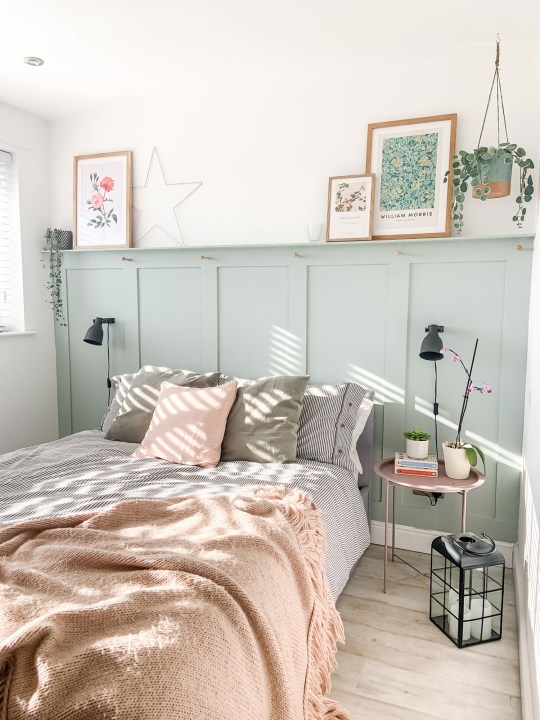 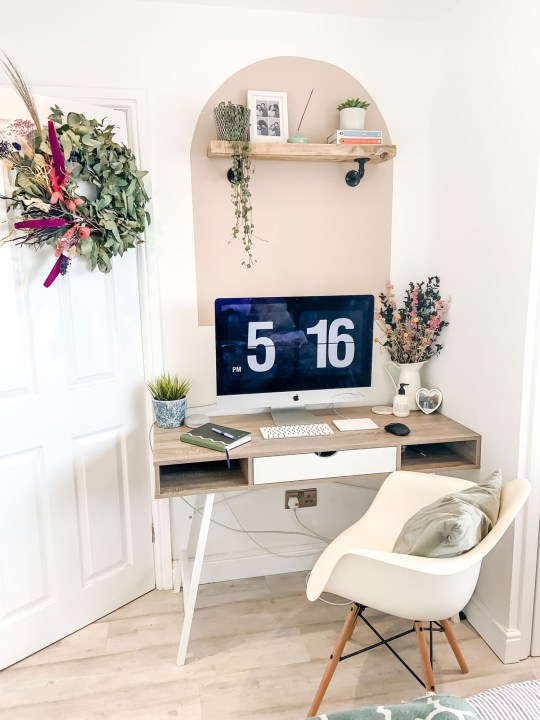 The spare bedroom, which also has an office space (Picture: Jam Press/@homeforwillow) 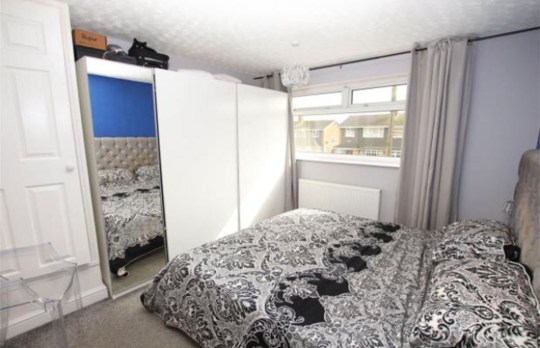 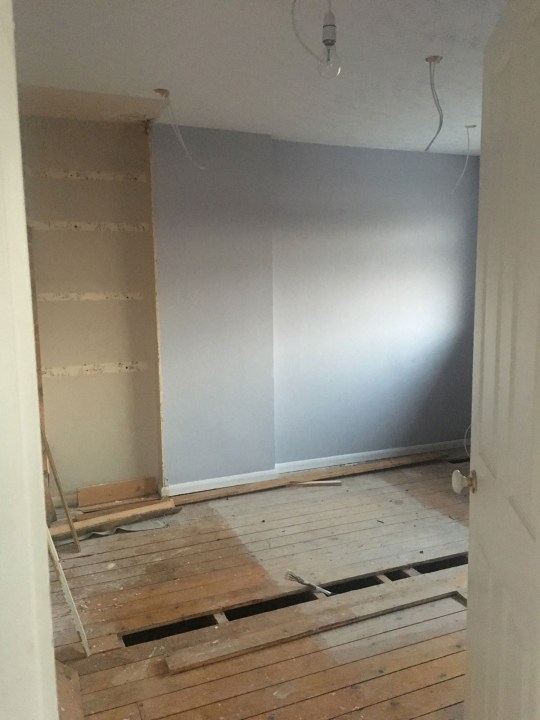 The main bedroom during the renovation (Picture: Jam Press/@homeforwillow) 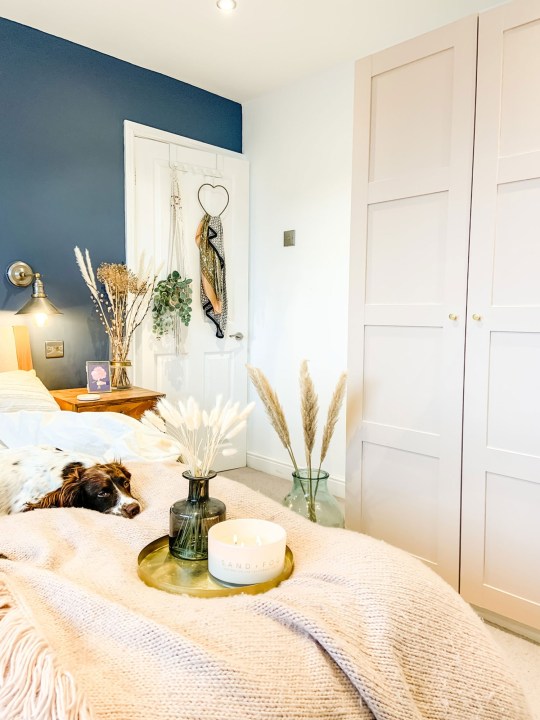 For the living room, they painted, put in a new window and had a new laminate floor fitted, costing £2,940 in total, and added a gorgeous fireplace and a log burner, which cost £1,200.

For the spare bedroom, Tom and Imogen painted and changed the skirting, as well as laminate flooring and a new window – setting them back £1,340.

They also added some panelling to the room, adding an additional £30 to costs. 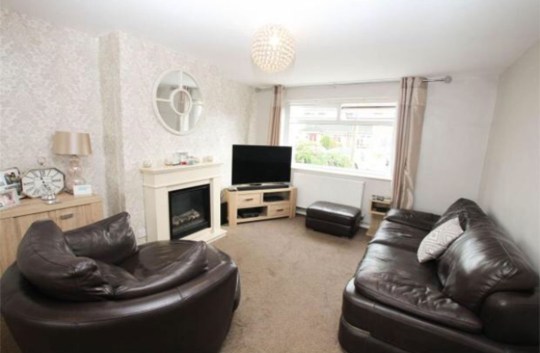 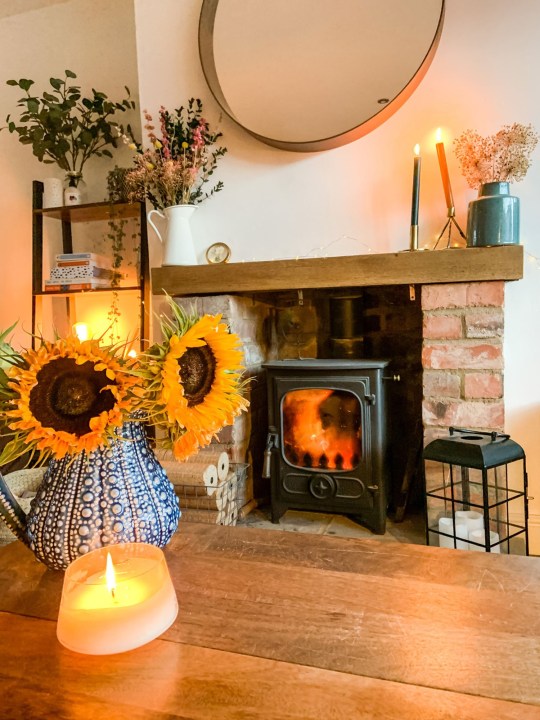 They added a wood burning stove to the living room (Picture: Jam Press/@homeforwillow) 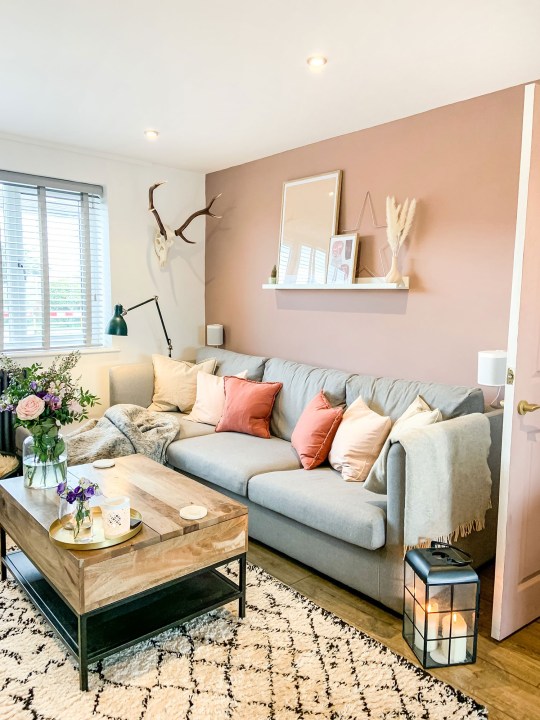 The couple spruced up their office with a new coat of paint, fresh skirting, more laminate flooring and another new window, spending £770 on the space.

For the bathroom, they installed new fittings costing £675, painted and added bathroom tiles costing them £200. Alongside paint and additional materials, they spent £1,305 on the space.

The couple also revamped their hallway, replastering their ceiling for £350, adding a new carpet for £250 and painted the walls and bannisters which cost a further £50. 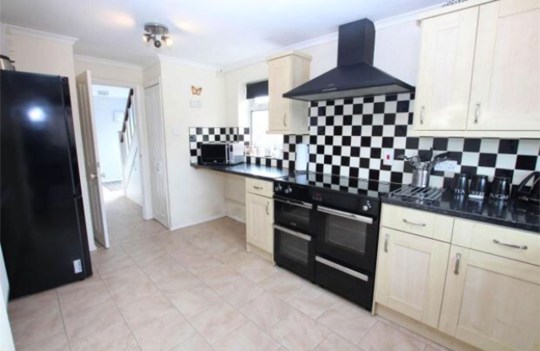 The kitchen before (Picture: Jam Press/@homeforwillow) 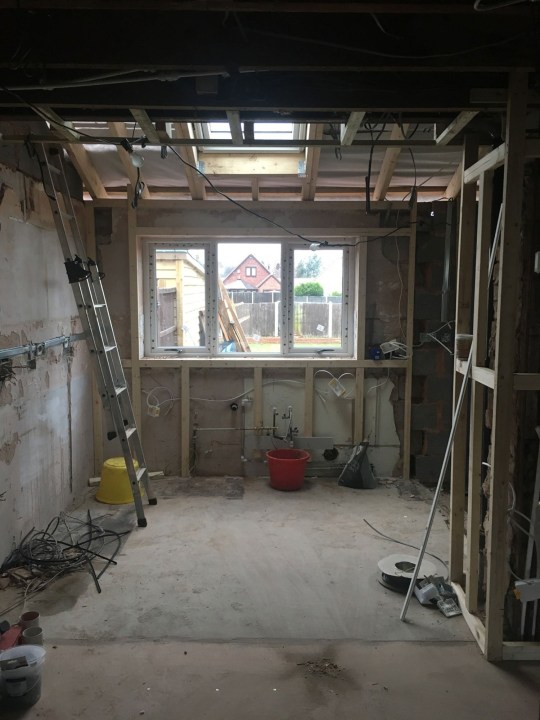 The kitchen and dining room were knocked together (Picture: Jam Press/@homeforwillow) 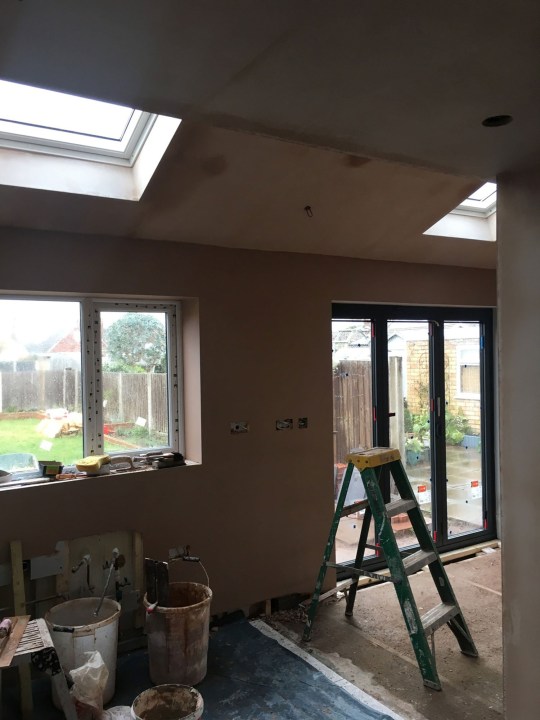 Bifold doors were added at the back (Picture: Jam Press/@homeforwillow) 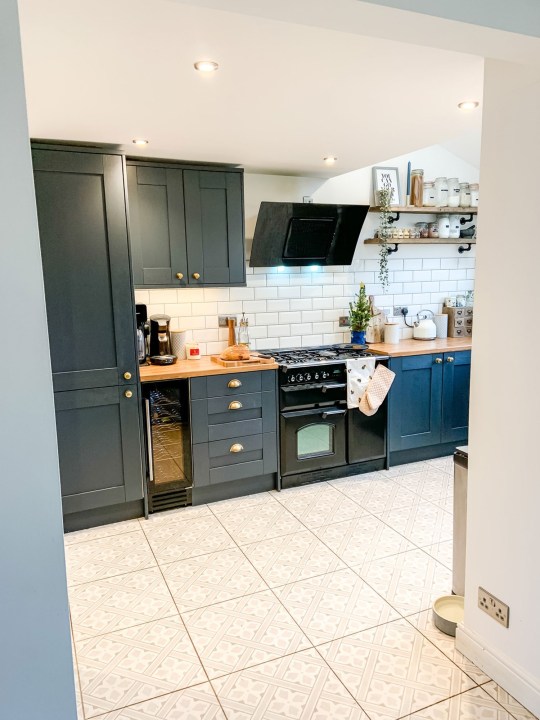 The kitchen after (Picture: Jam Press/@homeforwillow) 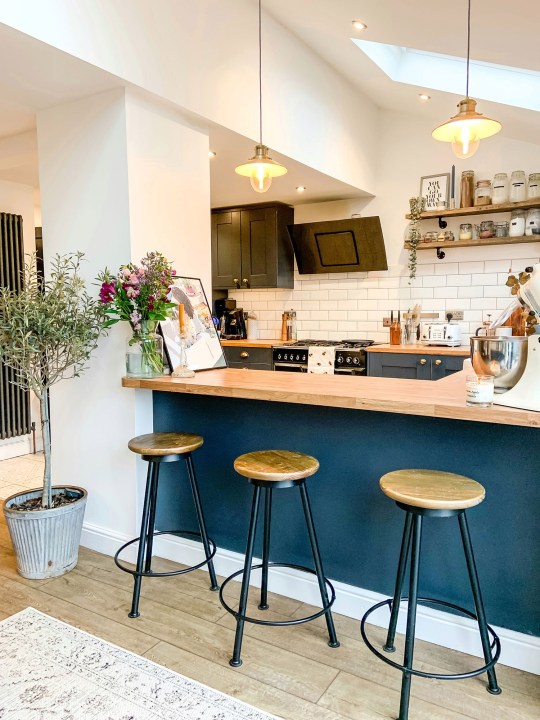 The kitchen, with the breakfast bar (Picture: Jam Press/@homeforwillow) 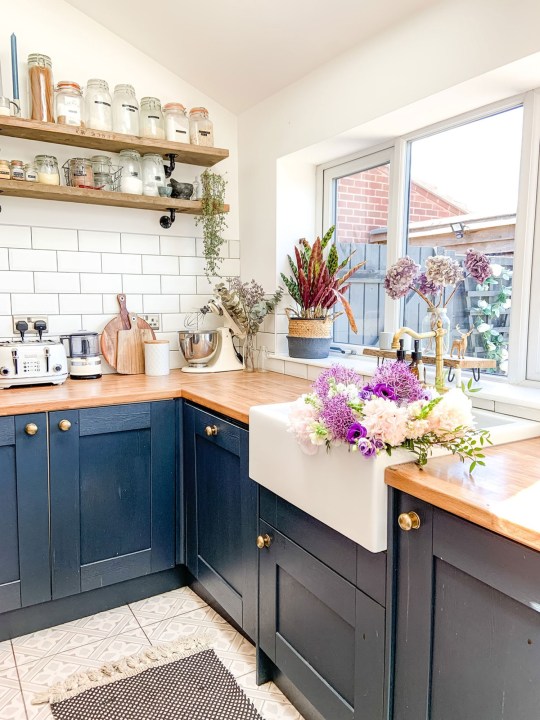 Extra costs included a new front door costing £800 and a new cladding to the front of the house, costing £1,000.

They ended up rewiring the entire house which was done by a family friend, costing £1,500.

Imogen said: ‘It was very stressful in the beginning – especially when you start knocking walls down and uncovering more problems that you didn’t know about, and that will inevitably result in more money being thrown at it. 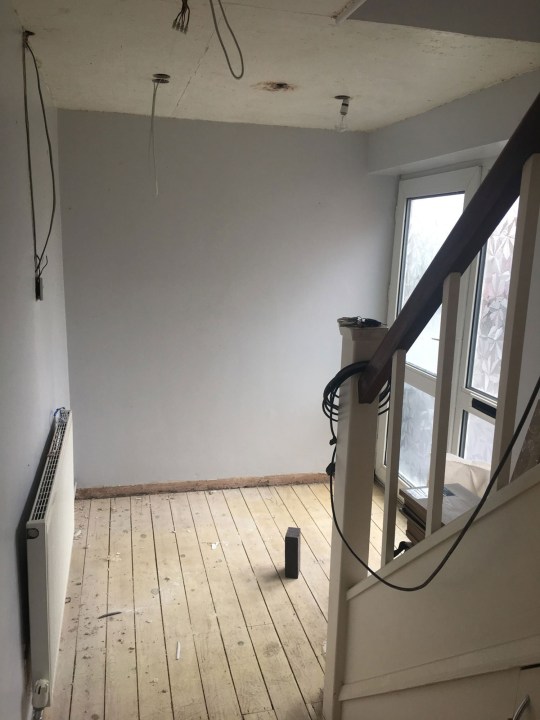 The hallway while work was being done (Picture: Jam Press/@homeforwillow) 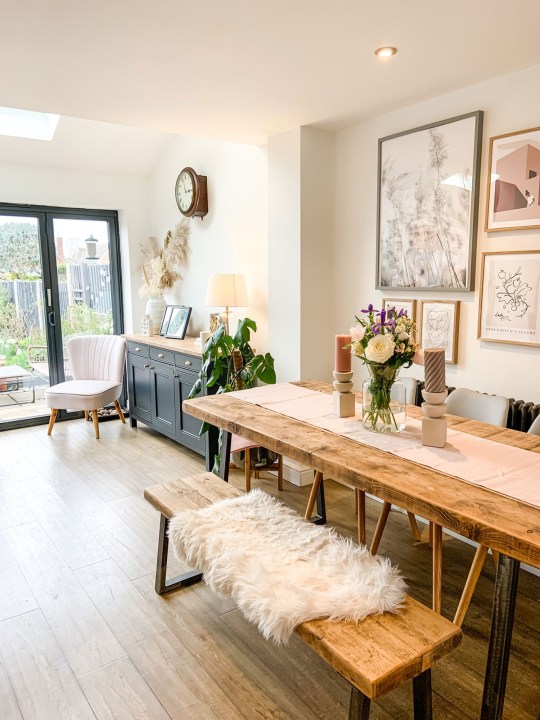 ‘But when it finally starts to come together just how you envisioned, that’s the most rewarding part.’

In a few words of advice to others who wish to renovate their home, Imogen urged other renovators not to play it safe.

She added: ‘We were undecided about whether we should go for the dark navy kitchen of our dreams or play it safe with a neutral kitchen that might make the house easier to sell on afterwards.

‘But in the end, we decided on the navy kitchen and haven’t looked back, and we still get so many compliments about it.

‘I think you just have to go with your gut and trust that it will all come together in the end – and if not, you can always paint.’

Britain’s last sonar hull from a HMS Destroyer get converted

One of London’s skinniest houses is on the market for £800,000… despite being only 13-foot wide