When Daniel Sebek and his wife, Indrani Halady, began flat hunting in west London back in 2018, there were two things about which they were adamant.

‘We were convinced we didn’t want a flat in a mansion block, or one that was on a lower ground floor,’ Daniel says. ‘But, incredibly enough, the perfect one turned out to be both those things.’

It was the wonderful period architecture of red-brick apartment building Aubrey House, and its atmospheric location by the towpaths of the Regent’s Canal, in Little Venice, W2, that convinced them they had found the right place to raise their baby daughter, who arrived soon after they had completed on the flat.

‘As soon as we walked around Little Venice, we were in love,’ says Daniel, who heads up the international arm of a US-based business. ‘It was such a beautiful, calm oasis in a fantastic central location.’ 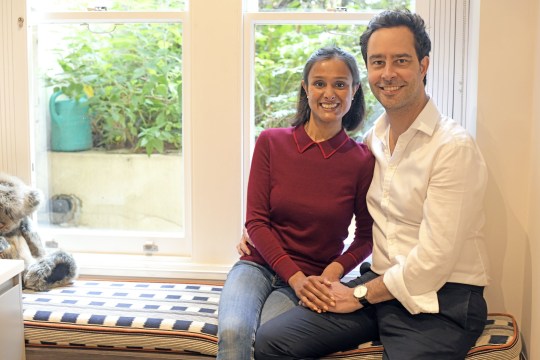 At just 895sq ft, the two-bedroom flat was certainly bijou, says Indrani, who was raised in the Philippines as an expat, went to business school in France and now works for an international organisational consulting firm.

‘The floors were covered in lino, there were patches of damp, and the kitchen was outdated,’ she says.

‘But we could immediately see its potential. The rooms were flooded with light, and there were fabulous shared communal gardens at the rear.’

The couple’s renovation of the apartment is a masterclass in transforming a neglected, unimaginatively laid out apartment into a bespoke family home with space-saving solutions and photoshoot-worthy décor. 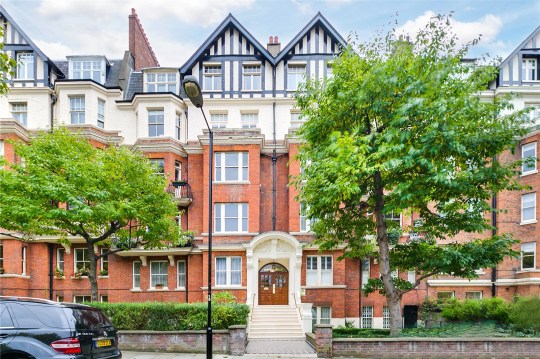 The flat is in a beautiful mansion block 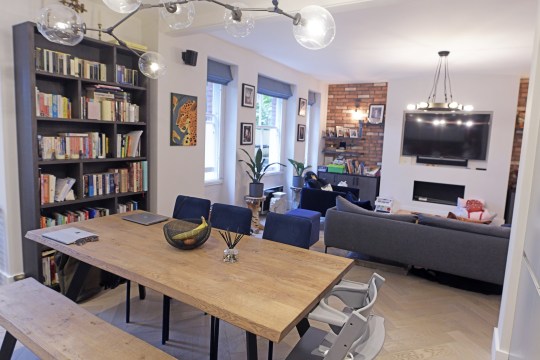 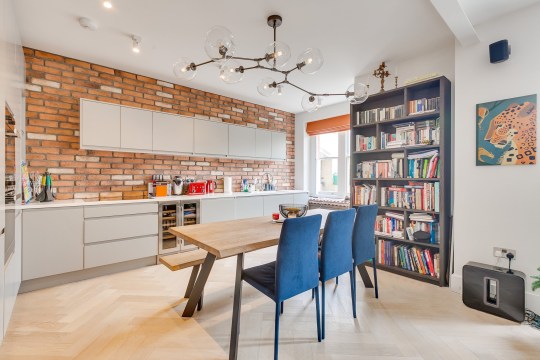 The kitchen is bright and airy

Having a hefty build and makeover budget of around £250,000 and an interior designer, Ewelina Skiba, to hand certainly helped.

But the couple oversaw the process every step of the way, and not just the glossy, fun stuff: there was three months of negotiation needed between surveyors and the 22-flat building’s managing agents to get final approvals on the structural work they wanted to do.

And further challenges came when their builders and kitchen company went bust during the pandemic.

Today, the flat is barely recognisable from the day the couple first viewed it. The original 26ft 8in by 18ft 4in master bedroom has been put to more practical use, and is now the open-plan kitchen/dining/reception space, with pale herringbone flooring and two red brick feature walls, created in homage to Aubrey House’s impressive exterior. 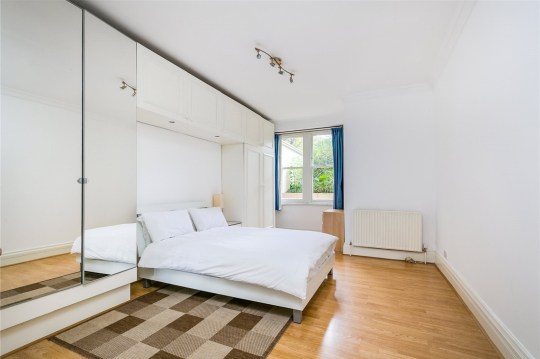 Before: The oddly shaped master bedroom 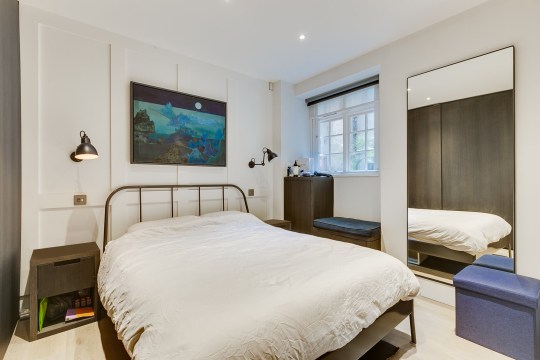 After: A much cosier and more practical bedroom 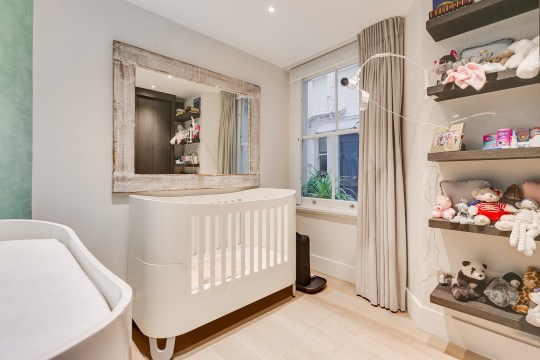 The smaller, second bedroom is now the nursery for their toddler daughter and a second bathroom has been niftily incorporated. No expense-spared styling certainly makes up for any lack of square footage.

‘We were prepared to go slightly over budget as we wanted to really maximise our enjoyment of the flat,’ Indrani says. ‘We didn’t want it to have the formulaic look of a buy-to-let, but to give it real character. We spent weekends exploring different parts of London looking at tiling, light switches and door handles.’

Underfloor heating runs throughout the flat – meaning crucial living and storage space isn’t taken up by radiators – and atmospheric lighting is provided by vintage Edison-style models and the £2,000-plus eight smoky-globed Berlin Pendant light, hanging over the Heal’s dining table. 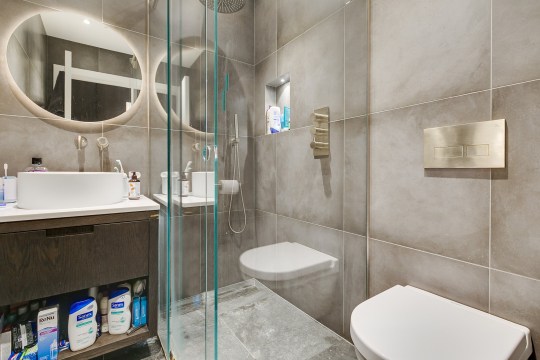 Custom-made furniture company Estimus.co.uk created the bespoke wardrobes in the main bedroom, which have dedicated spaces for not only clothes but ties, jewellery, handbags and cufflinks.

Elsewhere, craftily designed benches hide away laundry and the Sonos sound system – music is pumped into every room, including the bathrooms.

Despite their meticulous makeover, the couple have put the flat on the market, for £1million including a share of the freehold.

‘We really don’t want to leave, as we love the flat, and have become part of a very strong community in both Aubrey House and the area in general, but we know that at some point we will need more space,’ Daniel says.

Having caught the renovation bug, they are now considering taking on a bigger project, in Kensal Rise or Queen’s Park. We reckon it’s bound to be another showstopper. 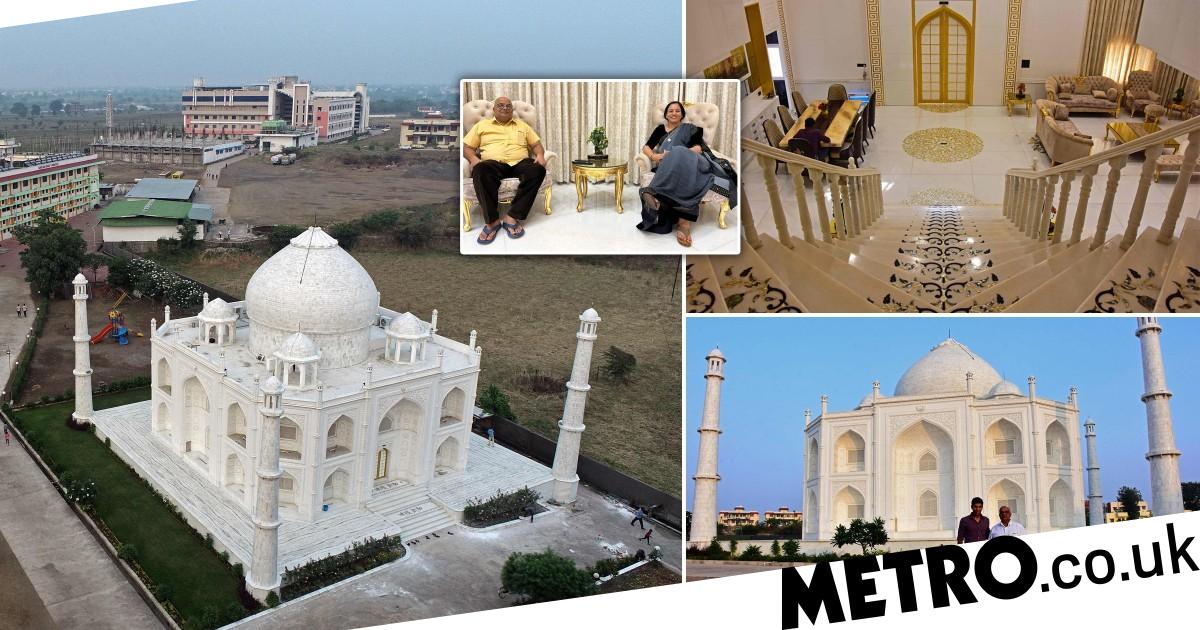 The structure is seriously impressive (Picture: Getty/Caters)Sure, flowers are romantic but has a man ever built you a replica of...

What I Rent: Anju, $1,300 a month for a studio apartment in Washington DC