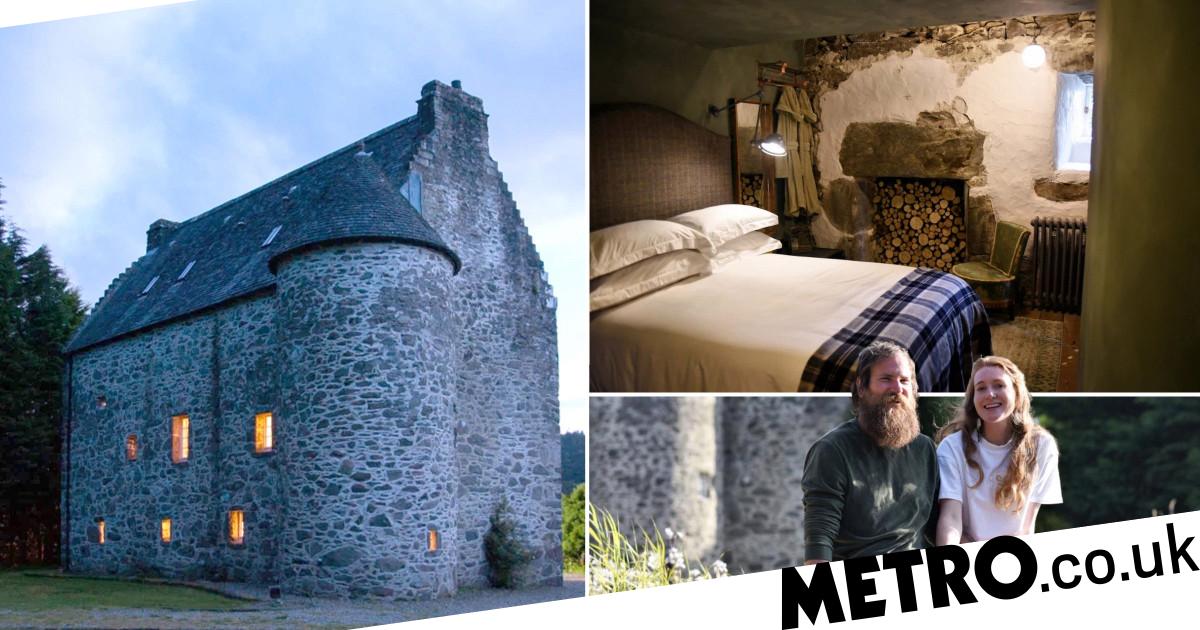 Kilmartin Castle was built when Mary Queen of Scots was on the throne, and now it’s fit for royalty again (Picture: Alan Amper/ Bill Baillie/ Metro.co.uk)

The pluckiest renovator might baulk at the thought of taking on a dilapidated 16th-century Scottish castle.

For novice DIY-ers Stef Burgon and Simon Hunt – who say they egged each other on with the hare-brained scheme – their 2019 restoration of Kilmartin Castle, a turreted, fairytale-worthy Z-plan tower house overlooking ancient Kilmartin Glen in Argyll, on Scotland’s west coast, was a petrifying process, well beyond what they had bargained for.

‘Talk about being out of your comfort zone,’ laughs Simon, from the castle’s kitchen fireplace window seat he recently built.

‘It has been a terrifying adventure both physically and financially, taking a long time to find people we can trust to work with, and dealing with the fact everything always runs over when it comes to time and money.

‘Throwing Covid into the mix has been tough. We’ve experienced a lot of worry and anxiety.’

Today, with all the finishing touches to the castle made, it’s hard to imagine the wild thrill ride that has brought them to this moment.

Near Lochgilphead, about 30 miles from Oban, Kilmartin Castle serves as both an immaculately revamped historic home and new Scottish staycation hot spot, with updated plumbing and heating systems and a watertight roof, as well as five snug yet stylish bedrooms, with their own copper bathtubs, wood-burning stoves and hand-painted antique furniture. 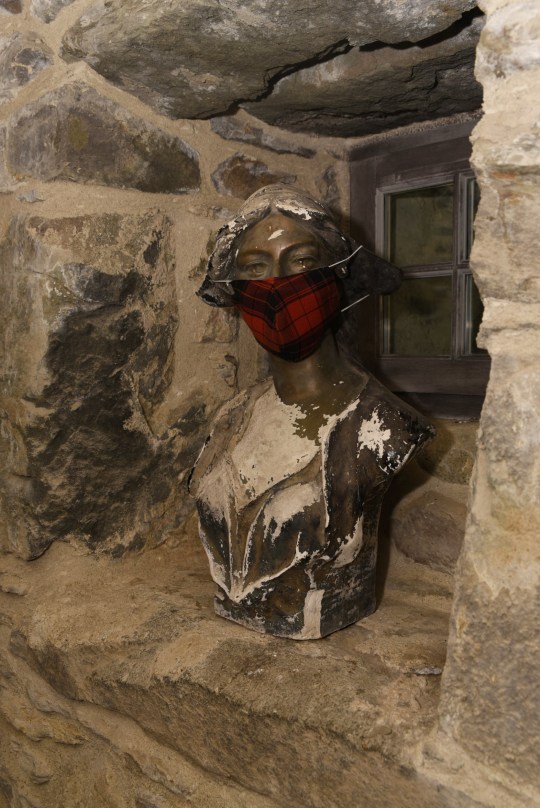 The B&B is ready for visitors (Picture: Bill Baillie) 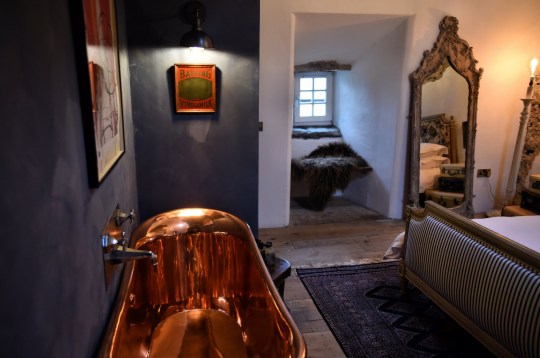 Each of the bedrooms has its own statement copper tub (Picture: Bill Baillie)

Much of the coaxing of the castle into the 21st century was done by Stef and Simon themselves: despite not having any DIY skills to start, they are now proficient wielders of heavy-duty machinery and power tools, comfortable knocking through walls and designing room layouts, and are expert furniture upcyclers.

So how did the couple, who before buying the castle both had heady media jobs in Dubai, find themselves the new custodians of Kilmartin Castle?

‘Stef presented Dubai’s biggest breakfast radio show and I was a creative director for an experiential ad agency,’ Australia-born Simon says. ‘But we were completely uninspired with our daily grind.’

A winter road trip exploring Scotland’s dramatic west coast in 2014 was the kick-off point. ‘It felt like the food our souls desperately needed,’ Stef, originally from Newcastle in New South Wales, says.

‘On our return to Dubai, we realised how much we missed the scenery, and wondered if this was that big life change we had been searching for.’

By extraordinary serendipity, shortly after their return to Dubai – where they rented a contemporary first-floor studio flat opposite the gravity-defying, 828-metre tall Burj Khalifa – Stef came across an article about Kilmartin Castle being up for sale.

Enticed by its headline, ‘Buy a Scottish Castle for the same price as a London parking space!’, within days, they had flown back to Scotland to view it, and sold everything they owned to buy it, for £331,000. 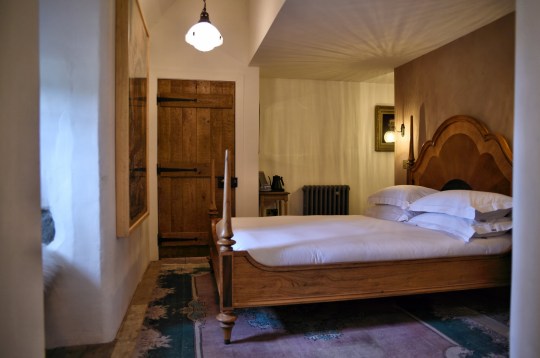 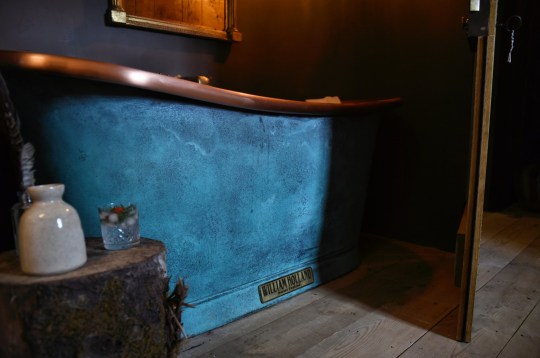 The couple have mixed old and new to create an eclectic style (Picture: Bill Baillie)

For the next four years, they saved their salaries and plotted their grand restoration of the castle, originally built in 1550 (when Mary Queen of Scots was on the throne).

Before tackling Kilmartin’s structural needs, the pair spent the summer of 2018 on an epic shopping trip around Europe in their camper van, taking along their cat, Frank, a stray they saved in Dubai.

Knowing they were happiest when surrounded by old and new, they hunted down ‘incredible original artworks, a gorgeous antique French bed, busts, antique mirrors and some very cool antique cast-iron bases that we have used in bathrooms to put sinks on’, Stef says.

Her favourite finds include an ostrich-egg lamp from France and a painting of a bearded lady that had hung in a Paris club in the 1960s.

When they finally started renovations, they lived in their van in the grounds for seven months. 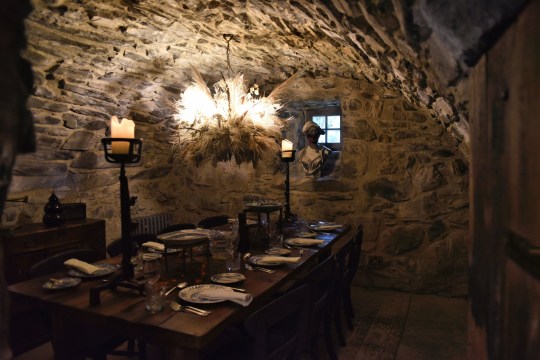 Guests can eat together in the candlelit dining room (Picture: Bill Baillie) 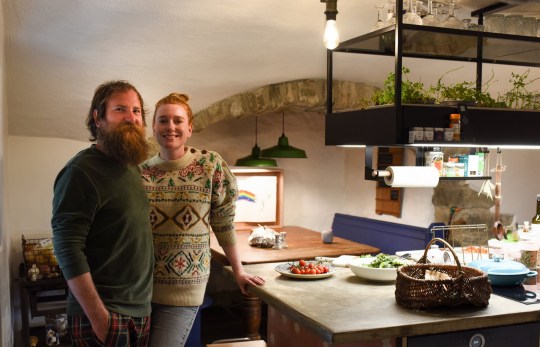 The couple splurged on a £3,000 Spazio cooker hood for their custom kitchen (Picture: Bill Baillie)

Although the castle had already been resurrected from a ruin into a basic three-bedroom home in the 1990s by its last owners – who spotted it while rambling in the area – to create the sumptuous home and staycation venue they wanted was going to take the rest of their money, and involve pretty much every power tool in the catalogue.

‘When we moved to Scotland to start renovations in 2019, our budget was around £80,000,’ Simon says. ‘However, it was well off the mark. We must have spent, to date, around the purchase price again.’

A key part of the first stage of renovation – documented in Channel 4 show The Great Hotel Escape – was adding two further bedrooms and redesigning the kitchen using sustainable birch ply and concrete tops.

Here, their big indulgence is the £3,000 Spazio cooker hood by Falmec, incorporating storage, lighting, a charger station and a spice rack.

Despite the couple’s anxiety over losing business, lockdowns have also given them the chance to make improvements that would have made welcoming guests impossible. Although a new damp-proofing course had been laid on the ground floor, the castle flooded last November.

‘We discovered that over the last 500 years, the ground has been slowly creeping up around the castle walls, so we needed to lower it,’ Simon says. They also had to dig trenches round the building for proper drainage.

The pair insist they have no regrets about taking on Kilmartin, but are aware it is a huge responsibility.

‘We understand that we are purely the guardians of this castle, and we feel the pressure to do everything properly,’ Simon says. ‘We know it will be here a lot longer than we will.’

Prices start from £190 for a double room per night B&B and go up to £330 for a kingsize room. The five-bedroom castle can be rented exclusively from £580 per night. Click here for more details. 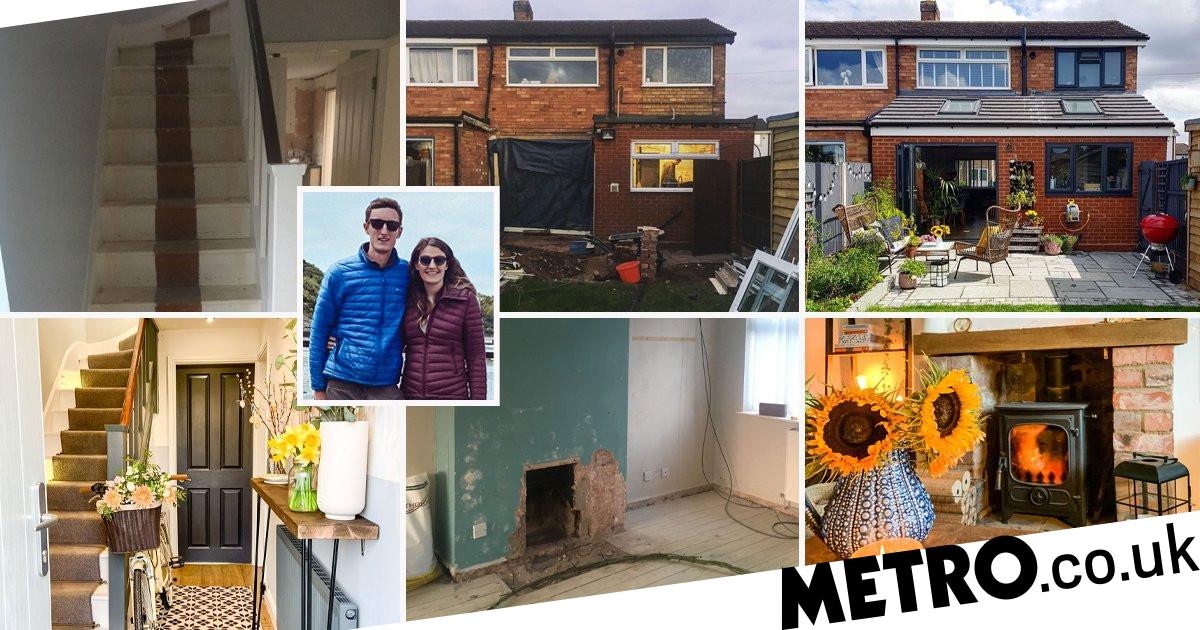 Imogen and Tom’s house has been transformed (Picture: Jam Press)Imogen Hewitt and partner Tom found their dream place to live...