Two years ago, when Francesca Gaskin bought her Victorian two-up, two-down in Bristol, her focus wasn’t just on property investment.

For the ex-model agent turned designer, it was the chance to fuse the two great passions in her life: sustainability and the Burning Man event, that unbridled celebration of counterculture, creativity and self-identity, held (when pandemic restrictions aren’t in place) in Nevada’s Black Rock Desert.

A self-proclaimed die-hard Londoner, Francesca realised she had been priced out of the possibility of owning a home in the capital, and paid £298,000 for the red-brick Victorian house, which she describes as ‘the worst house I could find in St Werburgh’s, just within my price range’.

Drawn to the area’s arty and alternative vibe, and its central location, she was committed to finding a rundown house that she could make truly her own, and one in which she wouldn’t create waste.

‘I didn’t want to rip out a perfectly good kitchen just because it wasn’t to my taste, for example,’ she says. Instead, she plumped for a pad with yellowing, nicotine-stained walls, a rickety kitchen, old beige carpets and net curtains. 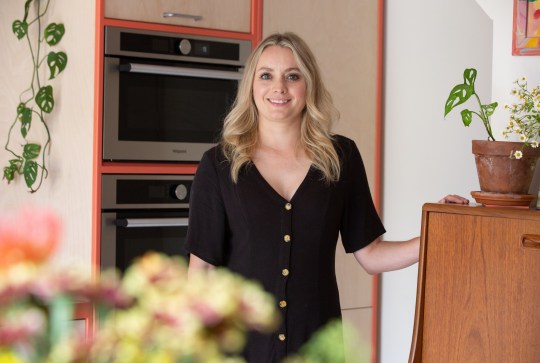 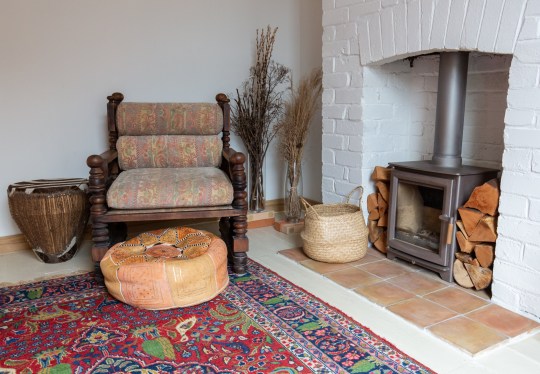 ‘I saw houses for around the same price that were in better condition,’ says Francesca, 36, who studied interior architecture at Leeds University and is the founder of sustainable design company Jetsam Made, specialising in bespoke kitchens and furniture.

‘But this was exactly what I wanted — somewhere I could make completely my own, and which could work as a showcase for the company.

‘However, having moved into the house in July 2019, I headed straight off to the desert for a few weeks.’

Volunteering in Burning Man’s Department of Public Works — a 700-strong team of ‘Burners’ who build the event’s fantastical focal point, the ephemeral metropolis of Black Rock City — has honed Francesca’s attitude to building and joinery, skills she had learned while working at Pirate music studios on her move to Bristol.

‘Years of working in the desert means that as well as always thinking about any impact on the environment, I have always tried things out for myself before asking someone else for help,’ Francesca says.

‘Obviously, there are some things you need to use a professional for, but there is a lot you can do yourself.’

Her one-woman renovation is a testament to the power of self-reliance, creative thinking — and sheer hard graft. Having lost her job at Pirate due to the pandemic, Francesca began working on the house the day the March 2020 lockdown began. 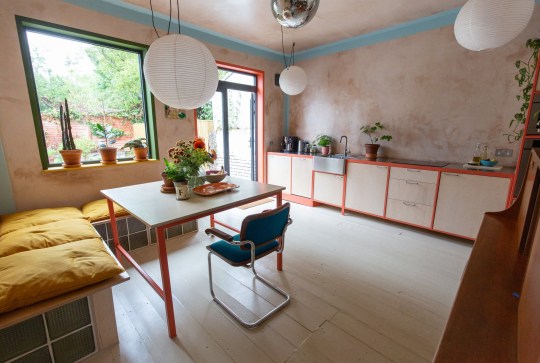 The blue cornicing in the kitchen represents the blue Nevada sky 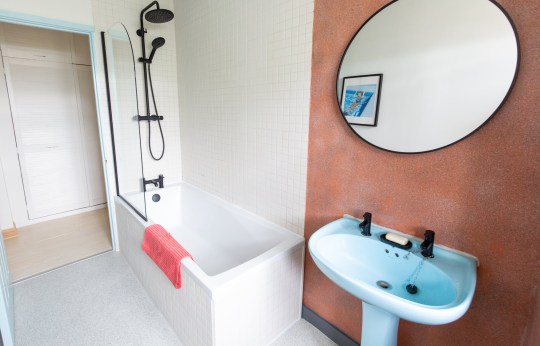 ‘The first thing I did was take the whole house back to basics, removing the skirting boards, and sanding back all the original 19th-century floorboards,’ she says. ‘I painted all the interior walls white, which my friends were really surprised by. They told me I needed to add colour. I told them they needed to wait and see.’

Although the whole house is filled with a vibrant palette of hues, the kitchen is the real showstopper. Stripped of its rotten pine cabinetry and green tiles, it now serves to show off Francesca’s design skills — and is a little piece of Burning Man in Bristol.

‘It’s based on a photograph I took at the festival,’ she explains, ‘and was also inspired by driving through the desert towards it.’

The colour of the floorboards has been matched to the colour of the pale playa dust, and the steel-framed powder-coated kitchen units, in a pinky-orange, to a shipping container in the image.

The simply varnished bare plaster walls represent the mountains, and the blue cornicing and corners of the room are painted in the soaring blue Little Greenes’s Brighton 203) of the Nevada sky.

She also did all her own plumbing — with a few disasters along the way, such as a big leak just after she had finished the tiling.

Although she bought the loo and bath new, she was delighted when she found a sky-blue sink in a skip down the street — colour-matching the shade in the kitchen.

How Francesca did it — room by room 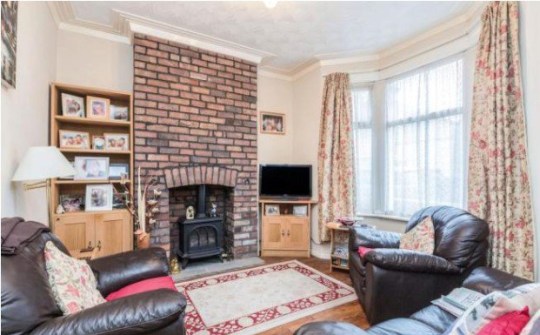 Before: A tired, dated front room 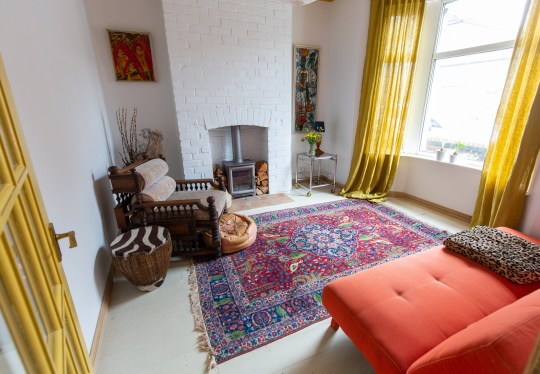 After: Colourful space to relax with quirky vintage details

A bright 1950s rug helps to pick out the colours of two paintings that used to belong to Francesca’s grandmother, while the area around the fireplace has been painted white 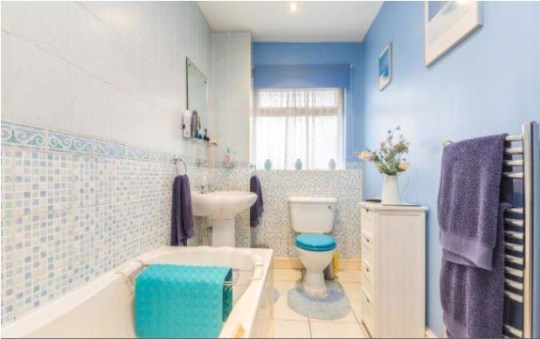 Before: A bog-standard blue bathroom 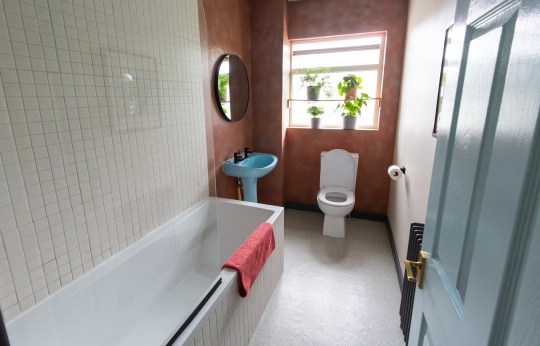 After: A fun but modern bathroom with a funky blue sink

Francesca bought the loo and bath new, but was delighted when she found the sky-blue sink in a skip down the street, colour-matching the shade in the kitchen. 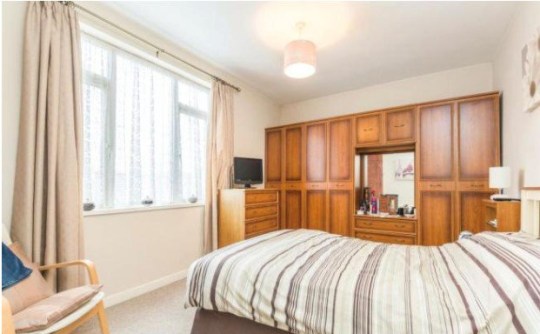 Before: Beige walls and a very brown wardrobe 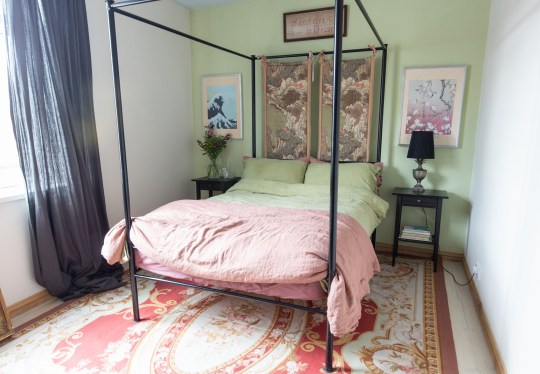 After: A relaxing space with Asian influences

The four-poster bed is a 30-year-old Habitat model, passed on by her mother. The two wall hangings were hand-sewn by Francesca out of vintage Asian fabric. 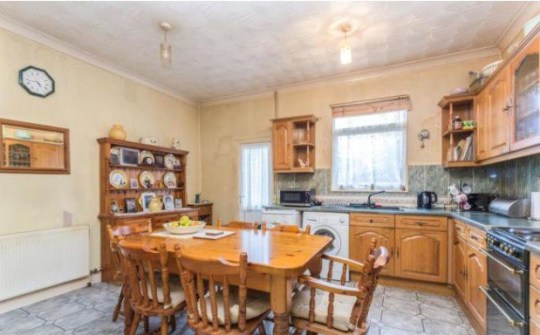 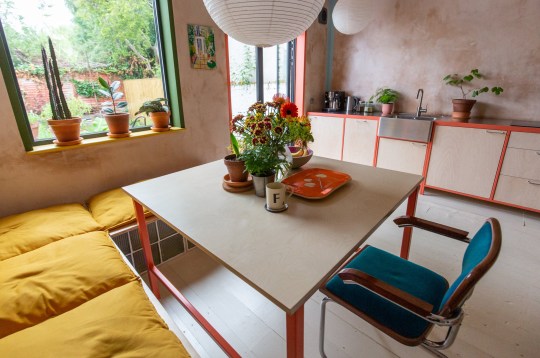 After: A quirky vintage-modern kitchen/diner perfect for entertaining

In fact, there is barely anything in the house that is brand new, with most of it having been upcycled, bought from vintage stores, or handed down through Francesca’s family.

In the kitchen, over her grandmother’s G Plan dresser, hangs her most treasured possession — a stuffed pike, which is a memento of a childhood fishing trip with her father.

In the sitting room, a colourful 1950s rug, bought from salvage specialists retrouvius.com, and a pair of pink-and-yellow upholstered armchairs, found on eBay, pick out the colours of two Indian paintings, also once her grandmother’s. In Francesca’s bedroom, the four-poster bed is a 30-year-old Habitat model, passed on by her mother.

Two wall hangings were hand-sewn by Francesca out of vintage Asian fabric.

Francesca is nearly at the end of her home project, though she still has a couple of big tasks on her to-do list.

She wants to overhaul the garden, while the loft space, too, has potential — although it will be filled with Burning Man costumes until the time comes to get them out again. She hooked up with fellow burners via Zoom, but didn’t join the web festival last month. Hardly surprising. She’s got — very nearly — the real thing in her own kitchen. 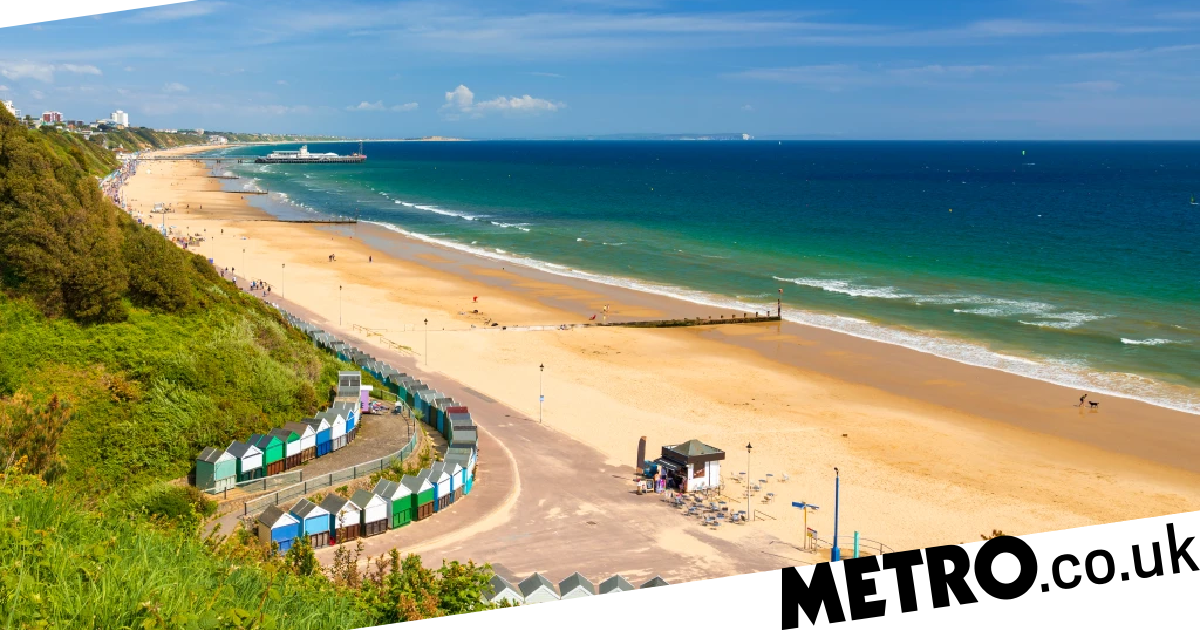 These are the most in-demand coastal towns for homebuyers

In Bournemouth, house prices have risen to £317,449 on average (Picture: Getty)We do like to be beside the seaside. In...

Should you renovate an older property instead of buying a modern home?

The most ‘in demand’ seaside towns for house hunters revealed

Man spends £2,500 transforming his home into a 70s paradise