This 3,120 sq ft home is hidden away in Kensington (Picture: Metro.co.uk/ Daniel Lynch)

When given the chance to design our own family home, most of us would end up erring on the practical side – bedrooms for all, plus a spare for guests or a home office; contemporary bathrooms, with a swathe of poured concrete if we are feeling really bold.

For architect Ian Hogarth and his wife, Claire Farrow, however, there was nothing quite so predictable.

Top of their list came a subterranean disco with illuminated dance floor, a leisure suite with sauna, meditation space and hot tub bath, from which to blast roots reggae, a sunken cinema and internal fishpond.

‘When we were looking to build a family home back in 2010, it had to not only suit Ian and I perfectly, but also our two teenage children and all their friends,’ Claire says of the 3,120sq ft Kensington house, on Russell Garden Mews, a traditional cobbled lane a stroll from Shepherd’s Bush and Holland Park.

‘It was vital it wasn’t a “prissy” house, but one where people could come and go as they pleased,’ she says.

Claire is quick to point out that the basement disco space was actually built for her – ‘I love to dance, and we have had some legendary parties here’ – with a DJ booth that doubles as a utility room. 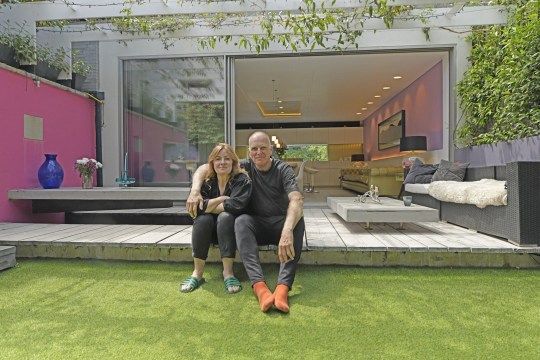 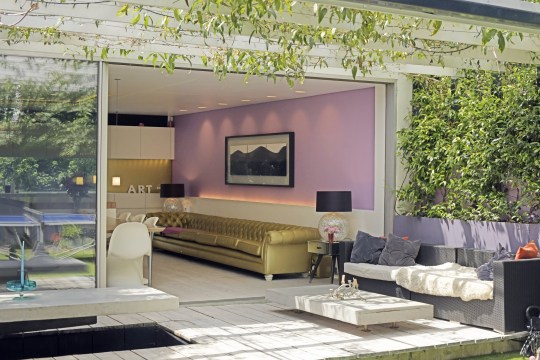 The home was featured on Grand Designs (Picture: Daniel Lynch) 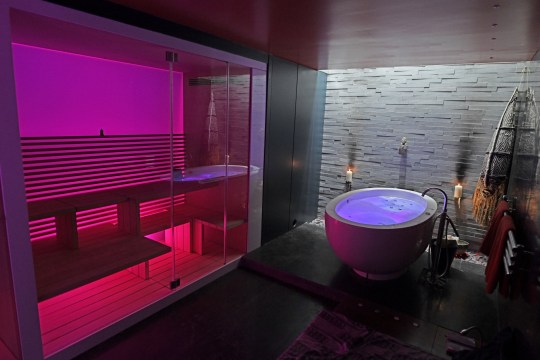 A leisure suite with a hot tub bath was at the top of their must-have list (Picture: Daniel Lynch) 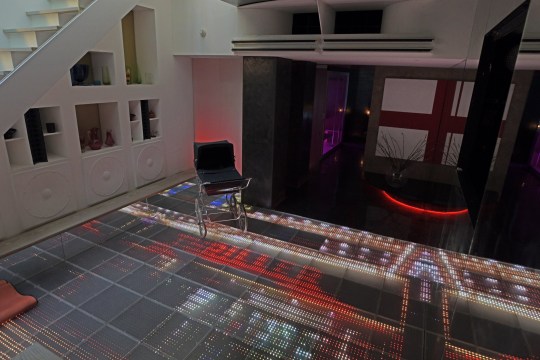 What house doesn’t need a light up dancefloor in the basement? (Picture: Daniel Lynch)

Despite her insistence that it had to be ‘an unprecious, knockabout house’, the design cred is impeccable.

Ian, who now works as a private consultant, has a reputation for edgy, contemporary design twists forged when he was director of the renowned west London-based Hogarth Architects between 2003 and 2019. 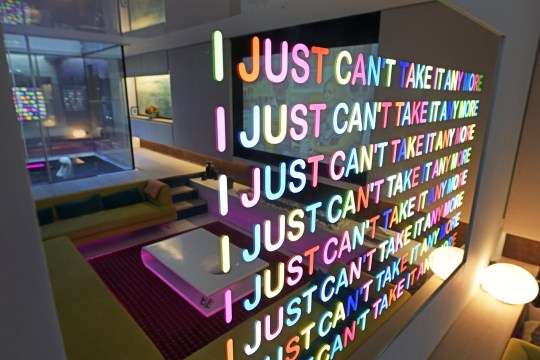 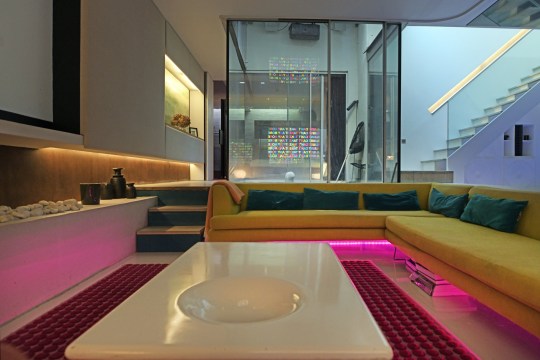 This is the cinema room (Picture: Daniel Lynch) 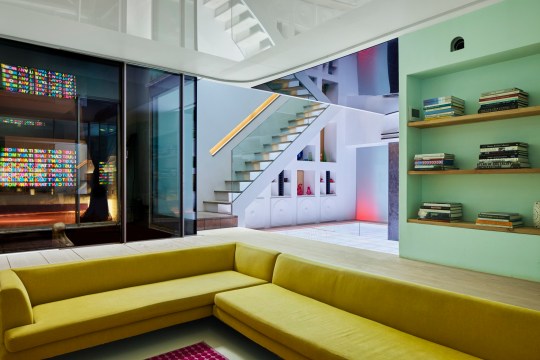 Living in a two-bedroom flat in Earl’s Court with their children, Gil and Tilly (who are now in their twenties), Claire had been fruitlessly hunting for a plot of land on which to build.

‘Surfing the net late one night, in 2009, I simply typed in “land for sale in Kensington”, and, amazingly, a 160 square metre plot came up. I knew we had to pursue it.’

Behind a row of mews houses, the overgrown site (with a price tag of around £360,000) had planning permission in place for an 860sq ft house.

‘I decided to get the best architect I could find, which was Ian, of course,’ says Claire, who works in the British rap scene.

‘And he pretty much quadrupled the space.’ When you are building in a location like Kensington, Ian says, you are always looking to what you can get away with.

‘We did have to make a few alterations to our original designs, and downplay some of the more “modern” parts above ground,’ he says. 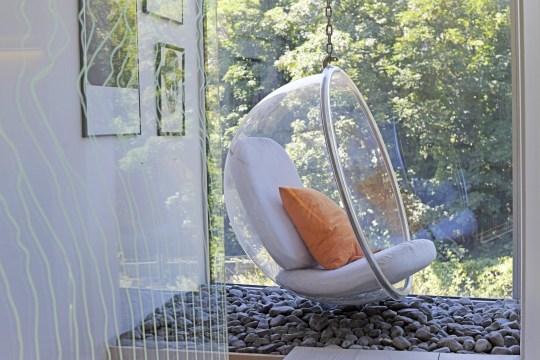 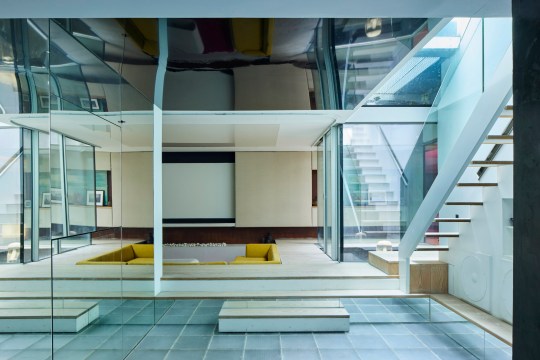 ‘We also managed to buy a 50 square metre sliver of garden from a neighbour, to expand the plot.’

The project – on which Claire and Ian spent a further £1million – made for gripping viewing on Channel 4’s self-build home show Grand Designs, in 2011, as building work was started before planning permission was gained.

His design, Ian explains, is essentially a light and airy warehouse flat at the bottom with a mews house on the top, full of eco features such as solar panels and MVHR ventilation.

And despite 50% of the four-bedder being underground – earning it the moniker ‘The Hidden House’ – there’s no compromise on natural light thanks to Ian’s ingenious use of glazed areas, mirrors, roof lights, reflective paint, and even a periscope in the basement. 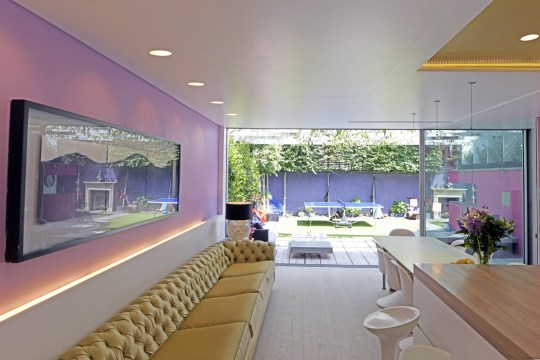 Despite 50% of the four-bedder being underground – earning it the moniker ‘The Hidden House’ – there’s no compromise on natural light (Picture: Daniel Lynch) 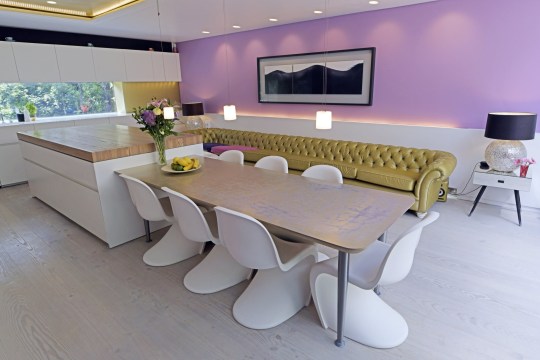 In fact, this sense of practicality melded with fun pervades the entire house, kicking off at the entrance.

Set into a yellow brick façade, covered by a climbing rose, the blue-black mirrored front door is bullet-proof, and without any visible hinges, locks or levers.

‘The door is fingerprint entry, so there’s no need for keys at all,’ Claire says. ‘Great for teenagers who don’t have to remember them!’

Three sets of stairs in the hallway make exploration an adventure – one set leads straight ahead to the open-plan kitchen/diner, and the others to the three bedrooms on the first and second floors, and down to the basement, with its disco space, leisure area and movie room with ethanol fireplace.

Although Claire says she left most of the design decisions to Ian, she did insist on the sliding oak worktop that rolls away to reveal the Foster hob. 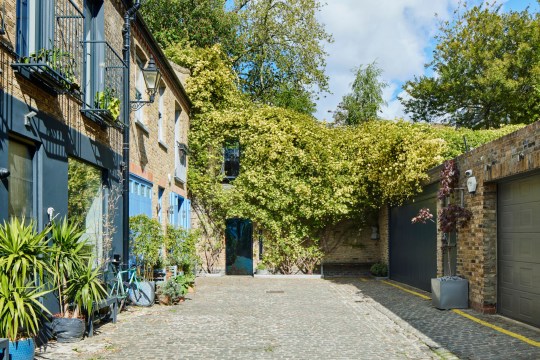 From the front, the house fits in seamlessly to it mews style surroundings 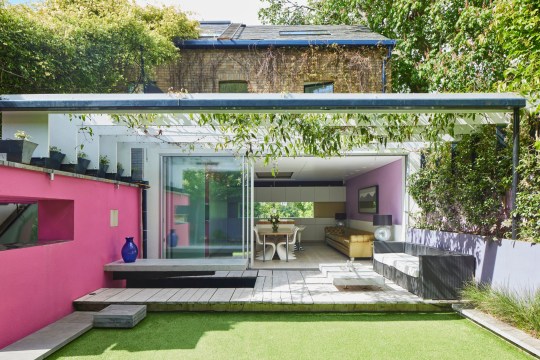 ‘It’s a trick I saw in New York and loved, as I don’t like kitchens that actually look like kitchens: I like everything hidden neatly away.’

The open-plan room, which also incorporates a dining room, has Douglas fir flooring by Dinesen and a full-height sliding window leading to the private garden. Here, you’ll find a sunken seating area beneath a pergola, fire pit and two awnings ensuring it’s an all-weather space.

As you’d imagine, it has been a real party house – in fact, Claire’s soirees were so popular they outgrew the basement, and she set up her own dance night with a few friends.

It has also been used for London architecture tours and as a shoot location, and before the pandemic was part of London’s Open House festival, welcoming around 6,000 guests.

Claire and Ian say the home really came into its own during lockdown, however, with all its flowing, yet distinct inside and outdoor spaces. It was also during this time, Claire says, that she realised it was time to sell up.

‘I had an epiphany and realised I didn’t need all the things I thought I did, that life can be much simpler. I just need my children and a family home.’

The Hidden House is now on the market with The Modern House, for £4m, and Ian is busy finalising his designs to overhaul their next home, a three-bedroom ex-council flat in Notting Hill that was built in the 1980s.

Looking back on their work at The Hidden House, Claire says their greatest triumph is clear. ‘We actually managed to create a house for teenagers that were happy to bring their friends back, and where everyone always felt welcome. It’s been a blast.’