The 1930s property was dated but Naomi has transformed it (Picture: Jam Press)

When Naomi Pierpoint, 36, bought her three-bed semi-detached home back in 2008, it was old and dated.

The initial renovation of the interior cost £13,000 and was carried out in just nine months to make the home liveable for the family.

After the birth of their first child, Ava, in 2011, the growing family added a conservatory to be used as a playroom for £10,000. 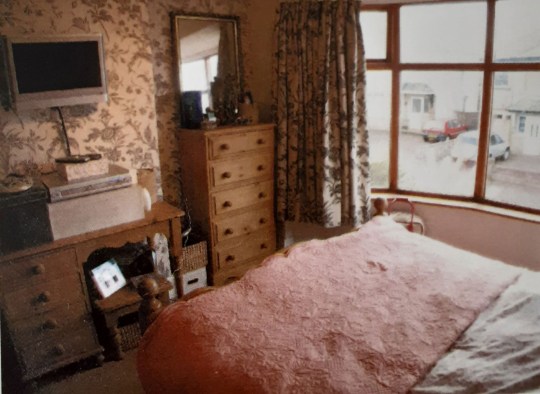 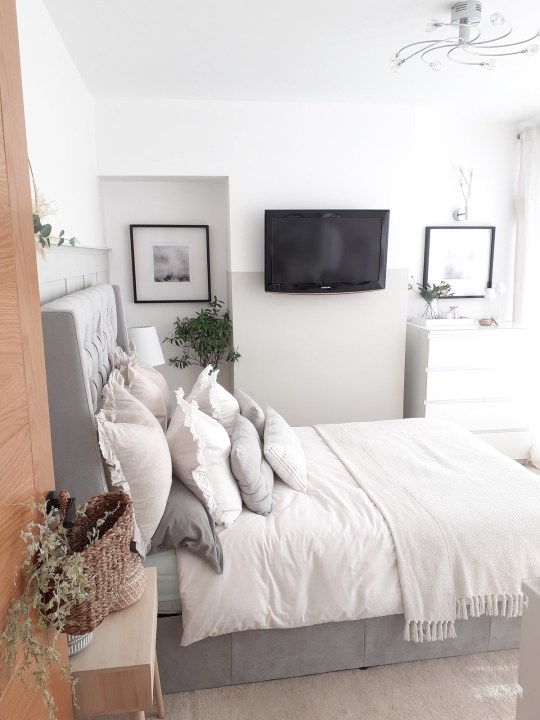 One of the bedrooms after the work (Picture: Jam Press/@home_on_point) 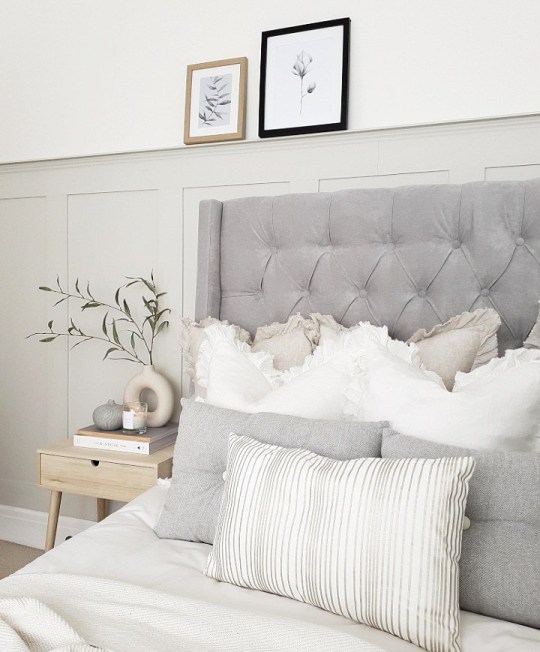 Then in 2019 they added a hip-to-gable loft extension to accommodate their third child, costing around £40,000.

‘We completed most of the work ourselves with help from our friends that are in the trade, this helped to cut the cost, we didn’t mind getting our hands dirty,’ Naomi said.

‘I love to decorate and still do all the painting and decorating myself. I find it therapeutic and also love the challenge of trying my hand at new things and learning new skills.’ 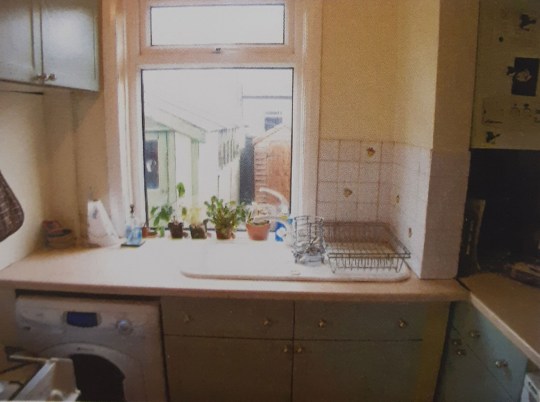 The kitchen before (Picture: Jam Press/@home_on_point) 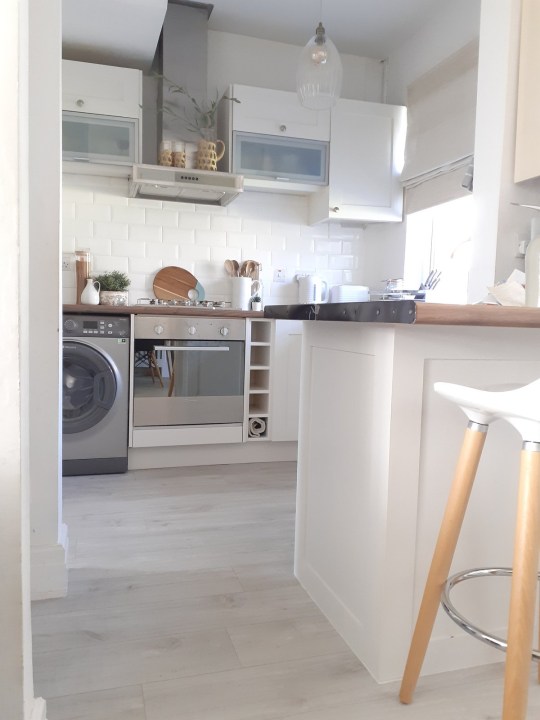 The kitchen after (Picture: Jam Press/@home_on_point) 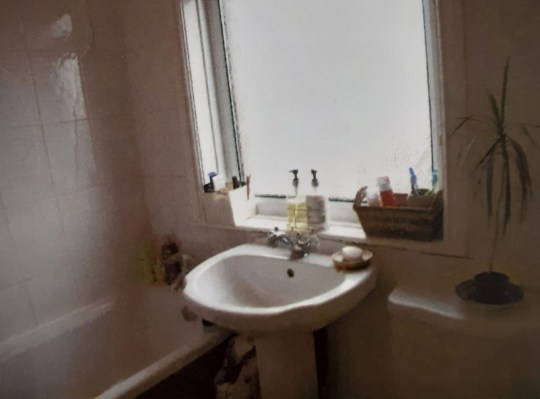 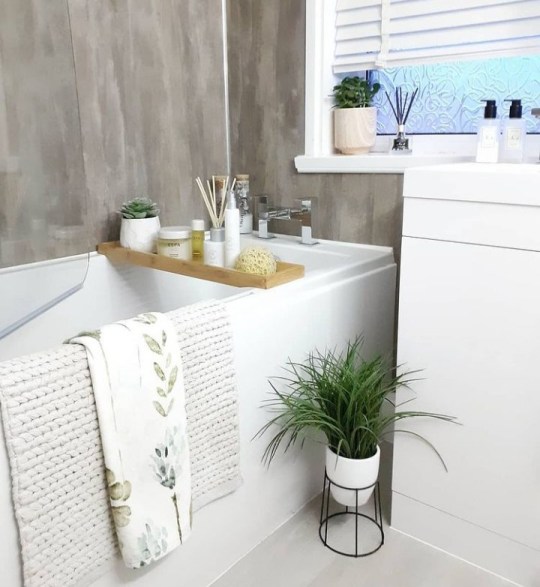 The bathroom after (Picture: Jam Press/@home_on_point)

When they got the keys, they were both living in their childhood homes so quickly got to work converting the downstairs into an open planned living space by knocking down the wall between the dining room and the tiny kitchen.

They also filled in unnecessary interior and exterior doors to create more space for furniture.

They replaced the dated kitchen with one from Homebase costing £3,000 and swapped out the rattling wooden bay windows in the living room and master bedroom for double glazed UPVC windows costing £2,000.

There was an unexpected bump when they realised they needed to rewire the entire house, which cost £3,000. 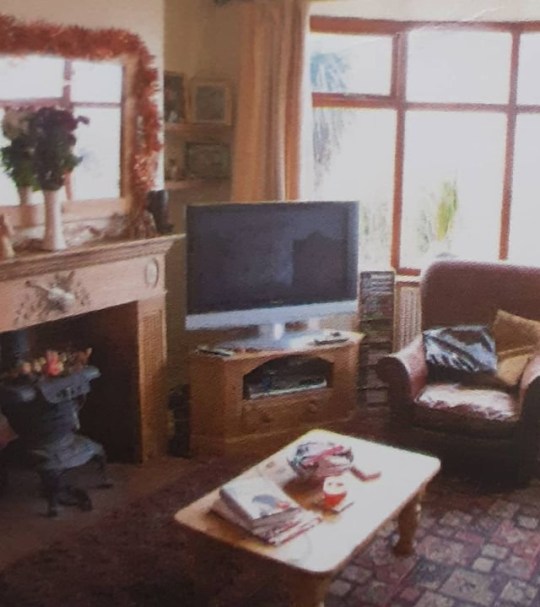 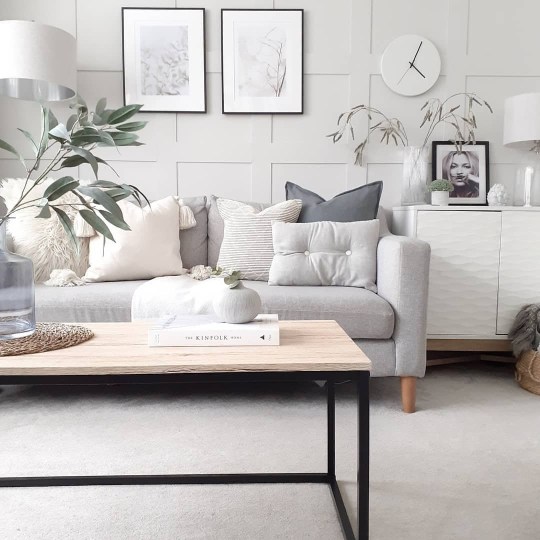 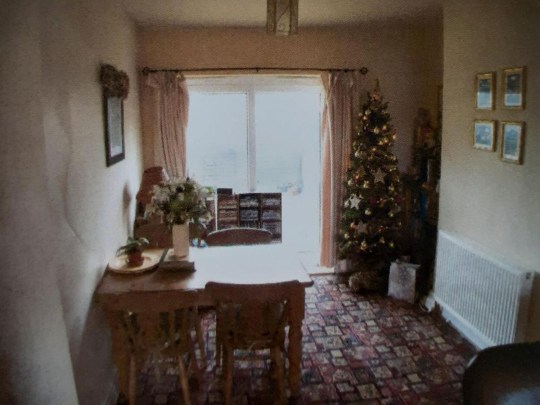 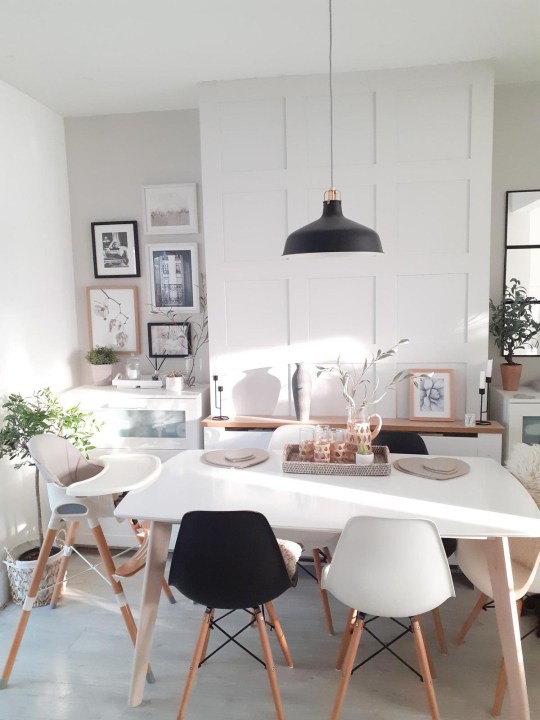 Next, they replaced the ‘very old-fashioned’ carpet downstairs with dark wood laminate flooring from Homebase, costing around £1,500 including fitting.

They paid £600 to have the downstairs walls skimmed to make them smooth for painting but upstairs, Naomi used feature wallpaper to create statement walls in the property’s two largest bedrooms.

She added mirrored and art deco furniture, and converted the smallest bedroom to a walk-in-wardrobe.

She added: ‘In 2016 we decided to finally update the bathroom – we ripped the whole lot out and started fresh with a hot bathroom suite.

‘We found items in sales from separate companies and this helped cut the cost dramatically. 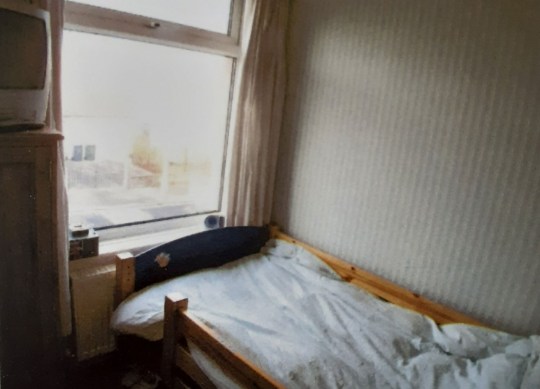 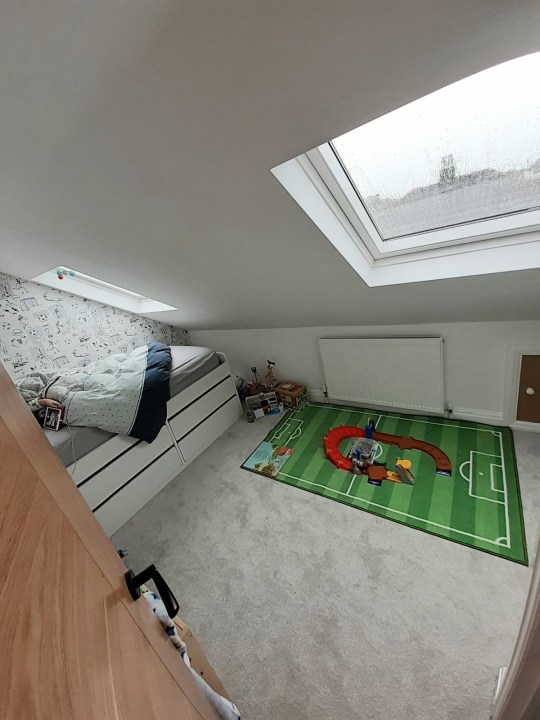 One of the bedrooms in the loft (Picture: Jam Press/@home_on_point) 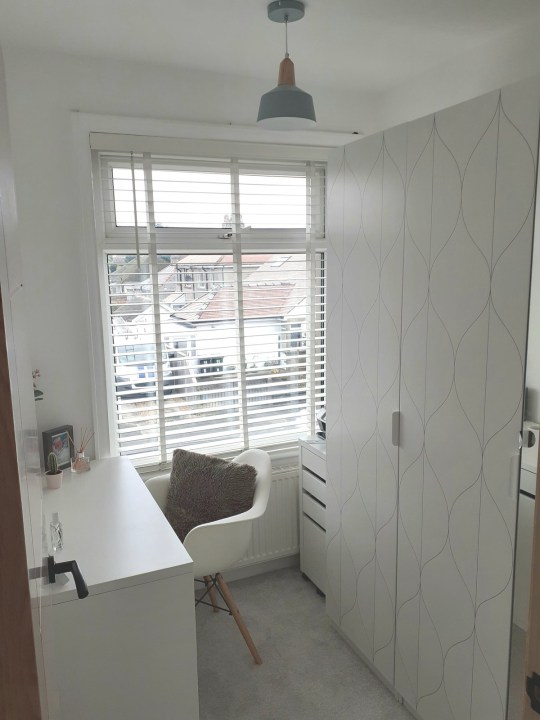 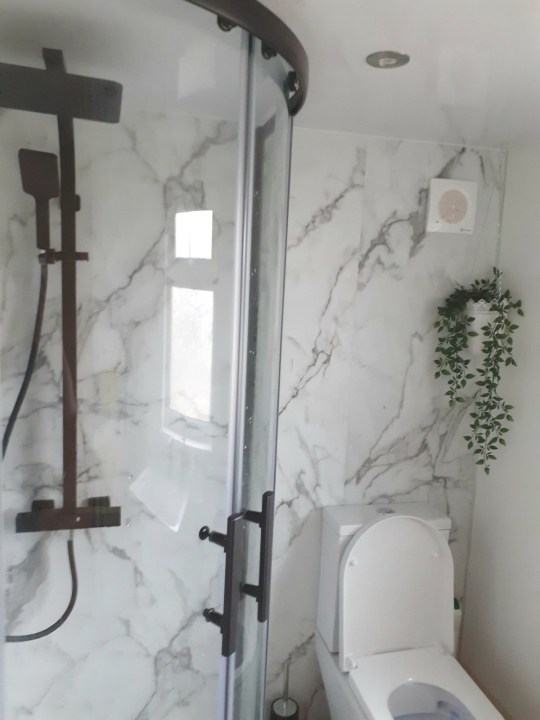 The bathroom in the loft conversion (Picture: Jam Press/@home_on_point)

‘We opted for shower wall panels on three walls as it’s easy to maintain and keep clean instead of tiles. The style was a textured slate effect and I loved the natural look it gave. The cost was around £500.

‘We used a smaller sink unit to gain space and we had the door swapped around to open into the hallway to create more space, the total cost including labour was £2,000.’

After their youngest baby was born, they moved out for two weeks with a newborn while roof was removed and steelwork was installed for the hip-to-gable loft extension. 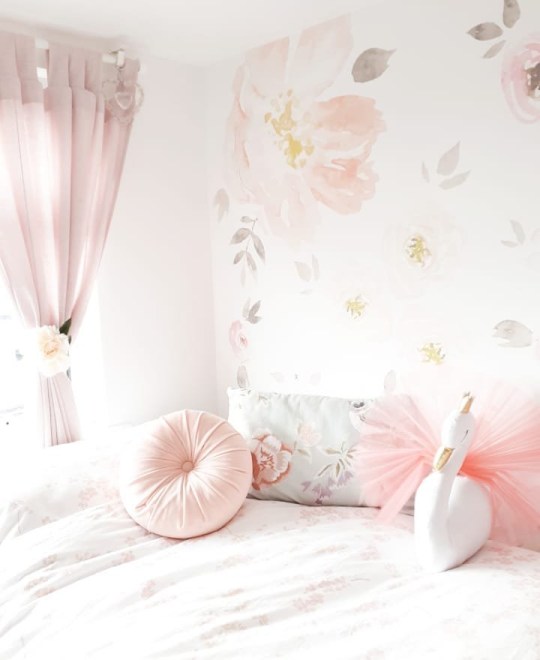 The extension added two bedrooms and a second bathroom which Naomi kitted out with a matt-black shower frame that she snapped up on eBay and a white marble effect shower panel from the Linda Barker range, costing £500.

With such a lengthly renovation project, Naomi has made changes to their original choices along the way too.

They replaced the old flooring throughout the home in favour of a more neutral carpet and grey wood effect quick-step flooring, costing £1,400 and in her bedroom, Naomi added grey MDF panelling behind the bed to create a fake chimney breast, costing just £30.

In her now 13-year-old kitchen, she added MDF panels costing £40 to the cupboards and then painted with Farrow and Ball eggshell paint in Strong White, costing £28.

She also refreshed the blue kitchen tiles with Wilkinson’s tile paint for just £12. 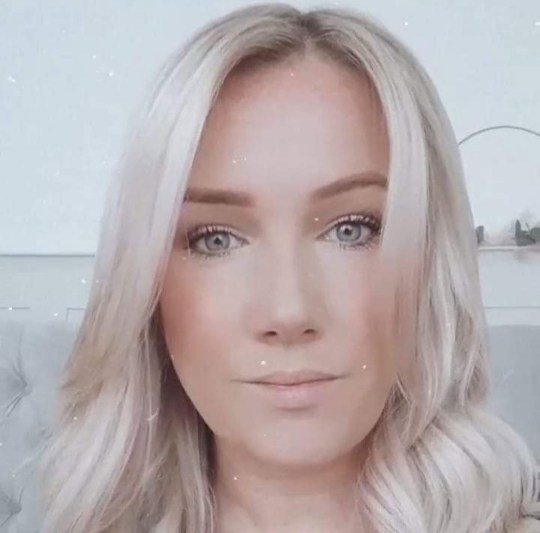 ‘My last project I’ve just finished is upcycling my original kitchen for less than £100,’ Naomi said.

She says doing so much work has allowed them to create a home exactly how they wanted it.

‘I’m so in love with this home and won’t be moving for a long, long time,’ she added.

‘My tips and advice for home renovation are to first get quotes for any major work that needs doing as prices can vary so much.’

Naomi now shares her home interior and decor ideas on her Instagram page, @home_on_point, where she has built a following of 13,000 fans.