Our first-home is a £23k house boat

A COUPLE bought a £23,000 narrowboat to be able to move in together – and they now live mortgage-free while saving for a house.

Gareth O’Sullivan and Nicole Sumner, aged 23 and 25, used five months’ worth of coronavirus lockdown savings to buy their boat in October last year. 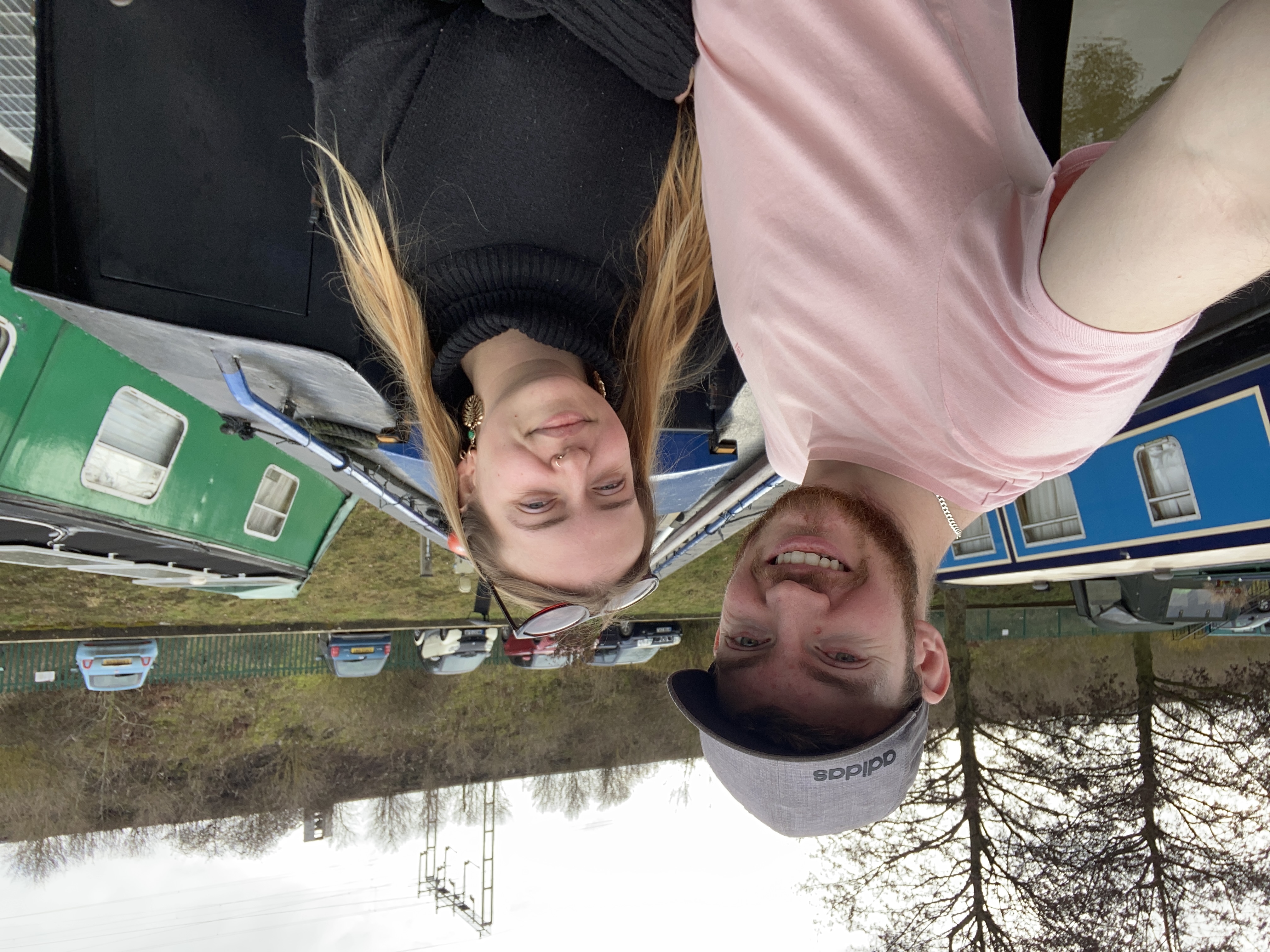 The couple had been living with their parents in separate houses and weren’t able to see each other for almost four months of lockdown and were desperate for a place of their own.

They quickly saved up £5,000 together by ditching takeaways and cutting commuting costs while working from home in Daventry in Northamptonshire.

Gareth, who works in marketing, also ditched his PlayStation subscription service, saving him £60 a year.

Plus, the duo got rid of a campervan they’d done up for previous travel adventures, making an £800 profit in the process.

Keen to move in together but without the full deposit for a house, the couple moved into their boat before the second lockdown in England.

We caught up with Gareth and NHS worker Nicole about life on the water for our My First Home series – and what they’re planning to do next.

The series has been paused for five months due to Covid, but it’s now restarting.

Tell me about your home

It’s a 35ft narrowboat. Some people would say it’s quite a small boat, but it’s a good start in size for us.

It has two entrances, but if you enter at the front, you come into the living area where we got a sofa and TV. 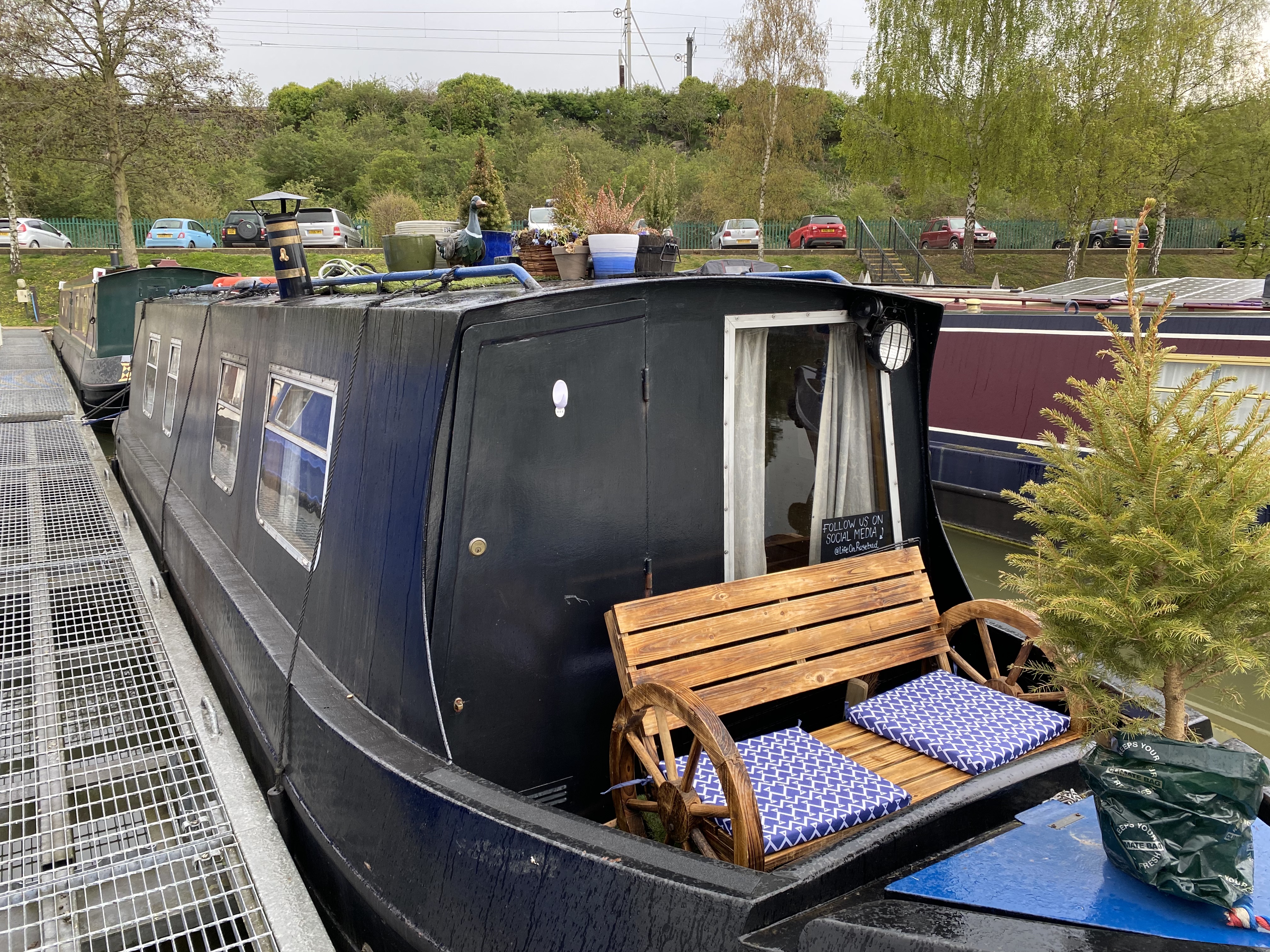 The couple now lives mortgage-free while saving for a houseCredit: Gareth O’Sullivan 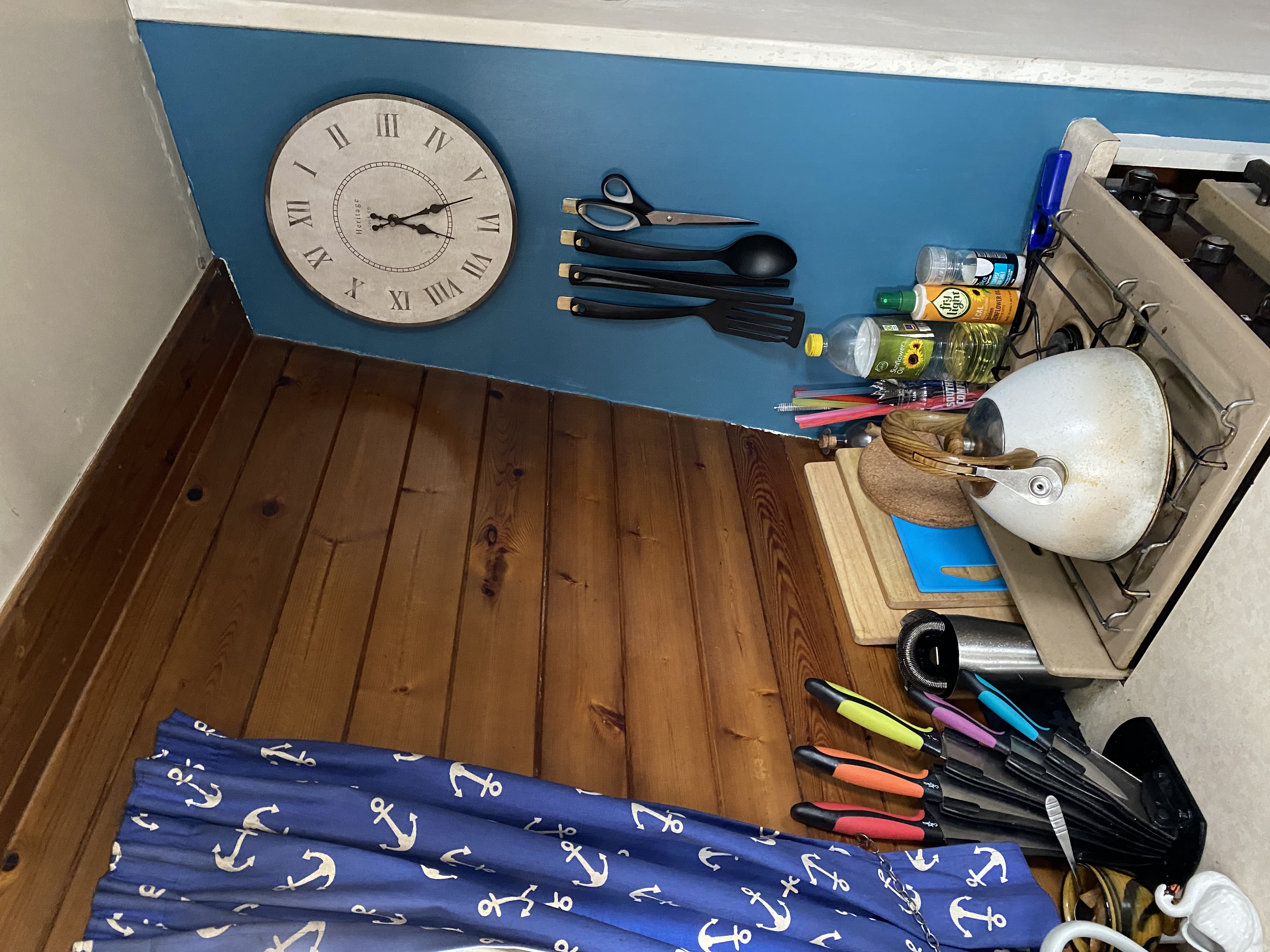 The boat comes with a small kitchen where the duo can cook dinnerCredit: Gareth O’Sullivan

There’s also a multifuel stove, so we can burn wood or coal. And then the kitchen is just to the right hand side of that.

As you proceed down the boat, you’ve got a shower on your right and the bathroom on the left.

We’ve got a portable toilet rather than a built in one, so we have to do the weekly duties of emptying the toilet at the wastage.

Near the shower, we’ve got the bedroom area with a foldable bed, which is a small double.

Why did you buy a boat instead of a flat or house?

We didn’t actually plan to buy a boat originally. We both lived with our parents and wanted to move in together.

We were looking at shared ownership properties and leaseholds, but the cons did outweigh the pros.

I really didn’t want to be stuck in a leasehold, I wanted a freehold house. 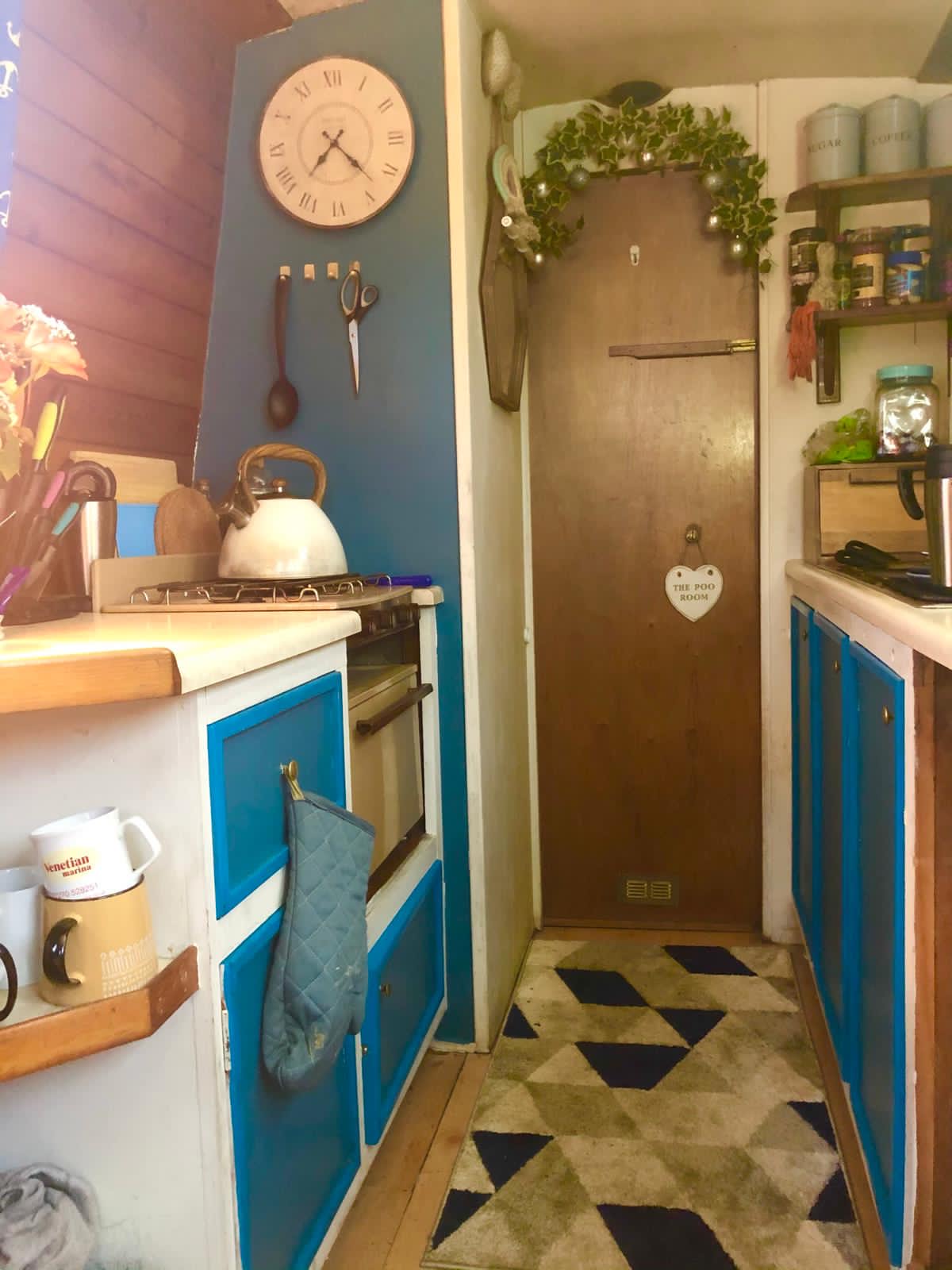 There’s also a multifuel stove, so Gareth and Nicole can burn wood or coalCredit: Gareth O’Sullivan

But I knew that with my deposit to get a freehold, it’d probably take a few more years to build that up.

So I ended up watching videos about narrowboats and my eyes were just glued to the screen.

That’s when I was trying to persuade Nicole to move to a boat because she wasn’t too keen at it first.

Eventually, we were sort of just looking at boats and decided to view a few of them at a marina.

The second one was Rosebud, which is the one we’re on now, and we ended up putting a deposit down for £1,000 on the same day.

Obviously, this meant we could move in together quicker.

We paid £21,950 for the actual boat. Then on top of that we had to pay extra fees, like having additional sockets installed.

We also paid £500 for “blacking”, which prevents the boat from corroding when it’s in the water.

It’s good housekeeping that must be done every four years.

How did you afford to buy the boat?

I looked around on comparison sites to find low interest rates, and managed to get this loan at a 2.9% annual percentage rate (APR) over a five-year term, so that’s brilliant.

I’ve always been pretty good with my money, so as soon as I get paid I try to transfer £500 or more into my savings.

After we came back from a holiday in Mauritius in December 2019, we decided to put some savings away towards a home.

The first coronavirus lockdown helped as I was working from home, meaning I didn’t have to pay anything for travel. 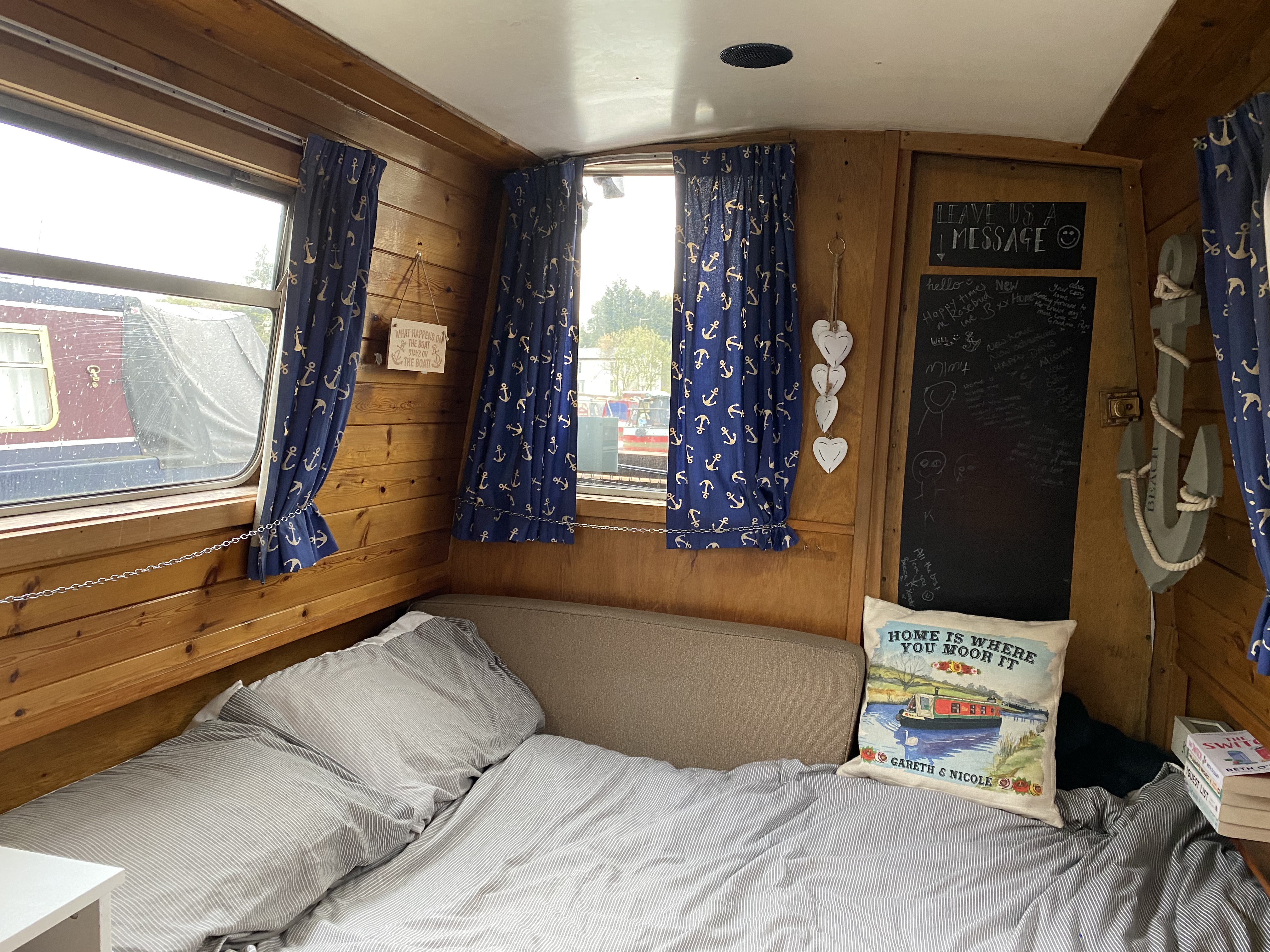 The bedroom area has a foldable bed, which is a small doubleCredit: Gareth O’Sullivan 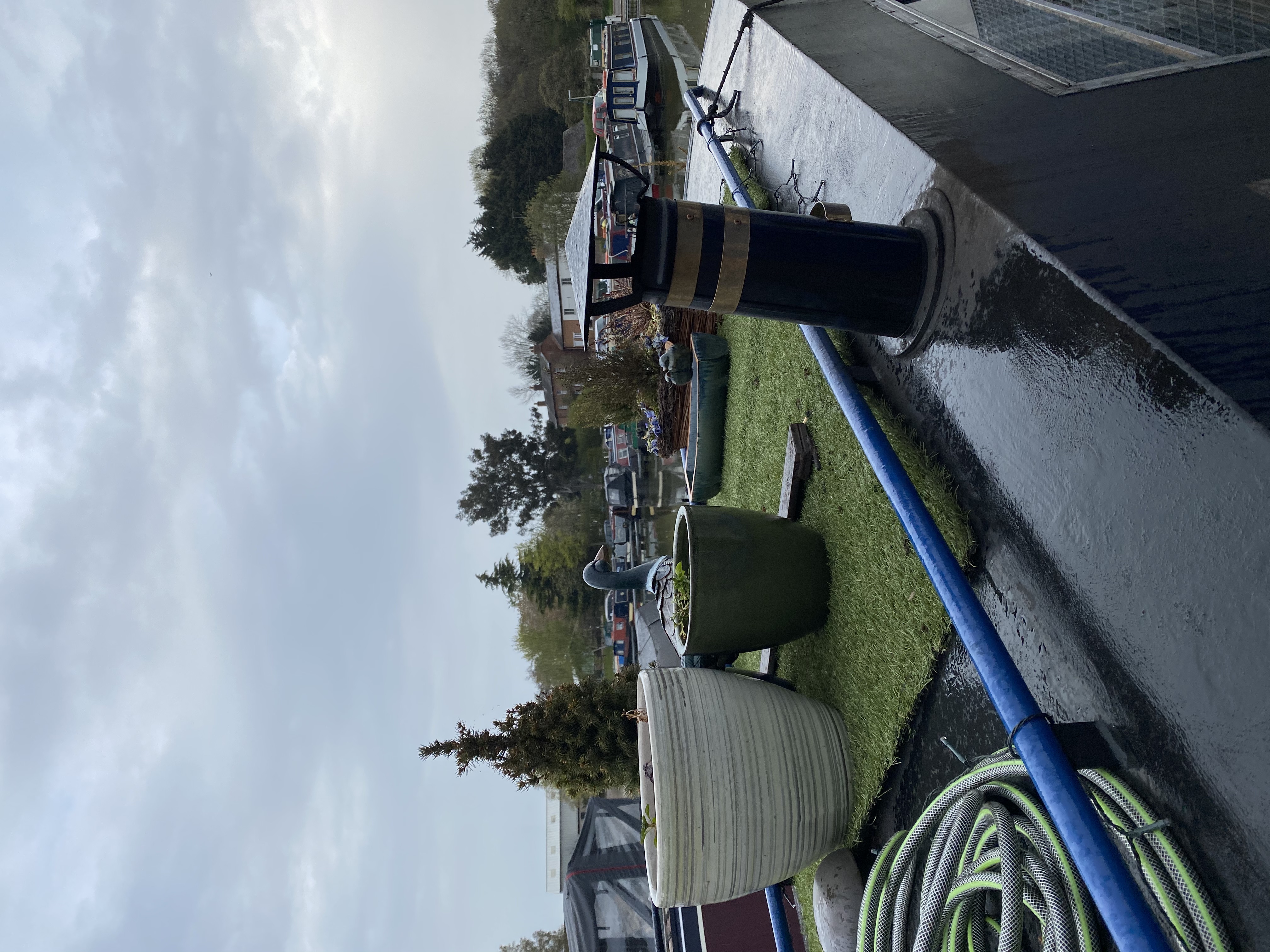 The couple has put some turf and pots on the roof of the boatCredit: Gareth O’Sullivan

The PlayStation service cost £15 for every three months so it’s not much, but it added up.

We were living at home during this time, where I paid £300 a month in rent and Nicole paid around £250.

We also sold a campervan that we’d been travelling with. We bought it for £1,200 and sold it for £2,000 so those savings went straight for the boat.

What are the ongoing costs?

Our monthly repayments for the loan are now £340, so they’re quite minimal.

We’ll probably pay that off in four or five years or so, so the boat is completely ours.

We also pay £310 a month because we’re in the marina full-time – this includes our electricity and water.

Those are the main sort of bills, but then there are the odd ones, like the internet, which we pay £24 a month for and we’ve got a TV licence etc.

Did you have any issues with the purchase?

Yes, once we put the deposit down we were recommended to get a survey done to make sure everything was in working condition.

It took about two weeks for them to come out and do the checks, and once they did, they found seven or eight things that needed work.

The engine didn’t run, the gas wasn’t coming through and the batteries didn’t start either. 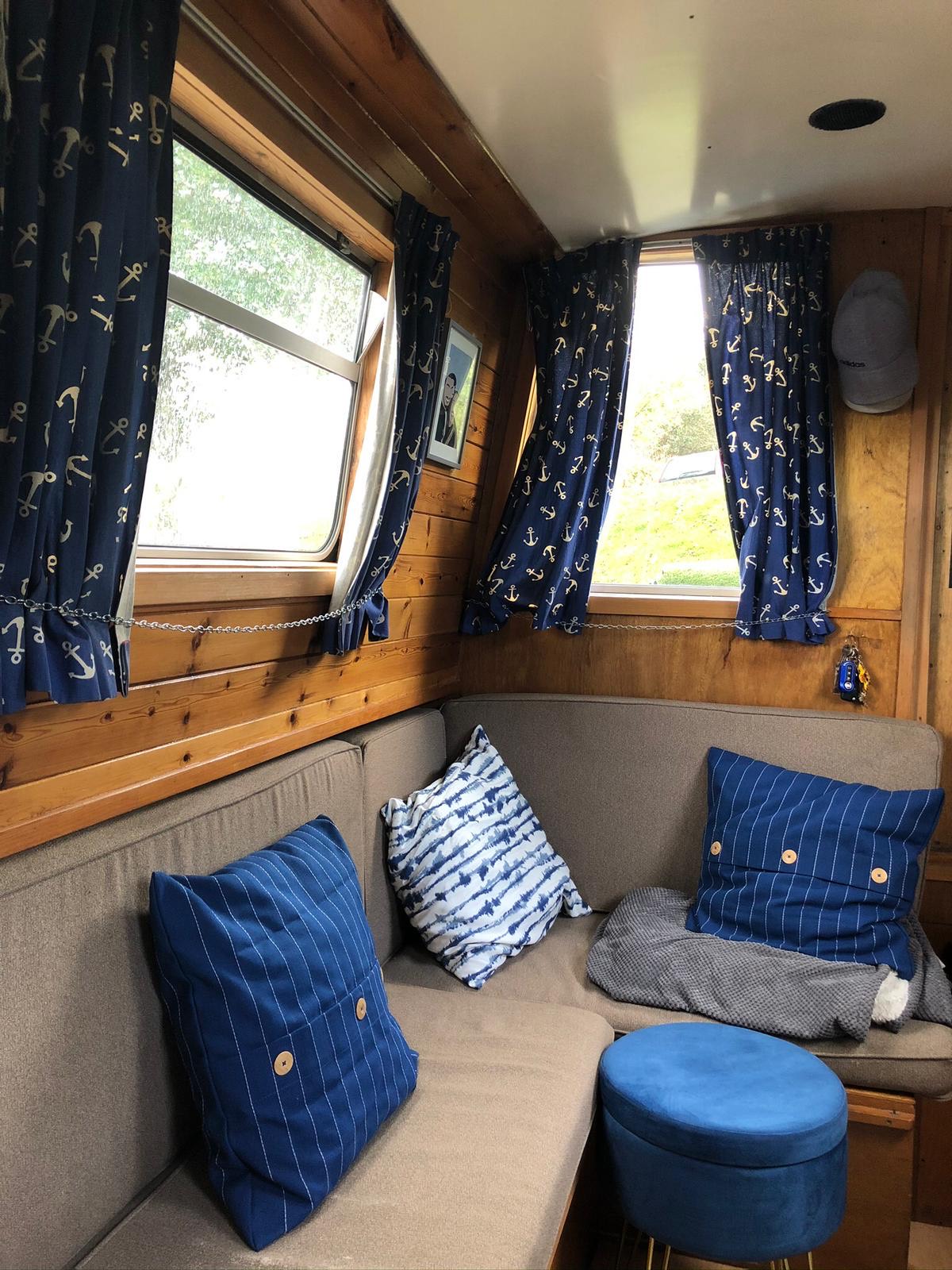 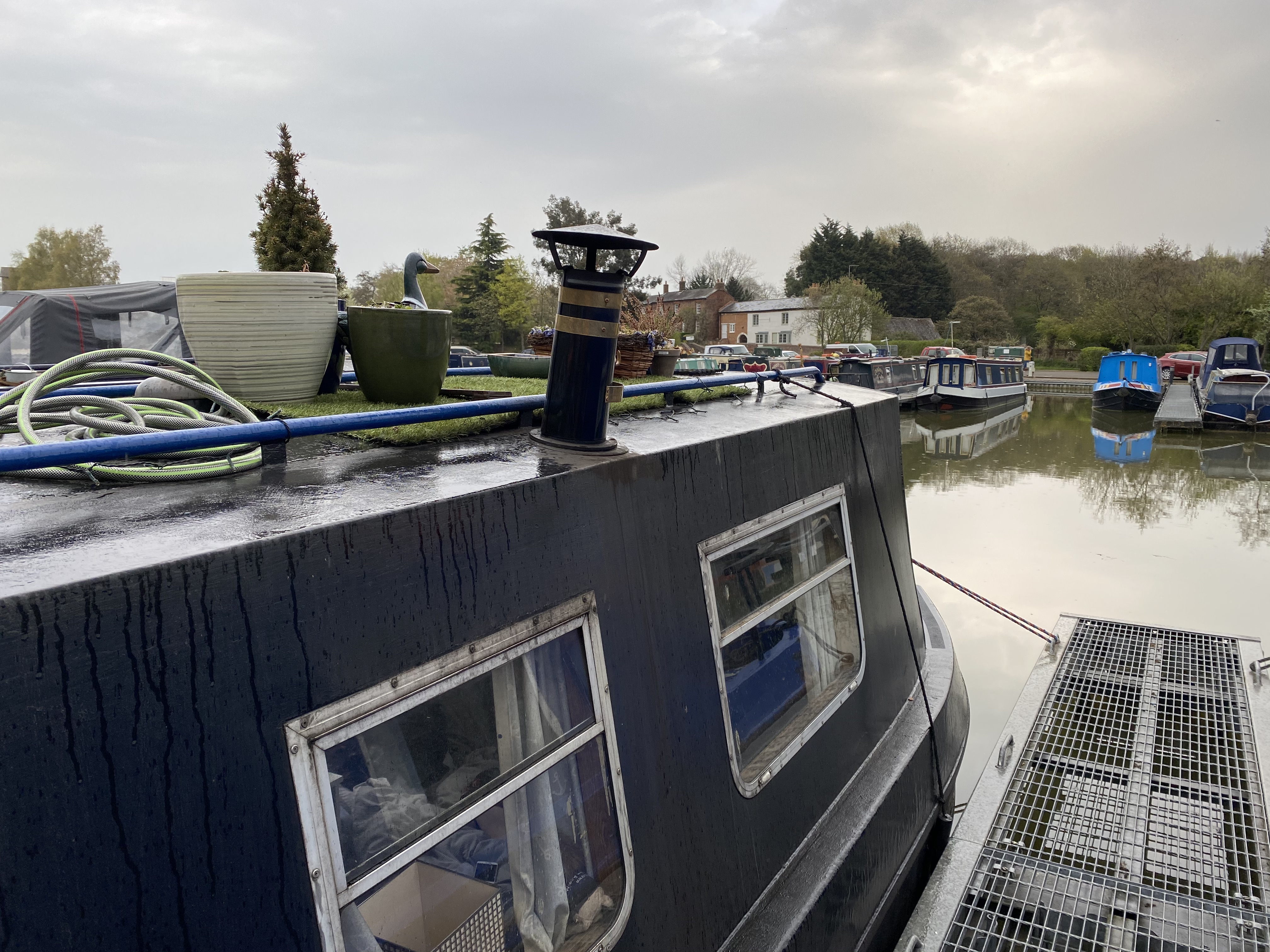 The couple said they love being able to have their own independenceCredit: Gareth O’Sullivan 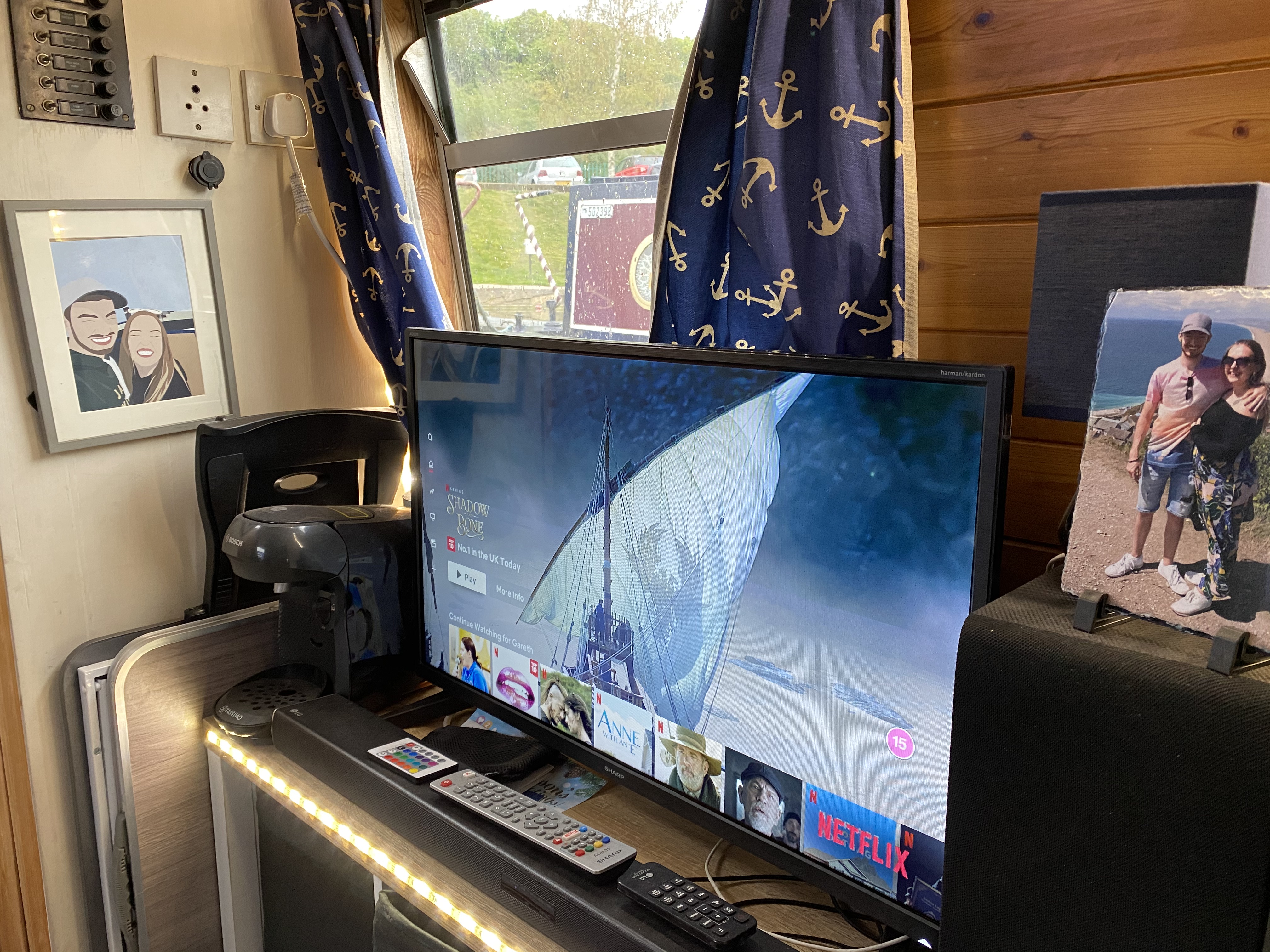 The couple have installed a TV in the boat for lazy days and evenings at homeCredit: Gareth O’Sullivan

There were a lot of things that needed to be done, so the process was a bit longer than we had expected.

We were hoping it was going to be a couple of weeks before we could move in, but it probably took about a month and a half.

Obviously, this is still nothing compared to when you buy a house, so it was quick in a way.

Was it difficult to adjust living on a boat?

When I was at my parents I had a pretty big ensuite bedroom, probably bigger than the size of the boat.

So moving from that to this, it was obviously quite different because it’s a much smaller place.

But I love it and the independence, and being able to have my own space.

Are you planning to stay there for a long time?

The overall plan is to first pay off the boat in five years, meaning we’ll have no monthly costs afterwards apart from internet bills etc.

We want to settle a bit here and then this year start putting some more savings away to eventually have a big enough deposit to buy a house.

Thanks to lockdown, it will probably be a lot quicker to raise a deposit because we love going out and doing things, but it could probably take another year or a year and a half.

We want to get a deposit for a house with three or four bedrooms.

It’s going to feel like a mansion when we move out, if we decide to leave the boat.

The couple are sharing their first-time buyer journey on their YouTube channel Life on Rosebud.

Meanwhile, one family of five bought £3,55 four-bed first home with money from car boot sales and getting rid of a motor.

Plus, a single dad bought a £175,000 two-bed first home by working seven days a week and selling clutter on Facebook.