TIS’ the season to eat turkey and stuffing sandwiches for lunch as high street chains reveal their Christmas menus for 2021.

The John Lewis advert, the Coca-Cola lorry and festive menus in sandwich shops are all tell-tale signs that the big day is approaching.

The US coffee giant has got some brand new items for 2021 with some wacky sounding options – chocolate orange marshmallow toastie, anyone?

Unfortunately the dessert toastie doesn’t appear in shops until next week so I couldn’t get my hands on it.

Instead I tried a selection of Starbucks‘ new Christmas offerings which hit the shelves yesterday – and there were some hits but also some misses.

I loved the blue cheese and chutney toastie and the toffee nut latte cupcake I tried.

But I was less than impressed with its new vegan Christmas sandwich.

I rated the products on value for money, appearance, taste, and how festive they were.

All of the products, except the chocolate orange toastie, are available in stores now and you can also get them delivered.

We’ve listed the prices but this will change depending on your location, you can find your nearest Starbucks store here. 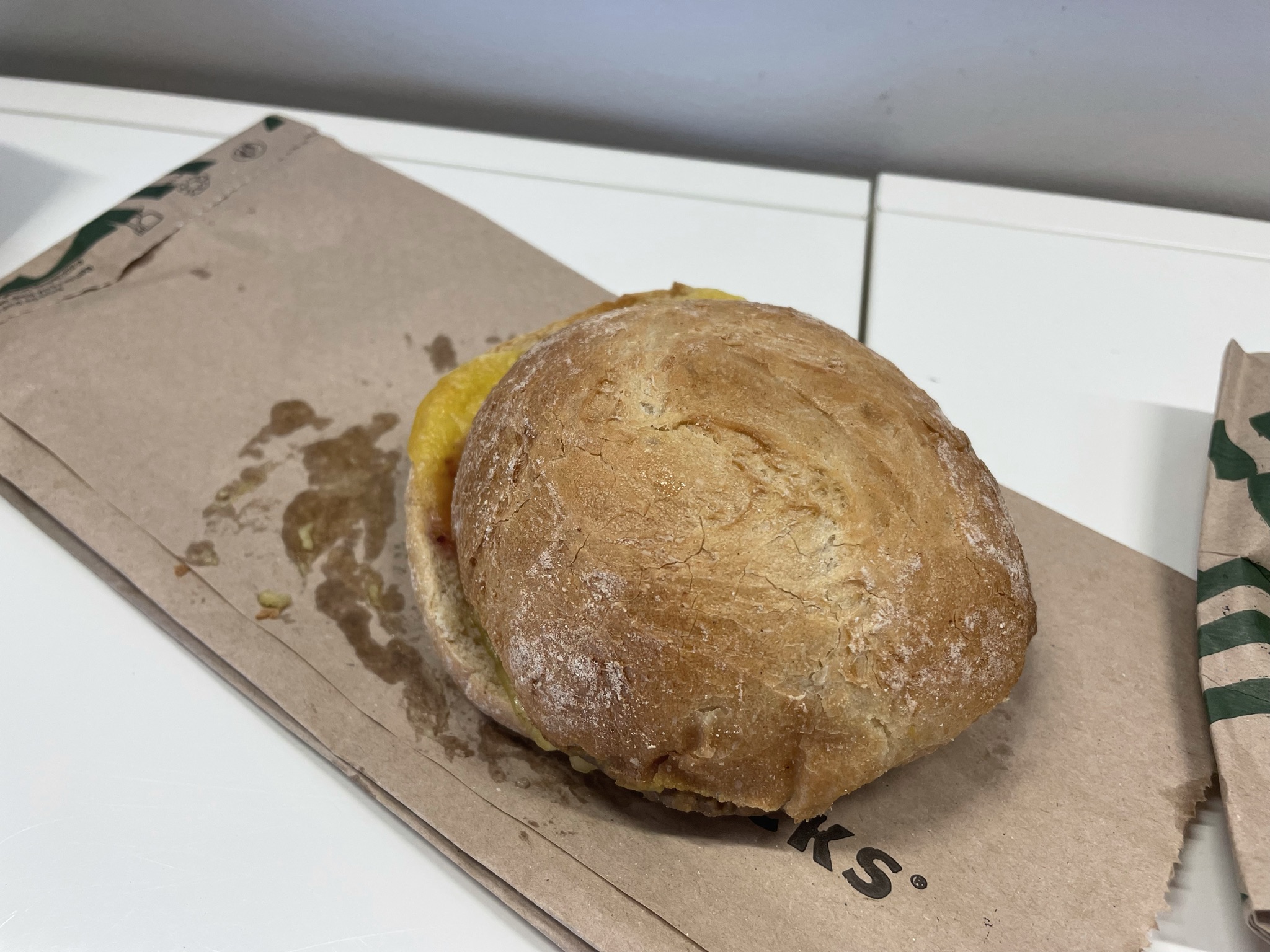 I wasn’t impressed by this new vegan option

I tried the Very Merry Beyond Meat Sandwich to start with, which is Starbucks’ new vegan option.

It didn’t look pretty when I took it out of the wrapper – it was wonky and the patty looked a bit insipid.

So first impressions weren’t great, and it really was downhill from there.

I  wasn’t keen on this on the first bite – the flavours were all over the place and the cranberry, cheese and mustard mayo just clashed.

It was a bit confusing and I wasn’t sure if I was eating a Christmas sandwich or a greasy burger.

I’m not a vegan but I’m always keen to try new plant-based products to cut back on meat so this was a bit of a disappointment. 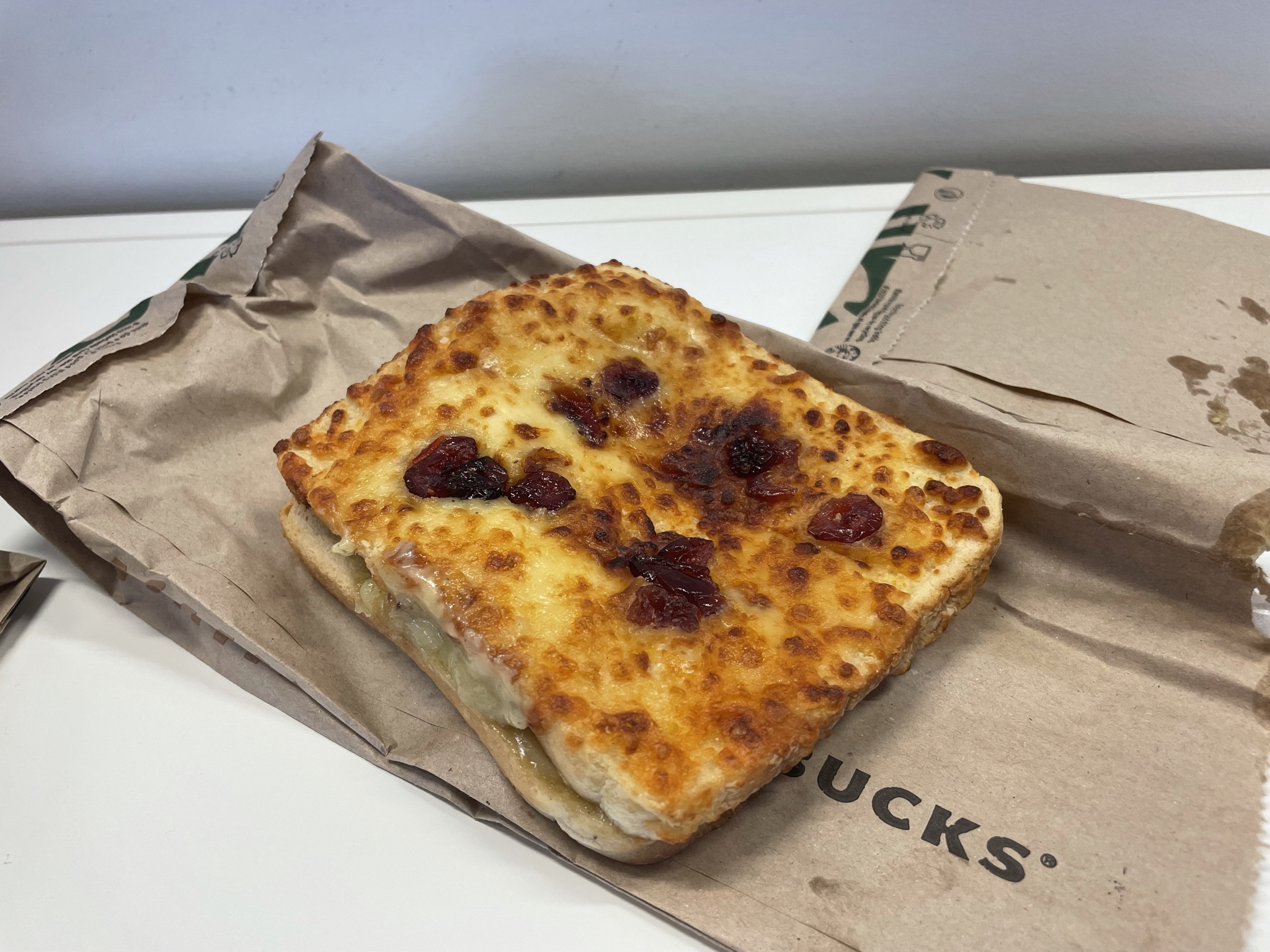 Next up was the blue cheese and chutney toastie.

Thankfully I really liked this one, you can really taste the blue cheese coming through, which goes really well with the apple chutney.

It tastes quite luxurious because of all the cheese – it’s got mozzarella, cheddar and emmental in there too – which is just what you want for a Christmas treat.

Prices start at £2.99 and I don’t think you can really argue with that for lunch on the go. 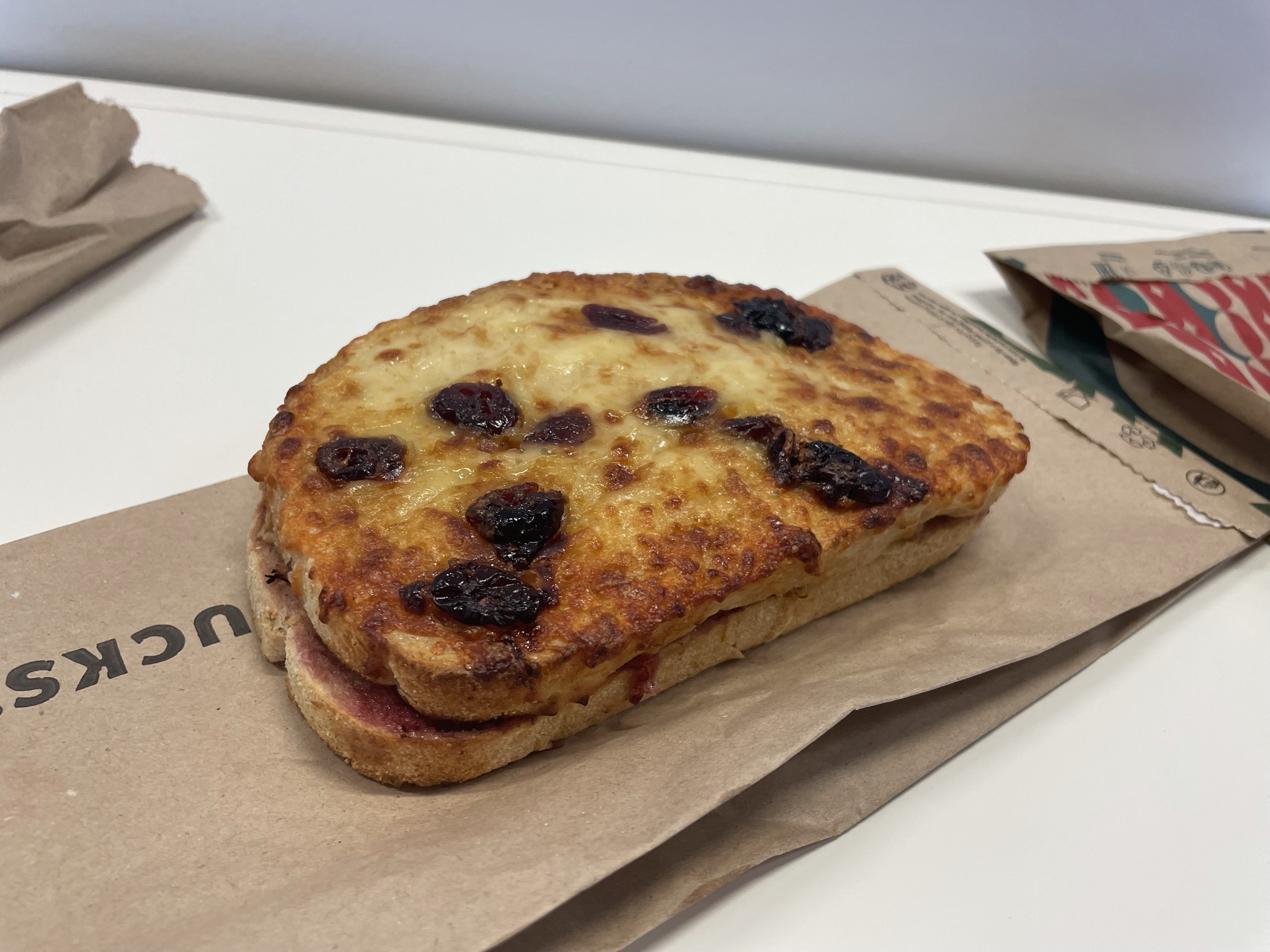 This toastie has got loads of festive flavour

Starbucks has added another new toastie to its festive menu for 2021.

A Toastie to be Thankful for includes shredded ham hock, sliced turkey and a sprout, potato, cabbage and leek hash in sourdough bread.

It’s also got béchamel sauce, mozzarella, cheddar and cranberries dotted on the top.

I thought this had a decent amount of filling and all the right festive flavours, and I liked the addition of the cheese with the traditional Christmas dinner theme.

After a few bites I thought the cranberry was a bit overpowering, making the whole thing too sweet.

But if you love cranberry sauce you’ll probably rate this highly.

It’s more expensive than the blue cheese one, and not as nice in my opinion, so I’d opt for the other one if I was popping into Starbucks for lunch. 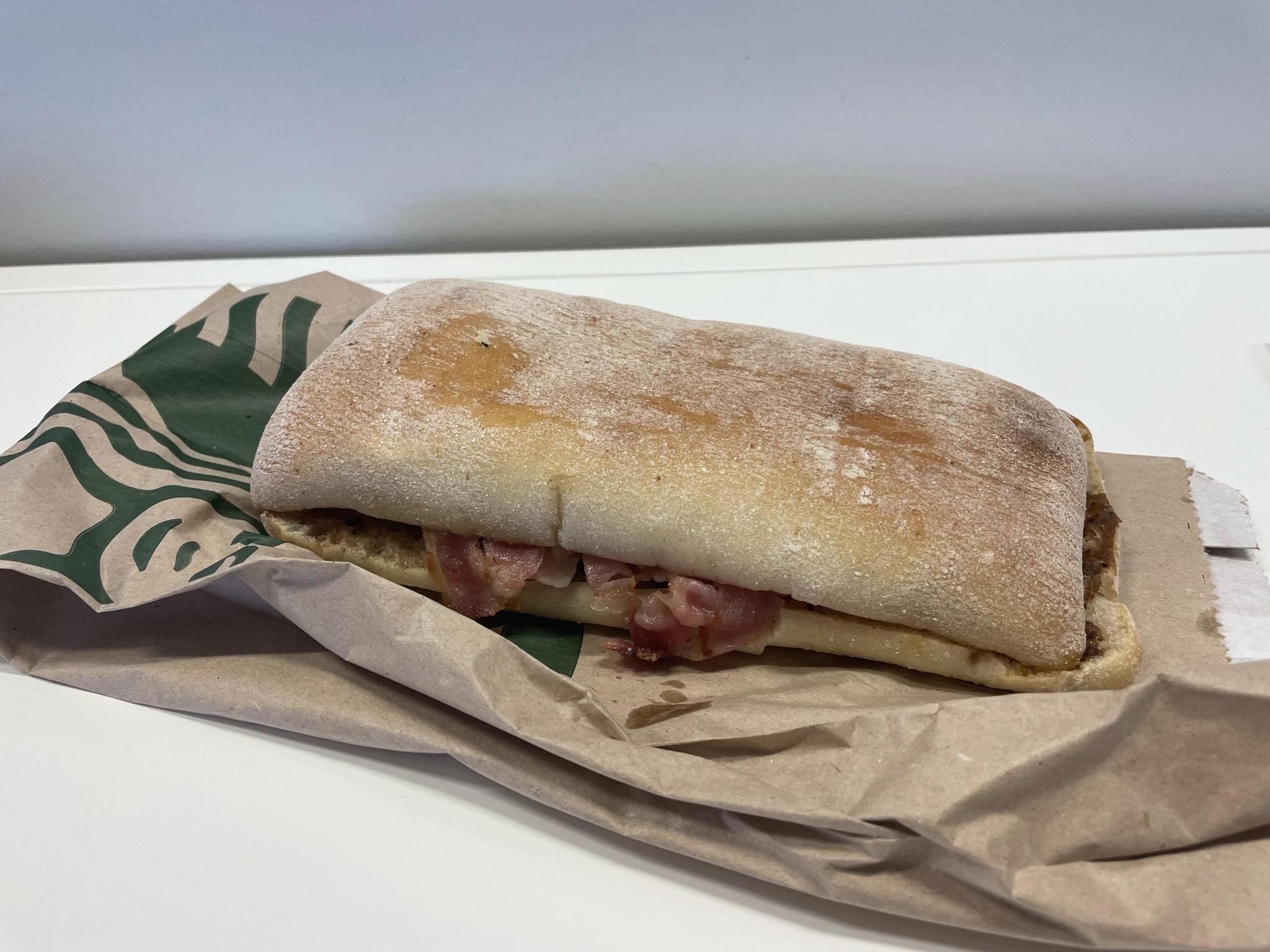 All the other items I tried have been new this year but the festive feast panini is back from 2020.

It tasted good but the cheese and bacon dominated, so it wasn’t all that different from a ham and cheese panini.

Those taste great, but you can pick them up from any high street coffee shop on any day of the year.

It didn’t have enough Christmas sparkle for me, but the stuffing was a nice extra touch.

It didn’t look that special when I unwrapped it, but in fairness I’m not sure if you can make a panini look special so I might have to forgive Starbucks on that one. 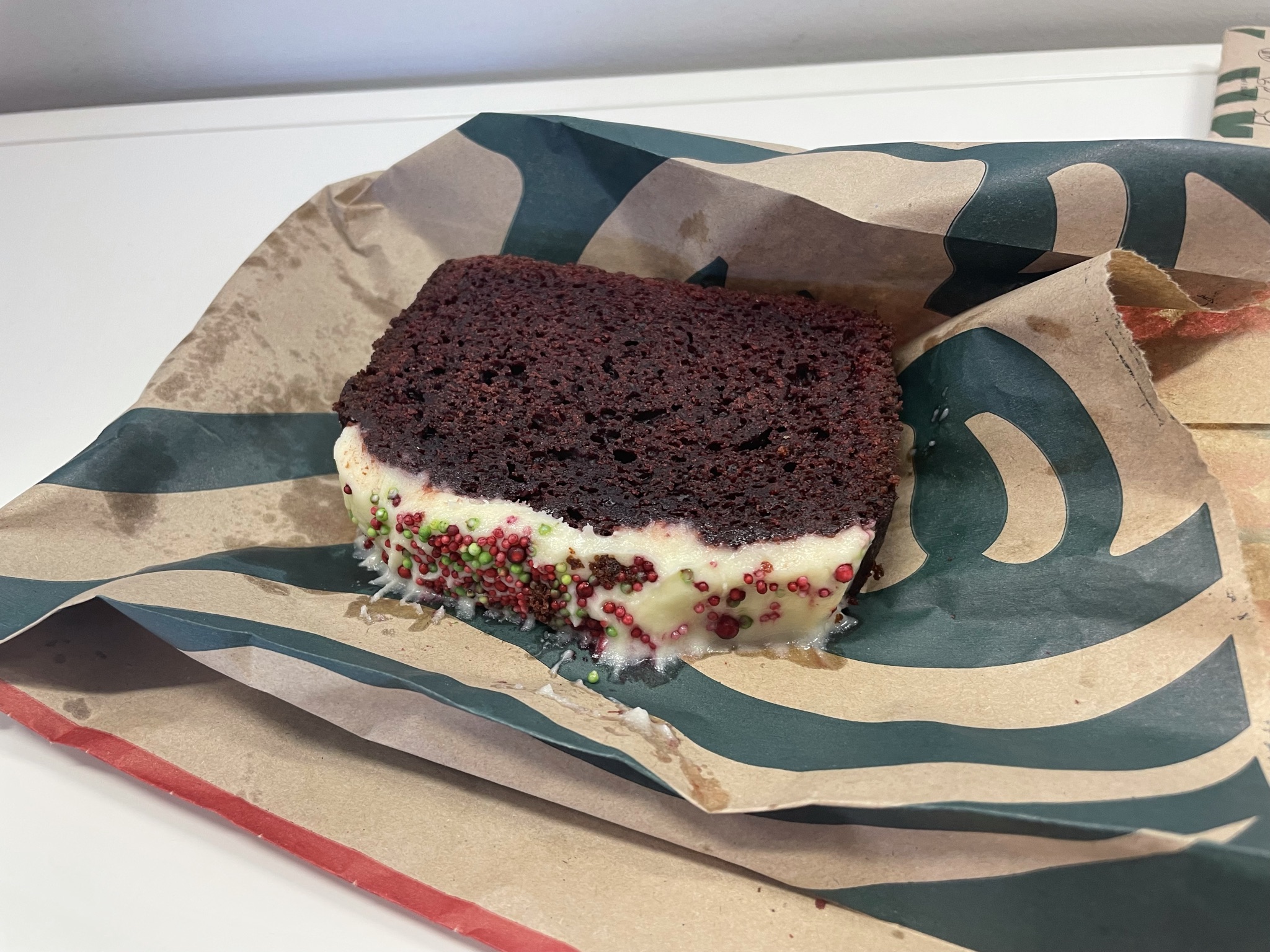 The red velvet loaf cake was a success in my opinion

It just looks festive without having to try, because of its dark red colour with a layer of snow-like white icing topped off with sprinkles.

The loaf cake was creamy and stayed nice and moist, but the texture was quite dense.

It was also a big slab of cake, meaning you’re getting good value for money.

Overall I think Starbucks fans with a sweet tooth will be happy with this Christmas addition. 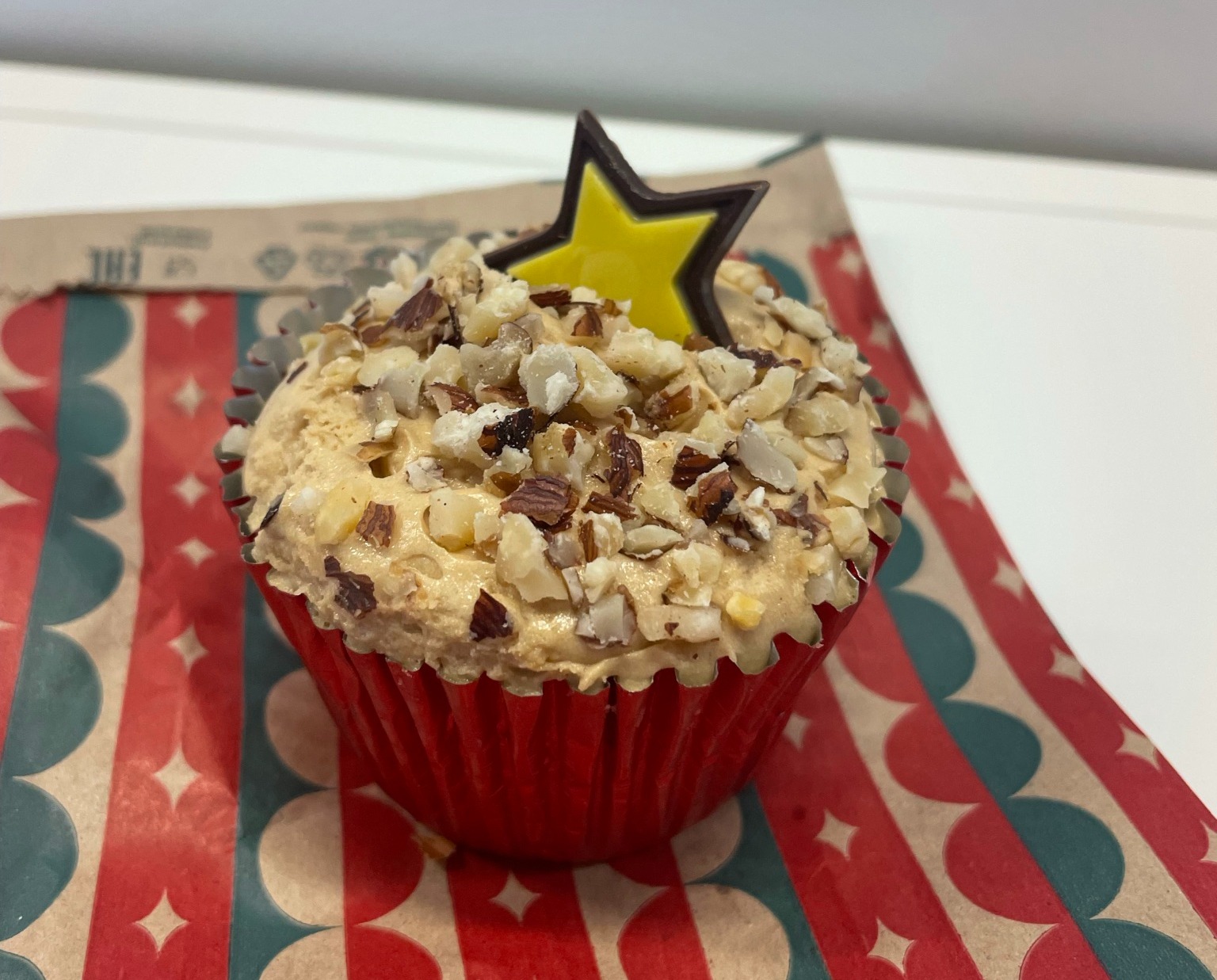 The winner! The toffee nut latte cupcake was the best thing on the menu

For someone who claims not to have a sweet tooth, I was a big fan of the toffee nut latte cupcake.

The sponge is soft and springy and you get a huge dollop of coffee flavoured icing on the top.

Sometimes too much icing can ruin a cake, but this one’s got a great flavour and it’s light and airy so it doesn’t overpower everything.

Starbucks have decorated it really nicely, with a festive star and nuts sprinkled on top for texture that definitely bring the Christmas spirit.

It would definitely go down nicely with a Christmassy coffee, I’d buy this one again.

Costa launched its Christmas menu last month and it features a pigs in blankets panini.

You can get peri-peri gravy at Nando’s this year and Caffe Nero’s festive treats include chouxnuts and a gingerbread latte.

In her new documentary, Evan Rachel Wood continues to detail the abuse she allegedly faced throughout her relationship with ex-fiancé...