IF you’re looking to stock up the freezer, you’ll want to know which supermarkets are offering the best bargains.

Food prices are soaring because of rocketing inflation – which now stands at an eye-watering 10.1%.

It means that you’ll need more money to get the groceries in, as experts predict shoppers will have to fork out £533 more to fill the fridge.

You can save money on freezer staples like pizza and chips by buy figuring out which supermarket sells them for less.

That’s why we looked at a range of supermarkets including  Aldi, Lidl, Tesco, Sainsbury’s to compare prices of the 10 most popular freezer items. 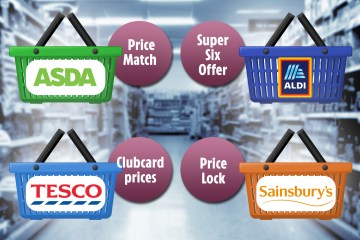 We used price comparison website Trolley to check out prices.

Here’s which supermarkets to head to for your bargains.

Frozen pizzas are a quick and easy dinner to whip up for the family.

All of them sell cheese and tomato pizzas at this price, but if you’re a meat eater, head to Asda and Aldi for pepperoni pizzas which cost the same.

The Sun’s Lynsey Hope was a fan of Lidl’s pizza when she put frozen pizzas to the test.

She said she could barely tell the difference between Lidl’s pizza and the Goodfellas equivalent – which is £1.49 more expensive.

Shoppers have been stunned by rising fish finger prices.

One Sainsbury’s shopper said they nearly “fell to my knees” after seeing the price of a box of 30 fingers, for £7

Price of fish is going up partly because around 40% of our white fish comes from Russia – and it is now subject to a 35% tariff increase as a response to the war in Ukraine.

Head to Asda, where you can get a pack of 10 for 69p under its Just Essentials range.

Morrisons is selling boxes of 10 for 79p, and you’ll be paying 80p at Sainsbury’s and Tesco.

Recreate a Friday night supper from the chippy for less by buying some oven chips from the supermarket.

You can buy a bag of French Fries from Aldi for 89p – which was the cheapest bag we could find.

Tesco and Sainsbury’s sell packets of chips for 99p – the next cheapest we could find.

Splash out 1p more though and head to Waitrose for bags that cost £1 – Lynsey gave them top marks in her oven chips taste test.

Chicken nuggets are a family favourite – but which shop sells them for less?

Next best value for money was Aldi’s 450g packs of Rooster nuggets which works out at £1.39.

But Sun reporter Alice Grahns ranked Marks & Spencer’s nuggets the best – but they come out much pricier at £3.50.

She said they were “tender” and “nice and crispy”.

If you’re planning on whipping up a feast this weekend but you’re on a budget, head to Sainsbury’s where you’ll get 15 for 48p.

While Asda and Tesco are selling them for 50p.

But Sun reporter Jess Clark thought Morrisons’ packs for 85p were the best when she put supermarket own-brand puds to the test.

She thought they were “delicious”.

While the weather is still warm, you’ll want some ice cream in the freezer.

Aldi is selling four chocolate and hazelnut cones for 95p – working out 22p per cone.

But when The Sun’s Laura Stott put cones from supermarkets to the test, she loved Lidl’s strawberry and vanilla Bon Gelati cones.

She said they were gooey and had “plenty of sauce”.

There’s still time to fire up the BBQ this summer.

No feast is complete without burgers, but who sells packs for less?

Tesco is selling packs for the same price, which but you only get four.

Get yourself some bangers to put on the grill too.

Tesco is also selling packs with the same quantity of sausages in for £1.25.

Whacking a pack of mixed veg in the freezer is a good way of making sure you’re getting your five a day.

Sainsbury’s, Aldi and Tesco sells the same quantity for 79p.

There’s not much in mixed veg, so we would recommend going to Asda to save money.

You’ll want to have a tub of vanilla ice cream in the freezer for a late night snack or for a quick post-BBQ dessert.

Head to Asda and Tesco for 2litre tubs that will set you back just £1.02.

While Sainsbury’s is selling the same sized tubs for £1.19.

The UK’s cheapest supermarket for a basket of 152 items has been revealed – see which one.

Here’s a full list of little-known supermarket discounts from Tesco to Asda.

Horoscope today, Wednesday September 28: Daily guide to what your star sign has in store for your zodiac dates