The finding comes as the PM said today he WON’T tweak the app to make it less sensitive, despite millions being needlessly pinged and forced to quarantine.

Rishi Sunak and Boris Johnson said they would self-isolate after being ‘pinged’ by NHS Test and TraceCredit: AFP

The crisis, which comes just as the government lifts nearly all restrictions in England to help drive an economic recovery, has been dubbed the “Pingdemic”.

The YouGov survey found that four in ten NHS app users say they are unlikely to self-isolate if pinged by the app and a rapid test comes back negative.

As England lifts its Covid restrictions, coronavirus cases in the UK are at the same level as in mid-January, soaring past 50,000 new positive results in a day.

Hundreds of thousands of people are currently being asked to self-isolate in only one week – including the PM and the Chancellor.

Mr Johnson and Rishi Sunak were “pinged” by NHS Test and Trace as contacts of Covid-positive health secretary Sajid Javid.

So YouGov wanted to probe how willing Brits are to stay inside for 10 days – regardless of whether they’re vaccinated or have tested negative themselves.

Around two-thirds of the public said they would be likely to self-isolate if they weren’t showing symptoms, but were notified of coming into contact with coronavirus by someone they know (63%) or the NHS app (67%).

However, despite many people contracting Covid not experiencing any symptoms, as many as 26-30 per cent said they would be unlikely to self-isolate if they didn’t feel ill.

It is currently a legal requirement to self-isolate for at least 10 days if you come into close contact with someone who has coronavirus.

Despite the risk of getting fined, half of those surveyed (49%) said they would be unlikely to stay home if they subsequently tested negative for the disease.

If notified by the NHS, Britons who use the track and trace app would be more likely to isolate even if a negative rapid test confirms they don’t have the disease.

Mr Johnson has been ordered to fix the ‘pingdemic’ that forced over a million people to self-isolate on so-called Freedom Day.

England’s car plants, railways, supermarkets and pubs warned the government on Monday that the Covid tracing app, which has told hundreds of thousands of workers to isolate, was wrecking the recovery and pushing supply chains to the brink of collapse.

Tens of thousands are deleting the NHS app that pings close contacts of any positive case after a cases spike meant huge numbers, particularly in cities, were being forced to self-isolate at home despite having no symptoms.

The pingdemic is here and businesses need urgent change.

The pingdemic chaos threatened to dominate so-called Freedom Day, which got underway early July 19 as huge queues of Brits entered clubs at midnight for dancing, boozing and partying without any face masks or social distancing.

After a barrage of complaints the government said late on Monday that it would allow workers in critical roles, such as air traffic controllers and train signallers, to carry on working despite being “pinged” if they were fully vaccinated.

Some pubs have shut, supply chains are teetering and the car breakdown service AA warned of longer response times at call centres.

Carmaker Stellantis said its Vauxhall van factory in Luton would move from three shifts to two shifts for the rest of this week.

Nissan adjusted production in some areas of its Sunderland plant to counter lower staffing numbers.

Britain’s biggest rail operator, Govia Thameslink, said it may need to cancel some services in London and South East England.

Retailer Marks & Spencer said it may have to reduce business hours.

“Where the industry will see the pain is in the supply chain, because logistics runs tight anyway to be efficient,” said Marks & Spencer’s CEO, Steve Rowe.

Pub operator Greene King said it had to temporarily close 33 pubs last week due to a lack of staff.

He said: “Go forward into the next step with all the right prudence and respect for other people and the risks the disease continues to present.”

He said: “We have to be careful, we have to remain vigilant, our border controls remain in place.

“Our expectation and recommendation is that people continue to wear masks and take both personal and corporate responsibility.

But Mr Zahawi said “I’m confident that we’re doing the right thing” in lifting restrictions despite being urged by many scientists not to press ahead.

He added: “It’s right that we now move on from Government by diktat because we’re wanting to get our lives back, get back to normality.” 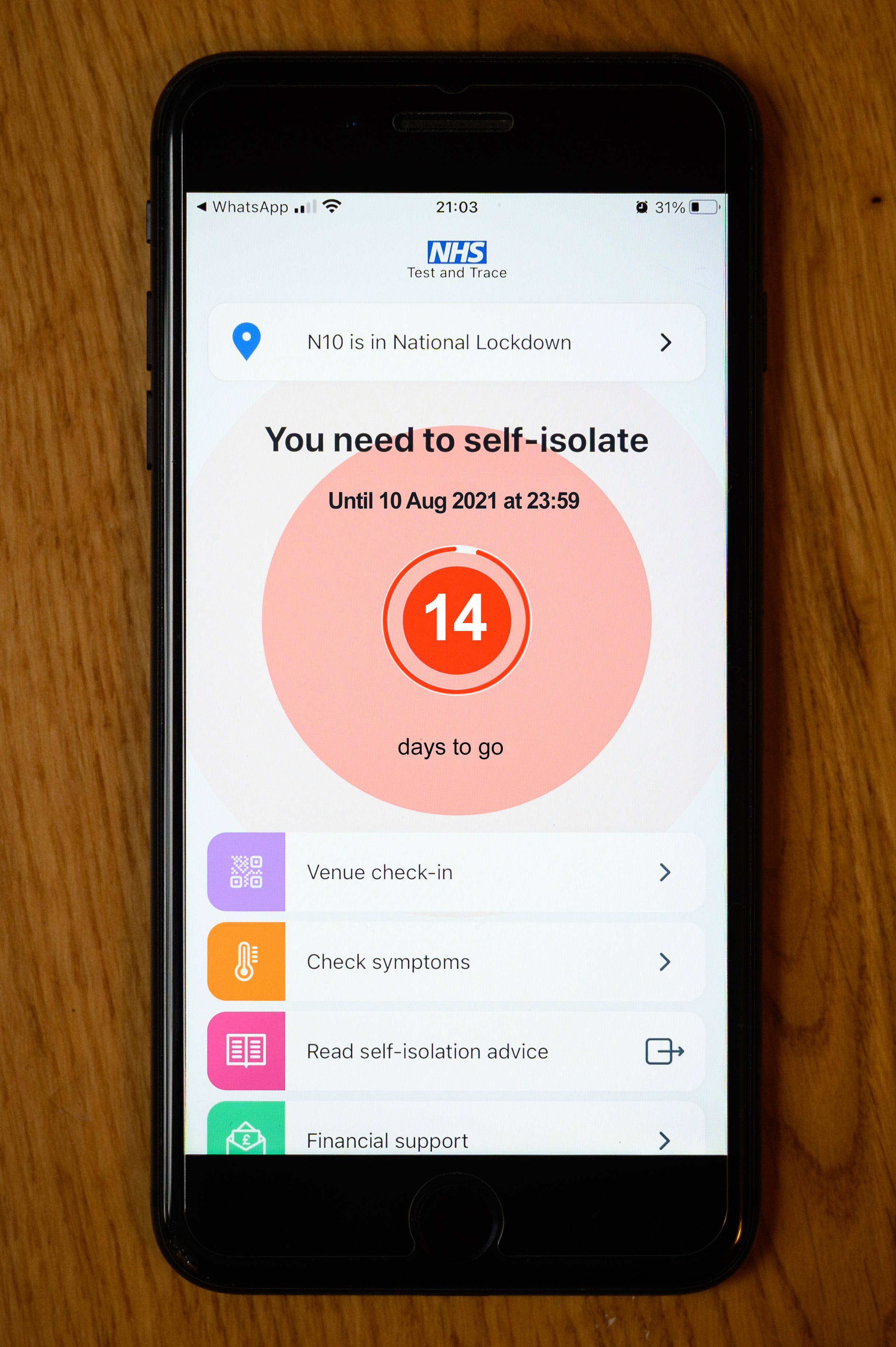 An alert on the official NHS Covid-19 Test and Trace app informing the user to quarantineCredit: Getty