MORE than 34million people are facing tougher restrictions than before the national lockdown in the new “unfair” tier system.

Boris Johnson could be facing Tory rebellion after 99 per cent of England’s population was placed in the highest tiers, two and three today. 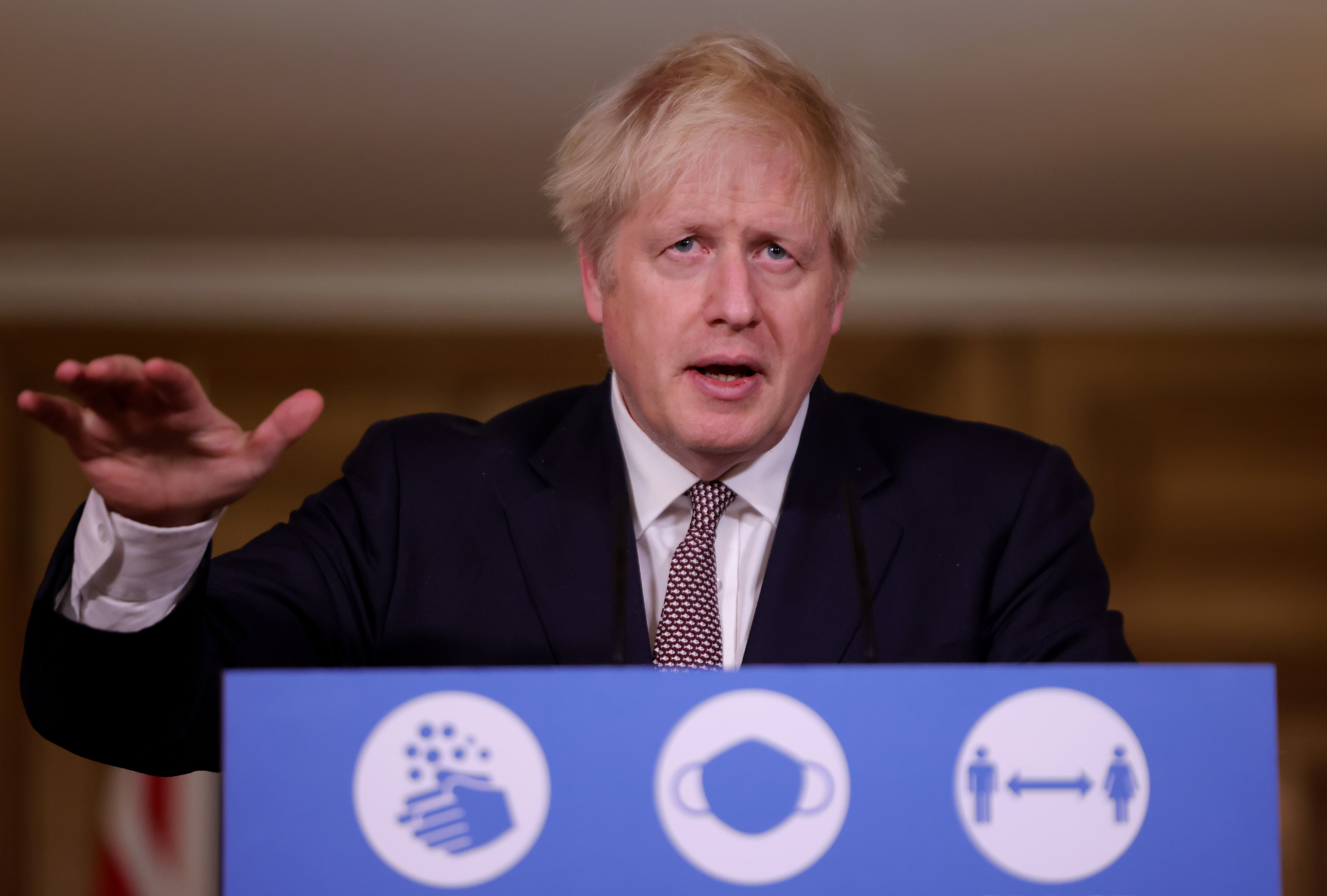 The PM claims they were necessary to prevent a “New Year national lockdown” after it was revealed just Cornwall, the Isle of Wight and Isles of Scilly placed in the lowest Tier 1

Over 23 million people in the Midlands, North East and North West have been placed in the most restrictive Tier 3, where almost all household mixing is banned, bars and restaurants are limited to takeaway and delivery.

In total, 34.1 million people – 61 percent of the population – are now worse off after being shifted into a higher tier than before the November national lockdown.

55 million people are now in tiers two and three – with tougher restrictions than last time. 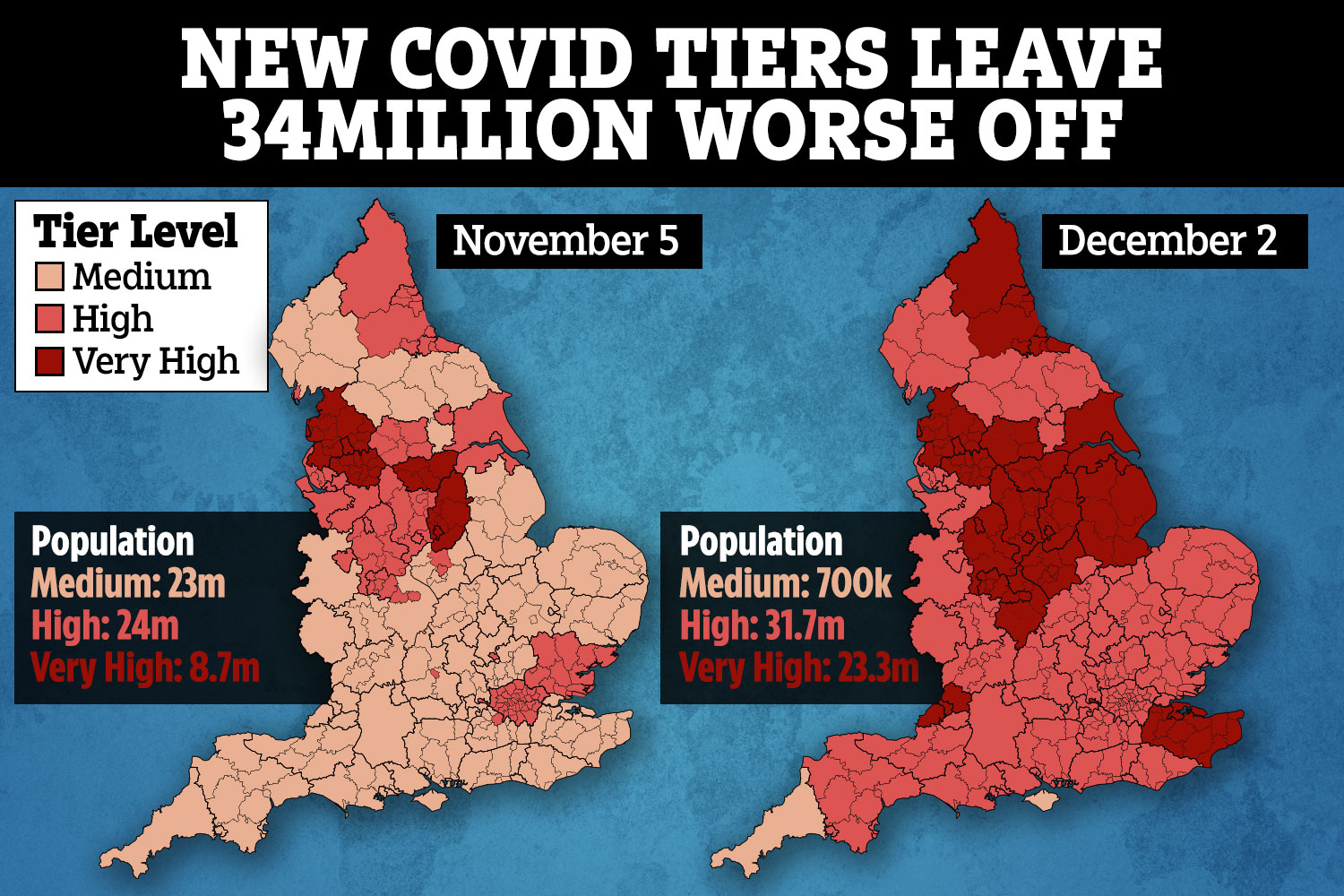 Mr Johnson faces revolt on Tuesday, when the tough new measures are put to a vote – on the day they are due to start.

Around 29.5million Brits are being bumped up one level, while 4.6million are moving up two.

A minuscule 1.8million, making up just three per cent of the population, will have rules relaxed.

The Liverpool city region was dropped from tier 3 to tier 2.

The latest lockdown restrictions means all but 1.3 per cent of the country will be placed in the highest tiers on December 2.

Speaking in Downing Street after emerging from 14 days of self-isolation, he said: “I know this will bring a great deal of heartache and frustration, especially for our vital hospitality sector – our pubs, our restaurants, our hotels, in so many ways the soul of our communities – which continue to bear a disproportionate share of the burden.

“I really wish it were otherwise, but if we are to keep schools open, as we must, then our options in bearing down on the disease are necessarily limited.”

Former Cabinet minister Damian Green, whose Kent constituency has fallen into a tier 3 category, despite a relatively low case rate, said: “The Government are in more trouble than they realise.

“These decisions have enraged a lot of the Tory heartlands, as well as a lot of our newly-won constituencies in the North and Midlands.

“You could be looking at the biggest rebellion of this Parliament.”

Tonight Labour refused to reveal the way they would vote, meaning the PM could be forced to rely on Labour support to get measures through the Commons on Tuesday.

Sir Graham Brady, chairman of the 1922 Committee, has been vocal in his disagreement with the new tier system.

He told the BBC: “I will vote against it. I have severe reservations on so many different levels. I do think that the policies have been far too authoritarian.”

Liam Fox and John Penrose, former ministers, hit out at the “illogical decision to place their Somerset consistencies into tier 3 because of their closeness to Bristol.

The PM has warned that there would be a new national lockdown in January if Brits don’t follow the new tier rules.

Boris Johnson told the nation at a press conference this evening that “your tier is not your destiny – every area has the means of escape”.

The news comes as:

He promised that “together we can get through this winter, suppress the virus, and reclaim our lives and all the things we love”.

The strict area rules will be reviewed at least every 14 days – with the possibility of slipping down a Tier if the rate of infection drops.

The PM admitted the tougher restrictions would “bring a great deal of heartache and frustration” and admitted that pubs and restaurants had born a “disproportionate share of the burden”.

But if schools were to remain open, other things had to close.

Boris said he was “convinced” that in just a few months the nation would have a vaccine and “by April things will genuinely be much, much better.”

But he began with a warning that the dangers of coronavirus “have not gone away” and “we risk losing control of this virus all over again and forcing us back into a new year national lockdown – with all the damage that would mean”.

Yet Chief Medical Officer Chris Whitty said it would be a “mistake to make too many judgements too early”.

He said that “hopefully in some weeks to come, more areas can go into tier one” but that it would be an error to do that just before Christmas. 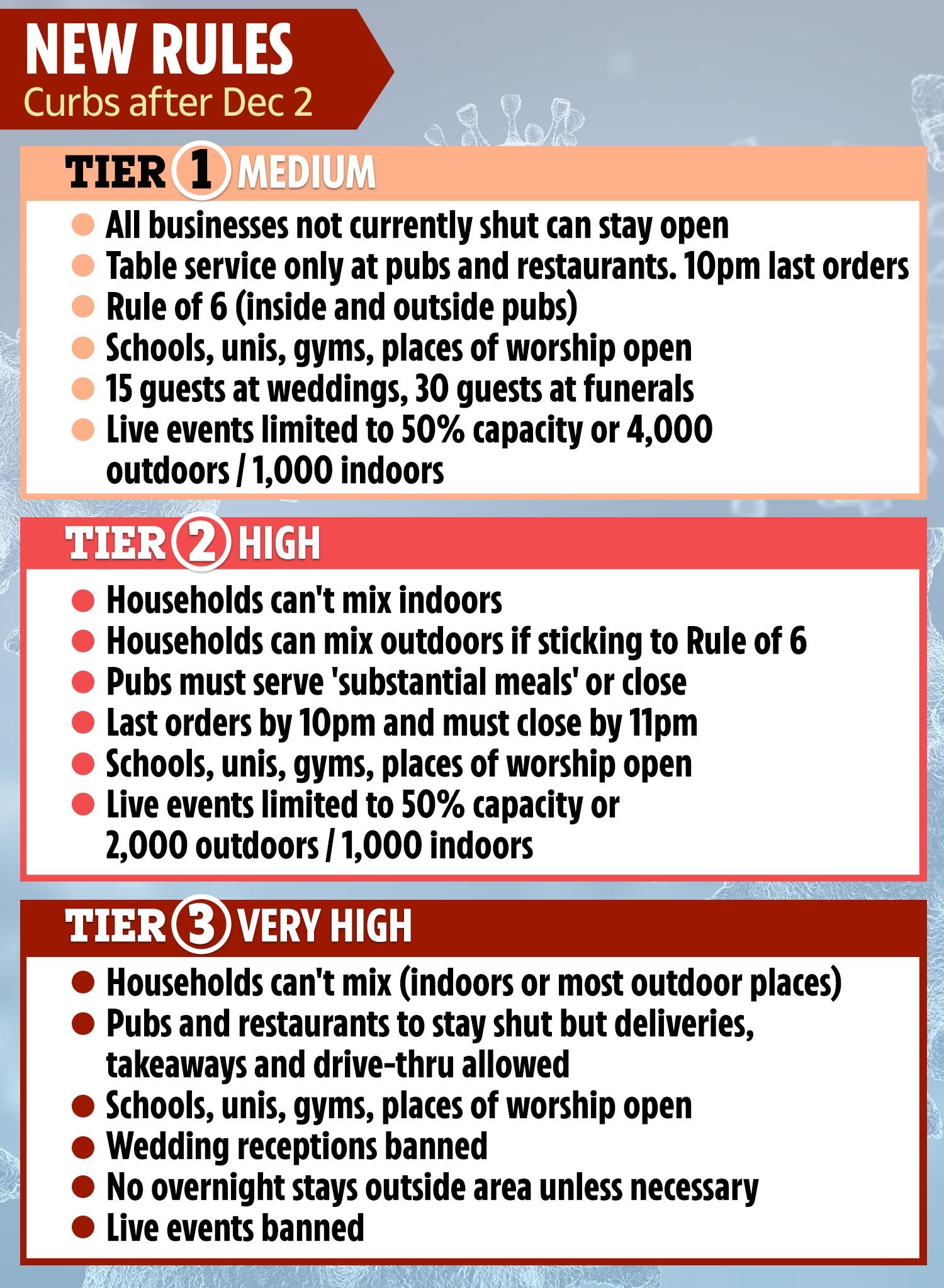 And he urged the nation to “be sensible” and “don’t do stupid things” for their best shot at getting out of strict rules in the New Year.

He warned people not to cuddle elderly relatives at Christmas as they may not “survive to be hugged again”.

Speaking at tonight’s government briefing, Sir Patrick Vallance stressed that “hugging elderly relatives is not something you want to go out and do”.

Underlining Sir Patrick’s point, Professor Whitty added: “It’s not illegal but the fact that you can do something doesn’t mean you should.”

He added: “It does not make sense because you could be carrying a virus and if you’ve got an elderly relative, that would not be the thing you’d want to do in a period where we’re running up to that point where actually we might be able to protect older people. 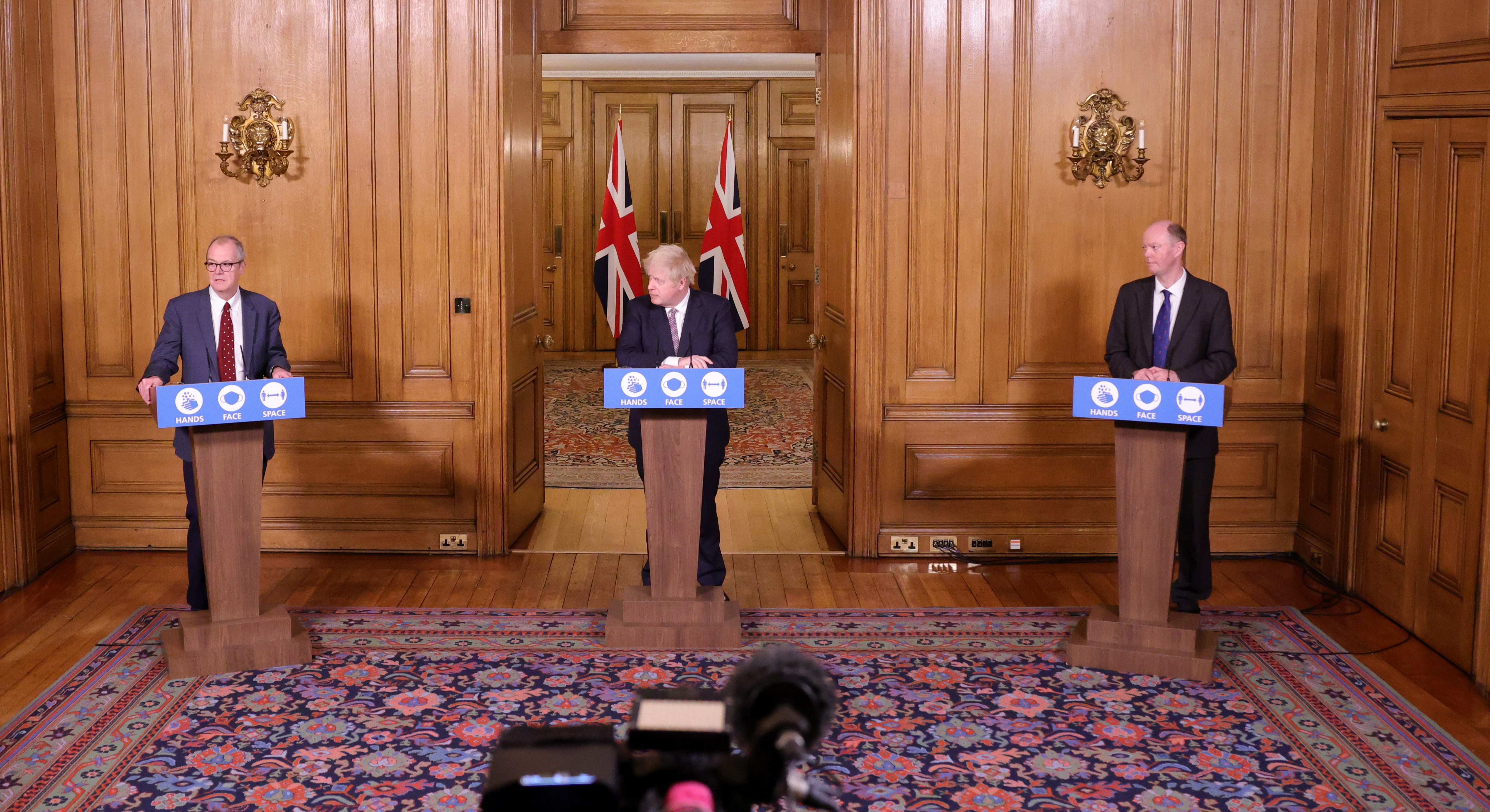 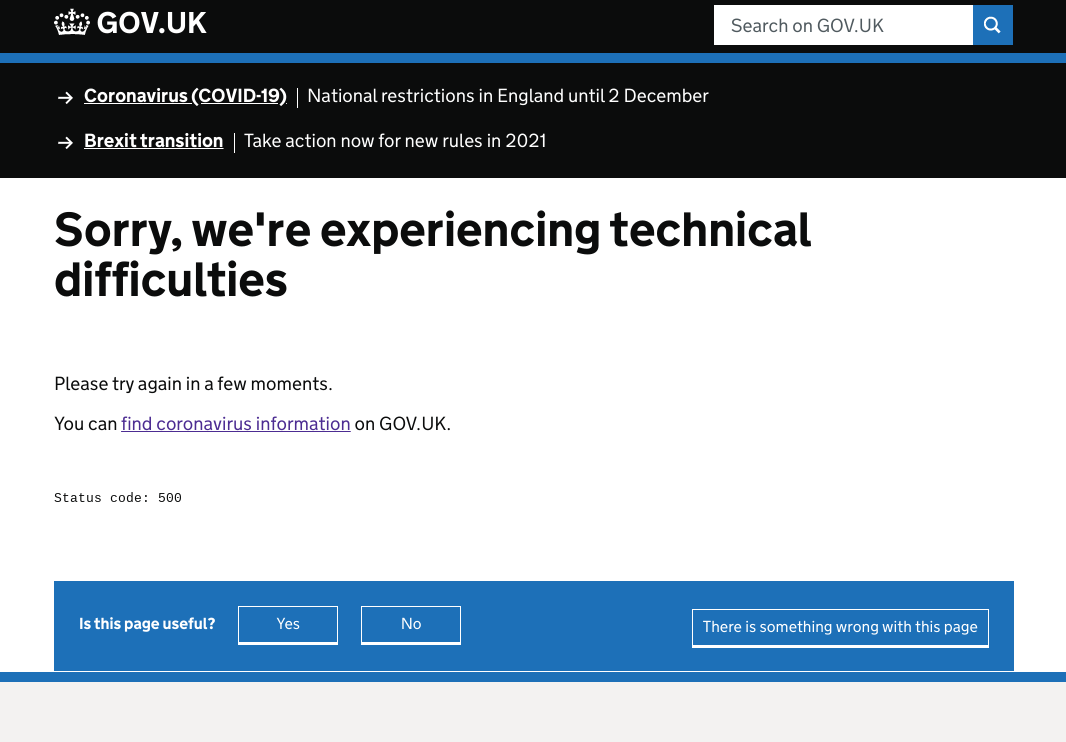