A HULKING bodybuilder who refused to close his gym clashed with ten cops as an anti-lockdown protest erupted in violence.

Andreas Michli was one of multiple people arrested during the march through Parliament Square as activists fought with police. 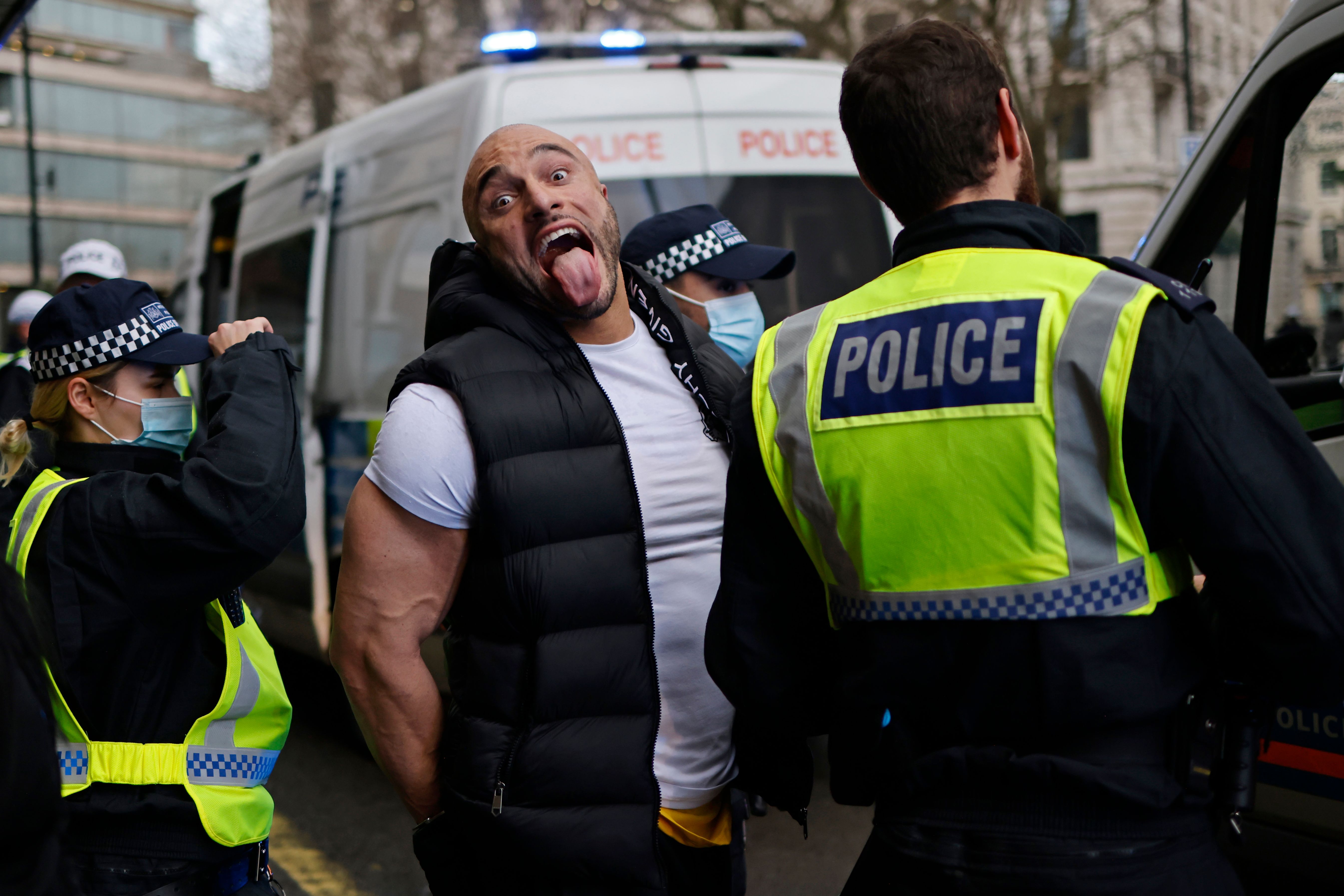 Andreas Michli is arrested at an anti-lockdown protestCredit: AFP or licensors

It took around ten cops to detain the gym ownerCredit: Newsflare 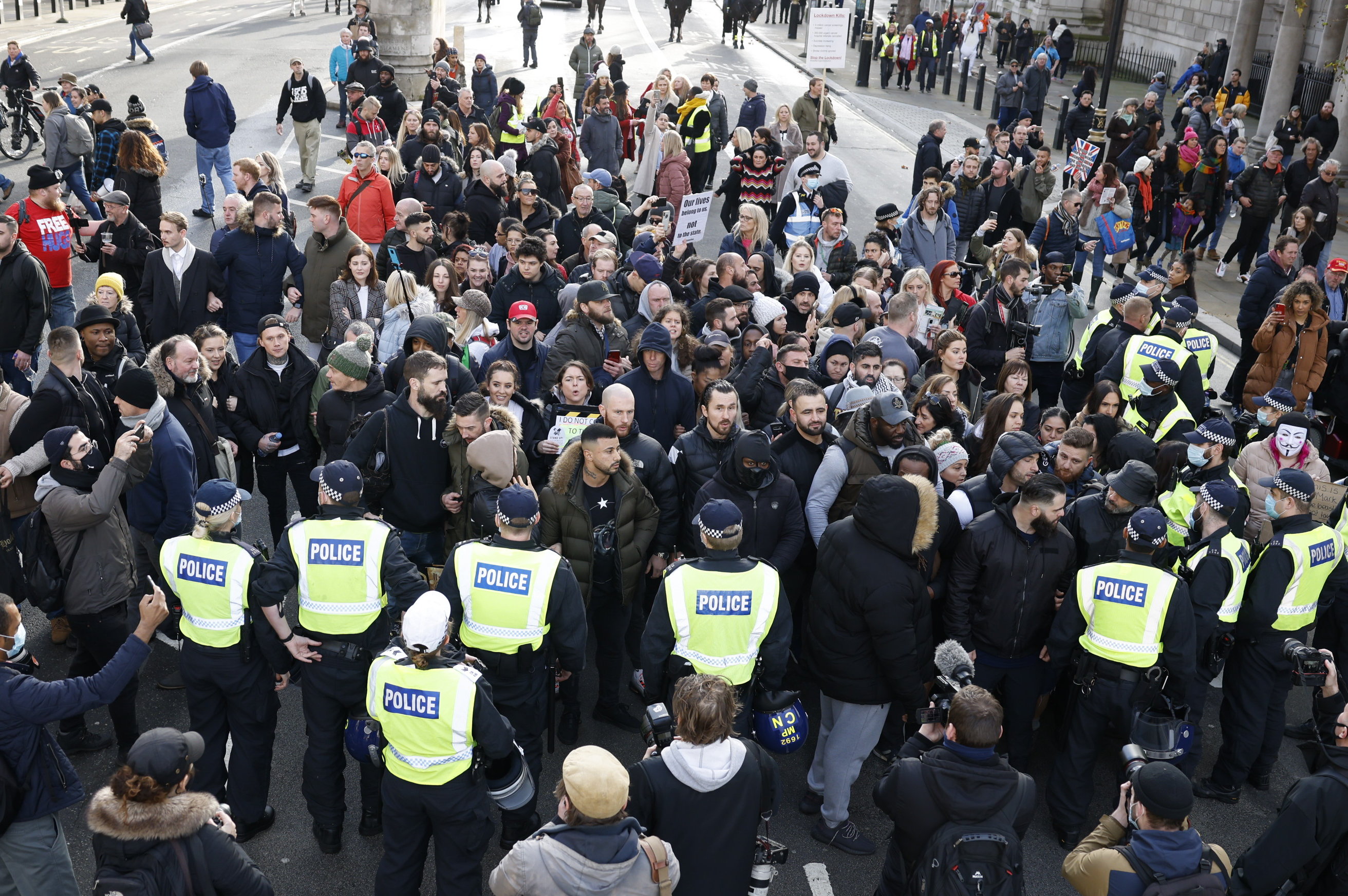 Around ten cops struggled to take down the 34-year-old, who was left facing a £67,000 fine after refusing to shut the doors to Zone Gym in Wood Green in the second lockdown.

After he was finally arrested, he vowed: “I’m going to keep doing this until we’re free.”

Heundreds of people have flooded London today despite the capital currently living under the strictest Tier 3 restrictions.

Ugly scenes saw protesters grappling with police officers as they packed out streets to moan about Covid-19 freedoms.

Some were wrestled to the ground after tensions mounted this afternoon. 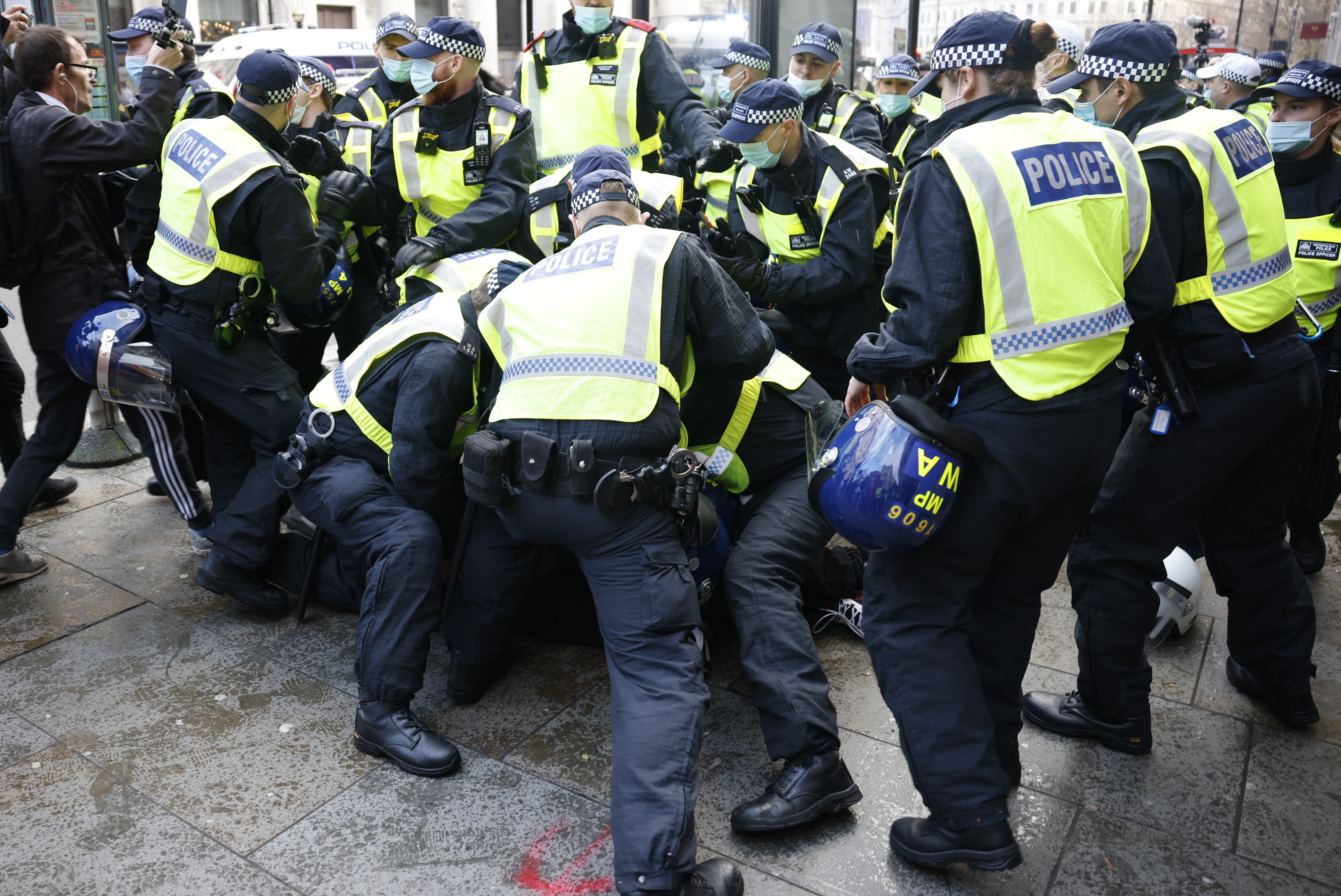 There were ugly scenes as protesters clashed with copsCredit: London News Pictures 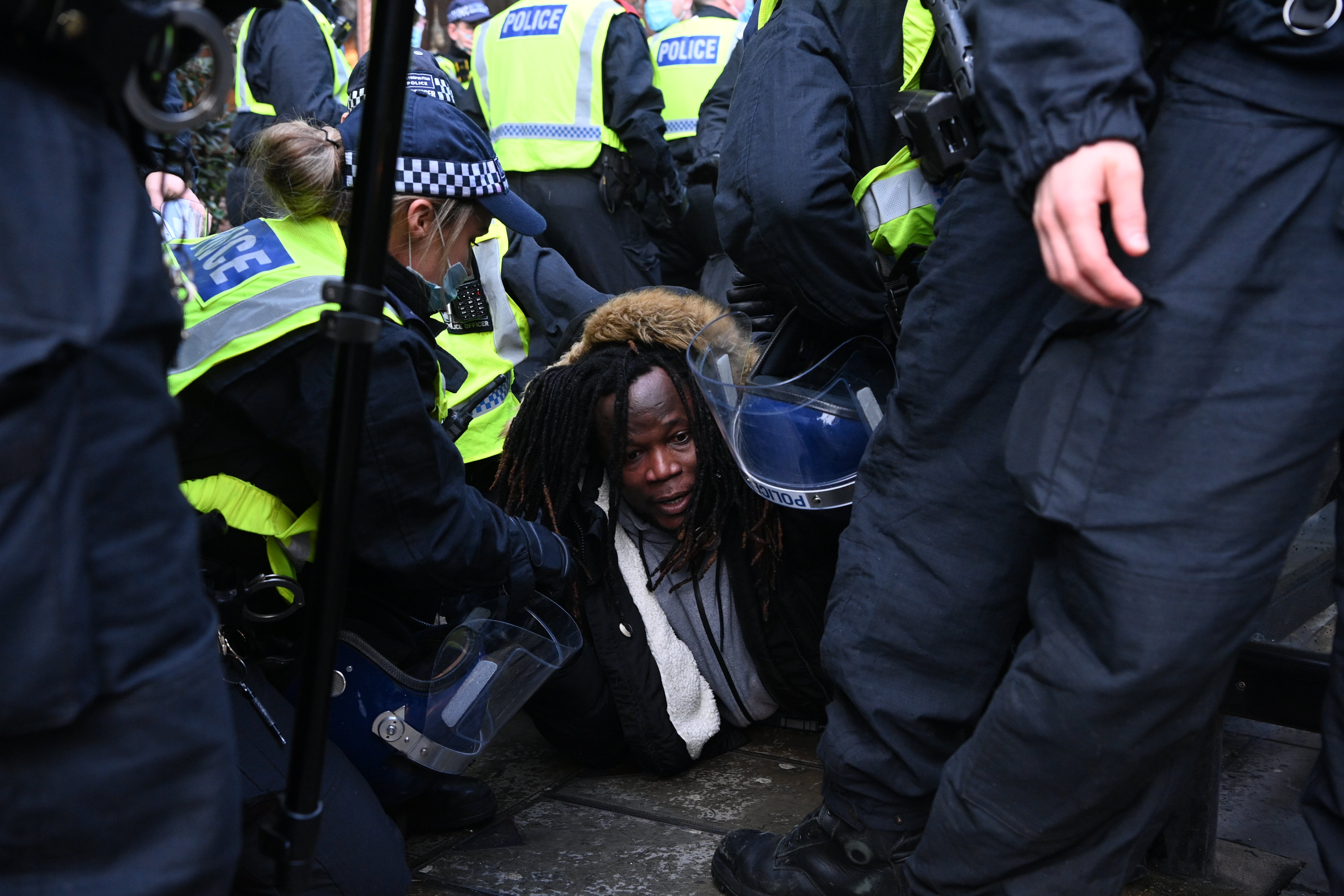 Multiple people were arrested during the marchCredit: London News Pictures

Protesters carried placards reading, “We do not consent” as they marched through London.

They also held signs against the Covid vaccine as they flouted social distancing to gather together.

It came despite warnings the new Covid-19 variant that ripped through the South East is 50 per cent more contagious than the original strain.

The Met Police said protesters were “gathering in significant numbers” but have not confirmed how many arrests have been made. 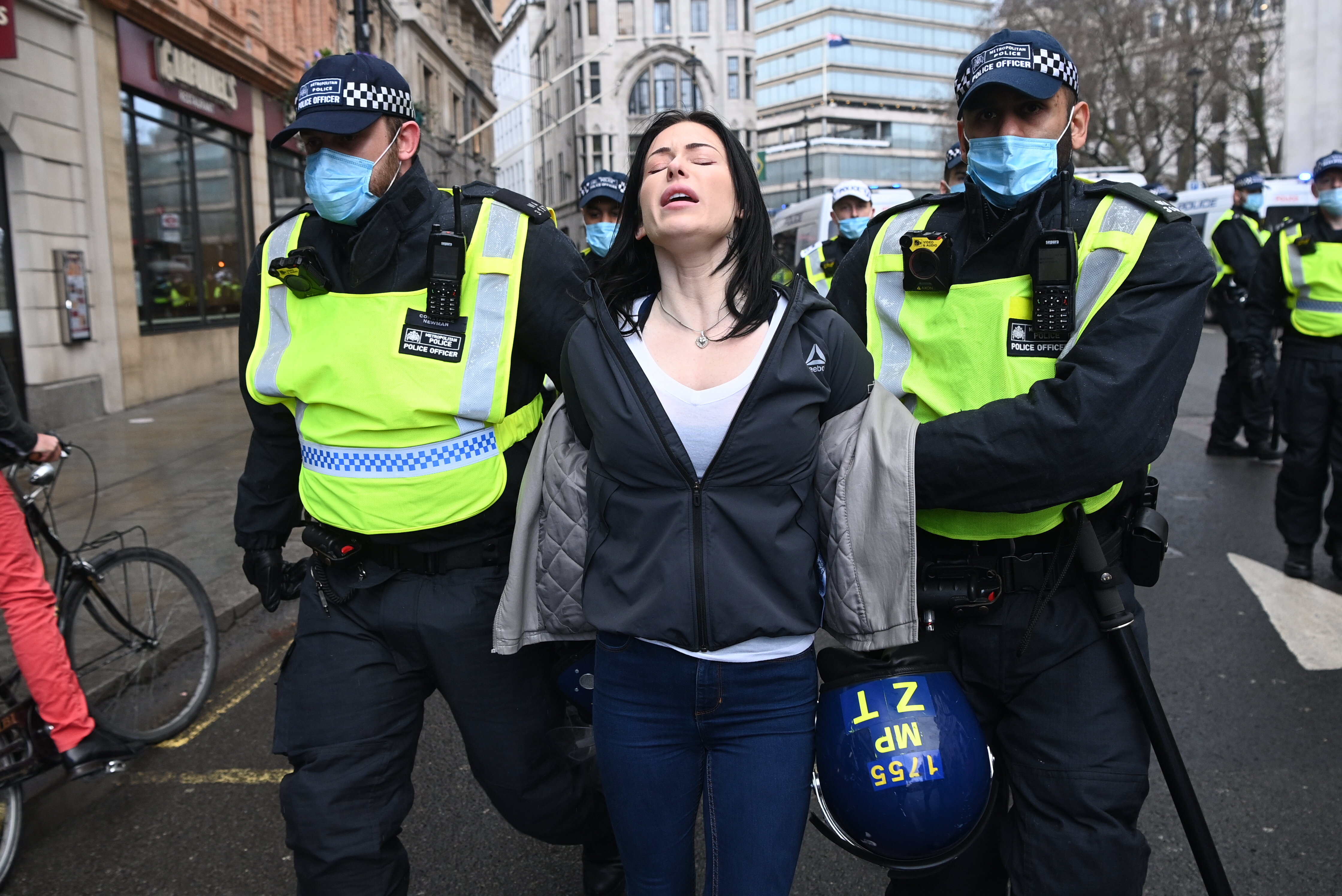 A woman is led away by police todayCredit: London News Pictures 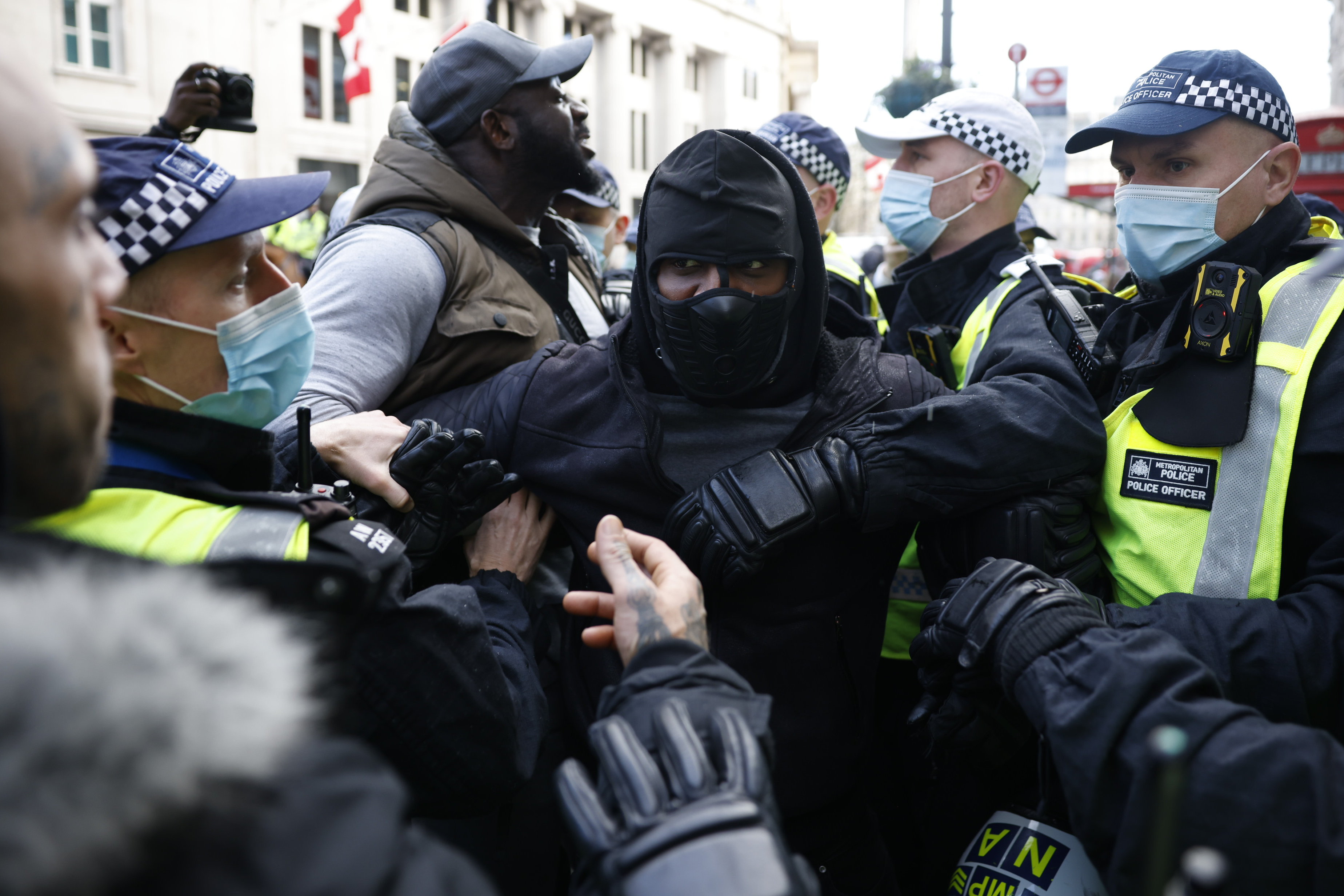 Scotland Yard warned people not to attend large gatherings this weekend in an open letter.

The force said extra officers will be on London’s streets to encourage compliance with strict Tier 3 Covid-19 regulations and to “swiftly clamp down on those wilfully and dangerously ignoring them”.

Covid laws ban gatherings of more than six outdoors but there is a list of exemptions – including protests where all relevant safety precautions are in place.

The Police Federation also wrote to Home Secretary Priti Patel about the protests. 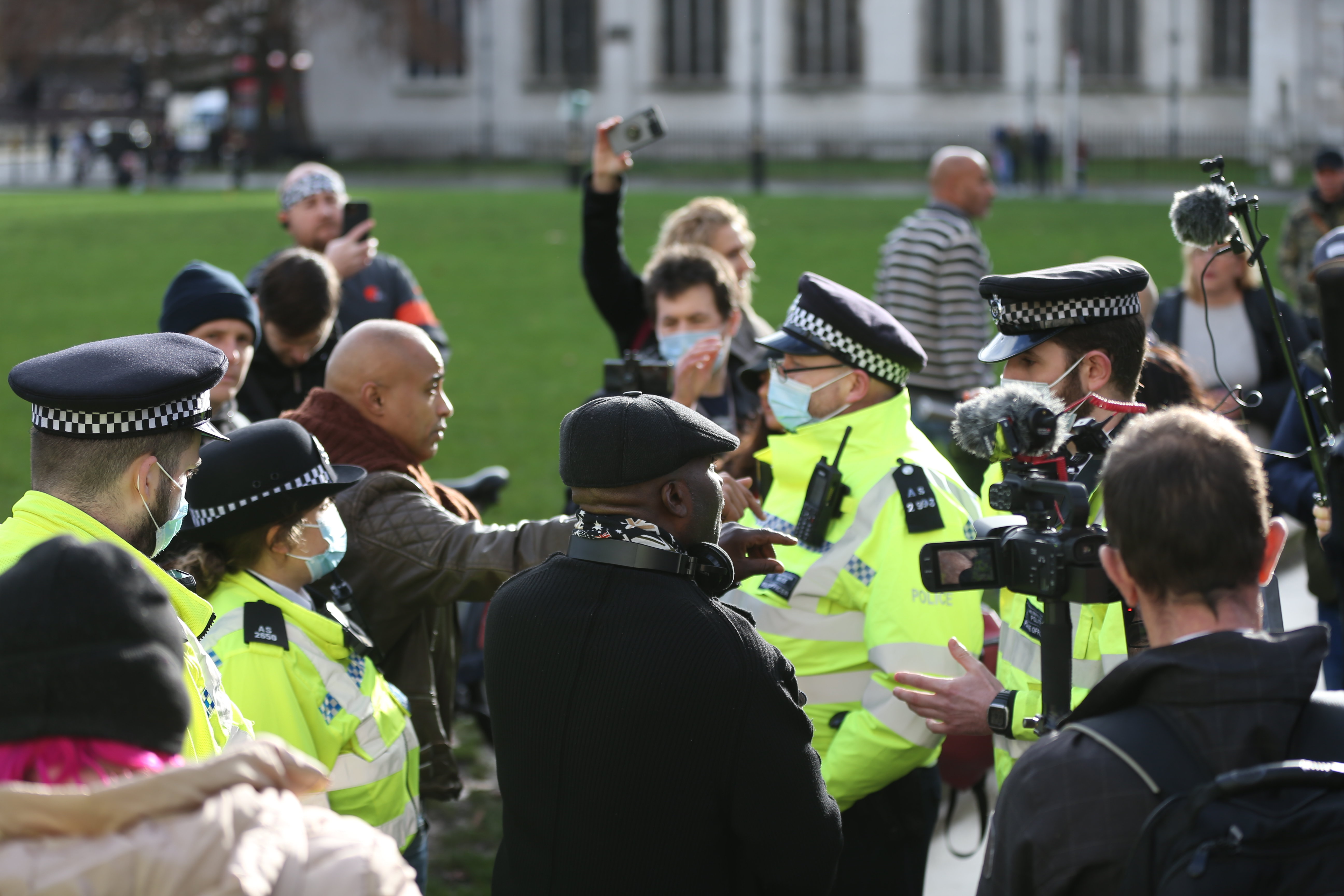 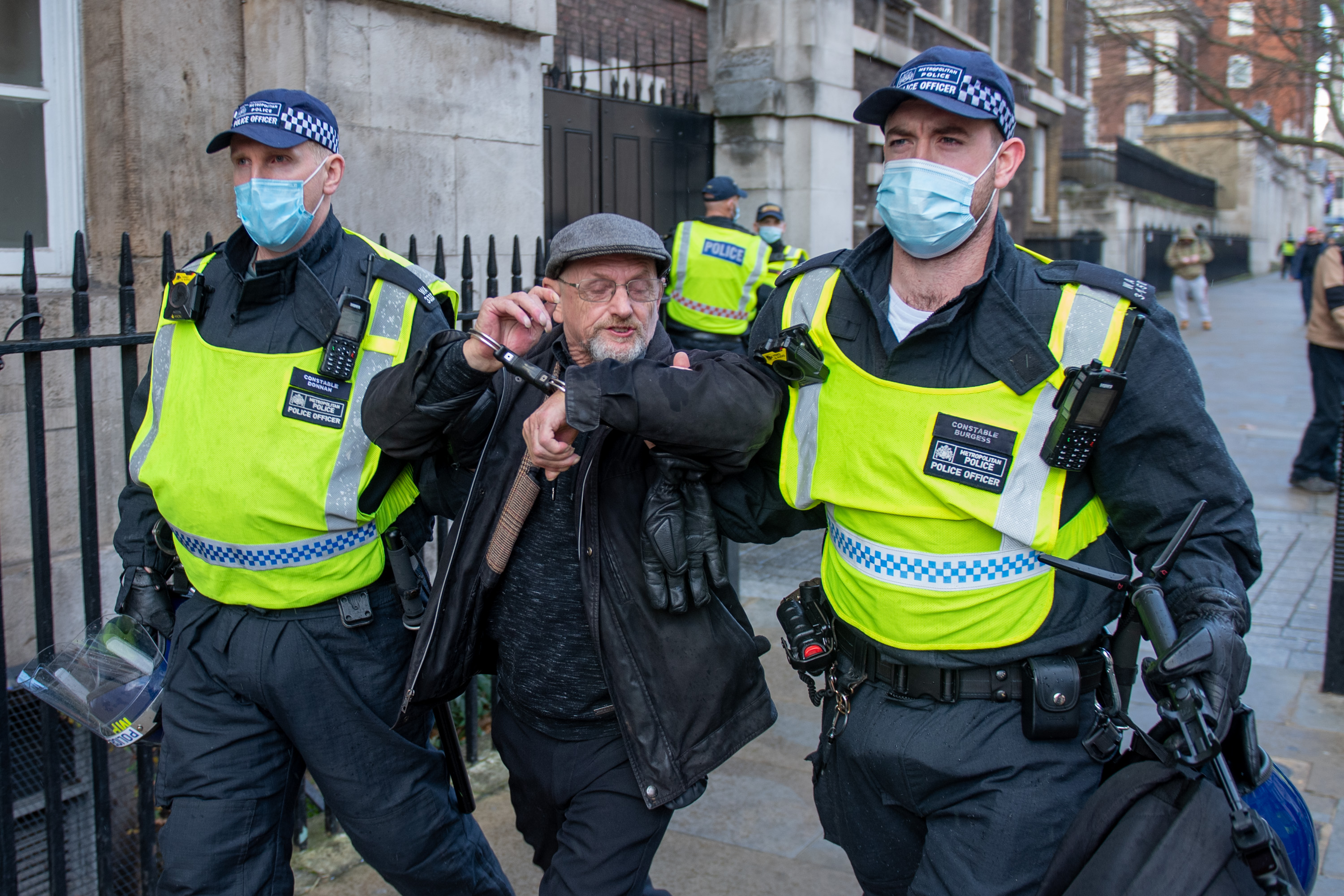 A protester is led away in handcuffs after violence eruptedCredit: London News Pictures

While Deputy Assistant Commissioner Laurence Taylor said: “Where we become aware of planned events that will breach regulations, we will try to engage with organisers or venues to make them fully aware of the restrictions that are in place to keep people safe.

“However, if people do not listen to our advice and fail to comply with the rules, we will be forced to take enforcement action.

“With infection rates rising rapidly across the capital, we all need to play our part in preventing the spread of the virus.

“This is the final weekend before Christmas, so now is not the time for complacency. I know Londoners know what they should and should not be doing and I would urge everyone to act sensibly and do their part to keep our city safe.

“Sticking to the guidelines put in place to keep us all safe and well is now more important than ever.

“This weekend we will ensure we deal with the activity of a few so as not to expose our communities at even greater risk during this pandemic.” 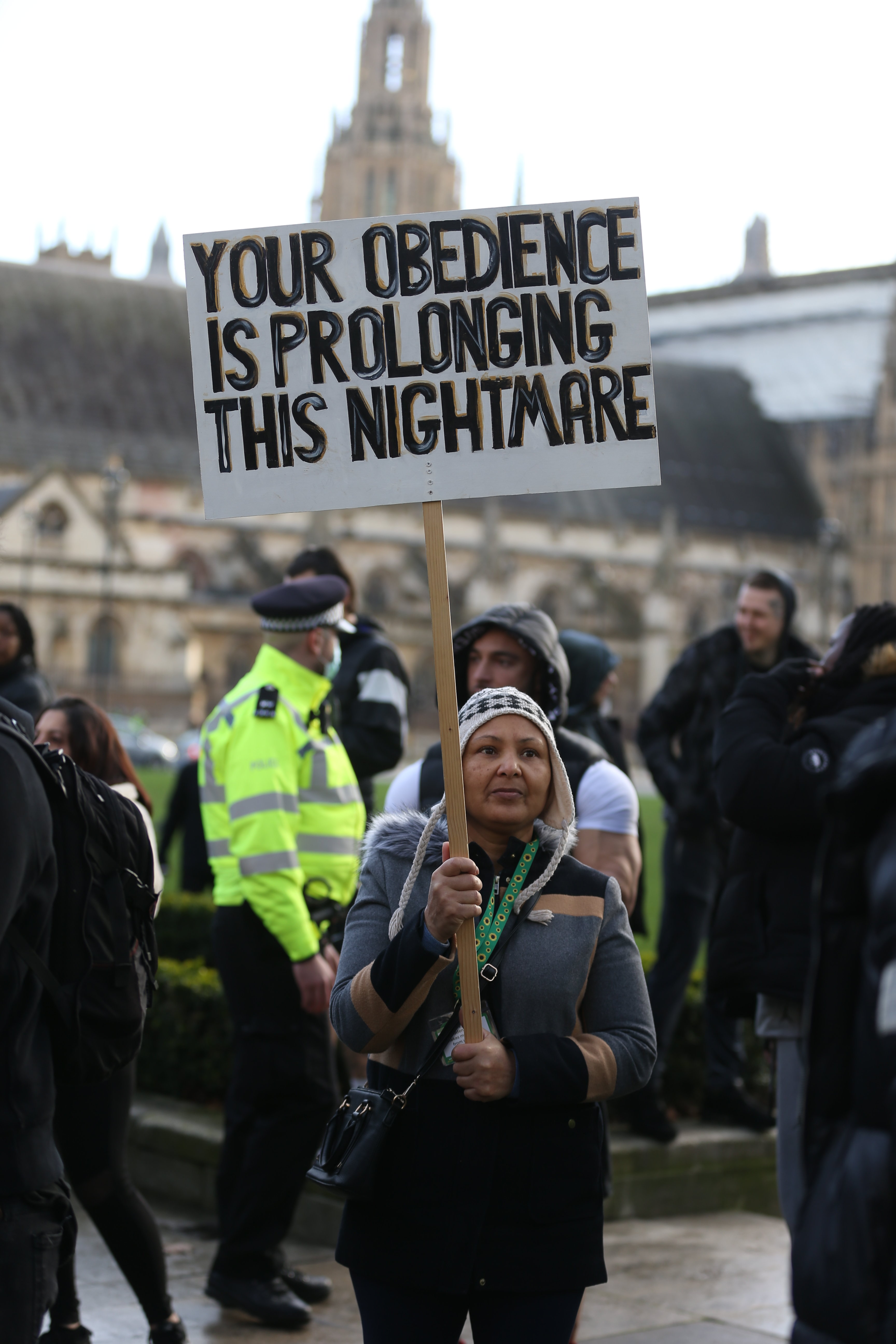 A protester holds up a sign todayCredit: �2020 Martyn Wheatley / i-Images 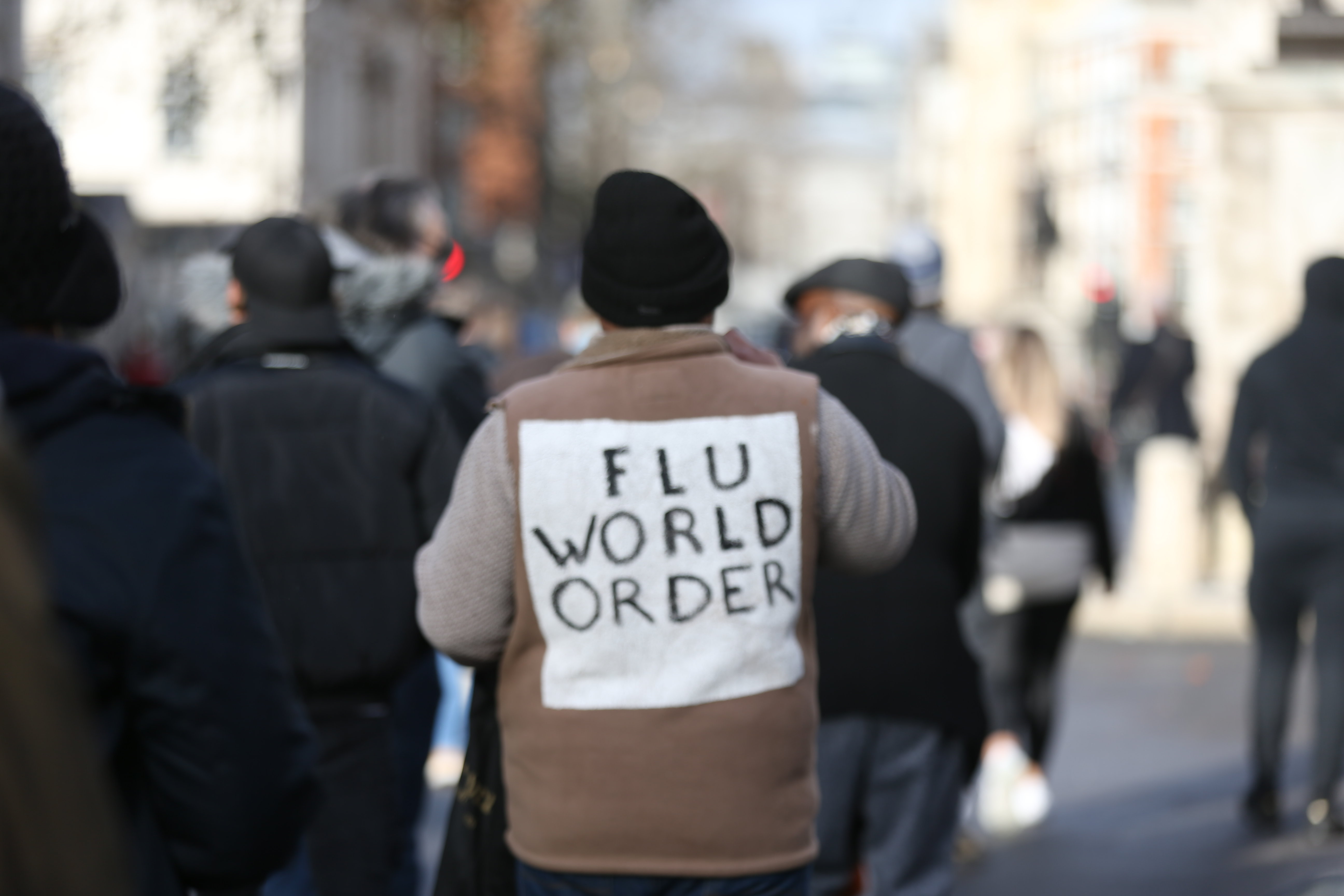 The anti-lockdown activists were joined by anti-vaxxersCredit: �2020 Martyn Wheatley / i-Images 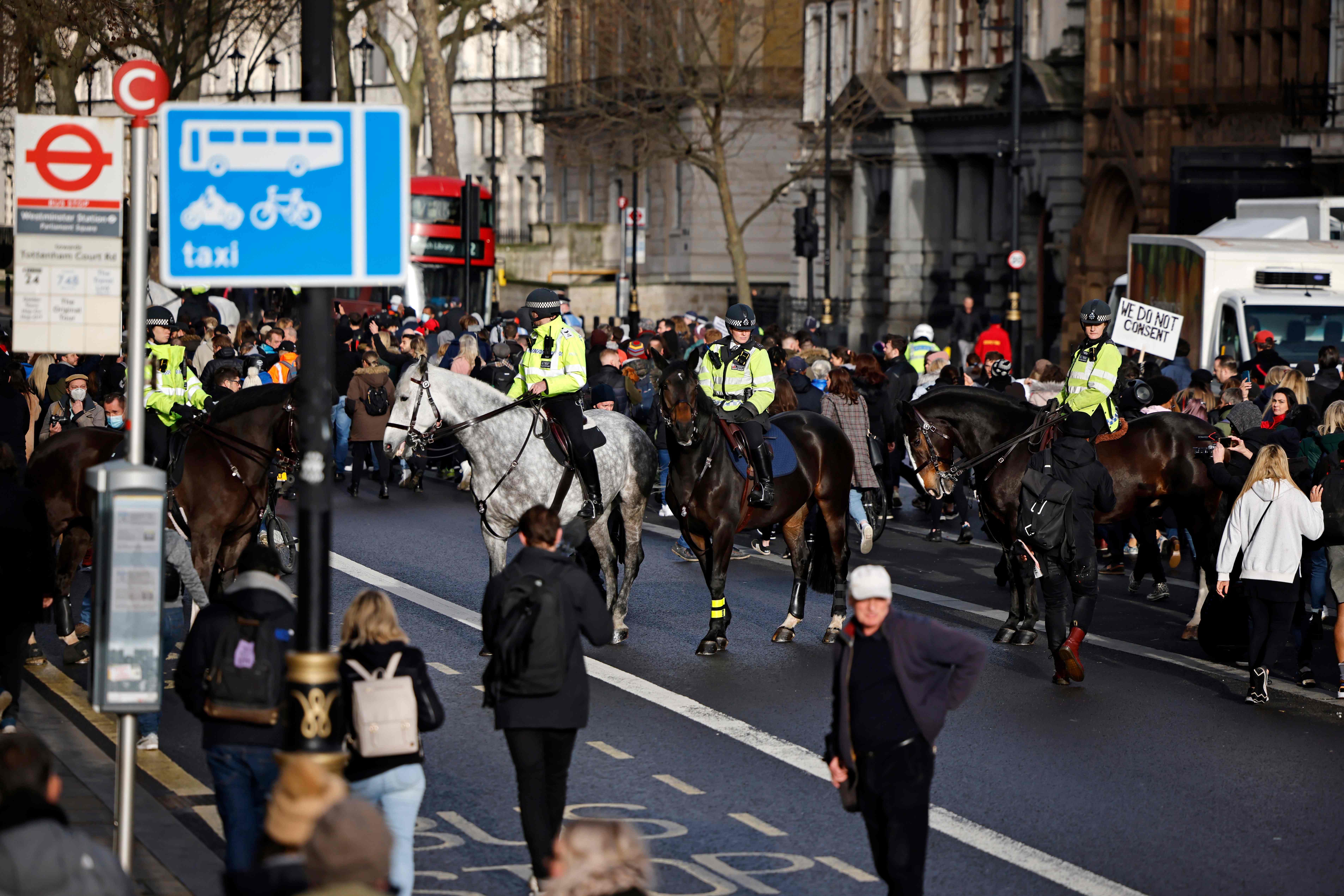 Police on horseback in the capital todayCredit: AFP or licensors 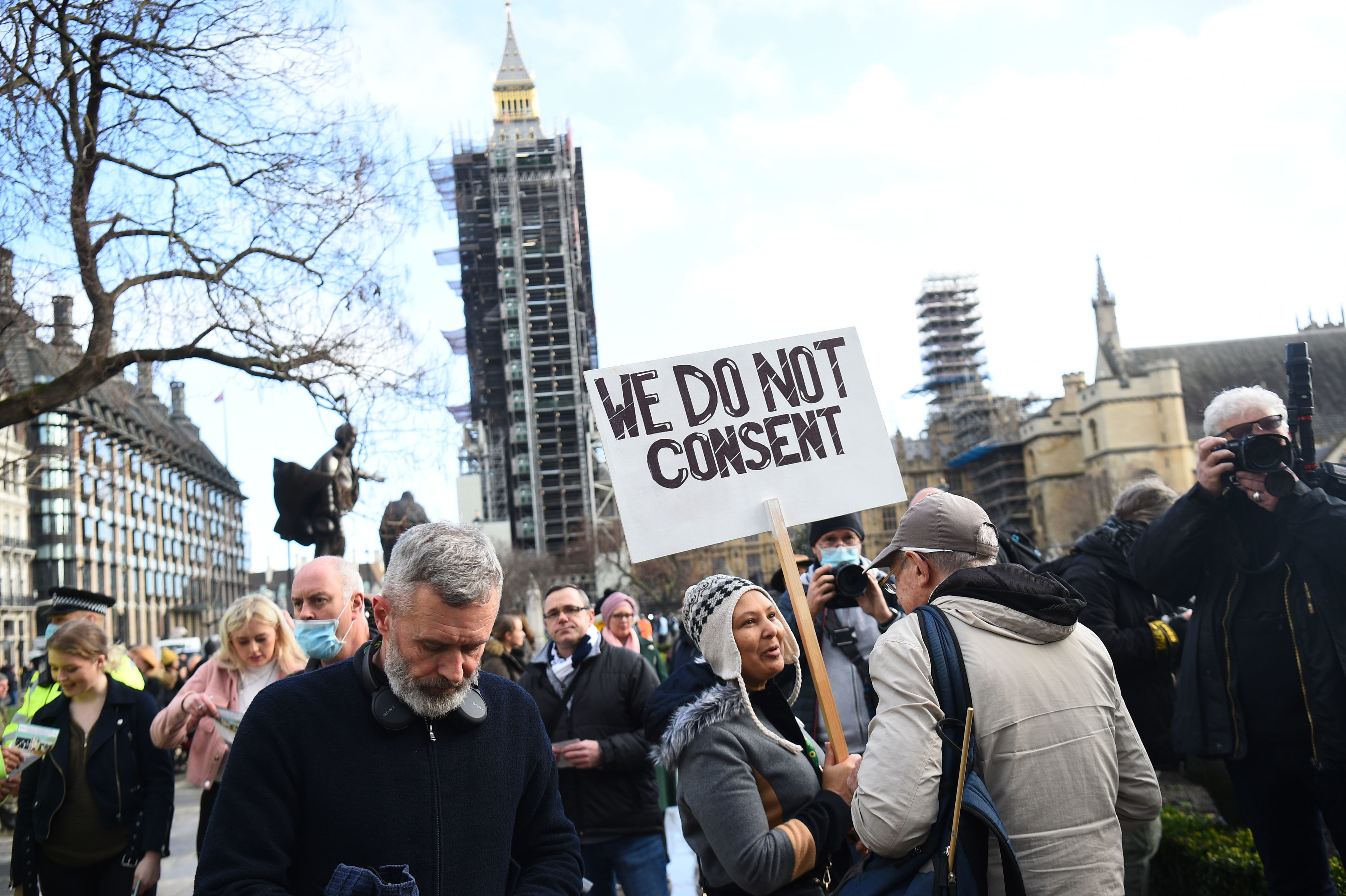 Many were not wearing face masksCredit: PA:Press Association 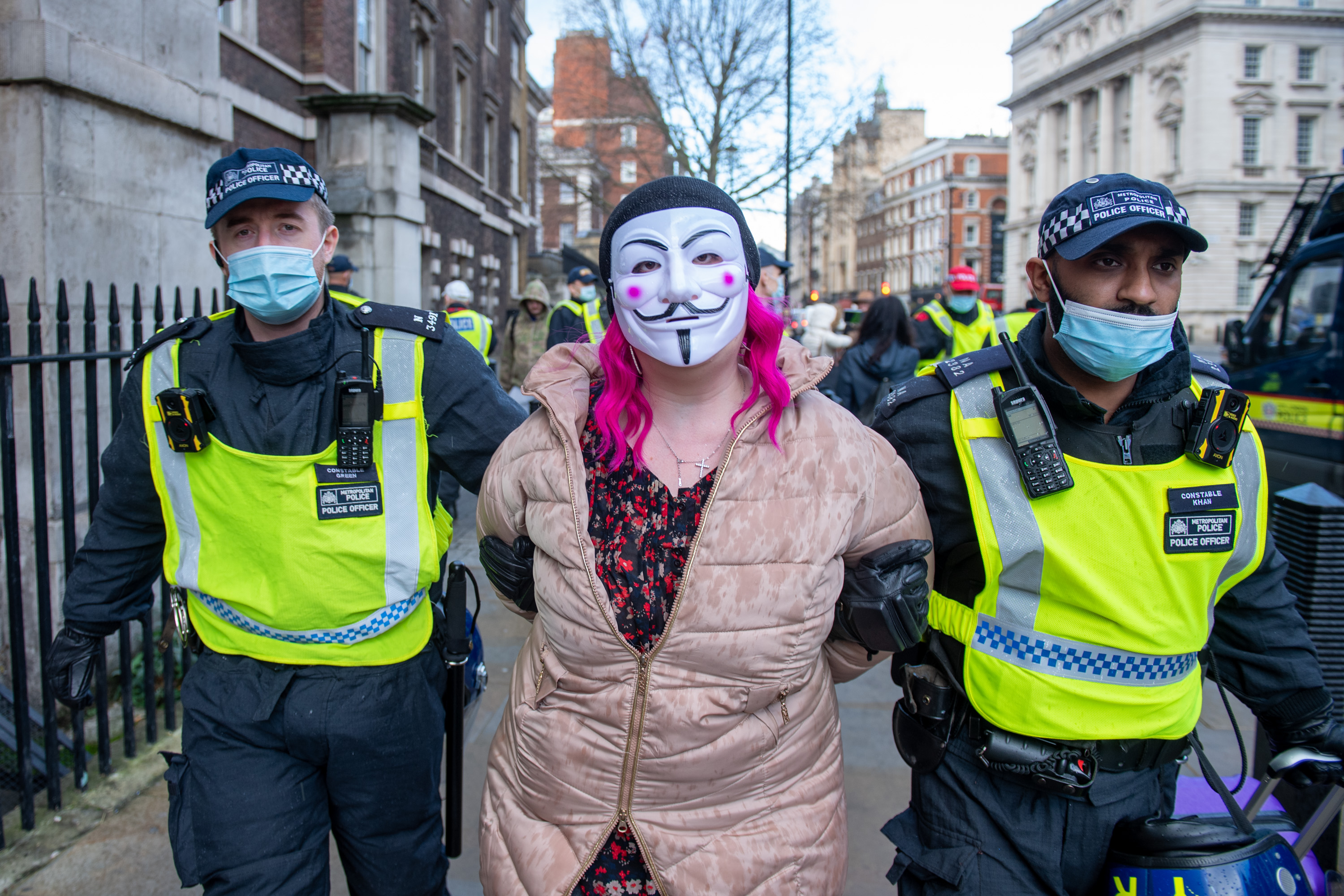 A woman is escorted by copsCredit: London News Pictures