CORONAVIRUS cases have plummeted 70 per cent since the peak at the beginning of the New Year, new data has revealed.

Data from the ZOE Symptom Tracker app states that cases have also decreased by 29 per cent in the last week, raising hopes that the third national lockdown could be eased.

The chart above shows how cases of the virus have plummeted since the start of the New YearCredit: ZOE

Figures show that around 1 in 170 people across the UK have symptomatic Covid.

The experts stated that since the peak of 69,000 daily new cases on January 1, cases have dropped by 70 per cent.

At present there are 20,360 daily new symptomatic cases in the UK in comparison to 28,645 last week.

Data from the Office for National Statistics (ONS) also released this afternoon revealed that while the number of people testing positive for the virus has dropped – cases numbers still remain high.

It stated that around one in 70 people currently have Covid-19 in England.

Figures from the ONS account for the week ending January 30 and show that 846,900 people in England had the coronavirus. 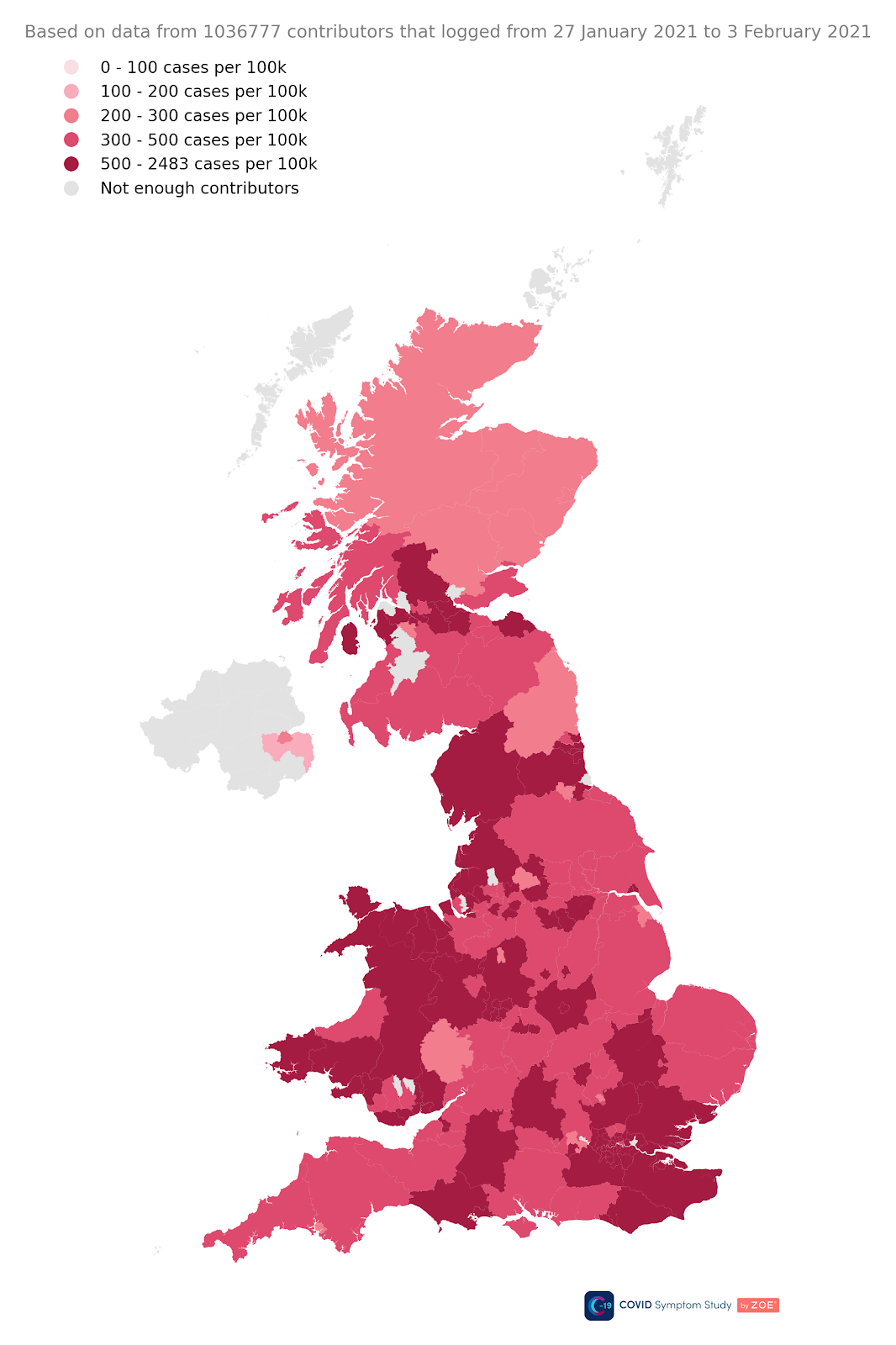 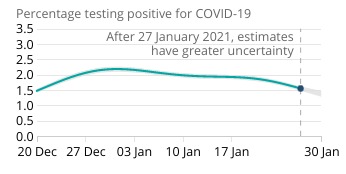 Estimates from the ONS show a drop in the amount of people testing positive in EnglandCredit: ons

The lead of the ZOE Symptom Tracker app, Professor Tim Spector said while cases are dropping, now is not the time for hesitancy.

He said: “We are making good progress against this virus, with 10 million vaccinations done and cases down by 70 per cent since the peak at the beginning of the year.

“On top of that, we are also seeing hospital admissions from Covid drop too. But it’s not the time for hesitancy.

“We’re now at the same levels of new cases we were when we came out of lockdown at the end of November, with the difference being our NHS is overstretched and death rates are still high. Importantly, we still need to give the vaccines a few more weeks to take effect and drive cases lower.”

Prof Spector’s comments come after Public Health England (PHE) yesterday revealed that cases of the virus had fallen across all regions of England.

PHE’s weekly Covid-19 surveillance report stated that cases per 100,000 have fallen across all regions and are now highest in the West Midlands with a rate of 319.9. 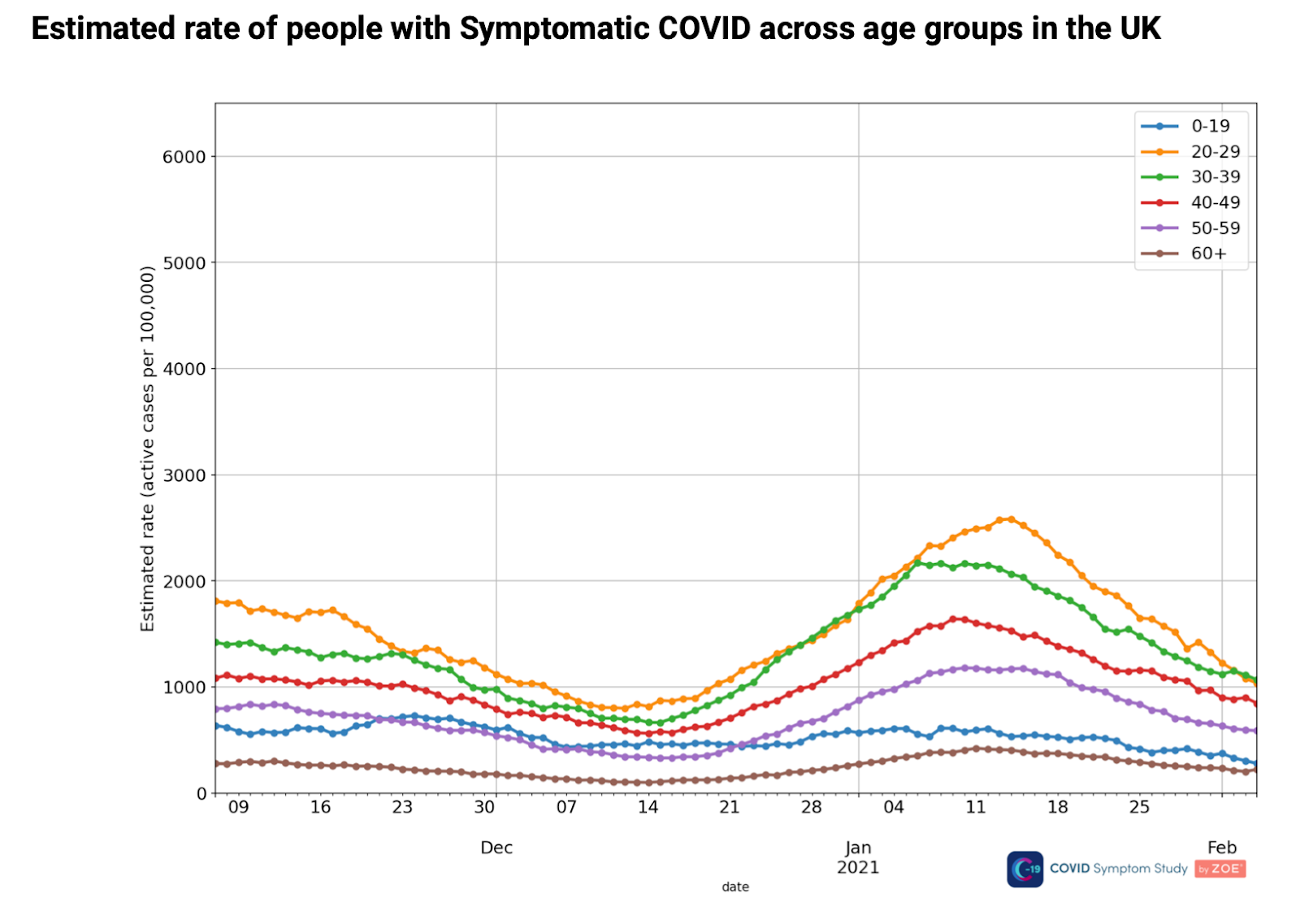 Figures from the previous surveillance report stated that there had been 3,225,301 confirmed cases.

Data from the ONS published today stated that on a regional basis, London has had the highest percentage of people testing positive for Covid-19.

The report stated: “Previously the South West showed substantially lower rates of people testing positive than all other regions.

“However, this gap has now closed and the South West has similar rates to Yorkshire and The Humber.”

PHE’s medical director, Dr Yvonne Doyle echoed Prof Spector’s comments and said that “while we may have passed the peak we should not become complacent”. 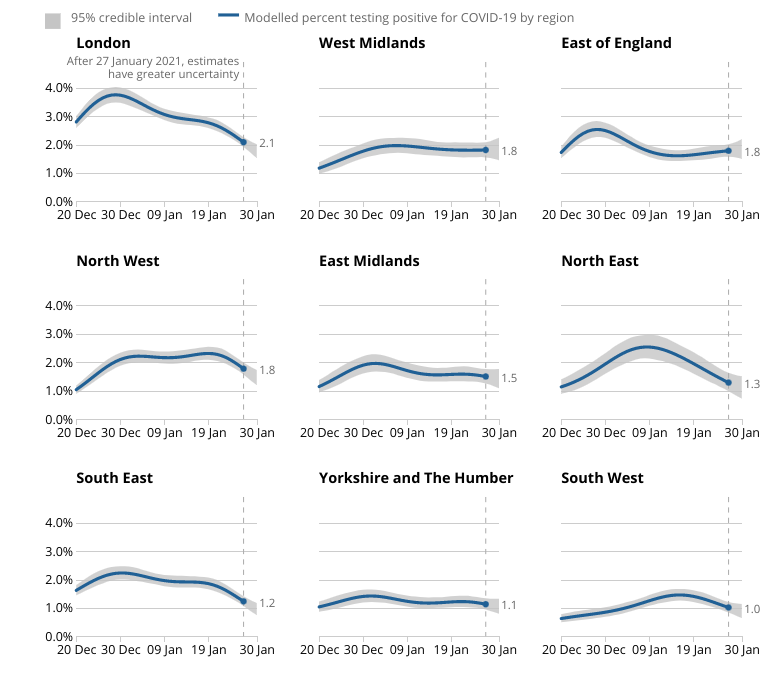 Data from the ONS shows that cases are dropping off in all regions in EnglandCredit: ONS

She added: “However encouraging it is that case rates and hospitalisations continue to fall across all age groups and regions, it is important to reduce the level of infection in our communities because the rates remain very high.

“Dropping our guard at this stage could waste everything we have endured over the last few weeks.

“Please remember around one in three people with the virus do not show symptoms – but can still pass it on and make others seriously ill.”

Data from the ZOE Symptom Tracker app also revealed that the R rate is at 0.9 across the UK.

This is different from estimates from Sage which are released every Friday afternoon. 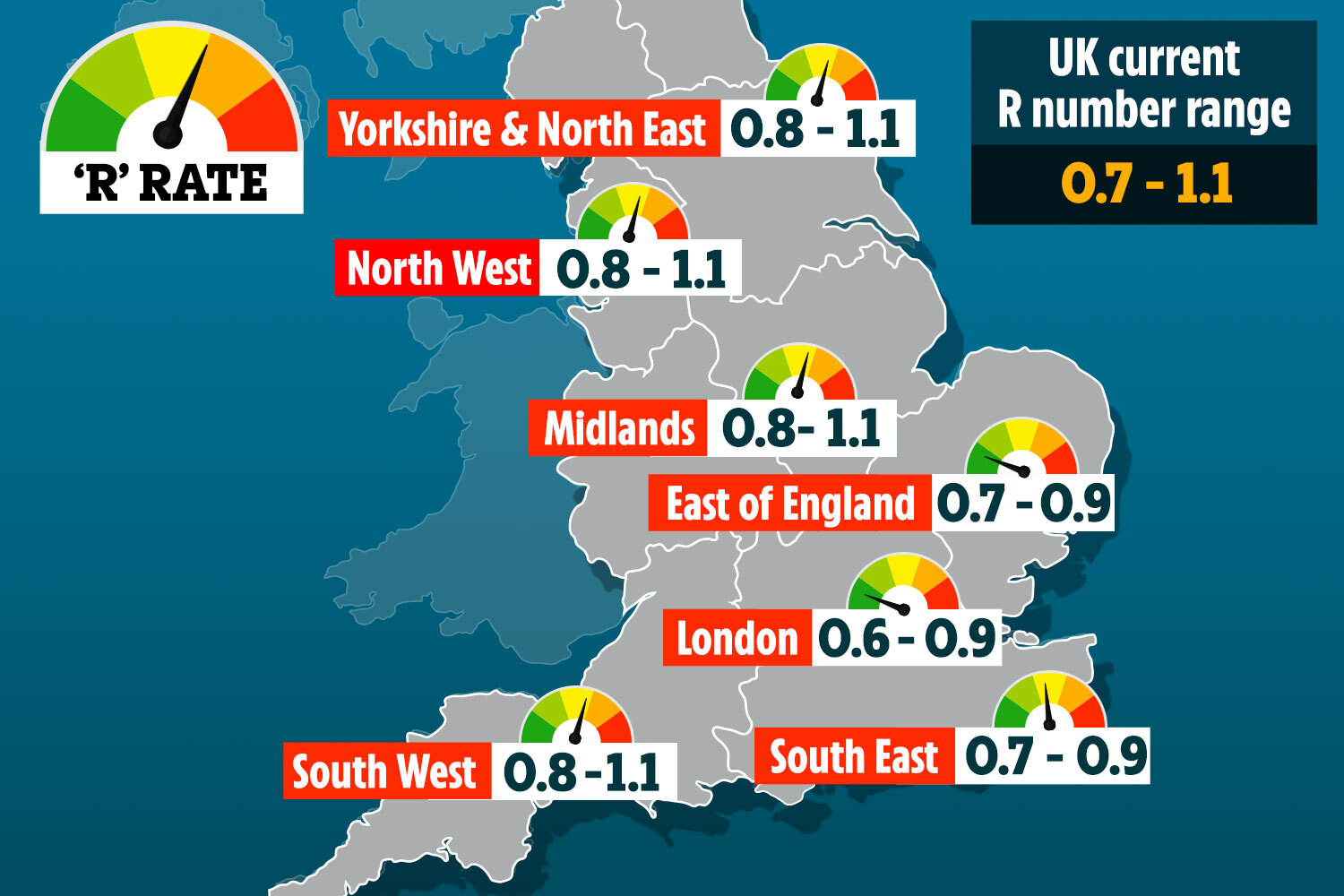 The estimates above are based on modelling from Sage

Current estimates from Sage suggest that the R rate is between 0.7 and 1.1 across the UK.

Data from the ZOE study suggests that the R rates is highest in the East Midlands – with a value of 1.0.

The experts stated that the R rate across all regions are more similar than they have been in many months.

However data from PHE shows that Sandwell in the West Midlands has the highest rate in England, with 1,698 new cases recorded in the seven days to January 31 – the equivalent of 517.0 cases per 100,000 people.

The ZOE experts added that cases are coming down in all age groups.

Prof Spector said that if these trends continue then children could be back in the classroom sooner.

Prime Minister Boris Johnson has vowed to set out his road map out of lockdown around February 22, with schools potentially opening their doors on March 8.

Prof Spector also claimed that vaccinating teachers should be the next priority.

So far in the UK more than 10.4 million people have received their first dose of either the Pfizer/BioNTech or Oxford/AstraZeneca jab, with nearly half a million having received their second.

The MHRA (Medicines & Healthcare products Regulatory Agency) set out a vaccine priority list which put the over 80s and health care workers at the top.

This is because they are most vulnerable to severe effects of the virus and because health workers are more exposed to the disease.

UK Covid deaths down a QUARTER in a week as 915 more people die and 20,634 test positive but child, 7, among victims