Covid cases plummet by a THIRD in a week with 0.9% of population infected

COVID infections have fallen by almost a third in one week, data shows.

The Office for National Statistics (ONS) estimates that 481,300 people had Covid in England in the week to February 12, the equivalent of one in 115 or less than one per cent of the population. 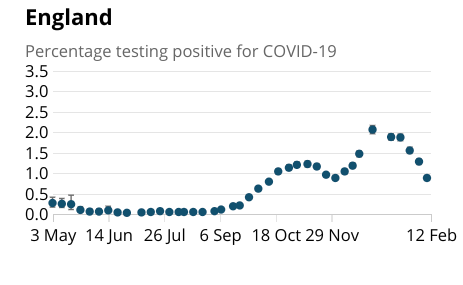 Cases are continuing to come down, according to the Office for National Statistics

And it is the lowest figure since November 29 to December 5, when the estimate also stood at one in 115 people.

The promising data is yet more proof that the Covid outbreak is shrinking, and bodes well for this weekend when the Prime Minister sets out the “roadmap” out of lockdown.

Boris Johnson’s announcement on Monday evening is set to reveal schools will open on March 8, and the reopening of non-essential shops will follow in a “cautious” move to lift restrictions.

The Office for National Statistics (ONS) Infection Survey swabs thousands of people every week to track the outbreak.

It does not give estimates of people in care homes, hospitals or prisons – only private homes.

It found that North-west England had the highest proportion of people of any region in England likely to test positive for coronavirus.

Around one in 85 people in the region were estimated to have had Covid-19 in the week ending February 12. 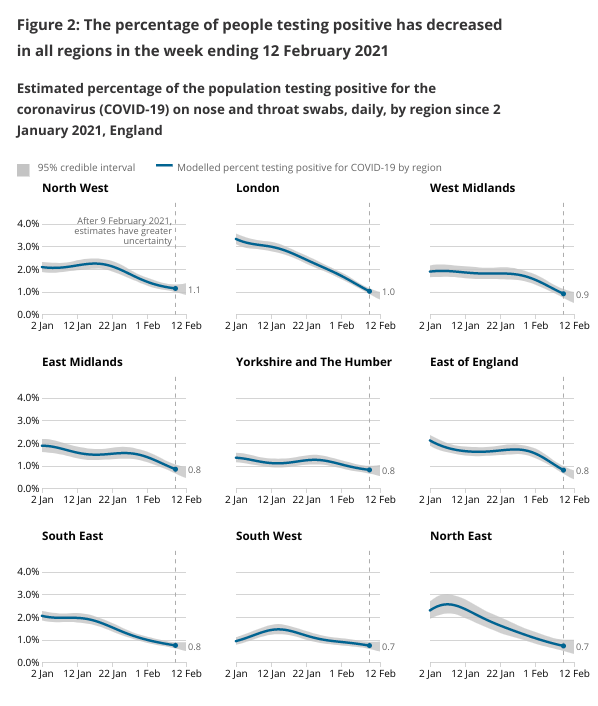 How prevalence of the coronavirus has come down in each region 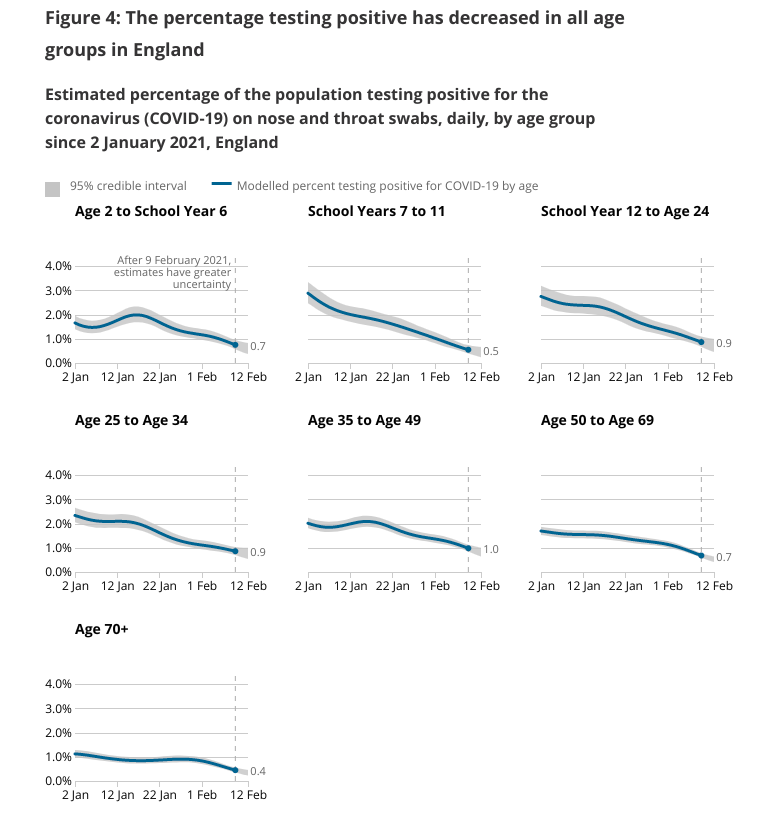 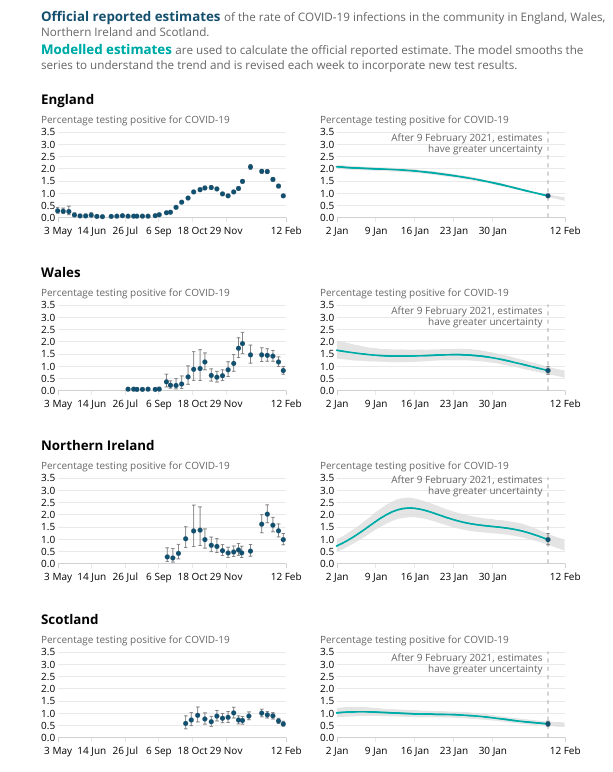 Estimates of the coronavirus in each country

In Wales, around one in 125 people are estimated to have had Covid between February 6 and 12 – down one in 85 for the previous week.

In Northern Ireland, the ONS estimates around one in 105 people had Covid between February 6 and 12, down from one in 75.

The estimate for Scotland is around one in 180 people, down from one in 150.

A long way to go

The data adds to a slew of research finding a continued drop in cases over several weeks.

Yesterday, figures published by Public Health England (PHE) revealed that 99 per cent of areas have witnessed a drop in infections in the past week.

And data from NHS Test and Trace show that there has been a 29 per cent drop in positive Covid cases.

Despite this, experts say there is still a long way to go.

Sage has said the prevalence of the virus needs to be more like 50,000 a week – ten times lower than the ONS says they currently are – before the PM can consider easing lockdown.

That’s according to NHS Providers chief executive Chris Hopson, who said on Wednesday there was a “pretty clear view” that “number needs to come down to around 50,000”. 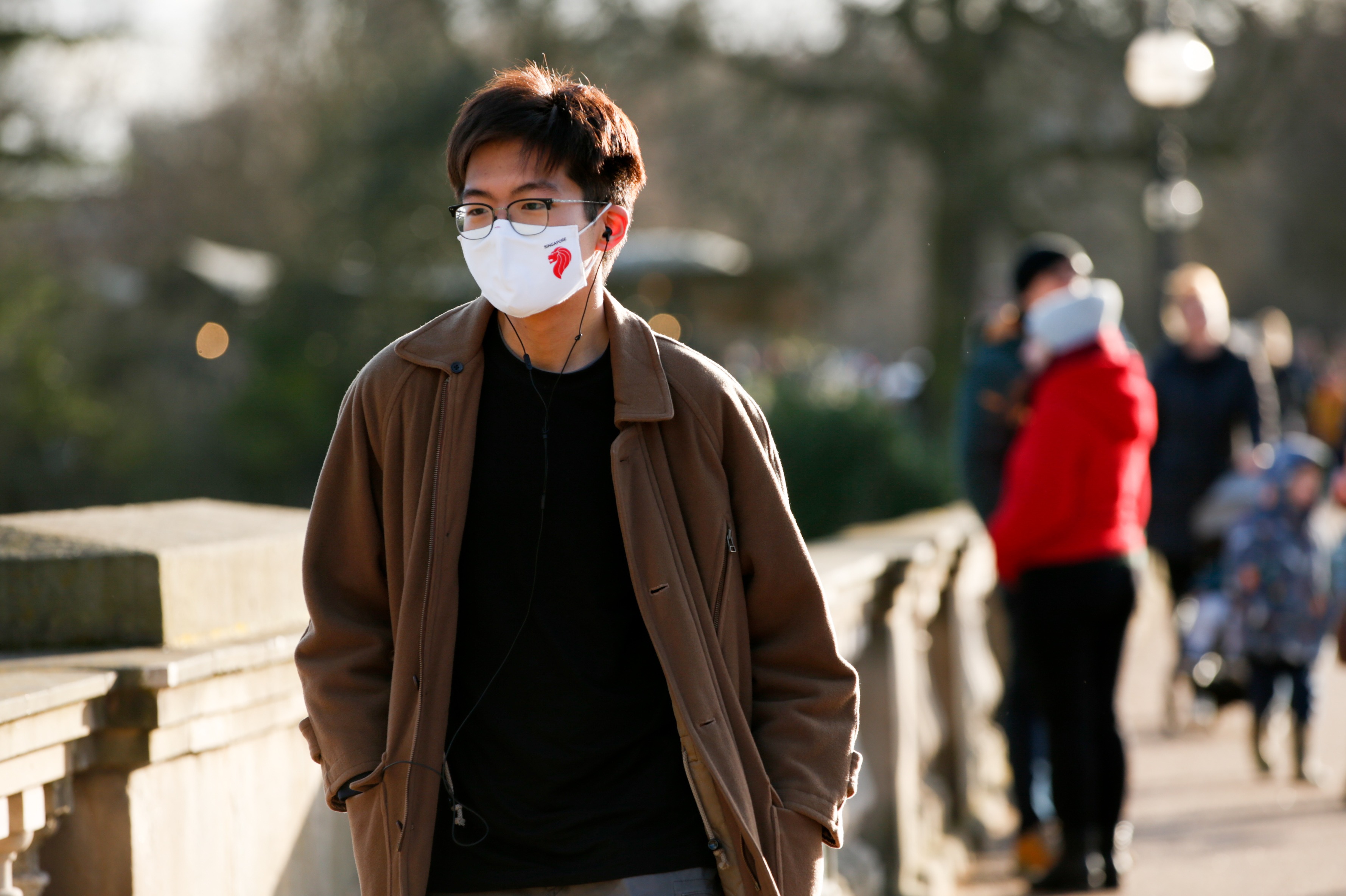 Experts say there is still a long way to go before lockdown can be liftedCredit: Rex Features 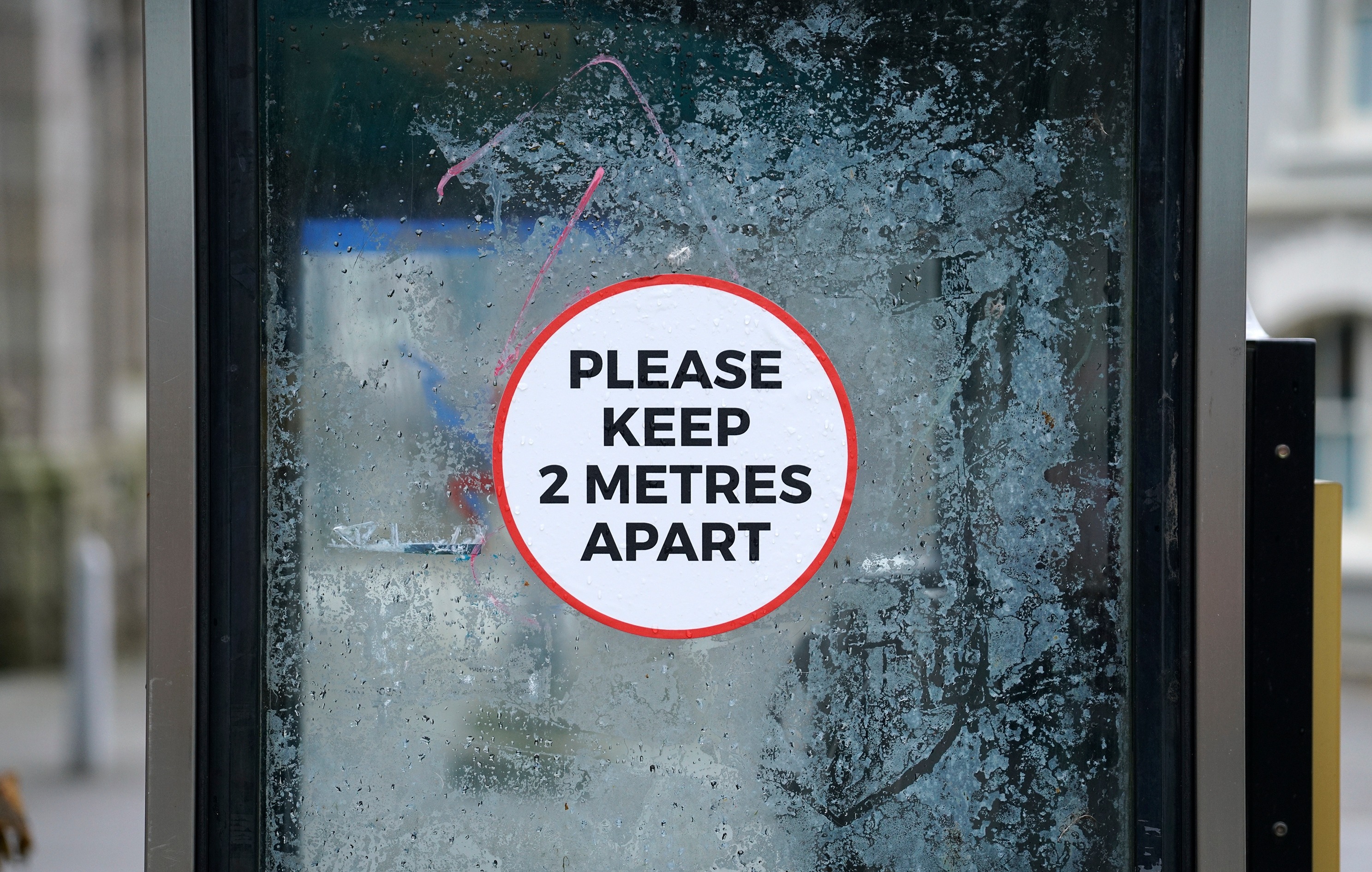 The Prime Minister will announce a “roadmap” out of lockdown on MondayCredit: Getty Images – Getty

The React study, by Imperial College London, found that lockdown had caused cases to plummet by two thirds.

Around 52 people per 10,000 are testing positive for the virus now, which is similar to the rates we saw in September last year.

Scientists hailed the plummeting cases as “really encouraging” yesterday, but warned pressure on hospitals must ease before we unlock the country.

Meanwhile, the researchers of another study tracking the outbreak using app data said the pace at which cases are falling has stalled.

According to the ZOE COVID Symptom Study UK Infection Survey figures, there are currently 14,064 daily new symptomatic cases of Covid in the UK on average.

This compares to 14,818 daily new symptomatic cases a week ago, a decrease of only five per cent.

The data only include people who report symptoms to the app, therefore missing any asymptomatic infections.

Professor Tim Spector, an epidemiologist at King’s College London who leads the study, described the trend as a “hitch” in the progress to beat Covid.

Since the peak of 69,000 daily new cases around the 1st January, cases have fallen by around 80 per cent, according to the app.